Is this normal for Geneva 41?

I just started working with g41 this spring. Trees grafted on 41 have put on about as much growth as trees on m111.

I dug up a few trees on g41 today that I benchgrafted this spring with next to zero roots. The grew 4’+ and developed a nice root system.

Could these be fruit buds😮??? 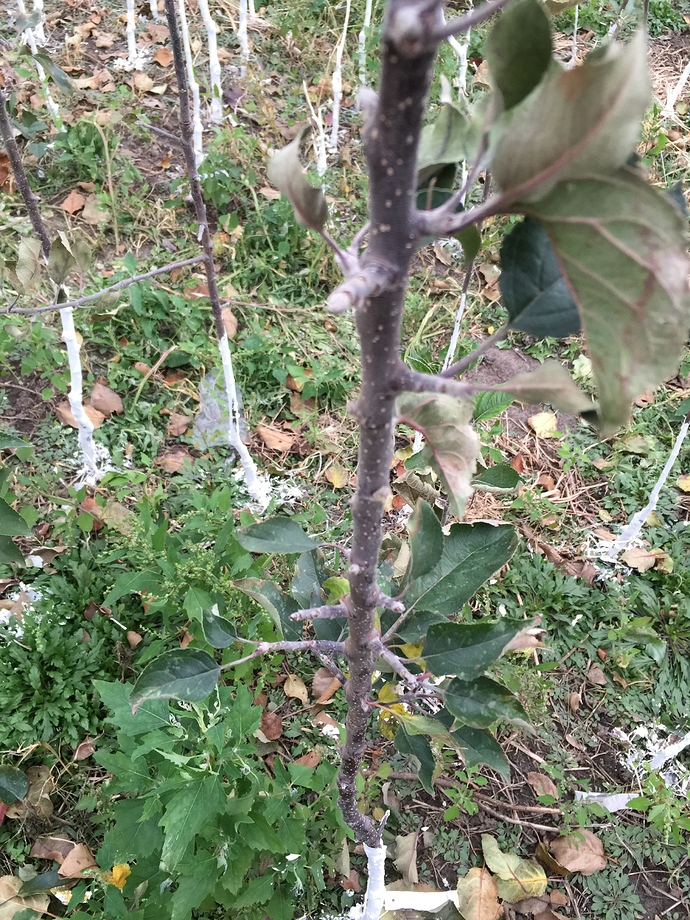 Those do look like spurs rather than branches. They could have a flower bud at the tip. You’ll know next spring.

That would be crazy! A one year whip trying to set fruit.

What variety is in the photo with spurs?

Amazing growth. I see some G41 rootstock in my future

I have 2nd year trees here in Orange County, CA. Half on G41. I will pick my first apple this November, a King David on G41. So far, I’ve done very little training and the branches seem to grow out instead of up. I am surprised at how well it has tolerated the heavy clay soil.

Mine are like that too. Good growth till they fruit and pretty much stop after 2-3 years.

Since people talked about G 41, I want to show mine.

I have my Fuji on G41. Since it is a dwarf rootstock so I used a 8’ ft metal pole as support. Due to rocky soil, I was able to get the pole down to about 2-5 ft. I secured the pole base at the bottom of the hole with rocks. The tree has grown well and produced fruit early.

It was fine until this year when the tree set a lot of fruit. Fuji is a laarge apple. Last month the tree started to lean and push the metal pole out of its position. We took the pole out and staked the tree.

Last week, we saw this. 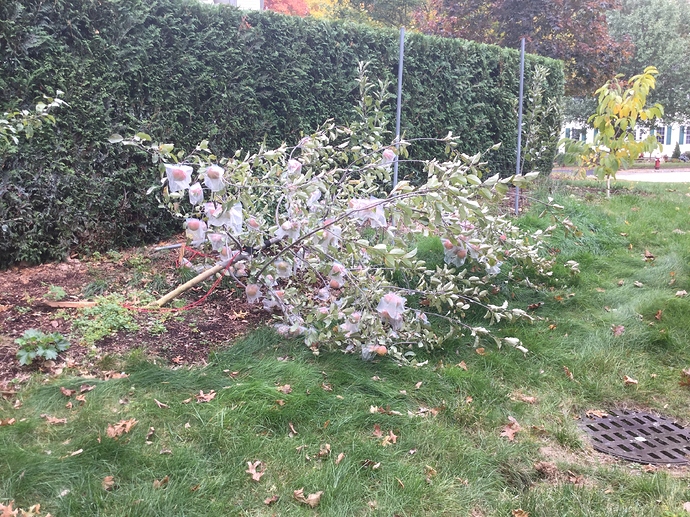 So far, we have not done any thing. A friend suggest we let it be until the apples ripen and pick them. That way, the tree will be light when we erect it.

Oh, no. The roots can’t support the weight of the tree. Leave it as is till fruits ripe and leafs fell then replant/straighten the tree

Well, Appleseed70, I’ve not ordered rootstocks of G41, but I did order two trees on G41 and two trees on G11 from Cummins two years ago. One of the G41 still lives, but barely saved it from drought. They had quite a bit more roots than your picture. I lost the others by only watering once a week.

but, I’ve gotten a few G202, G30, G890 where one or two of a bundle of 10 would have no more than the root in the picture. The odds of it dying the first year are greater than with a well rooted one, but sometimes they do indeed grow and turn out OK.

Since M9 offers pretty much everything except “replant” disease resistance…
and Since B9 and B10 offer more winter hardiness…
I can’t think of any reason I’d order G41 or G11 rootstocks.
(Unless I was immediately planting an orchard back where I’d dozed out large OLD apple trees.)

The Geneva roots cost $1 more per each one than M and B roots.

So, no more G41 or G16 or G11 for me…unless I want a variety bad and the only nursery in the USA that has it is Cummins and they have it only on one of those three roots!!!
.

Geneva rootstocks are highly fireblight resistant, however M9 has low to none. B9 and B10 also have high resistance.

A dollar per stock royalty isnt bad for fireblight resistance. I think ill stick with my Geneva 890, G41 and G935.

Yes, for the M-7 sized apple rootstocks, there the Geneva stocks make a lot more sense than in the G41 for the backyard grower. I grafted several G890 and G202 myself last spring. Along with B9, B118, and Antonovka.
Besides B10, I’m hoping a few more from Russia may become available in due time.

With all the deer problems, seems a tree the size of M111 or B118 or Antonovka makes more sense unless you have a fenced yard…at lest in most of the Eastern part of the USA.

I am in the process of planting a few acre orchard that will become a upick when i retire. I am planning on putting in a single row of G41 on a trellis, and then going with G935 and G890 for the rest of the trees. Will have around 500 trees in when im done. If i were just sticking with some backyard trees, i would be putting them on B9, as they are less likely to breaking at the graft union. G41 has shown weak graft unions on varieties like HoneyCrisp.

I’d like to hear back when they begin having first fruit in the orchard…how your plan panned out. Particularly how the G890 serve your needs.

My Fuji on G41 fell over just like yours. Mine were on a 4 wire trellis but snapped a 5 inch CCA post with a heavy crop load during a high wind event.

All my trees on G41 grew quickly with very few problems but they are going to require a beefy trellis to support them. If we re-plant we plan to use H braces at the end of the rows with a line post every 25 feet

Do you know the approximate wind speed? Was the wind coming from a direction other than your normal wind direction? Were your wires stapled to the posts or drilled through?

I am planning on putting in a trellis system for some g41 that i am growing and though i am planning for many different scenarios, its always good to keep all possible circumstances in mind.

Do you know the approximate wind speed

Probably 50-60 MPH gust. Left over winds from a hurricane in the Gulf. Same wind direction as normal

Wires were stapled with barbed staples which held up fine.

Never had a trellis failure on any of the 800 B9 trees but they never grew as tall or got as big as the G41 trees. Our trellis was built from 12 foot 4/5 CCA post as deep in the ground as we could get them with a tractor auger (about 2 1/2 - 3 feet) with a “deadman” post 3 foot in the ground with 80 pounds of concrete with a wire at 45 degrees supporting the end posts.

We plan to use “H” braces like a high tensile fence next time. I noticed that Cornell beefed up their suggestions for trellis for high density apples too.

Thanks for the extra information.

That’s what all my 41’s looked like too. Snapped at the graft union.