I would also question why Autumn Beauty is such a goal. I’ve gotten a number of trees from this grouping:

1 of the 2 AB from JFaE looks to be mislabeled (just a rootstock). One of the 3 Alcalde #1 died (possibly tenant related). Of everything else, the Mango Dong Zho and one of the Autumn Beauty from JFaE are the only ones which have fruited. Most of the list is from 2018 and 2019, with one Alcalde #1 from 2020.

The fruit from AB and MDZ matched, but the MDZ produced more. 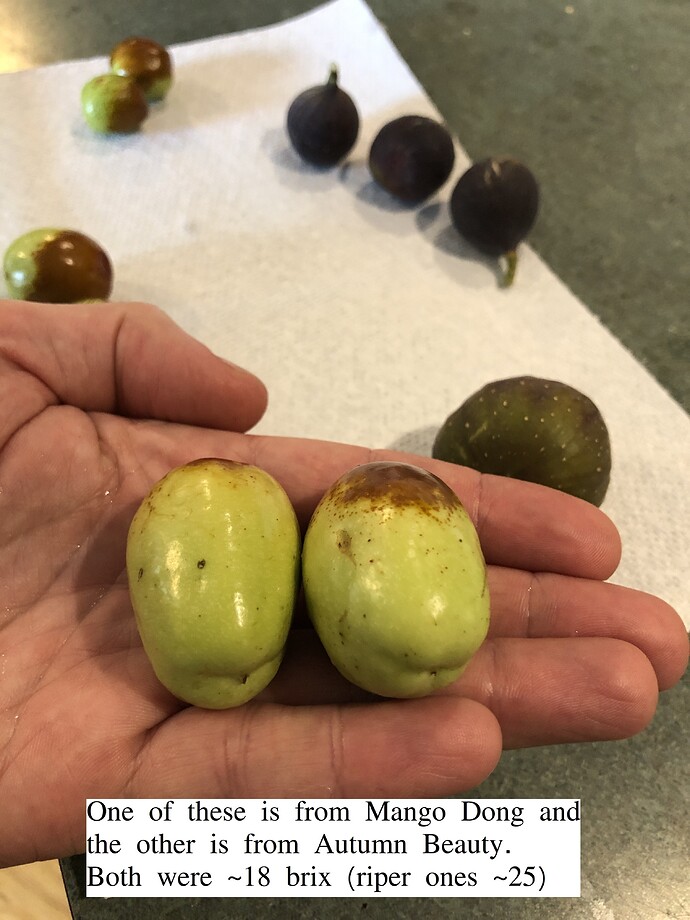 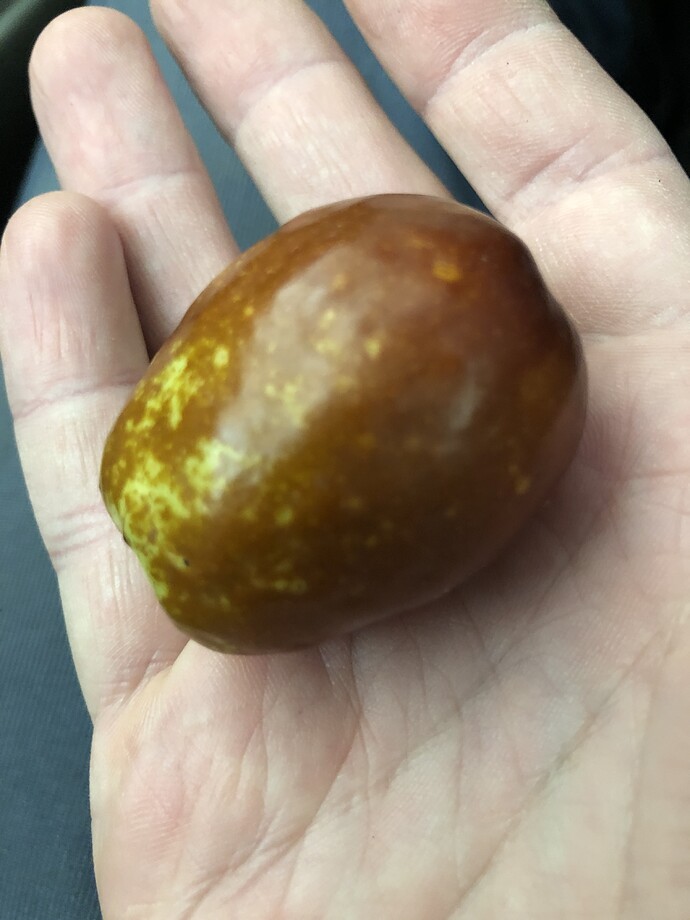 While large, I wasn’t all that impressed with either. Their texture was OK, in the Xu Zhou class- not really crisp and juicy like Honey Jar or Sugar Cane.

If you do end up ordering from Chinese Red Date, I’d suggest Russia #2 and Maya (and of course Honey Jar). Both seem more precocious and have crisp tasty fruit. The fruit size is smaller though.

did the autumn beauty from OGW turn out to be correct? AB was it early as nurseries described? i think my cut off ripening time would be sugar cane and honey jar. anything that ripens later than them then it just wont do well in my area. Li barely ripens well HJ and SJ does well. i cant seem to find a large size jujube that will ripen. only the medium size jujubes ripen in time.

Autumn Beauty is the goal because it can mature large fruit very early, the fruit is very crisp and has excellent flavor.

Having said that, cultivars perform differently under different growing conditions. Autumn Beauty does well in both the hotter and cooler regions of California, and does very well in New Mexico (as Alcalde #1). I haven’t seen much reporting from areas with high humidity or summer rainfall.

The fruits below are Autumn Beauty from central California, where the summer nights can be too cool to consistently mature GA 866 fruit. And yes, the quality of the fruit is equal to the size. The fruit was always very crispy. Autumn Beauty was always in my top 5 jujubes every year and usually in the top 3, and that’s out of 50+ cultivars. 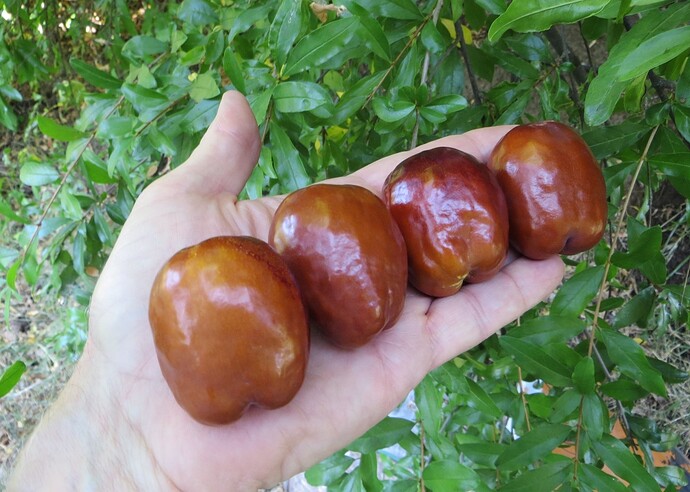 Hot and humid report here. I have Autumn Beauty and Alcalde # 1. Fruit is very similar and ripens about the same time here. Alcalde tree (mine anyway) does not exhibit the thorns that AB does. My Alcalde tree has been more productive than the AB. This year both are loaded with blooms. The fruit here is not as crisp or as sweet as honey jar but much better than Li in my environment. It ripens about 5 days later than honey jar……about the same as sugar cane—much sooner than Li. All in all I think it does well in the heat and humidity we have—much better than some of the cultivars.

Maybe 4 years in-ground and 2 years of harvests is a bit early to reach a conclusion, but so far Autumn Beauty isn’t very early for me. It is roughly even with Sugar Cane, starting in mid-late September.

But, now that I think about it, most of the larger jujubes are at least a couple weeks later. Dae Sol Jo may be the exception and is pretty close. 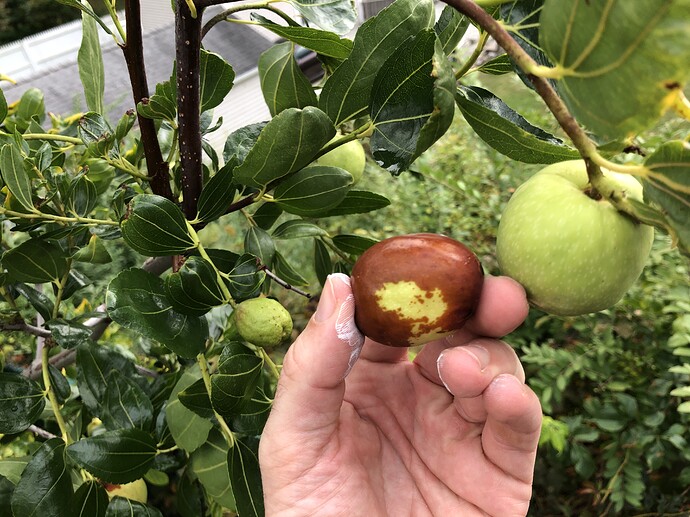 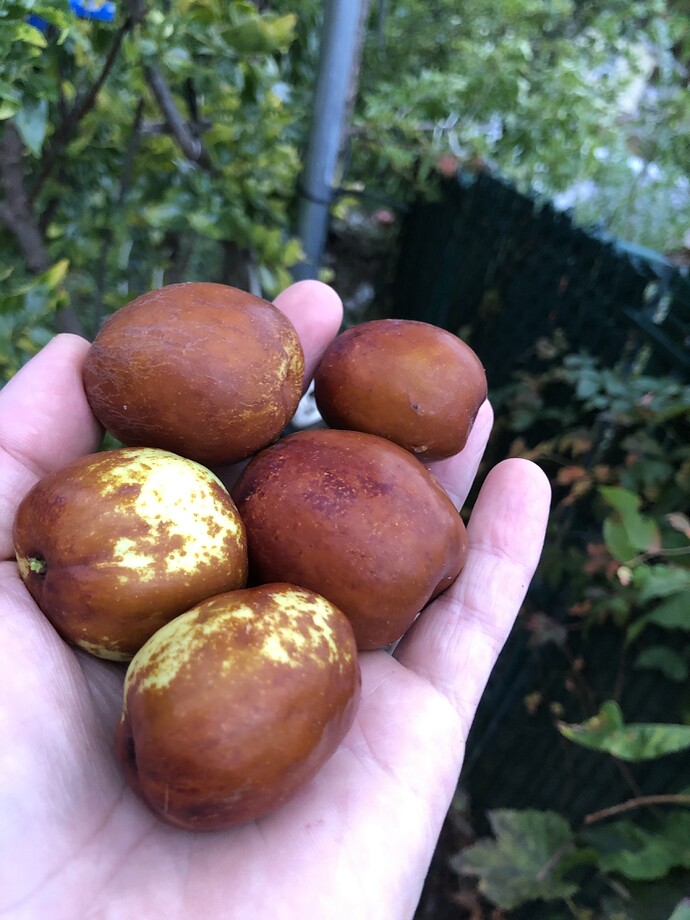 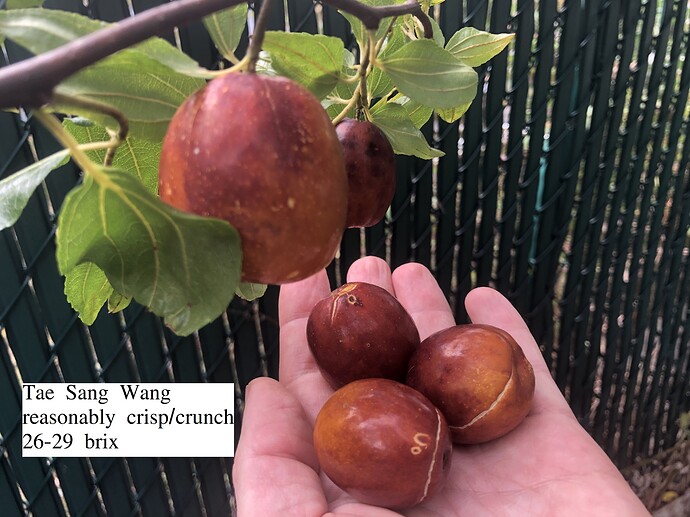 Shanxi Li has been growing on me as it ages, so it may eventually get to be good.

Autumn Beauty was always in my top 5 jujubes every year and usually in the top 3, and that’s out of 50+ cultivars.

I don’t like any of the big jujubes as much as the small ones like Honey Jar, Black Sea, Russia #2, Maya, etc. Small ones have always filled out the top 3-5 spots. I’m not sure if I’ve gotten production from 50+ yet, but I’m somewhere in the 20-25 range. 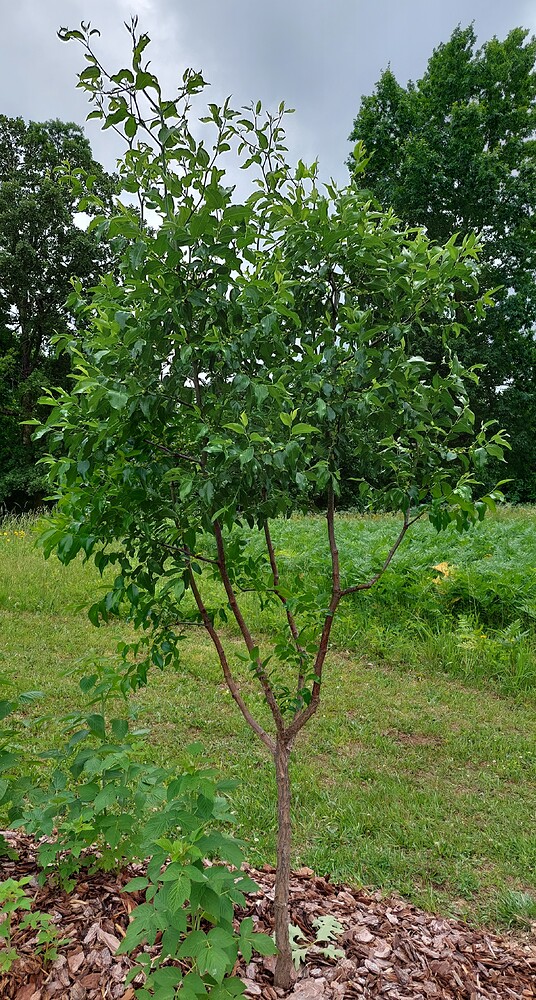 My Shanxi li zone 7a TN.

Close to 9 ft tall now and i pruned it to remove height early Feb. It wants to go tall.

Maybe Hetian Jade is a better alternative to Autumn Beauty. Hetian Jade tasted better than Li with no thorn and 4 to 5 times larger than Honey Jar but Honey Jar is a bit more Flavorful according to Pharmerdrewee. The Heitan Jade jujube scion source is from Cliff England.

Maybe Hetian Jade is a better alternative to Autumn Beauty. Hetian Jade tasted better than Li with no thorn and 4 to 5 times larger than Honey Jar

Nice- I grafted it this spring and have at least 2 takes on my large Shanxi Li. 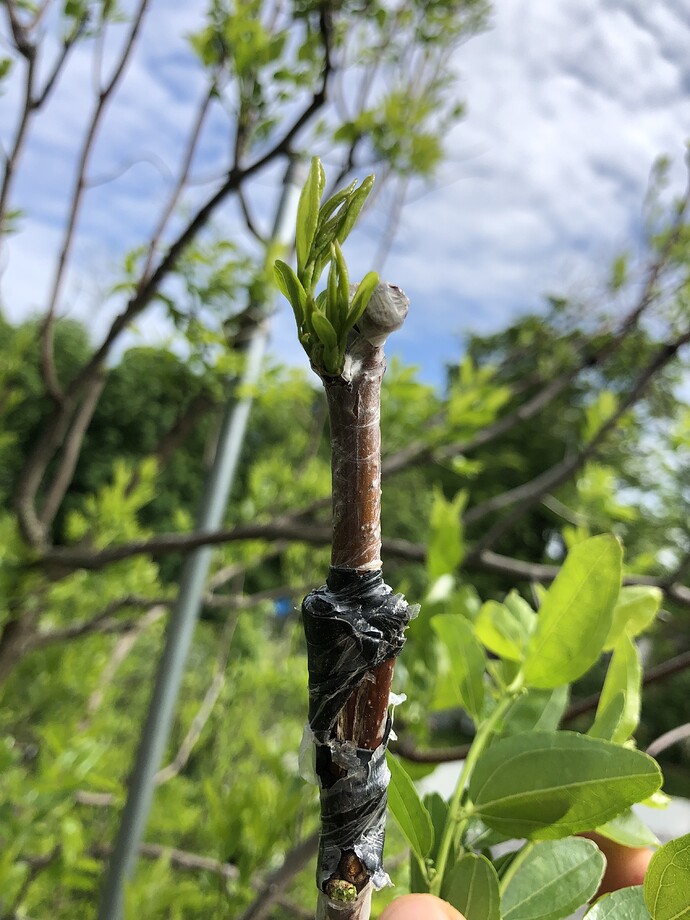 Mine has not taken yet!! My jujube grafting skills are deteriortating!!

Mine has not taken yet!!

That’s a benefit in grafting a bit earlier in the season. You can get growth which is only a bit behind the rest of the tree. 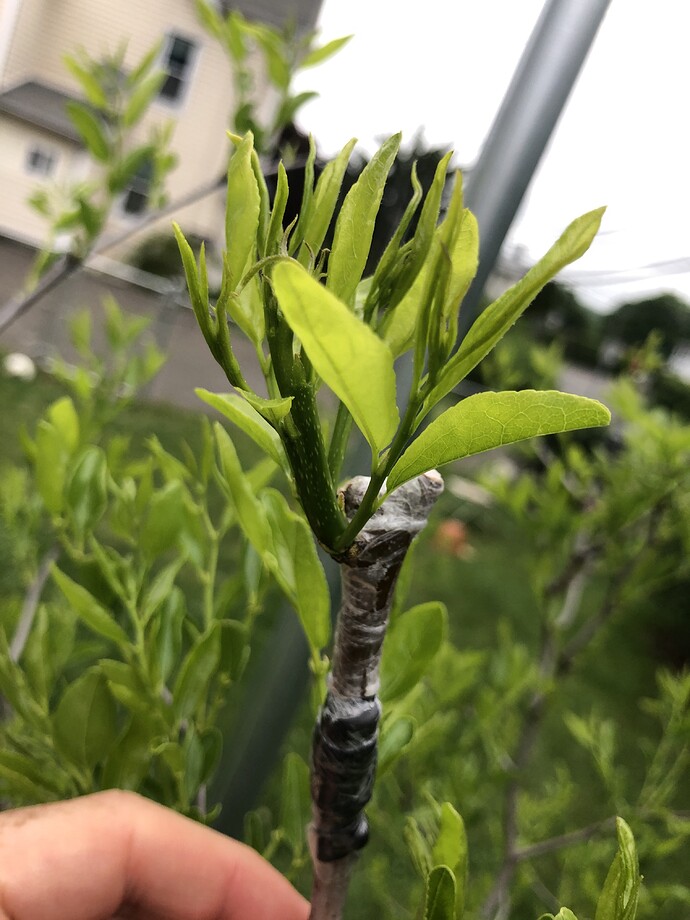 And for comparison, here is how much growth an un-grafted branch (Redlands, I think) has put on: 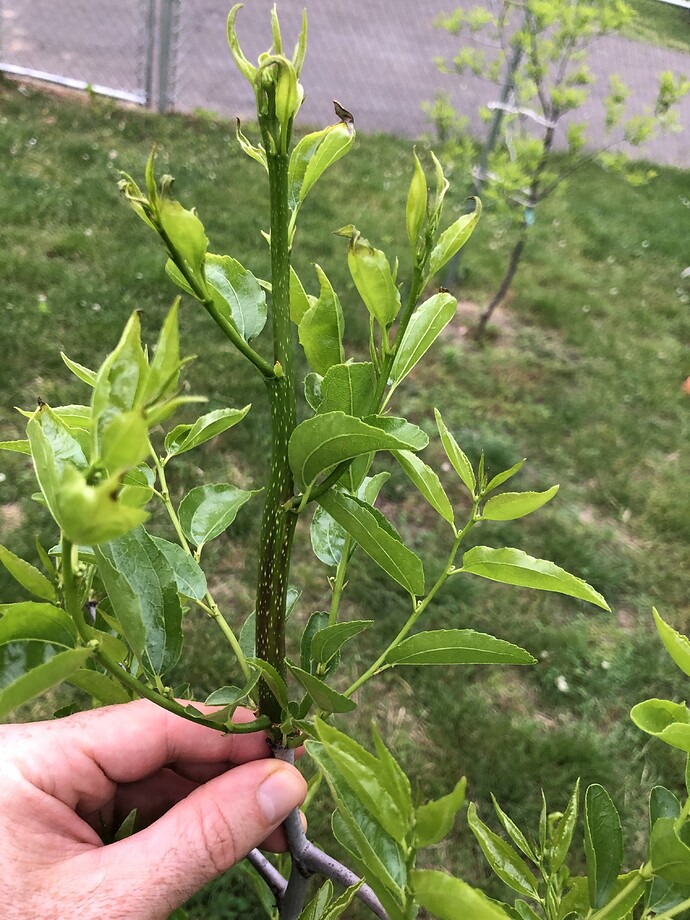 I’m still making a few grafts, but most from the last week have been persimmon or pawpaw. Just a couple jujubes, which will probably take a couple weeks to leaf out.

I started grafting jujubes when the green fuzz ( new growth) started to show. That was as early as I usually have done. Somehow, those grafts have not shown signs of takes. Very disappointing this year.

They will be just fine. They probably needed more heat to buds out.