Extensive drought in Europe from March till July has made an impact on my jujube trees. Fruit set was good but fruitlets have stopped developing until the first rains in August. As a result they are lagging behind by 3-4 weeks and may not ripen up at all because of cold september. Some trees that managed to find some water in summer have a decent crop. Here Halina: 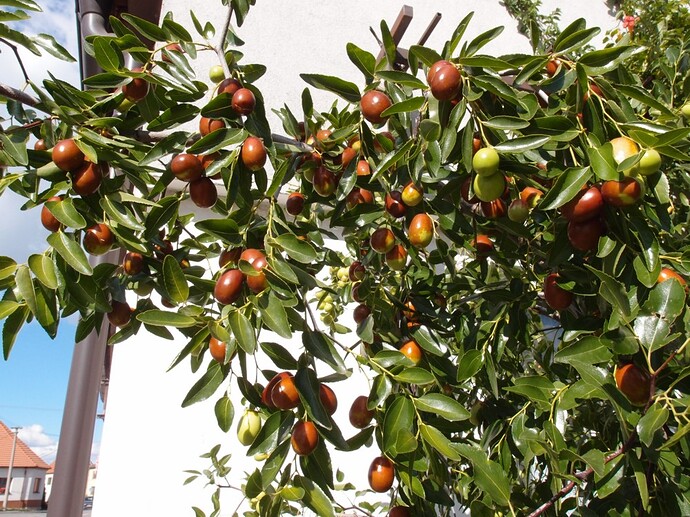 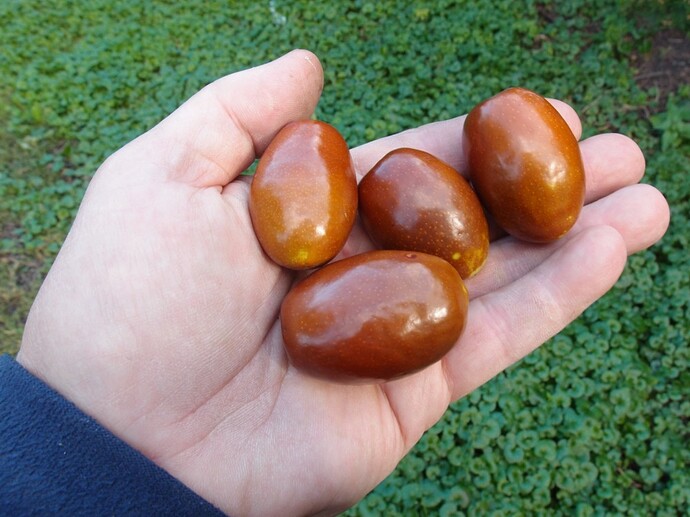 Your fruit did not crack bythe first rain after the drought?!!

My cracked badly even after the 2nd and 3rd rain. Today, I saw cracking on Shanxi Li for the first time. It has rained several times for the past two weeks.

No cracking this year, although we had a lot of rain recently. I think that it depends on timing: green fruit is usually not cracking, but if close to ripe it may do so.

Agree. My Sugar Cane was the closet to ripen so they crack 80+%

I don’t know what variety this is. It looks like SC but I never grafted SC to any of my jujube trees. 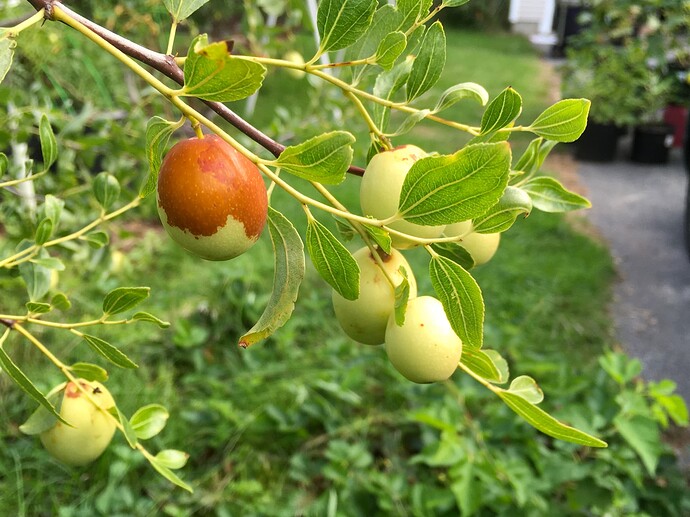 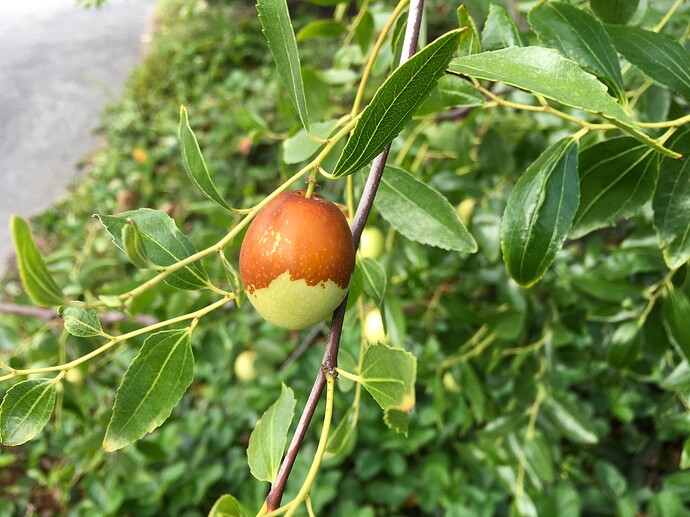 The fruit was sweet and crunchy. 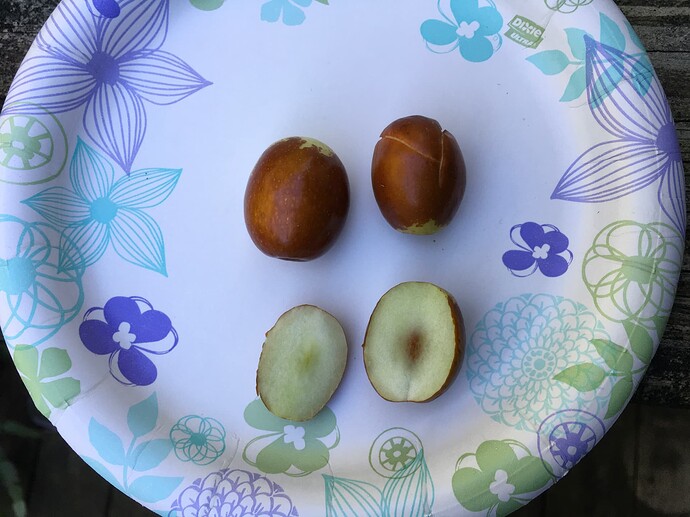 I sent OGW an email yesterday and they are holding my trees until Nov. After reading their shipment information carefully, I found out they ship by Fed Ex, which means they will deliver to the front door, my trees would be dying in the heat.
Good thing I ordered early when I browsed through their online catalog their jujube inventory is going down very fast. 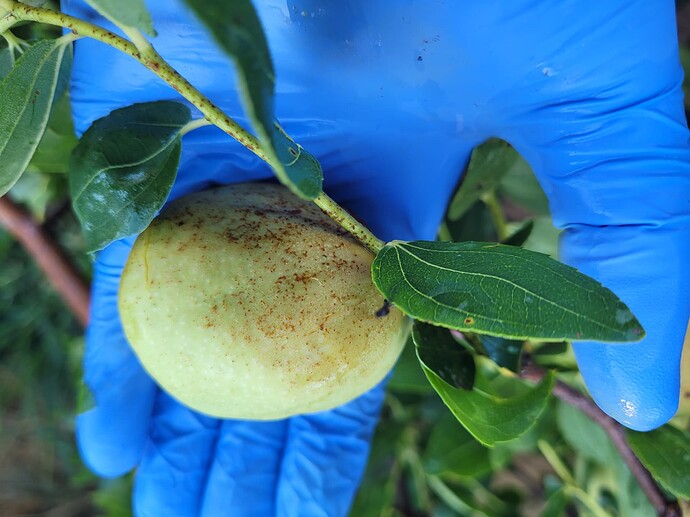 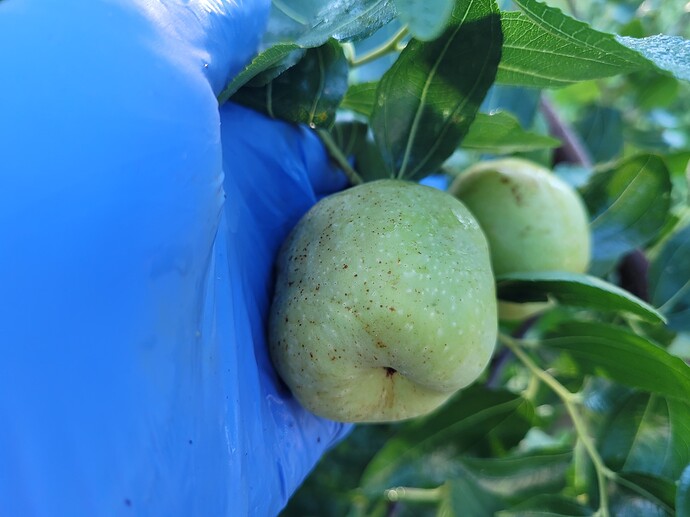 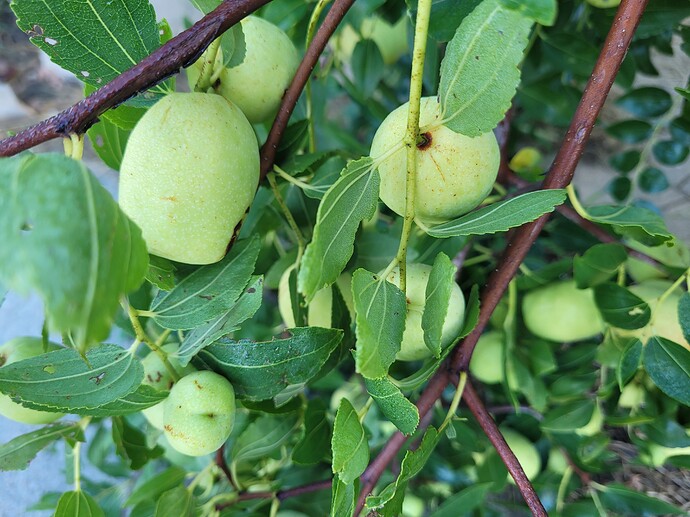 These are average sizes of each variety of my jujubes. 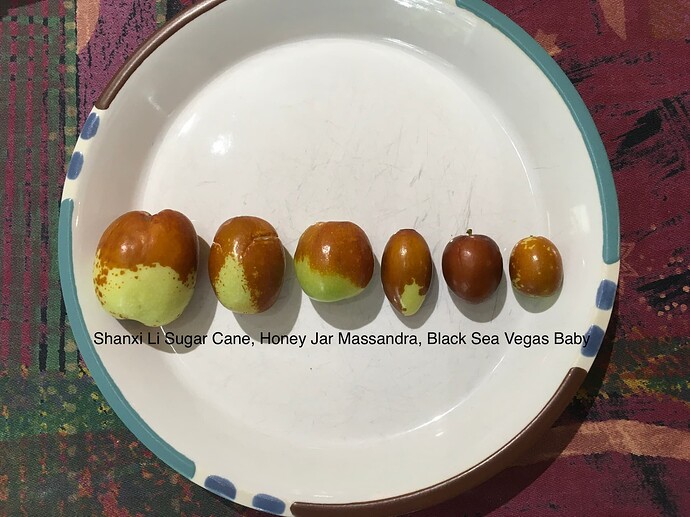 Orange Beauty is quiet large and starting to ripen now. 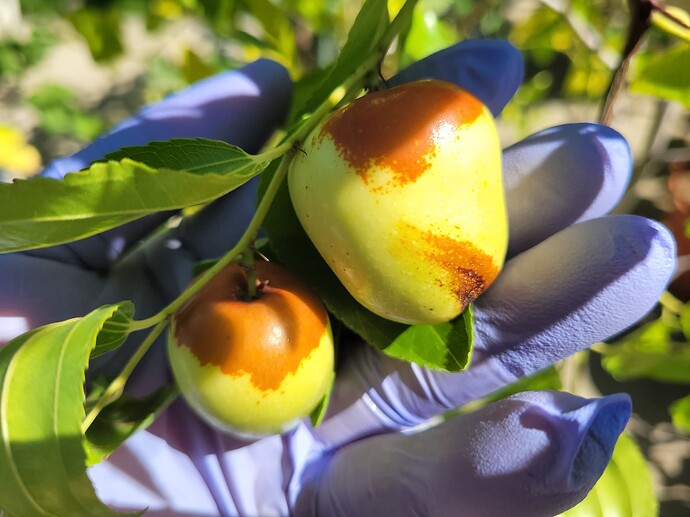 I had one the other day, the first I’ve had in a few years. It did not disappoint.

does anyone know any info like when does it ripen, flavor or texture and productivity of these:
pepper
moonlight
teapot
ying lo
nanji
hunan egg
board
goose egg
cool winter
gray
longevity
big melon

flavor or texture and productivity of these:
…
moonlight
… 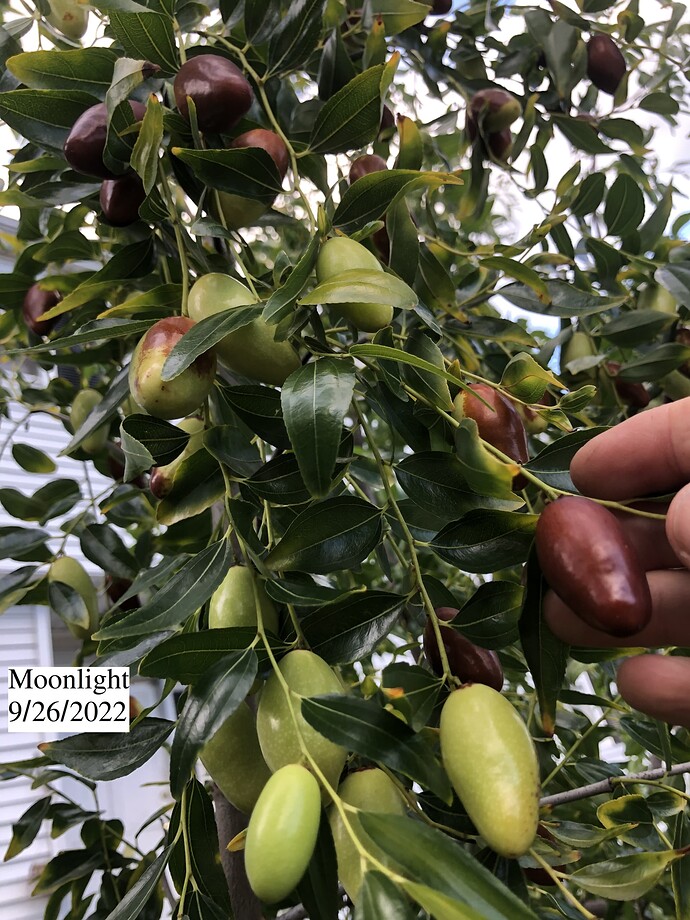 It isn’t bad, but doesn’t measure up to Honey Jar, Sugar Cane, and Black Sea. It has some juice to it, but is a bit denser/harder and not as light/crisp.

I was sampling jujubes with the family last night: 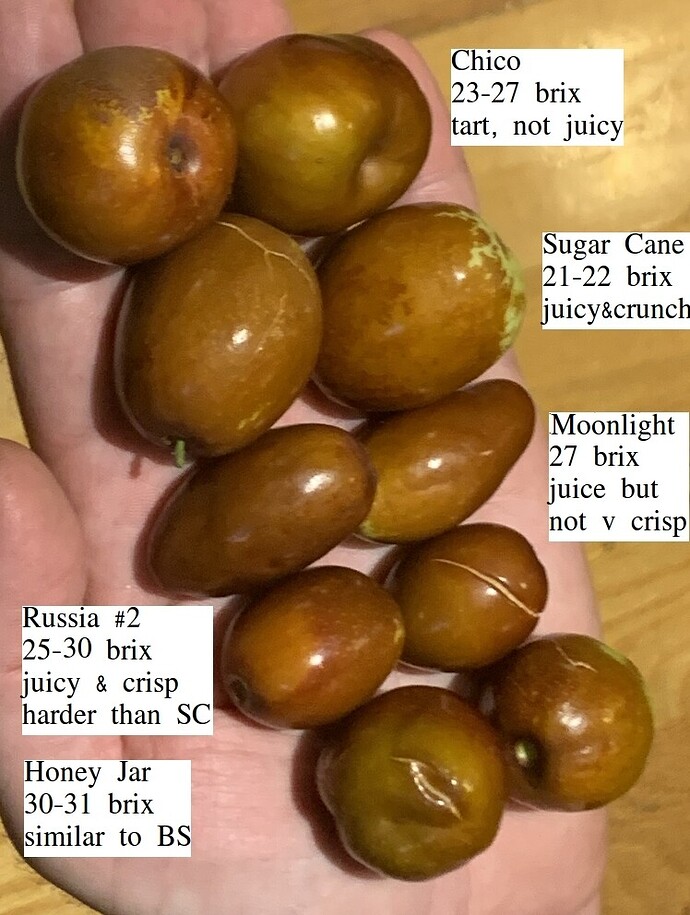 Me and one daughter liked Honey Jar the best. The other like Sugar Cane (by a lot), even though it had lower brix, I think due to the light, crispy texture. And my wife thought we were all spoiled prima donnas to be comparing and finding faults in such good fruit. She did admit that Moonlight wasn’t quite as good and she though Chico wasn’t great (kids didn’t like it at all) due to a dryer texture and more sour. But, even that “wasn’t bad and much better than what she gets in Chinatown”.

I picked 8 lbs of Sugar Cane from one tree at a rental, while 3 trees of Honey Jar are just starting and I only picked about half a pound. I picked another 1lb of Black Sea, which everyone liked, but was nobody’s favorite.

A lot more should be coming soon. This Honey Jar is in at least half shade, so it will likely be a bit later, but still has a surprising amount of fruit. Enough to bend the branches down. 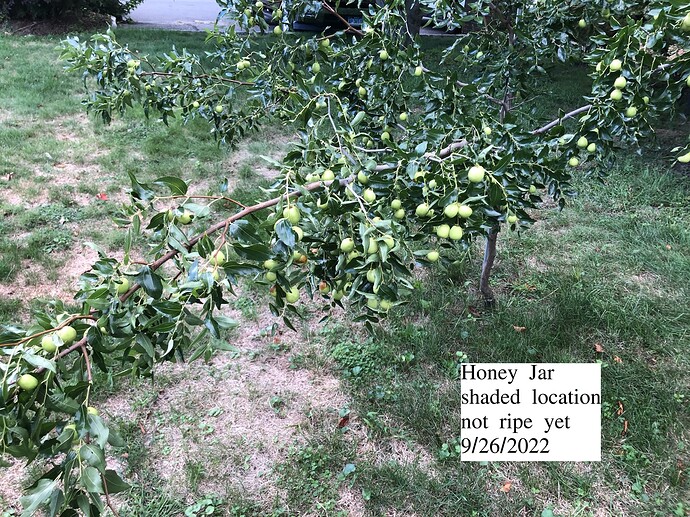 And this pic shows how Bok Jo is even more productive than an already productive Honey Jar tree: 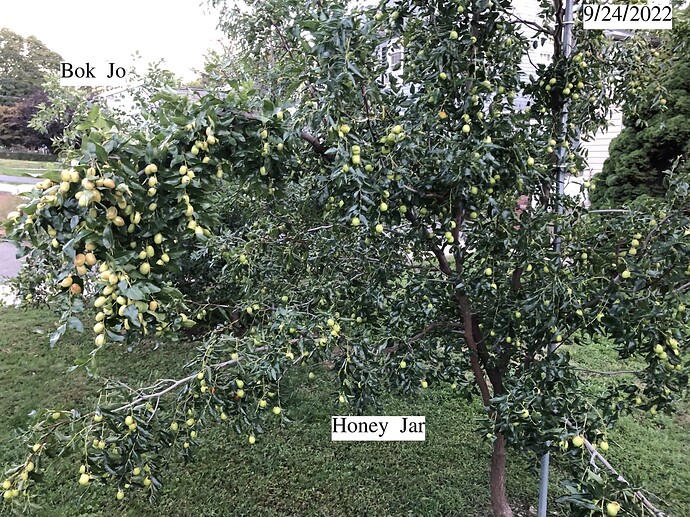 Fuicuimi is just starting to ripen. The daughter who liked Sugar Cane though highly of Fuicuimi (though to me they are pretty different) and called the texture “fluffy”. 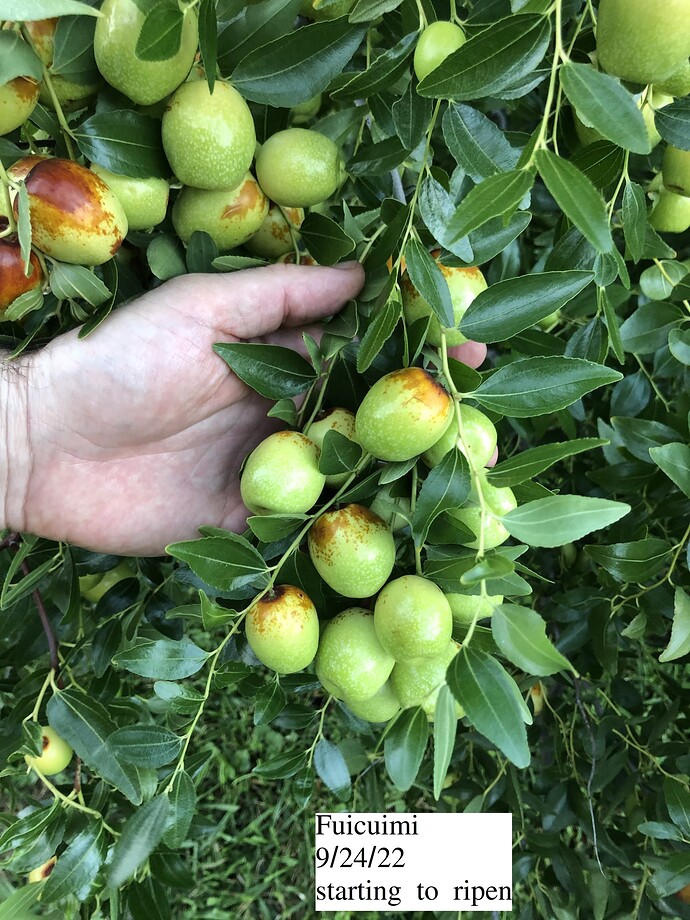 thank you so much! very helpful notes. i guess im looking for a pointy sort of jujube that is comparable to the flavor of crunchy of HJ and SC. blacksea isnt as long and pointy shape that fit that profile. i cant grow tiger tooth or ga866 in my location. do you recommend like maya or massandra? or something else?

You should try Massandra. It is long and pretty sweet and tasty with a crunch.

thank you someone said maya and horse tooth is the same
but i only seen maya and massandra sre quite similar
anyone heard of horse tooth? its late ripening variety and tasty

im looking for a pointy sort of jujube that is comparable to the flavor of crunchy of HJ and SC. blacksea isnt as long and pointy shape

Mei Mi could be one to consider. It is long enough, but I’m not sure if it is pointy enough, though I don’t know why that is a feature. I actually find the pointy pit to be a negative, as I try not to eat sharp rock-like shards of pit and the thin points make it easy to break off… 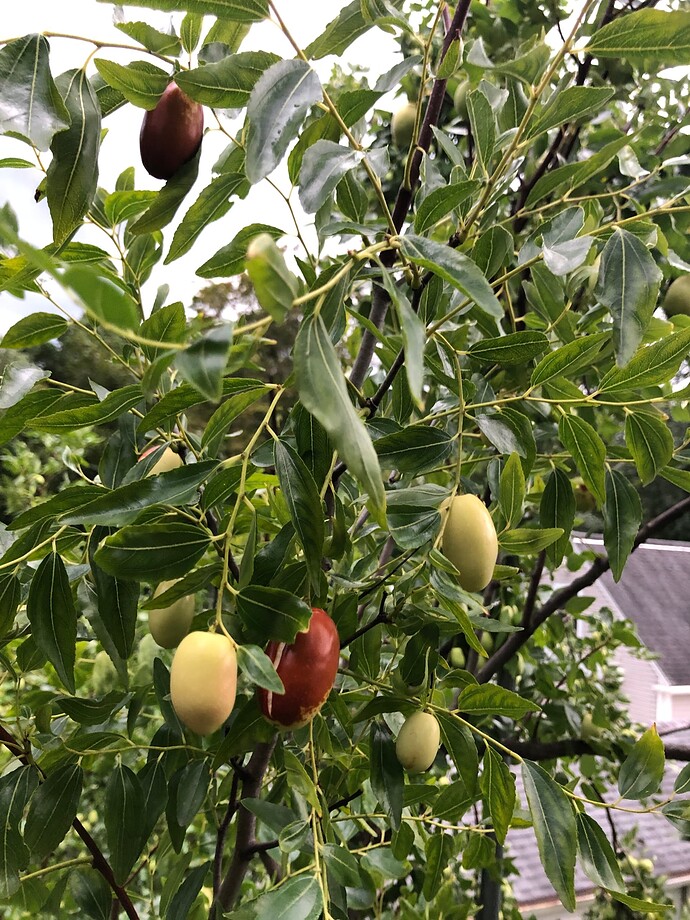 Another long one with promise is my new seedling. The first fruit was 23 brix, but it had just started to brown. I’m going to let the last one on the tree hang for a bit to see where it goes. In terms of fruit-size, it is larger than Moonlight (a graft on the seedling). 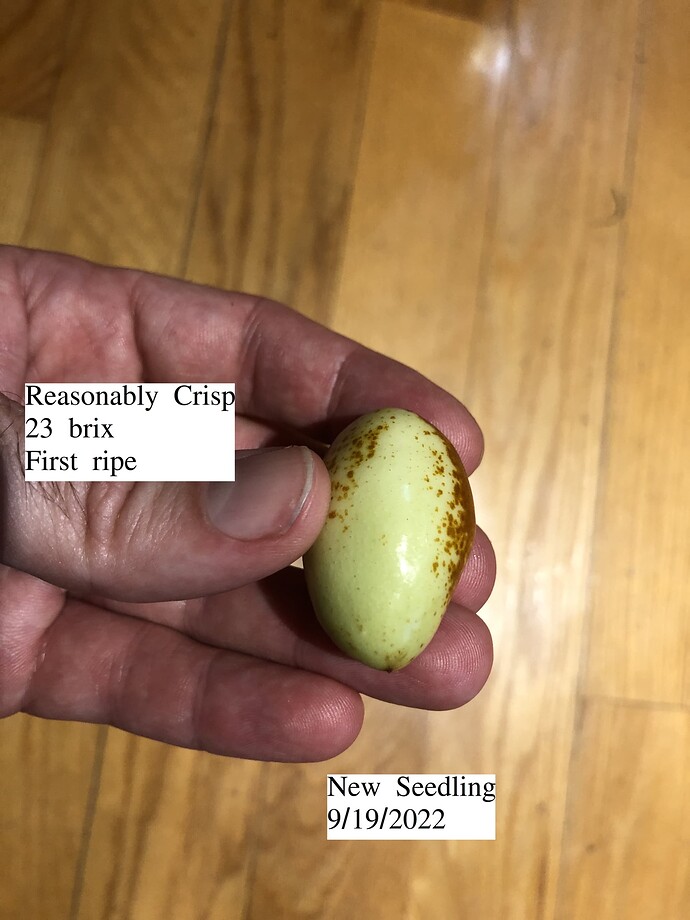 Tsao is another long one which is pretty good. Though the fruit size is down a bit this year and it doesn’t seem as crisp and juicy as I remember. 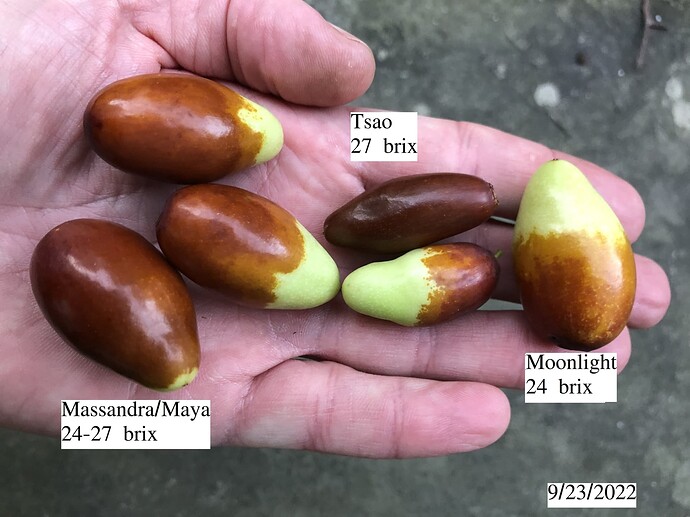 You should try Massandra. It is long and pretty sweet and tasty with a crunch.

It isn’t bad, but like Moonlight, it is a bit more dense than HJ and SC (especially SC). I generally like Massandra/Maya, but have been trying to figure out if it belongs in the top tier with HJ, SC, and BS. Right now, I lean against it and put it in the next tier down (still not bad…). Maybe in the next few days, I’ll do another sampling and compare it with the top 3 and Mei Mi.

i guess tha tsao is the right shape but it is quite smaller size than the maya. is the maya considered as a late ripening for you? is midnight the same as moonlight? new seedling looks good potentional too! how long does it take a seedling to fruit? and what variety did you get the seeds? im curious how does it compare to its mother cultivar. thank you

I think Tsao was a bit larger in past years, but don’t seem to be able to locate a pic. This is my only graft of it, so I don’t have any others to compare to.

is the maya considered as a late ripening for you?

No, we’re currently (with Maya ripening) at the early-mid point in the jujube season.

is midnight the same as moonlight?

That is me confusing the names. It should be Moonlight. I’m not sure why I’ve used “Midnight” for it several times. I updated the pic.

and what variety did you get the seeds? im curious how does it compare to its mother cultivar.

I’m not sure- I think it was 4-5 years ago and at that time I was mostly planting seeds from So, though it could have been Honey Jar and there’s an outside chance at something else, like Bok Jo or Sugar Cane. It was one of the samples I recently sent to Prof Yao, so the genetic testing may yield some clues.

ok cool im just think if for example you grew seedling from something with a longer pointed cultivar does the seedling have similar shape. becuase like you said you used cultivar of round jujube but it came out pointer/ longer and doesnt have the exact round shape.

i think the guy who is selling tbe horse tooth variety on FB is just telling people its maya. i dont think its is the same based on the ripening time.