You are the closest person to me.

I picked my Juliet cherries today. They weren’t as ripe as they could be, but the birds were causing a fair amount of losses and my netting is being used elsewhere. I’ll be making jam with them tomorrow.

Love those frames - it got too late for me to do netting, but want to do something like this for mine. It looks like you are fairly protected by weather - have you been able to experience how they do in heavy wind/rain? That is my biggest worry - that they get torn away and damage the bush - or the neighbors house…

We don’t have strong wind where I live. Top wind at 50 mph is hard to come by. My development is also surrounded by tall trees making them our windbreaker.

@BobVance, when did you pick your Juliet? You are the closest person to me.

I didn’t pick them. When I stopped by on 6/26, they were all gone. But even a couple weeks before, I think they had started to go. But none were ripe when I was there. Until that bush becomes huge (maybe with enough fruit to justify a net…), it will be ornamental.

I have a Juliet, but it is only a couple years old and has not fruited yet.

I’m picking my Juliet now. In fact I just came in from picking 3 gallons before dark. I’ve taken 8 gallons total so far.

I’ll take a few brix readings tomorrow, but literally EVERYONE who tastes them thinks they are way less tart than the CJ.

Our grand kids pick the CJ’s and my wife is on FB so she posts there when they’re ready.

Interestingly, a gal from Omaha had ordered 2 gallons of the CJ’s and we just happened to be going to the city today so we met her in a Menard’s parking lot to save her a trip up here. (We had one other CJ delivery to make as well…)

She tasted the CJ’s and said they are what she was looking for (said they were used to sour cherries in her country of origin, and had been unable to source them in our country. Well of course you won’t find them in stores so…)

Well, I’d picked a baggie full of Juliet for her to try just in case she would want some of those. She tasted them and had her mother taste them and said she would take two more gallons of Juliet.

We got home from Omaha and my wife checked her FB Messenger and the gal had attempted to call us before we left but my wife hadn’t seen the call come in.

The day before I had a couple from 60 miles away come over they too thought the Juliet were “sweeter” out of hand than the CJ’s.

My Juliet are not approaching the size they were last year by-the-way.

They were not to sour for me. They tasted better this year than last year. They had more of a cherry flavor. We haven’t had much rain either. I actually like the richness of CJ compared to Juliet. My Juliet’s were not much bigger than CJ if not the same size. The wildlife got all mine even with the nets on they got threw but I still got to eat about ten or so. My crops were not that big anyway. Maybe a 1,000 of the CJ and 200 of the Juliet. I didn’t think they were going to size up. They’re so small then in about a days time they turned red and swelled to twice the size which was still small but worth picking. I will have to build some serious boxes covered in hardware cloth to protect them. Maybe next year I’ll build two and see if it’s worth it. Mine might just be ornamental bushes with perks for the wildlife. Right after I put my net on Juliet I saw a house wren fly full speed right threw the one inch hole in the net! I’m’ not sure if they ate any. It was the chipmunks chewing threw.
It sounds like your selling them by the gallon. How much do you ask for a gallon of them?

My Juliet are not approaching the size they were last year by-the-way.

I had a lot of fruit buds damaged this year, but not all so my CJ had about 1/3 the cherries we normally have. They were huge!! Almost as big as Juliet. So thinning will increase size.

Mine might just be ornamental bushes with perks for the wildlife

Well we have some bird pressure but honestly I can’t really tell it. I mean I see a few damaged cherries but nothing major. My issue is deer… I have a 5’ fence around my orchard area and as a general rule the deer stay out. (unless I leave a gate open…) However this year I have a stubborn Doe that’s acquired a taste for Juliet.

Two nights in a row I went out after 11 P.M. with a flashlight looking for my cat and there she is, inside the fence and eating the Juliet bushes.

So I extended my T-posts with strips of 2x2’s and strung two strands of orange flagging tape to give it the appearance of about a 9’ fence.

Didn’t slow her down at all. I’m inclined to roll with it as I’m sick of picking anyway!

It sounds like your selling them by the gallon. How much do you ask for a gallon of them?

Yeah a couple years ago my wife called around to the local orchards and found they were getting around $35 a gallon!!! She puts ours on her Facebook at $20 a gallon and we sell all we can pick.

…They were huge!! Almost as big as Juliet. So thinning will increase size.

I agree 100%. And I honestly think that’s why the CJ’s here are consistently smallish, because the bushes are over-loaded every single year.

And I honestly think that’s why the CJ’s here are consistently smallish,

Yes, I concluded the same thing.

Well I just finished pitting and freezing a gallon of Juliet: 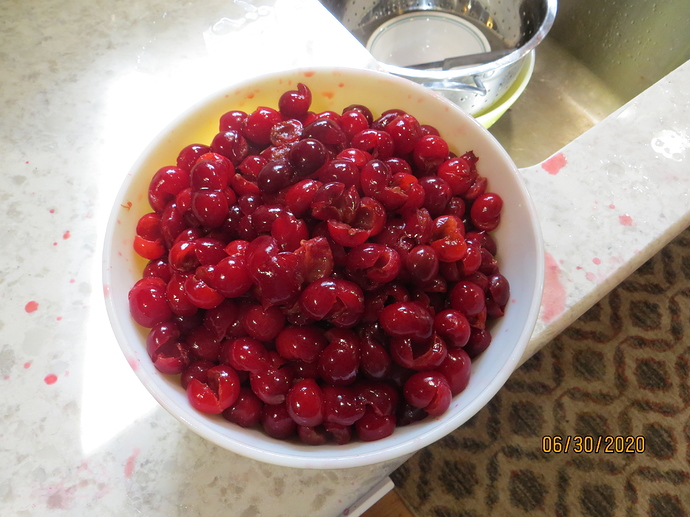 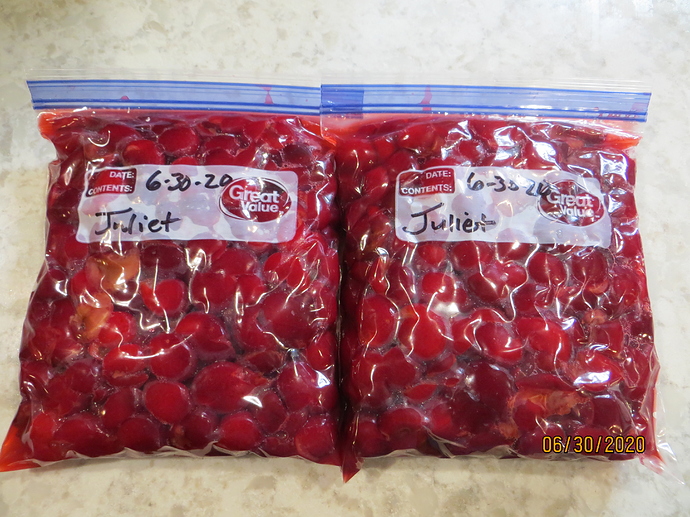 So I decided I’d go collect a few samples to check brix on:

As you can tell, the Juliet’s in this picture aren’t a lot different in size from the CJ’s, although I will say that the early ones I took from the top of the bushes were bigger than these here.

He’s the highest brix CJ at 11 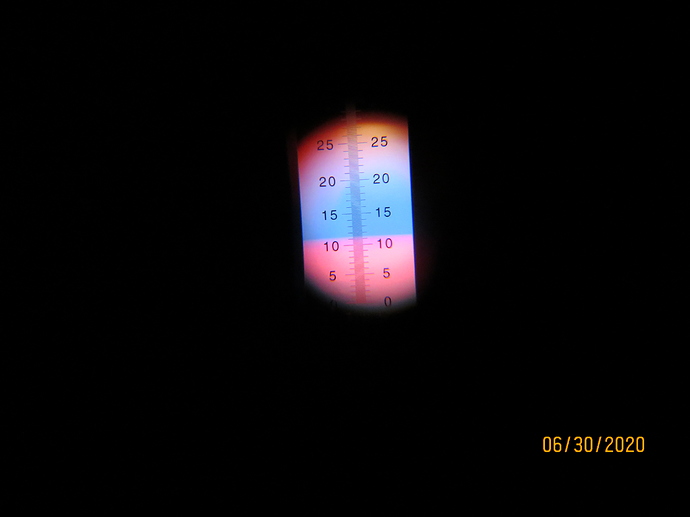 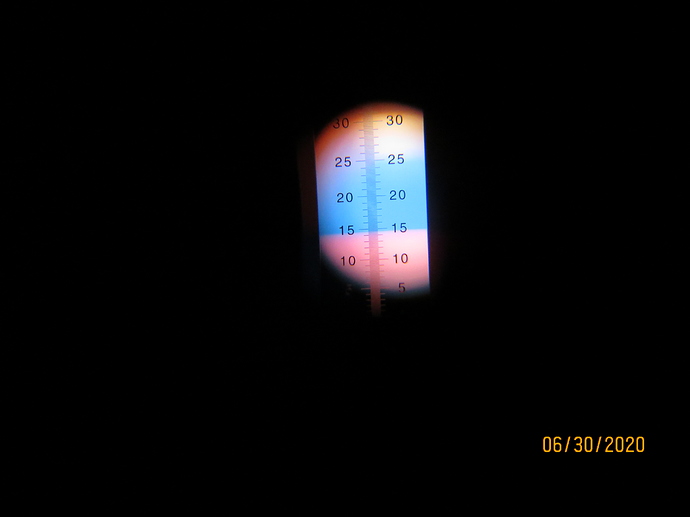 And here’s the lone ER. I was just walking past the tree and saw it had a fresh bird peck so I snagged it just for kicks. It’s reading a tad over 16 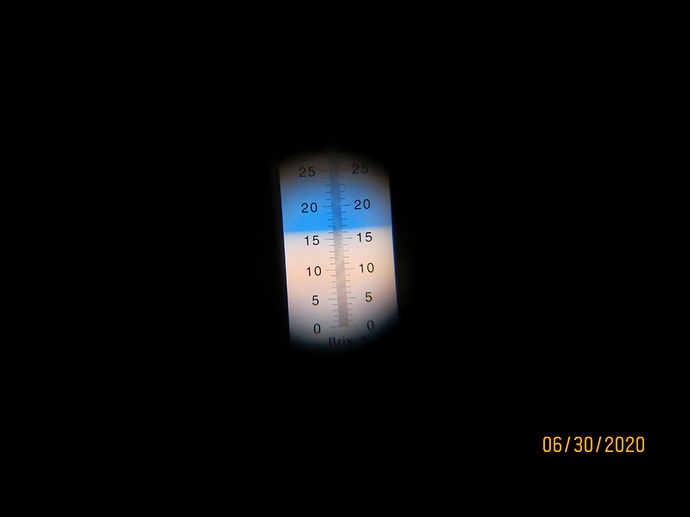 Has anyone compared Juliet pie to Montmorency pie yet? I already have Montmorency and Carmine Jewel, so getting Juliet would depend entirely on the flavor profile in cooking. I don’t care too much about sugar, I can adjust for that.

I just started harvesting my ripe juliets yesterday they were a few days behind montmorency but very close in harvest time sadly. Very delicious, not very astringent but still pretty tart, I do not have a brix meter but i imagine its in the 20s? Seemed similar to the ripe montmorency in sugar, maybe more acid and a little less of that morello taste? This year maybe montmorency was better (Its only her second year in ground and was a year old tree when i got her) but i was very happy with juliets flavour and lack of astringency. 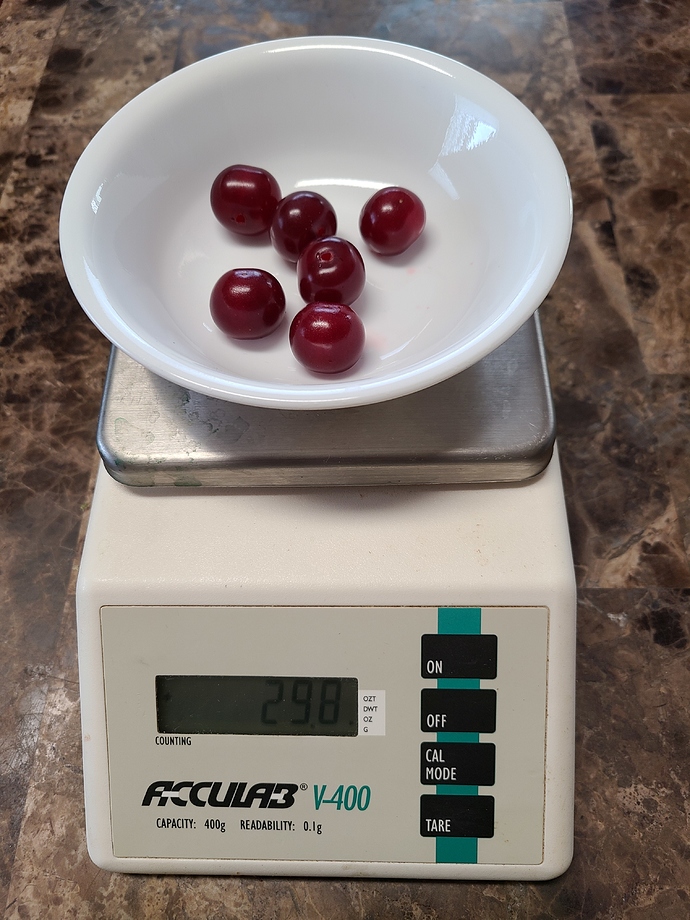 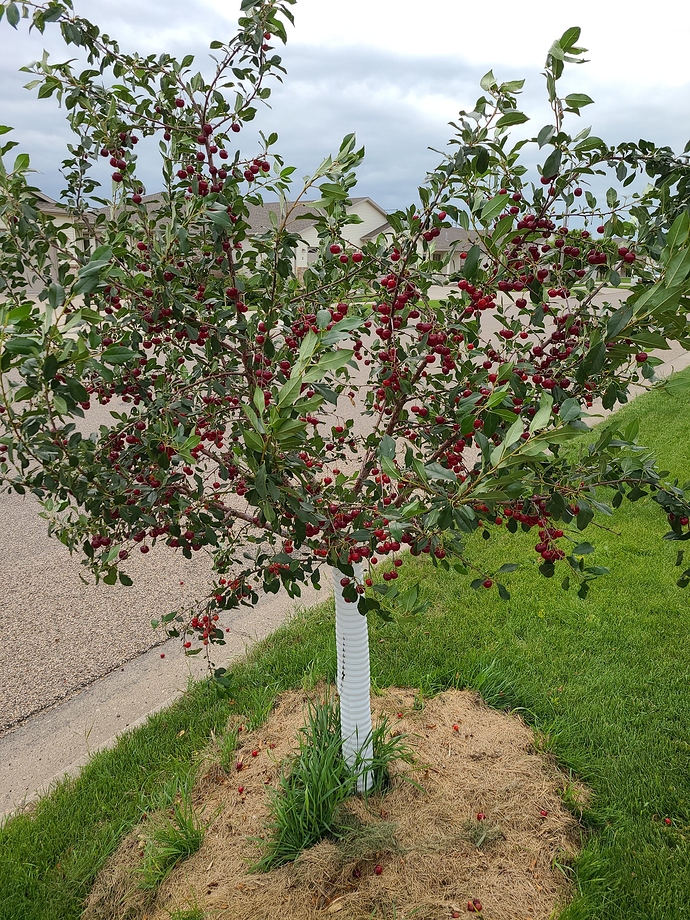 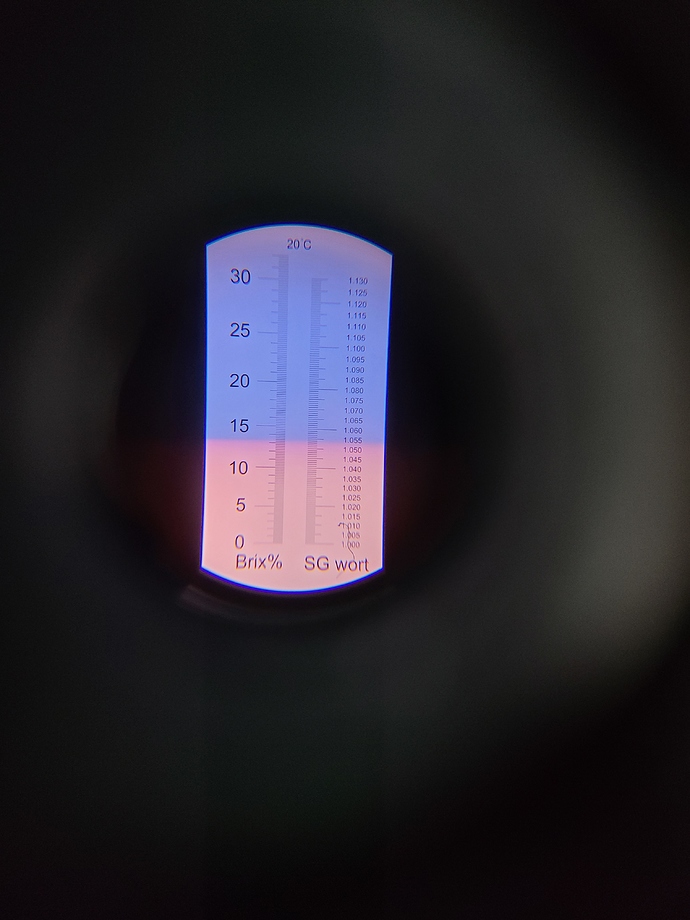 hmm… mine are only about the size of a big pea. maybe our drought has something to do with it. just starting to color up.

Mine were like that too and then when they turned red they doubled in size.
@TheDerek I’m jealous.

Could the fruit drop some type of nutrient deficiency? Adequate phosphorus is essential to fruit development.

You are right, but in the case of Juliet it seems to just be a characteristic of this fruit to drop most or all of its fruit the first few years. I say that only because I’ve seen many people here on this website who grow it in all different climates and soils and almost all report fruit drop early in the trees life. I do think mine seemed to take more years than most to start holding its fruit to ripeness, but this year it was loaded right up to harvest. Seeing that tree completely covered- and I mean LOADED- with those beautiful red cherries really was a joy.