New to me land

Maybe plant some honeyberries before they get banned

I am not familiar with honeyberries, but I am curious why they would be banned. They don’t appear to an invasive plant species.

the state of Maine has always been against anything that might become invasive here. even though we have native honeysuckle, our state plant specialists have put honeyberry among many others on a watch list for potential invasiveness. 100yrs ago they put all Ribes on a destroy list because its a host for white pine blister rust that can kill white pines. in the mid 1900’s the state sent thousands of workers into the woods to rip out any Ribes that could be found. it had little affect but the ban on these plants still stands today. you walk anywhere in our woods and its not hard to find wild Ribes yet the ban continues. even N.Y rescinded its bans on them yet Maine stands firm. its sad because Ribes grows so well here it could become a commercially viable crop. there are many cold hardy northern fruits that are also on that watch list.

That is so unexpected. I even searched for “honeyberry invasive” and saw nothing that indicated it was. In fact, the first link in my search said this: “Invasive potential – none” 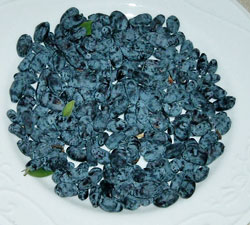 I’ll say this: pictures of white pine blister rust gave me an appreciation for why they were attempting to eradicate vectors of the disease.

the thing is there are still wild Ribes everywhere and yet there are still plenty of white pines. the ban is archaic and should be removed. it does no good. if they are worried about it, there are many w.p.b.r resistant Ribes. limit growing of them to those, instead of holding onto a ban that has no effect in stopping infection. many scientists say the white pines have achieved immunity to the fungus so why keep the ban.

A beautiful gift would be to find out the late daughters favorite fruit/vegetble and make a point of growing that as an item to make available at the thrift shop, and maybe the care home in her name. Wishing you great weather, minimal pests and bountiful harvests

a great idea! ill have to pick the parents brain.

I am not familiar with honeyberries, but I am curious why they would be banned. They don’t appear to an invasive plant species.

If a plant is banned, then theoretically existing plants would be grandfathered in.

I believe the concern around honeyberries taking over the countryside is mostly academic.

government overreach at its best!

Between White Pine Blister Rust, White Pine Weevil, and now Red Rot we (New York) don’t have much good white pine any longer. The younger trees have multi-trunks from the weevil and now the beautiful older trees are full of red rot. Young trees die from Blister Rust. I’m too the point that I pull white pine seedlings out of the ground when I see them, it’s not likely to develop into a healthy tree for lumber.

thing is at least in northern Maine we dont have many white pine because of our heavy soil. why we are allowed to grow red/ white currants and gooseberries where as southern Maine has a total ban. but certain ones of those can also get w.p.b.r. see why i say the ban is so stupid? its all about control. not the science.