Pomegranate Success! in Mid-Atlantic. I live in Chesapeake VA, which is very near the coast. We have HOT humid summers, but I have had success with my pomegranates

I sent you a message, with my shipping address. I meant to add - I’ll be glad to reimburse you for shipping! (Ran out of space in the message!) You are so sweet to offer! Thanks again!

I live near Winston-Salem and virtually have no sand. My poms are planted in almost straight red clay but the drainage is good. For some reason I have only gotten several fruits from kazake, they are very good and the darkest red seeded of all the others I have growing.

Im growing Grenada here in Bixby Ok. Technically we are 7A. its right up against my metal building on the south side and its get the first morning sun. Im hoping that with a thick layer of mulch and wrapped with a few frost cloths and maybe a tarp on the coldest nights that I can get it though the winter. I love pomegranates

I live near Winston-Salem and virtually have no sand. My poms are planted in almost straight red clay but the drainage is good. For some reason I have only gotten several fruits from kazake, they are very good and the darkest red seeded of all the others I have growing.

Pomegranates do produce in clay soil in time, yet the fruit size and the quality is less. The few pomegranates is likely because of the clay soil. Yet a climate with cool winters increases fruit quality making up for some of the quality loss caused by your soil.

@Richard - Which are the tastiest, ‘according to Richard’, in Southern Cal? Just curious.

Which are the tastiest, ‘according to Richard’, in Southern Cal?

In hot interior areas of SoCal such as Burbank, San Bernardino, Ramona – Parfianka is hard to beat. If you have a Pomegranate juicer then I could also recommend a few hard seeded varieties with exotic flavor.

For the coastal areas such as Encinitas, Westminster, Redondo Beach, Somis – cultivars like Parfianka and Wonderful will rarely ripen properly. Instead I recommend Eversweet and Myagkosemyannyi Rosovyi. The former was developed by John Chater of Camarillo and is available commercially. The latter is available from members of the CRFG:

This Myagkosemyannyi Rosovyi Pomegranate bush is all leafed out now. I’m hoping for a bumper crop this year! [image]

With the encouragement of @alanmercieca and @GeorgiaGent, I Snipped Some Suckers from my Grenada pomegranate to share with them, and to try to propagate some for myself. Hope they ‘sprout’. I followed (probably too many) directions from the internet - so maybe I will be successful this time! They look so cozy in my sunroom. 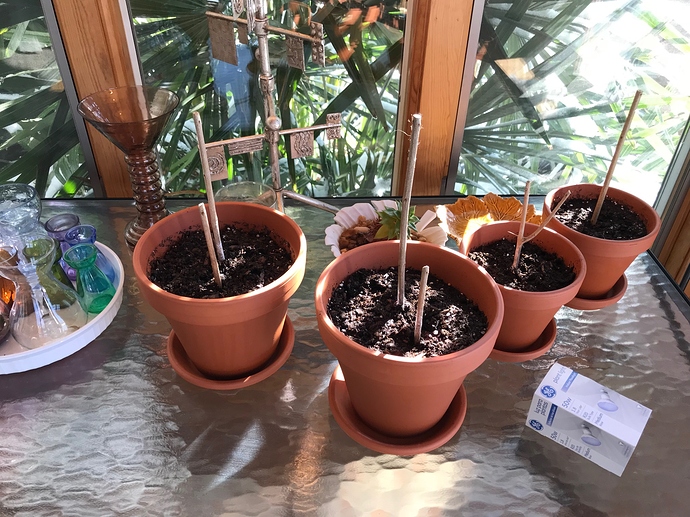 Just chiming in that I’m in the NC zone 7b club (half an hour from Asheville). This is my first winter with the Poms in-ground - 9 varieties so far in ground (the infamous Salavatiski, Nitiski Ranni, Afghanski, Al Siri nar, Bala miursal, Azadi, Sakardze, Parfianka and Kazake.) I’ll post some updates on whether they survive above-ground with this brutal winter (got down to 0F), but I protected them with tires stacked around them, so I’m hopeful.

Tires! Now that’s a great idea!
I’ll be interested to know how yours do, 7B. I have a couple of the same varieties, but they are not planted yet. I couldn’t find a Nikitsky Ranni. Everyone seemed to be sold out. I’m still looking. Where did you buy yours? Mine came from 2 different sources. Rolling River and Exotic Fruits. I am trying to order a couple more from GreenSeaFarms, but I cannot decide which ones to ‘place my chips on’! (It IS a crap shoot! 'Never know if they will like the soil. Or the climate. Or me.) !

Oh boy. It’s easy to forget them, when they are tucked away, off my beaten path. I am giving it a go . . . but can always resort to ordering again.

On rooting cuttings, my success so far has been far better with poms than figs, but like Richard said, they can take a while.

I got all my in-ground poms (except the Salavatski’s) from Green Sea Farms. I actually stopped by the farm while on a trip to Florida at one point and got them.

The tires seem to be working very well so far - when I checked on even the least hardy one (Azadi), it was still green a week after the big freeze we got (again, down to 0.) Of course, maybe it just needs time to look dead, but so far it looks good. I’m hoping keeping the sun off them will delay them breaking dormancy too - with the hardier poms, it seems the key is to keep them dormant until after the last hard freeze. A fellow not far from me in SC (Zone 7b still) has no trouble growing Salavatskis, except for the weird year here-and-there where we get a late frost. The plant survived below ground, but that year’s crop is usually a bust. He said he gets a few dozen poms/year off his Salavatiski.

Yes that has been my experience too, one variety can be way more slow to root than another at average, then again two cuttings of the same variety one cutting can root way faster than the other.

I’ve ordered one this year, but I’m probably going to keep it in a pot. I suspect the Richmond winters will kill it each year.

I got all my in-ground poms (except the Salavatski’s) from Green Sea Farms. I actually stopped by the farm while on a trip to Florida at one point and got them.

JD - That sounds like fun. We go to Florida several times a year. That’s where we both are from, and still have family there. I will have to make a point of stopping sometime . . . at least to see the nursery and all those pomegranates in one place! (And of course . . . leave with one!)

Really? I’ve had a few stragglers, but a lot of mine are on a similar level as figs - though admittedly I do have them in a ~80F growth chamber.

KikiVA - Evidently in Central/NFL there are a bunch of backyard heirloom varieties - so keep your eyes out!

JD - I think they would wither in no time up here. Born’n’bred in sunny Florida.

@Richard
I didn’t think I was losing it . . . here is what you wrote a little over a week ago. I remembered, because I do not take your advice lightly! If the CRFG is not the place . . . I’ll keep looking.

For a few decades, Parfianka (and synonyms) were advertised as the best Pomegranates to grow in southern California, but most years they cracked and rotted on the whips before ripe. Many people (incl. members of CRFG) thought that was the revered taste of pomegranates. I knew otherwise, having grown up further inland.

You folks in Virginia, San Jose, etc. … You’re looking for “Eversweet” – a cultivar produced by John Chater, and also “Myagkosemyanni Rosovyi” – a cultivar selected for cooler (9b) climates by Wolfskill.
[/quote]