I’d say don’t worry about it. These monsters don’t slow down for anything. 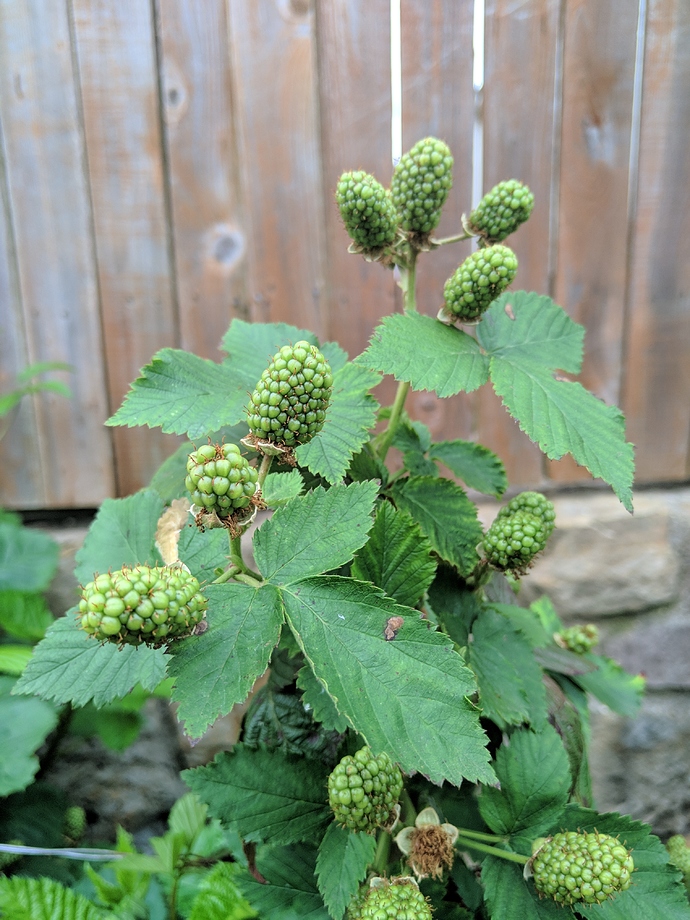 So glad I come across this tread! So far for what I read is that this variety is rust free besides been some of the other attributes!
Have any of you have had any issues with rust ? The reason why ask is because I have Triple Crown blackberries for three years and the last couple years I have noticed rust damage on them.

I might going have to get me a few canes to try them out, they are good looking and huge.

We had a warm winter here (also 7a) and mine never really went dormant. I might have crazy early berries this year.

Even here in NE Kentucky, mine is starting to push some fruit buds out, along with Traveler (both were planted two years ago). Never have seen floricane fruit off them yet, had a few primocane fruit late last year, but late freezes put the kibosh on that.

My other floricane blackberries haven’t shown any buds yet.

Freedom and Traveler are having a hard time getting established here in my perfect river bottom soil. They seem to be much more susceptible to cain borer that other verietys.

@39thparallel
As you know cane borers are susceptible to my heirloom blackberries. Im joking but only somewhat! Little is not susceptible to my grandfathers favorite blackberry. The berries were passed down through the family over 100 years now until they are more wild than tame. They were named health berries not because of how healthy they are for us but rather how healthy the plants are! I spent 15 years improving the variety until they adapted fully to this area Blackberries by the gallons . I just helped the plants improve themselves by selecting the hardiest plants and making rows from the hardiest plant over and over. Most of the original plants i planted died. You can go back to growing those Mike if you need or want to but i suspect they do to well in river bottom soil. In heavy clay they seem to do the best often where nothing else grows they can reach 20 feet in height. My second favorite blackberry to the heirloom i grow is primeark45 which are exceptional. Have lots of hope 45s will fully adapt. I think 45 are the ones with the best genetics ive seen. Freedom does ok here and again im observing their growth habits hoping to someday make a cross of berries. They will adapt here in time.

My PAF floricanes made it through the winter, but mild late frosts destroyed the growth. They seem to have new primocanes now.

My Triple Crown floricanes have great growth and look like they will have flower buds soon.

My Babycakes is covered with flower buds. Looks like it will be first. I don’t know what they will be like, yet.

I love the PAF berries. They are so big and tender and juicy. But I hoped for earlies on the primocanes, and I don’t think they will do that in my erratic (Maritime Pacific NW) spring climate.

Clark’s blackberrys have the best taste by far. Unfortunately, They also have thorns like fishhooks. I might try Triple Crown or plant more PA45

my buddy 60 miles south of me grows pa 45 in z4b and they do well. he gets a little winter damage during really cold years but they are so vigorous many canes make it and fruit. i planted fedcos Nelson blackberry last spring as tissue cultured plugs. they managed 4 -5 ft of growth last summer. I’m hoping to try the berries this summer. tried the pa freedoms here. they grew very good but everything above the snow line died and the primocane crop didn’t have time to ripen before frost killed them. i also have baby cakes dwarf blackberries that gave me 2 gal. of good tasting large blackberries. they’re good but i want something like you got that puts out a large crop so i can freeze some for the winter.

In my experience if i plant thousands of seeds the genetic differences are surprising! I say this but in my case its not me planting at all its the birds and they put them everywhere. I taste and recgonize a difference in every berry. They are adapting to this environment more everyday. If you grew them the first batch could not tolerate your weather its to cold for them. I know it was to cold here for them originally but a few lived. There were some of those that then didnt put out enough roots and died from drought but yet a couple survived but were dead to the ground. Then the next year they began to adapt to the wind and shot up canes the diameter of your thumb in some cases. They began to get extra height to compete with trees and extra roots. These heirlooms are full of genetic diversity which is adaptation wrapped up in every seed and its not necessarily good. Some berries are bitter in one spot where they grow because of the high aspirin like compound in the fruit. Most fruit are delicious! They are literally adapting before my eyes. The soil can be solid clay and hard as a rock but when i come back there in 10 - 15 years they have tilled the soil and because they send runners through the ground the soil is fine rich black soil. They get extra nutrients from the clay and wherever the berries grow benefits fruit trees in the same spot.

Drew advised me of the same when i planted PA Freedom but i was too impatient. maybe i should have let them hang in there. maybe they eventually would have adapted. they grew well but died above the snow line.

I’m new to growing berries.
My wife said last fall that she loves blackberries, so i just jumped on Isons website and ordered 4 different upright varieties.
I did not want to mess with a trellis.
Well, here is my PAF, just floppin’ all over.
What gives?!? 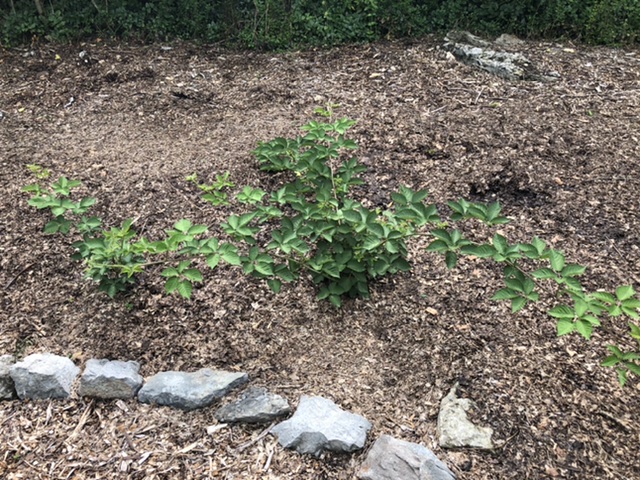 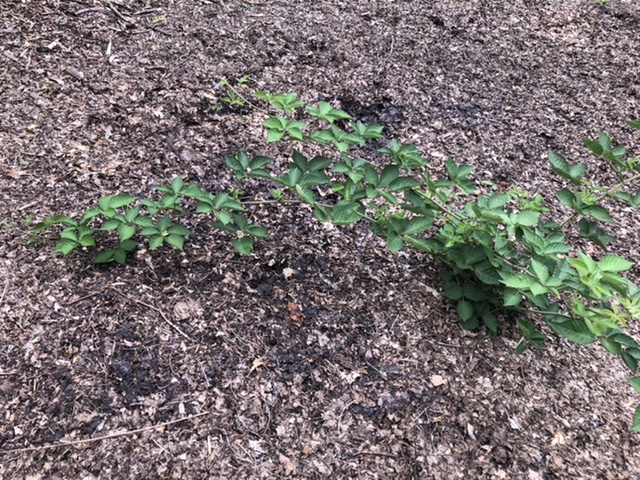 Also, what in tarnation is this? 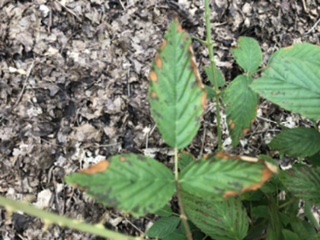 Your blackberries will be more upright next year. Young plants have thin, weak canes which bend over. IME varieties like Osage and Traveler are more upright than PAF.

Well, here is my PAF, just floppin’ all over.

You haven’t seen anything yet.

. Next spring PAF is going to send out large, fast growing upright canes that will get really tall really fast. These will stand straight until they get berries on them and then they will fall over and break loosing berries for you. Next year when they start growing start right away breaking them off to a controlled height. They will put out new growth that will also go straight up so shorten them too. It’s almost impossible to keep their height controlled. You will have to support these canes with something if you don’t want them to break. The good part is they give you two crops per year (at least in my zone) of huge delicious berries. I try to keep everything under 6 foot and you have to start tipping them at half that height and stay with it until the primocanes start blooming.

Phew - Thanks Y’all!
Any quick tips on a trellis/support design? I reckon I can research as I’m sure this has been asked a thousand times.

Also any diagnosis on those sketchy leaves above?

Any quick tips on a trellis/support design

There have been some people on this thread or maybe another blackberry thread that shared what they do. Mine is not really adequate nor is it aesthetically pleasing. Lol. I’m not the one to give advice.

I’m not sure on the leaves. It could be that they just got dry. It doesn’t look lethal or even much bothersome. Mine get a bit of rust sometimes and I’ve used Serenade and Immunox on them but that is usually spread over the whole leaf and not on the edges.

That could be a sign of fertilizer burn. Yes the trailing of the first years growth is normal when starting with smaller plants. If you got a one year bare root, those send up healthy canes from the base and new suckers. but many send out small live plants that are grown by root sections or from cuttings. The important thing is to get a healthy set or roots growing, that way you’ll have a good start to new canes and overwintering.

I am on the north coast of calif-even though I am in zone 9, we have quite cold winters and very cool summers. I have read that prime ark freedom needs a lot of winter chill, so it’s not recommended for zone 9. but I’m wondering if folks have had it in zone 9 or in the pacific northwest and if so, how it’s done there.
btw, I already have prime ark 45, and it is doing great here, though I wouldn’t say it has super flavor–just okay, but nice big fruits. You just need to wait until they’re not just very black, but also soft to the touch before harvesting them.They’ll come off easily before fully ripe.

I took this photo yesterday. I would give them a try if you are maritime PNW zone 9. It is described as a low-chill variety. 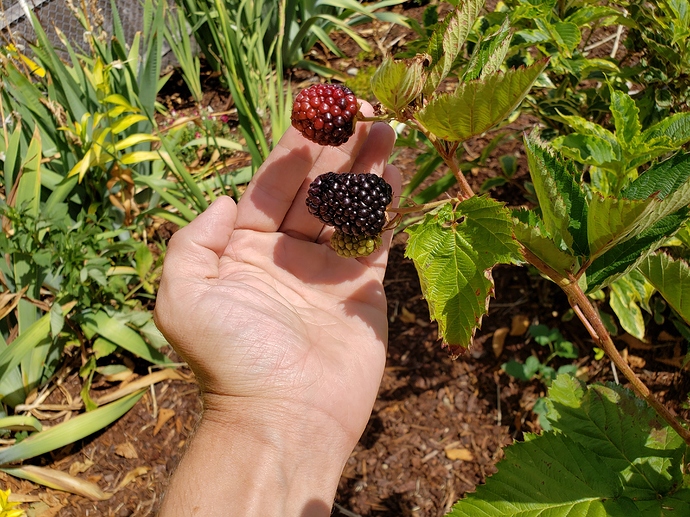 Size is great. They will still be sour.