Jesse
That is encouraging about the B9 rootstock. Did you do any thing special with them or did you just put them in the ground?

I have some sort of rootstock growing from the only apple tree that I ever bought (and it died from the graft up) that I recently tried stoolbedding and they ended up looking like your G202’s with just a couple tiny roots. The original tree(that died ) was planted decades ago so I am sure the rootstock that is left is one of the M type rootstocks .

Do plant patents stop you from propagating for your own use or just commercial use?

Any asexual propagation of a patented plant is prohibited (unless licensed to you by the patent holder).

I is pretty much based on voluntary compliance with home growers, and I suspect the patent holders are mostly concerned about commercial growers- but they still want their commission from every single scion. It’s too bad their isn’t a system where home growers can send them a buck or two for every successful graft. Be good for everybody.

So does anyone know which apple rootstocks are still under patent? Obviously not the m series. I’m guessing the Geneva series is. What about the b and p series? Others? Is it legal to propogate b9 or p2 without paying royalties?

Does anyone have a favorite non patented rootstock to propogate? I know some are harder to root than others.

I ran across this the other day in the Reference section here. Maybe it will help:

Hey. What do you know. I think g11s patent has expired.

Treco.nu includes in their rootstock descriptions a brief bit about the ease of propagating the variety.

I like Akiva’s method from Twisted Tree Farm. He laid a whole rootstock tree down horizontally and stooled the whole length, turning what would have been branches into rootstocks. I may have to copy him with some mm111: 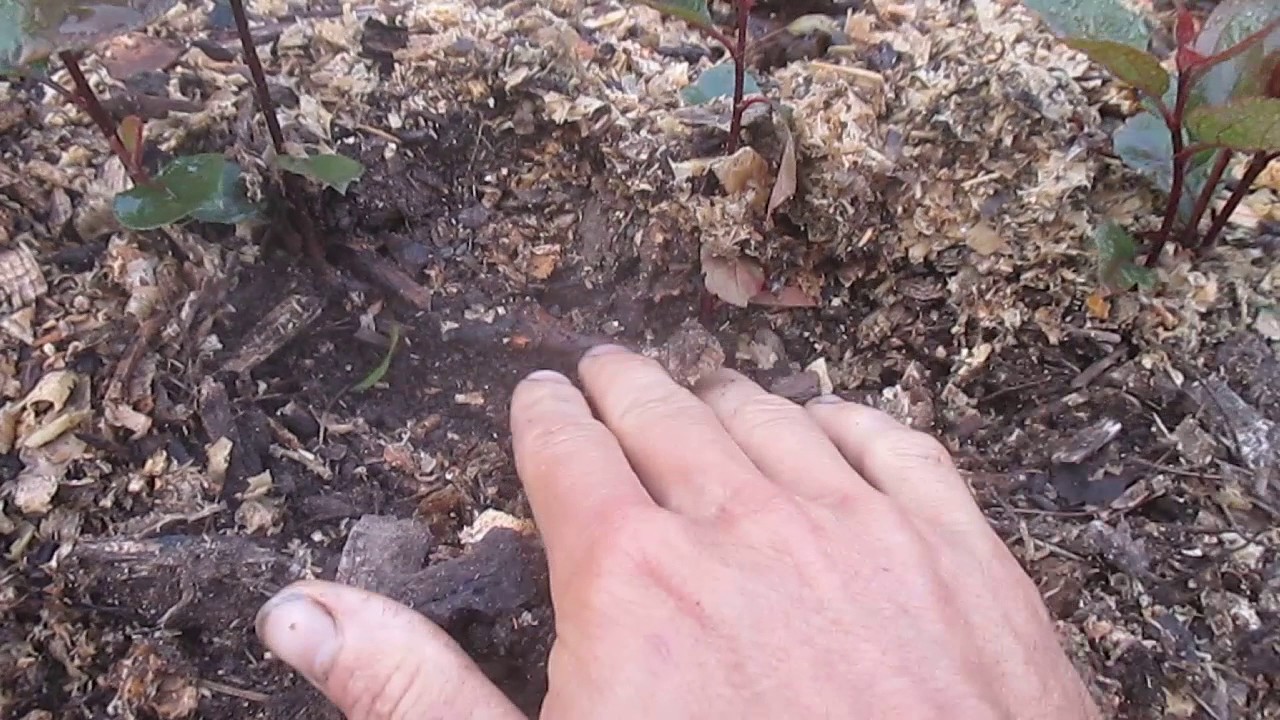 I used to look at root suckers as a burden. Something that should be cut off, … Just more work.
Now I see them as a resource ,that maybe more valuable than the fruit crop.
I layer them in these pots, that’s another rows worth, right there ! 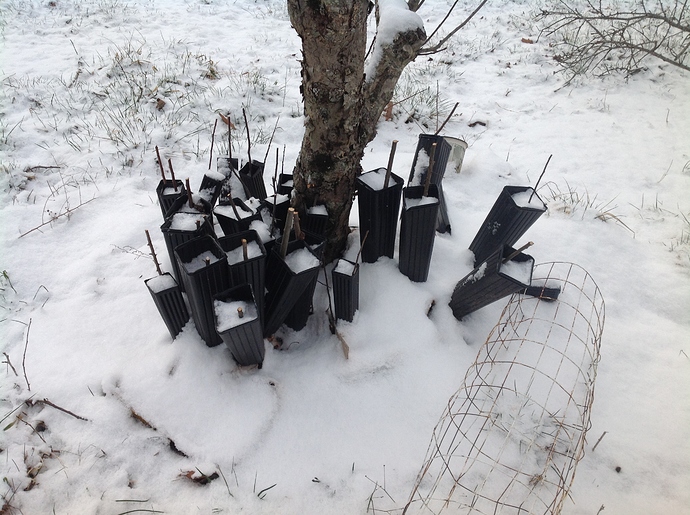 @Hillbillyhort, what r u using in the pot? soiless mix, sawdust or somthing different?

On occasion some of my B-9 trees sprout a sucker or two, if I did what you are doing with no more than 1 sucker on any given tree what would be the downside to that (for the tree)? They are all producing tall spindle trees.

I found I can just snip off dormant M111 suckers, cut them into 10-12 inch lengths and stuck them in a pot (about 6-8 inches below the soil and 2 buds above the soil). About 50% seem to root and take just fine. It works best with suckers that aren’t too thin, so the basic pencil-thick works fine. I wrap parafilm over the part that will be out of the ground, but that is the extent of my care. You could do the same thing just sticking a bunch in the ground anywhere you think you might like a tree in a few years and select the best one when they take. I think M111 is about the easiest to root, so I can’t say how viable the lazy approach would be for other stocks.

Mostly I just toss them out, but I think this year I’ll try bench grafting some of these “sticks” and see if they root and the graft survives. Using some bottom heat might be a good idea for this, since I want it to root early enough to support the graft.

Not much downside for the tree, mostly comments from the spouse to move that old flower pot.
However, the more you let suckers grow, the more they want to.
So if you don’t want suckers, it maybe best to not let them grow
Usually , it’s best (?) to grow one, or the other,
Here , for now , iam growing a little of each.

I like Bud118 and Geneva 30. Since Gen30 does not stool as prolifically as most, laying a young sapling down and rooting branches looks like a method worth trying.

@zendog how did this go for you? I was considering grafting M111 at the same time as trying to root the cutoffs. I was thinking using the DIY hot callus pipe would at least seal the graft on well beforehand.

It has worked fairly well with the M111 for the few that I’ve done. I think I had at least 75% make it just fine, but I think they are about the easiest to root so I wouldn’t plan on that level of success with other rootstocks. I may try some this year where I bench graft the M111 “sticks” with a scion and stick them in the ground. I may add some rooting hormone to increase my chances of survival.

I’ve used a DIY callus pipe for persimmon bench grafts, but to be honest I don’t think I’d bother with apples and pears since they generally take very easily if you get the cuts right.

Planting horizontally is a great idea. I have a tall, spindly M26 that would probably be perfect for this. Problem is, I don’t need more apple rootstocks

and there are some pretty impressive volunteer blackberry roots surrounding it right in the corner of my fenced vegetable garden. All that is going to come out this spring and I’ll refresh the fencing.

I have one suggestion to add.

When starting a stool bed to propagate rootstock I would encourage everyone to start with rootstock that has not been previously grafted on to whenever possible. Many of the old fruit tree cultivars have accumulated viruses over time. This is not usually a major problem, but if you add those viruses to what had previously been a clean clonal rootstock you will potentially increase the total number of viruses your future trees carry if each scion gets to have new viruses from the rootstock added onto the viruses it already carries.