Auburn, neem and surround has been my approach as well, and my fruit did quite well with the exception of nectarines. I am considering bagging or at least a comparison. I read a study last night where someone did a comparison of sorts–plastic vs footies vs no bagging. He didnt speak much to what he did with the unbagged fruit. I think a fairer comparison would have been holistic sprays on schedule on some fruit, as well as unsprayed trees as the control (the pharmacist in me coming out). Maybe he chose not to do that because he wanted a comparison side by side on the same tree, which is unrealistic with spraying a portion of a tree. 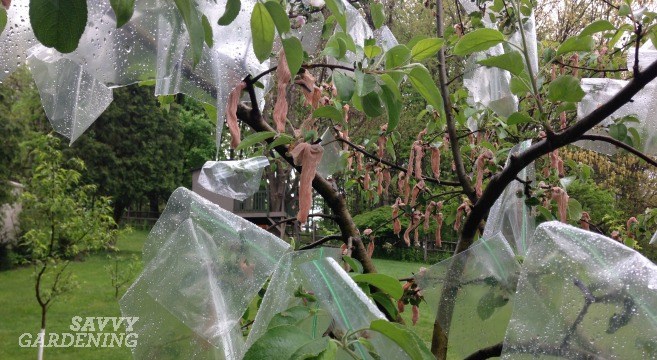 The fruit bagging technique is an excellent way of growing organic apples. Follow along as I experiment with this method and learn its pros and cons.

He summarized–I lost nearly all of the “unbagged” apples to apple maggots and codling moths, but I managed to harvest a few dozen apples that were covered. Aside from the earwig and squirrel issues, the plastic baggies did far better than the nylon footies did at protecting the apples. BUT, the nylon footies worked way better on a few peaches I used them on. I harvested a handful of absolutely perfect peaches because they were covered with nylon footies. On the apple tree, however, the plum curculios had no problem chewing right through the nylons.

The plum curculios had no problem chewing right through the nylons.

D~~n curculios! Where I am, they get going even before the fruit has sufficient size to be bagged. I pick a warm night after petal fall and nuke them with Pyganic.

D~~n curculios! Where I am, they get going even before the fruit has sufficient size to be bagged. I pick a warm night after petal fall and nuke them with Pyganic.

I expect that some of these reports of failed baggings were more due to not getting the bags on early enough… the curc moves very fast once the fruits start to grow. It took me almost five years to get the hang of spraying my Surround early enough.

I am surprised to hear that Pyganic does anything for curcs, I didn’t think it was potent enough. Maybe timing is key.

I can eliminate 100% of curculios with bagging even in Z7 MD where they are horrible. I bag at nickle size and looking for scars when I bag (by nickel size probably 50-75% of fruits are already damaged. I bag and thin in one pass and I’m done spraying for the summer. Unbagged apples get 100% damaged. They never miss a single apple. I only have a couple trees though. I can’t imagine doing more than few trees. It takes such a long time.
My peaches, however, which I painstakingly bagged using the fancy Cornell bags, were 100% destroyed by squirrels. They left hundreds of unbagged peaches on the trees, but didn’t miss a single bagged fruit. They were clearly targeting bagged fruit for reasons I will never fathom.

By nickel size PC has gotten almost all my apples. If I bag at dime size most of the bags fly off, with apple in them, in the wind. Forced to spray Surround, looks like, at least once.

Same as @hambone. Can’t wait for a nickle size. Need to spray Surround to cover from petal fall to bagging size. Even that, not 100% success.

Timing is everything. Usually, the pests get to our fruit before we do.

I am surprised to hear that Pyganic does anything for curcs, I didn’t think it was potent enough.

PLUM CURCULIO: A report from Sauk County indicates
PC activity has increased sharply in the past week and
the first feeding and oviposition scars are appearing on
apples. Close inspection of fruits for feeding and egg
laying injury should be underway in apple orchards be-
yond petal fall and continue until 308 degree days (base
50°F) accumulate after McIntosh petal fall. Female weev-
ils show a strong preference for early-sizing apples and
fruitlets 10 mm in size will be most attractive. Organic
control options include PyGanic (pyrethrin) applied at
dusk to the outer rows and Surround WP (kaolin) on
interior trees.

But aren’t you doing something like 90% thinning anyway? So all you need is 1 apple out of every 10 to not have been hit and that’s enough to successfully bag. By nickel size I my most exposed clusters are a total loss but most clusters have at least 1 if not 2 that escaped.

Yup, but I thin them out at an earlier stage. I don’t want the trees to waste energy and it usually help with fewer June drops.

By the time they are nickel size, only 1-2 apples left per cluster. Easy targets for PC, coddling moths, maggot flies, etc.

Bagging a dime size is tricky.

It might be a worthwhile trade-off to wait. I don’t know your climate, but my apples get so big they threaten to bust out of the bags even with my having waited until nickel size to thin and bag. It does not take very long between those two sizes!