I understand that some sellers say, or elude, to legally importing cuttings. All places where you would want to import from are banned, europe, the middle east… and the countries that are allowed like canada, china, mexico etc. require a quarantine and phytosanitary certificates.

I don’t know why they really need a ban, it has created an opportunity for dishonest resellers to cash in.

Your post is confusing to me. Apply the theory of Occam’s razor to what’s happening with these unwanted seeds showing up.

Point #2: Your defense of the existence of stereotyping makes a logically unprovable statement.

Point #3: A theory does not a proof make.

Point #4: Prefacing an opinion with “in reality” does not conveet that opnion into a fact.

99.9999% of what is posted here is just an opinion using made up statistics and unproven facts. Anyone want to take aim at this statement?

Simple reality, if someone mails seed from China to the U.S. there is money in it somewhere. As posted previously, it is probably a “brushing” scam where positive feedback is placed for other goods.

99.9999% of what is posted here is just an opinion using made up statistics and unproven facts. Anyone want to take aim at this statement?

Regardless of whether or not there is a scam going on such as “brushing”, or not, its still unnerving to think that ther are easy ways to import invasive seeds to our countries. These seeds might not be vigorous in growth habits, or uncontrolled by a natural predator, but at the same time, they could be. These are good and bad invasives that have been brought here, ie Norway Spruce, and also many bad, ie Zebra Muscles, Emerald Ash Borer, Gypsy Moth. The list could go on and on.

Long story short, i think everyone that gets some of these should contact there state department of ag or the USDA. Not that the government always does right, but atleast they are the ones that make the rules.

Come on guys, a pack of seeds is not like an IED. How bad can a plant possibly be?

Seems like I’m in the minority here, but I might be inclined to plant some (perhaps wearing gloves) in a pot and see what happens. Seriously, what is the worst case scenario? I doubt anything particularly GOOD will happen, but I also don’t think anything especially BAD would happen, it would just be to satisfy curiosity. I mean, is some killer plant going to erupt and go to seed aggressively before I even notice? Seems like if you keep an eye on it the potential for disaster is pretty limited.

Also, just because it may be illegal to import seeds via the mail without other paperwork doesn’t mean someone can’t just send packages and that most of them will get through. Apparently much of the fentanyl in the US arrives in mail packages from drug manufacturers in China. I’ve bought little things from China on a few occasions (machine parts for work, ribbons and trims for home) that have arrived via post and they have never shown any evidence of having been opened up.

Although honestly if I got one of these packages I doubt I would really plant it, just because I can barely keep up with planting the stuff I picked out and ordered on purpose. Sometimes I get bonus seeds free from the seed company with my orders and I mostly don’t plant them because I have a small garden and limited time.

I just don’t trust any mystery stuff. And it’s not even as much where.its from to me. It’s just my trust level is at an all.time low for anything out of the ordinary. Especially something directly sent to my home.for.no reason that came from me.

Fair enough; it is certainly odd and perhaps even a little menacing. So I can understand the feeling of just not wanting to engage at all with that.

Ask the people in the southeast what they would give to be rid of Kudzu? Some plants can be monsters. My whole yard is covered in spur weed but I didn’t have any when I moved in here. The first spur weed plants came up where I park my car…I’m sure a seed came in on my tire or shoes. I tried diligently to get rid of it then but now it even comes up in my potted plants. I have jujube trees that have no serious diseases or pests. The jujubes in China are threatened by witches broom which so far has been kept out of our country. With genetic engineering this day and time you really don’t know what Pandora’s box you might open.

How bad can a plant possibly be?

It really could be pretty bad… 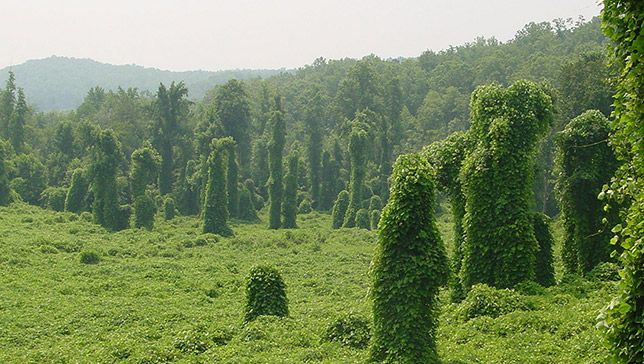 The Story Behind Kudzu, the Vine That's Still Eating the South

These leafy figures may be fascinating, but their comical appearance belies a sobering ecological reality.

I read the story of I believe it’s Chinese Chestnut trees that brought a plague on literally millions of American chestnuts in all the Smokies and Appalachian. I’d have to pull up the story but those giant chestnuts forest have never recovered. Some wrong plants and trees can be absolutely devastating.

I’ve read it too… it’s been a long fight getting Chestnuts growing again in the US and if I remember the story correctly they found one tree (?) that survived and have had to regrow resistant strains from that.

I have 6 Dunstan growing right now. A guy at Chestnut Hill in Alachua Florida has used them to help repopulate the east Coast. Mine are doing very well and getting to about 10 foot tall right now. I think they’re maybe 4-5 years old. It’s my understanding these aren’t the ones that were destroyed but they are helping. I guess the old Chestnut forests were incredible. But now I drift from the topic. Sorry.

dutch elm disease wiped out the most common tree here in the early 70’s. the whole st. john river valley was covered by huge ancient American elms along the rivers. now boxelder has replaced it but a few elms can still be found out in isolated fields. they just discovered emerald ash borer in a neighboring town a few miles away. another asian invader. its the 1st time discovered in maine. its wiped out most of the ash in the midwest already and we have lots of ash here. sad!

With genetic engineering this day and time you really don’t know what Pandora’s box you might open.

Genetic engineering has not been a source of any problems as of yet and is unlikely to cause problems in the future. This is not intended to either propound or defend gene engineering, just stating that it is not a problem. Invasive species on the other hand are a major problem.

The largest original American chestnut tree is located in Adair Co. Kentucky I believe. Two people joining hands would be unable to reach around it.

There is a American Chestnut Foundation/Federation (I forget which) for those interested.
I actually have a seed in my toolbox of a American chestnut I planned to plant but haven’t…collected by a friend in Sand Gap, KY.

How bad could it get?

They could declare an emergency…disallow you to post publically that it came from ‘China’…and make you put a mask on all plants within 100 miles so they might not catch anything (if there’s anything dangerous to catch)??