So when does M-111 production catch up with a dwarfing rootstock?

Could someone explain how bending works for increased fruit production? This sounds intriguing.

Try this link, Mickster. I asked that question last year and got great responses: 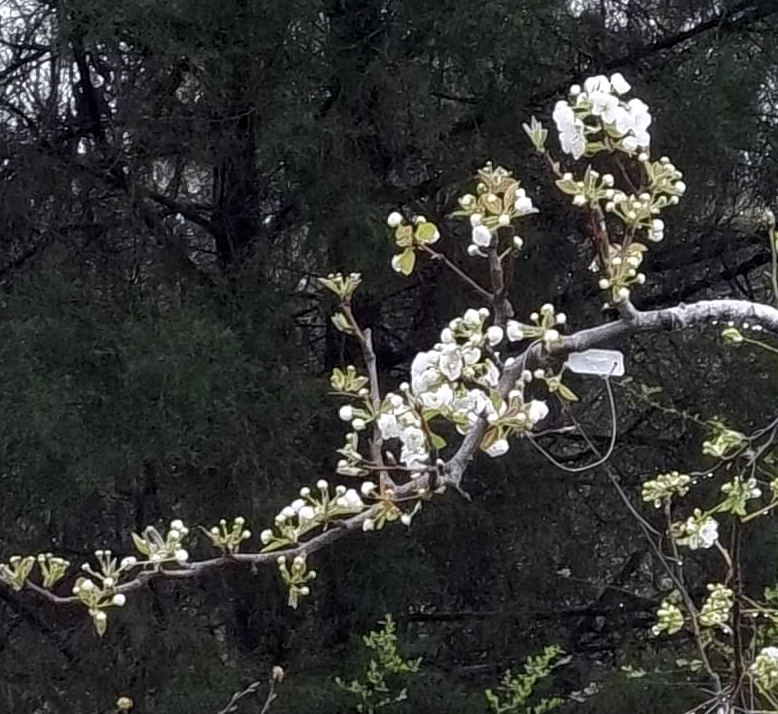 Bending branches down promotes fruiting, but why?

I don’t know why it works but I’m glad it does. Orient pear trees

Here’s a couple of extreme examples of what branch bending does. This is in East Africa where there is no dormancy period, and so the tree shape is controlled exclusively by the training. Both trees are on M111 rootstock. The top photo shows with no intervention; the tree is in runaway apical dominance and will continue to put out vertical, unproductive shoots. It will rarely, if ever, produce apples.

The bottom photo shows the tree after being topped and the bark notched above each bud to produce side limbs. It has entered into the fruiting mode and will be much easier to control in size. 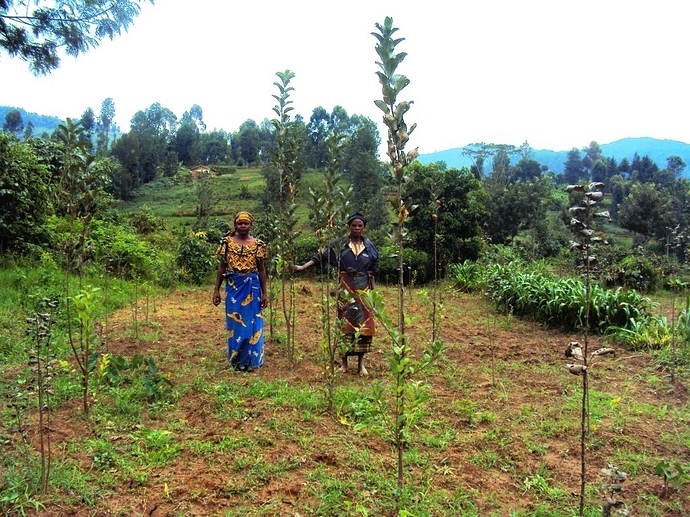 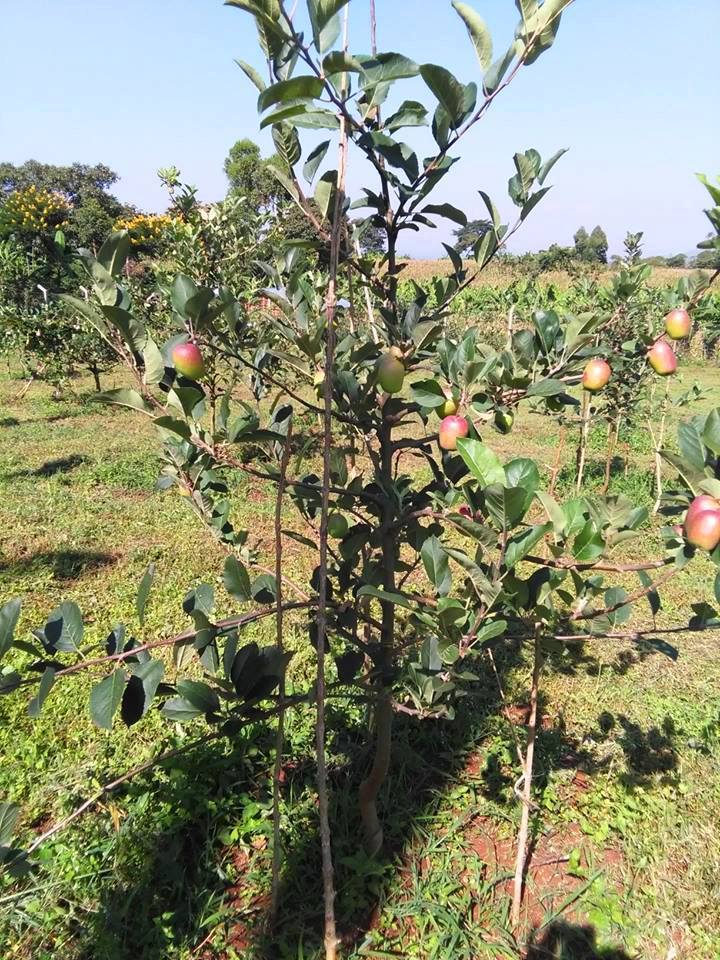 Someone probably has a good idea of when a MM111 hits maxium production, but I would guess around year 8.

As I said, it depends a great deal on the conditions I noted but it can easily take 10 years for trees on 111 to reach full productivity here in the northeast where we cannot control irrigation. I don’t doubt that careful management, such as bending the branches below horizontal can speed matters up- I’m talking about a more conventional 70 degree angle.

Your right applenut, the tree is in bad need of thinning. I’m going to hold off until winter because of fireblight concerns. I’m also going to get alot more aggressive at limb bending, it’s probably my only hope to keeping it under 8 feet if that is even possible. I’m finding the dwarf trees easier to manage, might have to eventually pull the plug on my M-111 to avoid ladders.

Chris, waiting until winter to do heavy thinning will just invigorate the tree. Right now and then once more around September would be the best time to spank this bad boy, taking as much as 1/3 off of it. If you do that and bend the remaining branches down, you will have a much different tree next spring. When you bend the branches down, you may end up with water shoots coming up from the apex if the arch; refer to the thread on Espalier Reworked to see how to deal with those Espalier Apple Trees Re-worked

I wouldn’t worry about fire blight; the risk is worth it, especially when you just said you’re considering pulling the whole thing out otherwise.

I probably have not done enough limb bending on the M-111 so it is at least partly my fault the M-111 is not more productive but I am starting to wonder if or when will the M-111 tree production catch up to the G-11.

The limb bending is really a big, big deal if you haven’t tried it much. I began employing this a few years ago as recommended by Alan and others. I couldn’t believe what a incredible difference it made.
I suspect the dwarf will be long dead when 111 reaches it’s peak…and it will likely maintain that for a long, long time.
I’ve recently decided I’m done with dwarfs on all but fence espaliers. PIA imo, but the early fruit and ease of spraying etc is certainly nice.
Your trees look very nice and healthy btw, but way too much upright vigorous growth. Limb bending is in your future and right now is a good time to do it.

The limb bending is really a big, big deal if you haven’t tried it much. I began employing this a few years ago as recommended by Alan and others. I couldn’t believe what a incredible difference it made.

This is some of the best advice I have gotten also. The limb bending guidance from Alan has been a jump start for me to get more fruit earlier. It appears to work on standard size trees as well as dwarfs.

It seems like carbs are shuttled more efficiently to the roots with greater gravitational pull- the more that carbs remain in the branch the more they are used for fruit production instead of vegetative growth. Festooning (pulling below horizontal) is the most radical way of keeping the carbs in the branch, but often creates the greatest rebellion from the tree in terms of creating water sprouts- but once fruit forms, less energy is available to the rebellion. If you brush off the sprouts early in their development more carbs will be available for fruit.

Festooning (pulling below horizontal) is the most radical way of keeping the carbs in the branch, but often creates the greatest rebellion from the tree in terms of creating water sprouts-

For me, the damned water sprouts are the only downside to bending. Where I found bending to be most useful was with seedling stock that provides a ton of push (I’m thinking M111 is probably pretty similar). If you wait too long (like I did), the vigorous uprights are tall and thin. You pull them down and then the following year pop, pop pop pop the fruits appear. Great…right? Yeah, it is, but now the fruit load pulls the branch even more horizontal resulting in even more water sprouts. Pull them as horizontal as you dare if you want to remove the stakes more quickly. They will slowly start an attempt to get vertical again.
I used cedar wood shims easily driven into the ground with a notch (so easily made) with a utility knife to tie the string to. I used mason’s twine with a bit of rubber tape loosely laid around the branch. I used this because it’s what I had handy. I’ve seen coat hangers cut and bent into an “L” shape used on other sites. Anything that holds the branch down will work the same no doubt.
It’s a great tactic and technique, but be aware, water sprouts will form and they will grow like mad.

Chis in Georgia’s tree is a prime example. Thinning as applenut says and bending will put a ton of fruit on that SOB, but it will no doubt WS like crazy. It’s still the right thing to do. That’s gonna be a nice productive tree I think.

Oh…wanted to mention. Chris, you won’t have to bend them for very long. It can be a pia for mowing and whatnot, but it only takes about 2-3 weeks tops. They will maintain enough of their horizontal growth to get the desired effect next year. More fruit and the limb will thicken greatly.

In the old apple trees I manage, major scaffolds are usually below horizontal as the weight of fruit over the years tends to train them that way. It provides me with about 2 months of high paying work doing the summer pruning of these huge old trees- but lots of water sprouts also come from the trunk itself.

In Europe it is common to train trees on more dwarfing rootstocks to a weeping branch structure. Presumably the cost of mopping out water sprouts doesn’t exceed the rewards of early cropping, which also reduces vegetative growth in itself.

The M111 will catch up with the G-11 when the zip ties on that post break and the wind uproots the G-11 two weeks before harvest.

OMG…never have truer words been spoken. Just happened to me a few weeks ago, but in my case, it snapped off at the graft union. Worse still, it wasn’t a Geneva RS which is known for it, but rather a Malling dwarf. The part about the early fruiting and pulling down the limbs enhancing fruiting is also spot-on.
As I said, for me…dwarfs are history here except on fence espaliers.

Yay. I also vote for apples harvested from actual trees! Of course, I do have a vested interest in a plant that requires a great deal of skilled pruning. This single activity has been half my business for 25 years.

I also vote for apples harvested from actual trees! Of course, I do have a vested interest in a plant that requires a great deal of skilled pruning. This single activity has been half my business for 25 years.

OMG…never have truer words been spoken

Well, I took applenut’s expert advice and gave the Goldrush tree a pretty good pruning. I realized that it was mainly water sprouts that was giving the tree the bush look. I have had good success promoting spurs during winter pruning by following applenut’s advice and cutting the side branches and water sprouts back to a couple of leaf buds but at least for my M-111 trees, looks like I will need to be doing this kind of pruning during the summer as well and hope it does not create a FB outbreak. 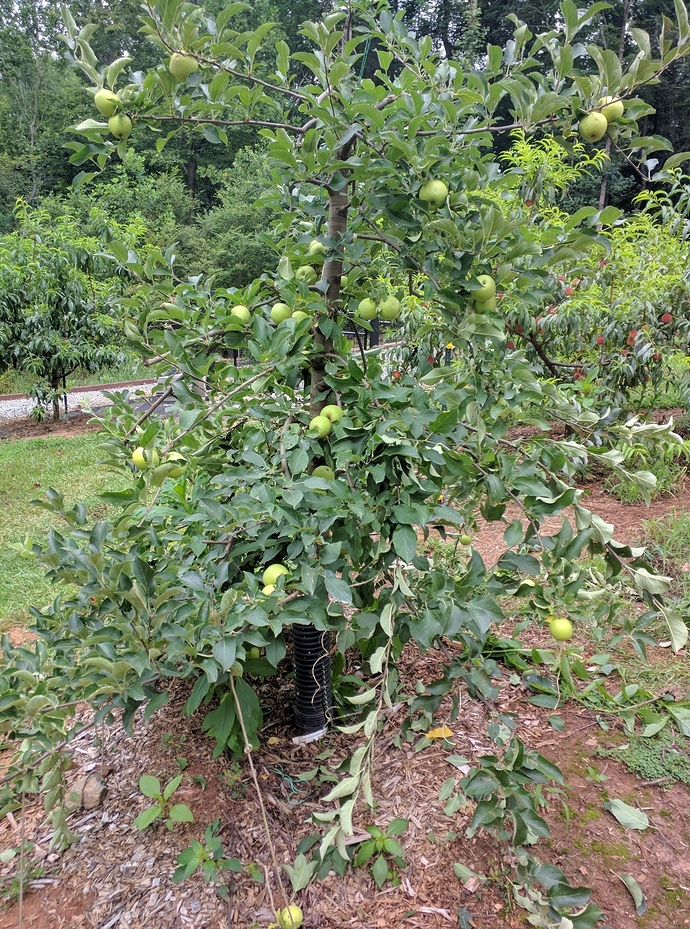 Looks good Chris. It appears like you had previously bent some limbs. My not so experience with FB is that most of my damage has started around bloom time but I realize that is not the only time that it can be a problem. Goldrush is known for its FB resistance and my thought are that you will have no issues. CAR yes but not FB. Good luck, Bill

applenut, Would m111 work well for a 8 foot wide belgium fence? If not what would you suggest? Thanks! - Paul

Here is Sansa or Zestar on M-111. Did this from second year in ground. 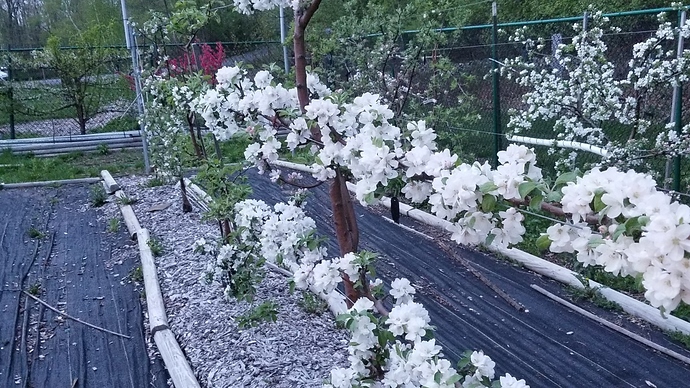 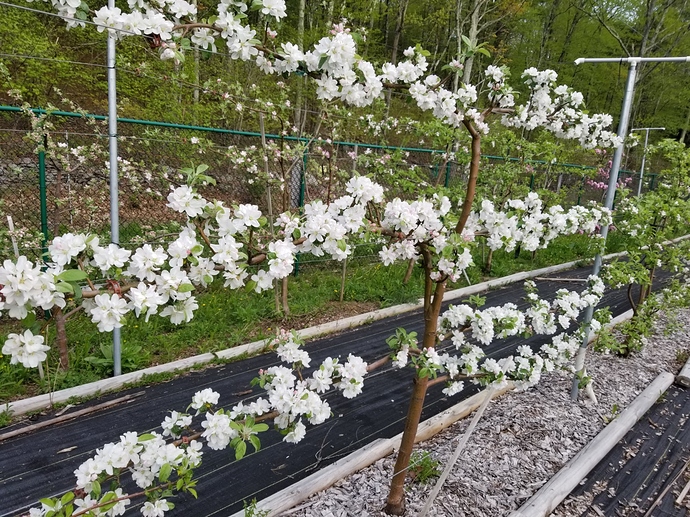 So impressed with your espaliers, even if Sansa and Zestar are precocious and ideal candidates for your system. You are making fruit happen.

Looks great on a horizontal cordon. I’m surprised that you got second year production. Do you think it would work for a Belgium Fence? I’m wondering if the trunks and the branches may get too thick and ruin the whole idea of a Belgium Fence that close together. Also would there be enough room for the roots that close together? Another concern would be how long they would take to fruit at a 45 degree angle as opposed to 90 or more.