Hi. Sorry for the late reply, but I had trouble being able to reply, due to the site not recognizing me, for a while.
When you talk of different species, are you referring to Nosema?

And, they may harm other larvae, like the fireflies?
If that’s the case, then I’ll keep using my topical potion, as inconvenient as it is.
I think it may work. Every time I looked at a Henry’s Golden Gem apple bud graft, that was growing, there would be a little grasshopper munching on it. After I started spraying it, I never saw one on it, again.

No, the nematode species aren’t related to Nosema locustae. The species sold for grub control are limited,and I’ve set up one link. I have used them to try to control grubs and adults of the Black Vine Weevil on some Rhododendrons. The larvae for this pest are mostly found in the ground beneath the plants they attack, so it’s very easy to know where to release the nematodes, using a watering can. They seemed to take care of the problem.

Reading about parasitic nematodes I have seen claims that they don’t attack beneficial insects, but there are no details offered. They certainly aren’t a threat to anything which isn’t living in or on the soil
surface. I also see that you can even buy them on Amazon.

Since grasshoppers are so mobile the location of their larvae would be really herd to predict. Like Japanese beetles they are everywhere and nowhere, so you would have to treat a very large area, and getting one batch doesn’t mean they won’t return. Your best strategy, to me, would be to expand on what you already do. That is spray the plants you want to protect with a substance which tends to repel them. If it also can kill them, so much the better. But there isn’t much that will kill pests and not affect beneficial insects if it’s used in great amounts. Spinosad will work on younger hoppers, but not as quickly
https://www.maine.gov/dacf/php/pesticides/documents2/master%20gardeners/insect_parasitic_nematodes.pdf

I have been seeing a few parasitic wasps oviposit in swd infested fruit this year. To the naked eye, they appear to be the same as last year, but I have not scoped them to be sure. 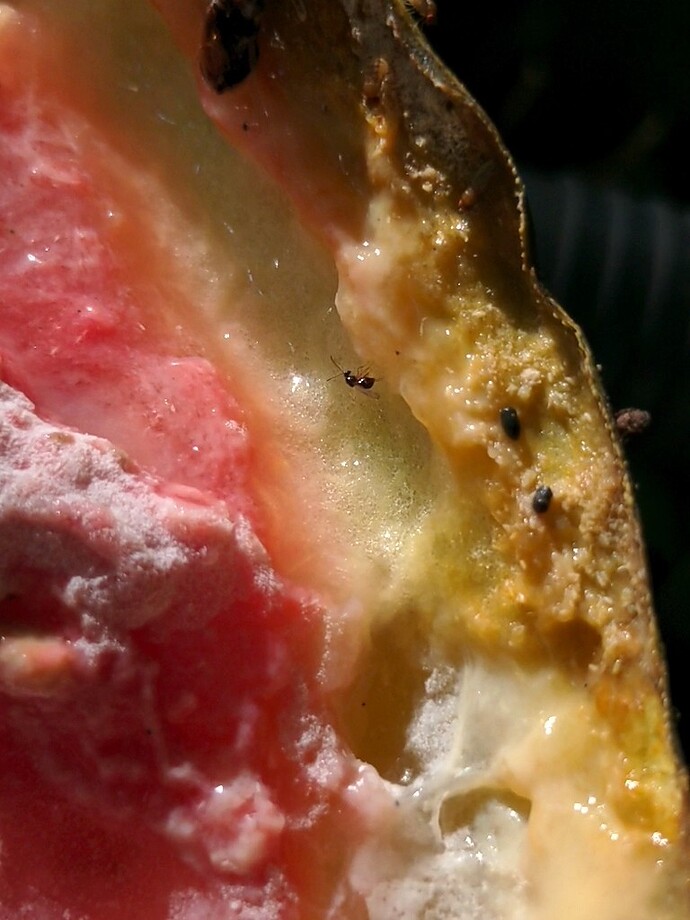 I also just saw a contraption that you can dump infested fruit into that traps swd, but the smaller parasites can get free. So I might experiment with that instead of bagging infested figs to kill ff larvae. Pests In, Parasitoids Out: The Augmentorium for Biocontrol in IPM

What did you use to take that macro image?

The microscope I used for the closeup was this one.

Thanks, but I meant what camera you used for the close-ups on the fruit. They are pretty good images.

The ones from last year were taken with a 2020 Moto g stylus, and the last with a pixel 5a.