The sweetest of all for me is tayberry. When fully ripe it has little if any tartness. Tayberry has a unique flavor and reminds me of strawberries. It tastes more like a gummy bear then a jolly rancher.

The sweetest of all for me is tayberry.

Loganberry is a cross between a raspberry and a blackberry.

Tayberry is a cross between Loganberry and Black Raspberry

Boysenberry is a cross between Loganberry, Raspberry and Blackberry.

One that interests me is Wyoming Black Raspberry…which is actually purple. It is a cross of a blackberry and raspberry. I have seen pictures of berries the size or a quarter in good growing conditions…but its a favorite of the cold weather growers…so the berries are smaller there. All reviews point towards it being an excellent berry… but its unobtainable. Unless you live in Canada. Im not entirely sure its classified as a raspberry. Canes grow reported 20 feet or more and is very vigorous. I want to think its superior to Loganberry in taste but not size.

If it is purple that would be the 3rd purple around.
I do favor the hybrids myself. I have an Ontario wild black raspberry and it is disease free, or 100% asymptomatic. I use it in crosses and crossed with Niwot and got a 2 crop Black raspberry.

My cross I call Lynn’s Black
Compared to a quarter 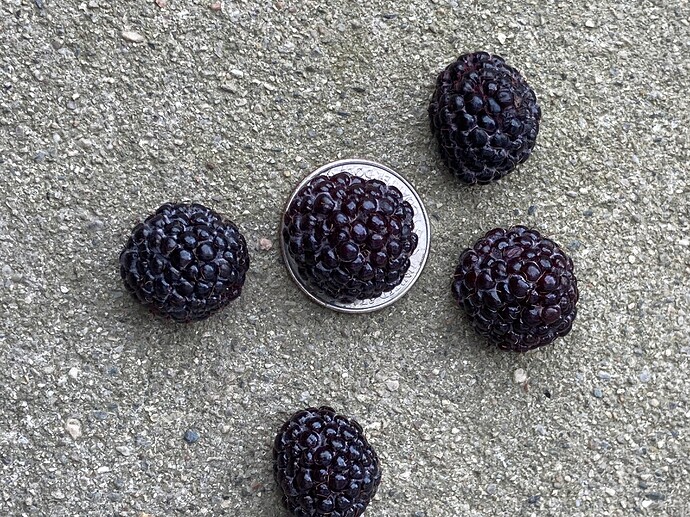 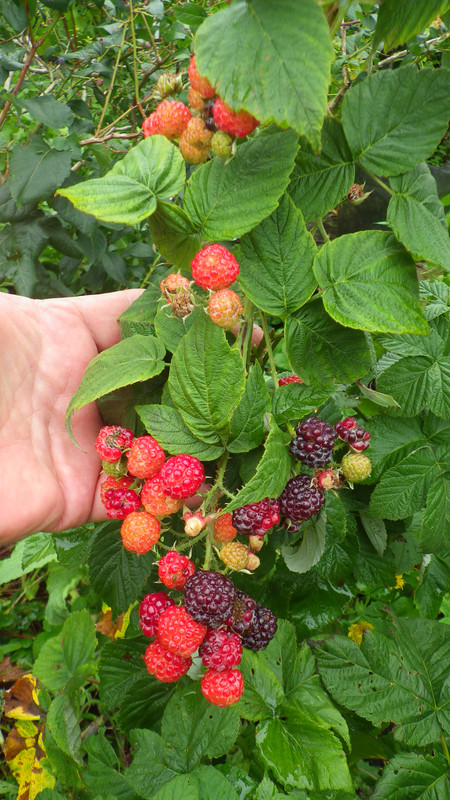 Tayberries are a little smaller here in the cold 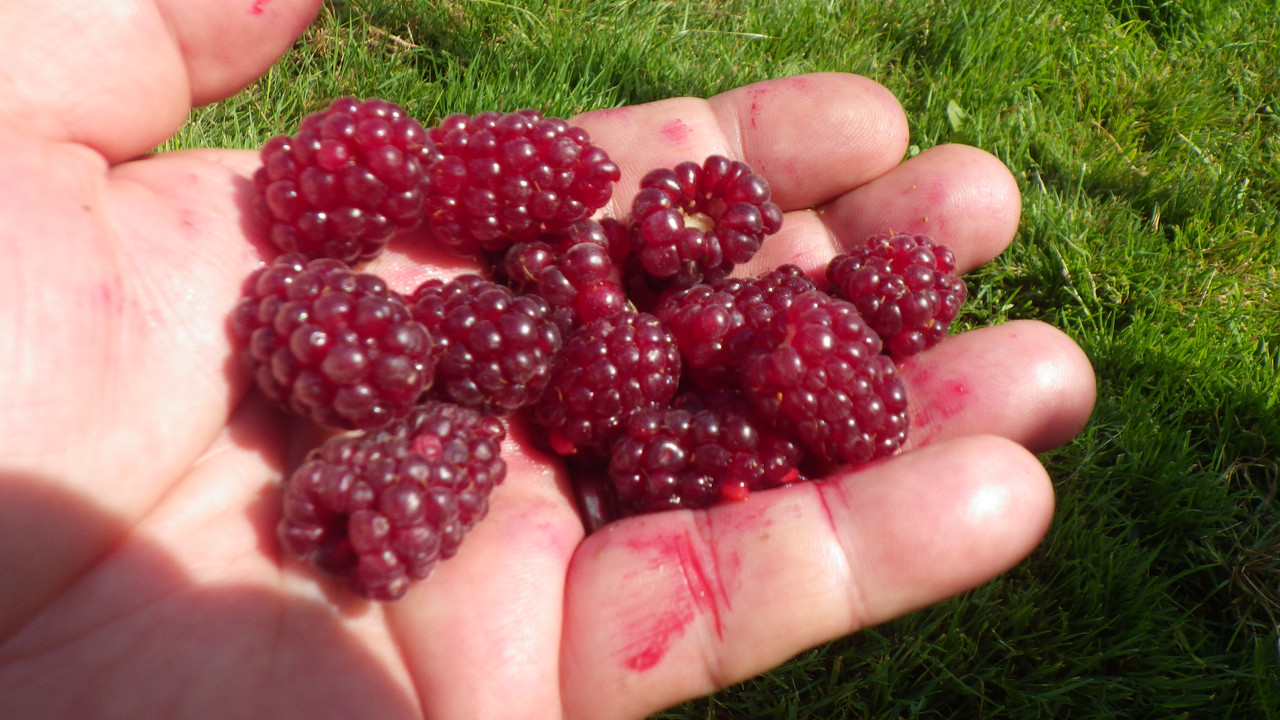 My Ontario wild black is not a black cap it is a brown/yellow cap. Gene appears to be recessive. I have to back cross it to get this color. 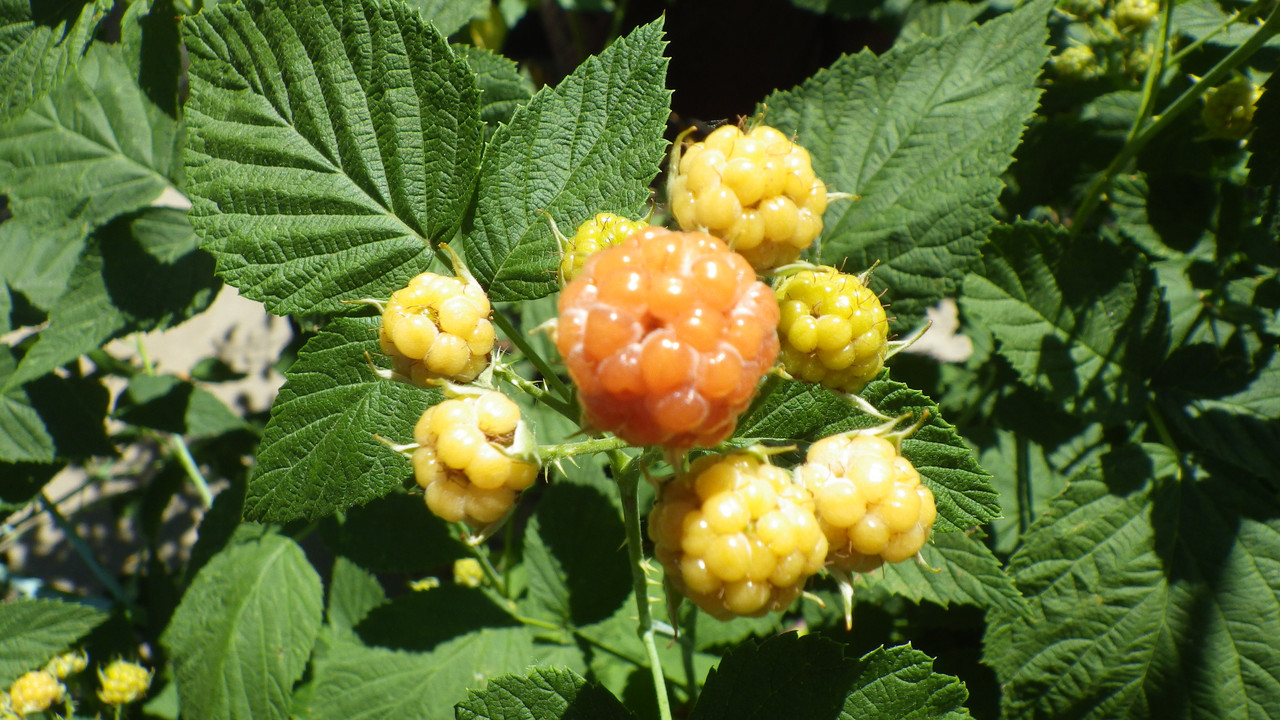 I’m hoping to get a taste of the ones I planted last year, seems very promising. 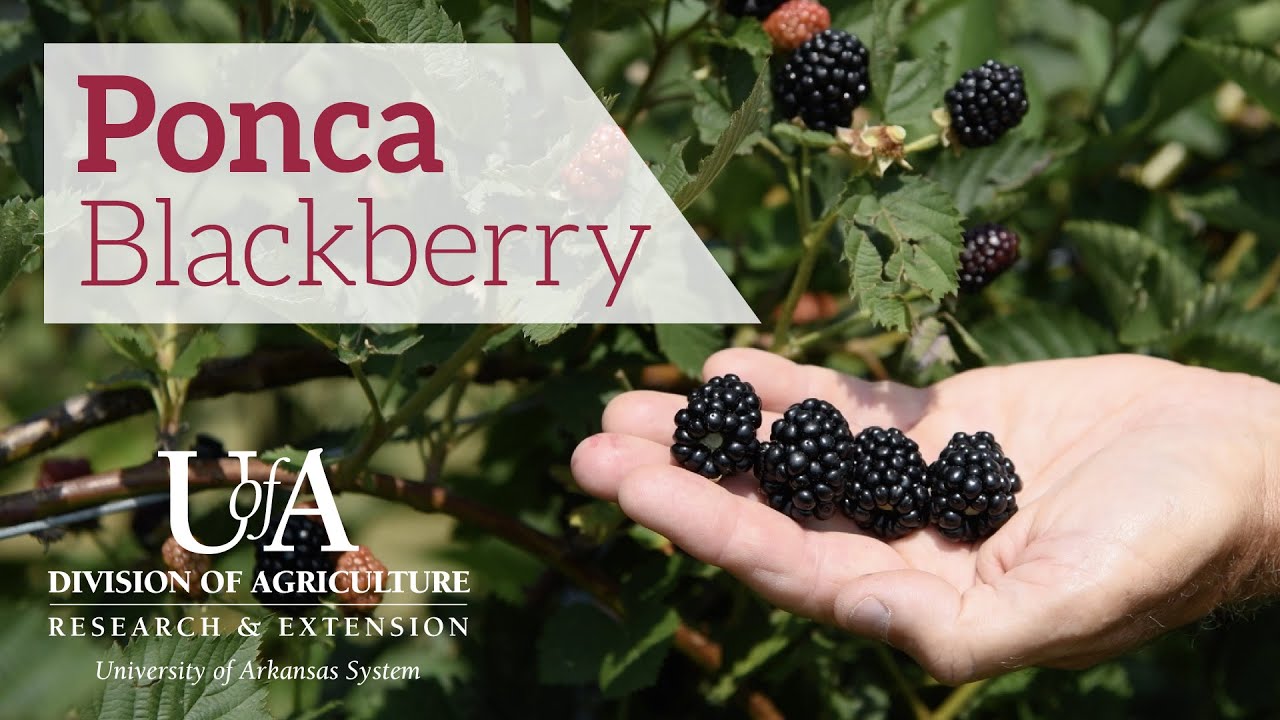 Tayberry is a cross between Loganberry and Black Raspberry

do you have a source for that?

if not seen any DNA analysis though.
Black raspberry also has chromosome number 2n=14. So it could definitely be possible. (Red and black raspberry’s have also been crossed = glenco)

I planted some too. If I can fight off the deer it should produce a small crop this year

Im not sure where i came up with black raspberry… anyways here is my source which is pretty old.

.
My info came from a Univ of Vermont Extension which is a pretty decent article.

The Loganberry was made in the early 1880’s in California by a horticulturist with this name. It resulted from crossing the European red raspberry cultivar ‘Red Antwerp’ with the American blackberry cultivar ‘Aughinburgh’. The conical red fruit wasn’t flavorful, so not popular, but this hybrid was used in further breeding.

Crossing the loganberry with a raspberry in Scotland in 1962 gave us the Tayberry, named after the Tay river there. Its red fruit are larger and sweeter than the Loganberry, and ripens mid-season.

A cross in the 1980’s in Scotland between the tayberry and a hybrid seedling gave us the Tummelberry. Its deep red fruit are conical, late in the season, and retains the core when picked.

Similar to the tayberry is the Wyeberry, only it is more winter hardy and tolerant of fluctuating temperatures, but quite thorny. It looks like a red raspberry, tastes like one with some boysenberry flavor, and has higher yields than many raspberries but fruit may be hard to pick. It was developed at the University of Maryland.

Many have heard of boysenberries, most likely from syrups or jams, and in particular the ones that made Knott’s Berry Farm famous. This fruit was a 3-way cross between the loganberry, a raspberry, and a blackberry. In the 1920’s, a berry farmer named Knott from southern California and the USDA breeder George Darrow (as in the Darrow and Olallie cultivars, among others) visited the former farm in northern California of a man named Boysen. There they found some vines Boysen had bred, hidden among the weeds. Knott took these back to his farm, nurtured and began cultivating them, and in 1932 began selling the popular large and tasty dark berries at his then farm stand, and named them after their original source. You may find plants both with or without thorns.

The wineberry (R. phoenicolasius) was introduced from Asia both as an ornamental, and to breed with raspberries. It has naturalized since then in the wilds in many areas and has become invasive. The Marionberry is actually just the cultivar Marion of blackberry (named for the county where it was tested in Oregon), being a hybrid of two other blackberries. Similarly, the Olallieberry is the cultivar Olallie (from the Chinook name for berry) —a cross of youngberry and loganberry.

I usually find extension sources to be really reliable. But it’s not in agreement with other sources. (like the person who bred the tayberry, or the institute that released it)

But it’s not in agreement with other sources.

After this im done highjacking the thread…

With a little bit of sleuthing…his source is from The Fruit Gardeners Bible…which is a pretty good reference.

The text in question should be highlighted on the link.

Well the book is obviously incorrect. It sucks as we count on books like this. It brings the whole book in doubt now. As the actual breeder who works at a world renowned institute says otherwise.
What I didn’t like was the comments about loganberries. For one they are used a lot in breeding but you can buy plants in multiple places. It certainly is a success by any measure.
Good catch here, great info! That book has passed a lot of misinformation around. I would have thought it was true too.
Wyeberries are nothing like tayberries. And I can’t tell the difference in taste between boysenberry and wyeberry. I grew them side by side for about four years. I observed boysenberry has smaller berries, ripens a week later than wyeberry. And had more cane loss over winter. I was going to keep both but after two years of all canes dying in the winter I removed the boysenberry. The roots were fine. Seems the wyeberry is almost exactly like boysenberry. I got the wyeberry from Edible Landscapes and the boysenberry from Raintree.

if not seen any DNA analysis though.

well no, but I don’t doubt the breeders claim (he wrote the article). Derek Jennings the breeder has many released cultivars under his belt. He is very well respected. The Tayberry is his, Some great stuff in that article, thanks for the link! . Jennings was working for the Scottish Crop Research Institute that is very well known in the fruit world. I have followed what the UK has been doing with fruits, some awesome work going on. The article mentions a few new cultivars. Work with fruit trees is going on too. I hope to see more out of this program in the future.

Jennings was working for the Scottish Crop Research Institute that is very well known in the fruit world.

Yes i know. That’s why i posted the link from the history of the tayberry (written by him) and the link from Hutton (Scottish Crop Research Institute merged into Hutton)

The breeder and the institute that released the variety seem like the most reliable sources.

However, it was bred and released quite a while ago. When DNA testing was not common. So it’s not unthinkable that there might have been a stray bee or other way that lead to the parents of the tayberry not being a Red raspberry and blackberry but a loganberry and a raspberry.

It would not have been the first fruit variety that years after release was proven to have different parentage than expected.

However until i see proof otherwise, I’m going to assume the tayberry is a cros between a red raspberry and a blackberry.
And specifically

‘Tayberry’ is a hybrid between a tetraploid raspberry and ‘Aurora’ blackberry

btw did anyone notice Nikki Jennings on that page? Probably related to Derek Jennings.

I pretty much agree with your statement. Although when I breed rubus I strip the male pollen before the flower is open. I also bag the ovaries with an organza bag. I’m fairly confident the technique works. I have bred three raspberry plants so far and I know it worked. As the traits of the pollen was obvious in the offspring.
I still have a couple crosses I would like to do. I want a primocane fruiting yellow cap. And I would like to cross tayberry and marionberry. I believe they both have 42 chromosomes.
Marionberry is the king of blackberries. No matter how simple the hybrid it is the king. The most complex flavor by far. Tayberry is super unique and any offspring with Marion must be amazing.
Speaking of complex New Berry has Marion and Logan in its lineage. It is the latest super cool blackberry raspberry hybrid. Over 30 cultivars are in its linage. I think it’s the best berry to come out of the Oregon program. By far!!! The Oregon Columbia series sucks compared to New Berry. It may surpass Marion. It’s that good. Although it is an interspecific cross and Marion is all blackberry. So it still holds its crown of king of the blackberries.

i think both the book and extension source have made an error.

In this paper i found
https://ibn.idsi.md/vizualizare_articol/77151

Tayberry is a hybrid obtained by the crossing of the blackberry - Rubus fruticosus and the raspberry - Rubus idaeus. The original plant was selected from a family of seedlings resulting from a cross made in 1969 at the Scottish Horticultural Research Institute, Dundee, UK, between the octoploid blackberry Aurora and a tetraploid raspberry 626/67.

is also an amazing source.

Heirlooms like these are much sweeter than primark 45 and freedom Blackberries by the gallons but that’s not to say the fruit are not seedy and plants unruly and shamelessly prolific.

And I can’t tell the difference in taste between boysenberry and wyeberry. I grew them side by side for about four years. I observed boysenberry has smaller berries, ripens a week later than wyeberry. And had more cane loss over winter. I was going to keep both but after two years of all canes dying in the winter I removed the boysenberry.

I have the ‘thornless’ Boysenberry from Pense… got it as a plug last year so wont know much for awhile. Currently the plant is super thorny…

I recently bought Boysenberry plants from Mr. Boysens grand daughter who claims that the family has kept the original canes in the family since the beginning.

I found a site selling #43 and Riwakas Choice Boysenberry… which are i think after the New Zealanders have messed with them. Both say Zone 5-10

Wyeberry sounds to be a superior berry to them all. I will likely just stick with Ms. Boysens family heirlooms and see how they do. I will buy Wyeberry if/when it ever comes available again.

I would rate it to zone 5 too. Just no fruit. The plant roots and crown can survive the cold. The canes cannot but that won’t kill the plant. Someone sent me some Knots Berry farm products in the past. Truthfully I was not impressed. Way too much sugar. The berries are so awesome in my jams. I was greatly disappointed in the commercial product. I ended up throwing it out.

I found some more crosses that arent talked about much…

Lavacaberry The LavacaBerry is a hybrid between the loganberry and boysenberry,

Sunberry - Sunberry is a cross between a Raspberry and Blackberry. The flavour is like a Loganberry.

Asterina is great choice for areas with mild climate (warm winters and not hot and wet summers), I think. I have one bush. In my conditions (long, hot and dry windy summer) it shows bad results, fruit are easily damaged in the sun and buy air temperatures over 82F, fertility is low. But the berries, which ripen in the penumbra, are very sweet indeed.

At my farm the heirloom called health berry is the sweetest. It’s very large, aggressive and not really for a home grower unless they have a lot of room.