I grafted that this morning, I use the red wax that comes on baby bell cheese to seal the stump and the tip of the scion. I carry it in my pocket and it stays just the right consistency. Once you put it on the graft it stays extremely well. It will still mostly be there next spring

You are way ahead of me this year. The cold front came a few days ago and We had sleet and light snow last night. I did some fig rooting with the Baggie method last night but grafting will have to wait for another few weeks.

Tony,
I’m in between you and Jason and we are cooler today but no ice or snow. We had a little light rain but it wasn’t much. TS Hardy is a strong growing pear!

We will have to see if it takes , that is a strong growing ornamental pear rootstock of some kind, may make a big tree, lol

How are your paw paw seedlings by the pond doing last year? Are you starting some jujube seeds this year? I going to try to root some Honey Jar and Li green cuttings with rooting hormone in sand and a zip lock bag to cover the pots for humidity in late May. I did this method last year with some other plants and they rooted for me.

I’m growing some seedling jujubes and a friend did give me seed as well. The pawpaw look great but they have been growing slowly. No tip die back this year so I can’t complain. About 1 in 4 pawpaw lived through the first winter because of the cold. The pawpaw remaining are cold tolerant. I have a bag of pawpaw seeds I will soon be planting. Sounds like a great method for cuttings it is exactly what I would do. Have you seen any Atago scions around Tony? I’ve wanted to grow it since it’s the current world record holder. “11 NOVEMBER 2011
The heaviest pear was 2.948 kg (6 lb 8 oz) and was grown by JA Aichi Toyota Nashi Bukai (Japan) and presented at the JA Aichi Toyota main office in Toyota, Aichi, Japan on 11 November 2011. The pear was an atago pear. This variety is the biggest pear in Japan and it is original from the Okayama prefecture.”- guiness book of world records

My two biggest pears are Korean Giant and Mishirasu. Six pounds Asian pear you are after is a beast. Lucky Pittman gave me a bunch of Asian pears scions about eight years ago and that name sounds familiar but he mays have some infos on that one. I am only grafts a few pears this year. My multigrafted pear trees are running out of fresh branches. Your little yellow pear, Drippin’ Honey to compare the fruit with mine, and a fragrant pear from another source until I get the correct variety. The USDA at Corvallis sent me the wrong variety about five years ago. I think you will enjoy my Korean Giant crossed with Mishirasu.

There are so many exceptional pears but many are being mislabeled unintentionally and others intentionally to sell more trees once inventory is exhausted. Many shady nurseries know it takes at least 6-7 years to name most pears under good conditions.

A thousand times yes. And sometimes the larger the nursery the shadier which causes even more damage because a big company puts many hundreds if not thousands of mislabeled trees out there compounding the confusion for generations.

@coolmantoole
I have friends who have more than 40+ mislabeled trees. Almost everyone I know has at least 1-2 mislabeled plants of some type. Many times I’ve chuckled getting black currants instead of red currants or something minor like that but I’m not laughing when I get a dead stick in the mail. Several large nurseries send out dead plants. Mistakes happen and some mislabeling can’t be helped if nurseries are not growing their own trees to fruit. They are subject to the mislabeling from their supplier. Guarantee some of my new and in some casss old pears are not what the label says! The even harder thing is that I may wait 15 years to find out what pear I’m actually growing.

Yes, and varieties overlap in appearance and habit enough that even when you get fruit you are not sure. It wasn’t until this season that I became sure that LeConte and Goldenboy weren’t the same thing. They are close enough that I just was not sure that they were different from the first two seasons. Just the other day, I saw figs at Lowes labelled as Celeste. The leaves were tightly cleft. I mentioned to the person with me, whatever those figs they are not Celeste because Celeste has widely lobed leaves. God bless.

This year due to the drought and many other issues i was unable to add any new pears. Did anyone else have success in growing new pears this year?

I added a couple each of Beireschmitt and Tyson. We’ll see if they survive winter now

( " Did anyone else have success in growing new pears this year? " )
@clarkinks

Yes, I did.
I have a shinko pear tree, about 3 yrs old.
Wanted more trees of these.
Was driving by a mall area, with the big box stores this spring.
Noticed all the Bradford pear trees.
And the unkept ,unmowed areas around the mall area had lots of Bradford seedlings ', Dugup 10 Bradford seedlings .
Took these home ,and grafted shinko on them.
Everyone took !
Planted out in the orchard here .
All of them look really good !
The funniest part of this to me was …"
I dug them up in front of one of those stores ,that was selling pear trees for $20.
Took me maybe 20 minuets to dig ,… A few minutes to graft. Time to plant .
Let’s sayin hour or so total .?
That’s A $100 --$200. An hour deal. More or less… Best paying job around here ! ! ! And fun . And I have 10 new pear trees !

Most of my pear grafts did OK this year as did the plum grafts. We had kind of a dry May, but other than that we’ve had a moist year. Things are a bit dry now, but here it’s supposed to be dry in October.

By the way, my Baldwin pear produced a 15 or so pears this year. It only produced two or three the year before last and not much of anything last year on account of a late freeze. The skin’s a bit tough and it’s not super soft, but I think it’s my best tasting pear. I got two pears off of my Acres home this year. The first one I ate a little to soon and yet it was still excellent. The second one was truly fabulous. Once the tree gets a little more mature it may turn out to be the best. LeConte pears were very good. The texture and flavor very much reminds me of a Golden Delicious Apple. Goldenboy was very good and very productive this year as always. For the first time I had fireblight issues with it, and I had a limb to split off. This year Southern Bartlett was super productive, but the pears were tasteless again. (Are there any tracks for improving the flavor pears? Tennessee had its first very productive year. The fruit tastes great but is astringent. It makes fabulous pear sauce. But a mixture of Tennessee and Southern Bartlett pears makes a better pearsauce. Tennessee brings the flavor, but Southern Bartlett improves the texture and takes away the astringency.

@coolmantoole
I will have a couple of new ones coming into production and will make sure to post pictures. If you have a chance to get photos Marcus when you can i would love to see them

The million dollar question is whether my pears survive the freeze being predicted for Tuesday and Wednesday. Weather.com keeps going back and for between predicting 27 and 28 the last three days for those days. That one degree can make a big difference in how badly the pears but especially the plums are damaged. My early pears are all bloomed out. Winnie and Granny Durden did not bloom at all this year and Southern Bartlett very little. Tennessee is blooming but in dribs and drabs. We got 524 chill hours, and it’s becoming clearer and clearer that Tennessee is not going to act right with less than 600 hours of chill. Baldwin and Acres Home bloomed well and are finished blooming. If the frost does not yack them, I should get a good sense of both trees this year. My Orient pear has about three flower clusters on it and is blooming now. LeConte, Goldenboy and Purdue are in full bloom. Purdue has the coolest looking flowers I have ever seen on a pear bread for fruit production. They are doubled and look like little rose flowers. They are also huge flowers for pair. Tennosoui, Scarlet are not going to bloom this year but are just now breaking dormancy, so I think their flowering will be late. They might even overlap some with the Asian pears. I’ve top work both Ayers pears out of existence. One has a lot of Olton Brouzard in it which is an Asian pear, but it also has some branches of other things. The other Ayers is now another Acres home with one branch of moonglow. The two pears that show absolutely no sign of breaking dormancy yet are Korean Giant and Savannah. I’m thinking those two will bloom together in early April when they get mature enough to actually bloom. Here’s a photo of Purdue flowers: 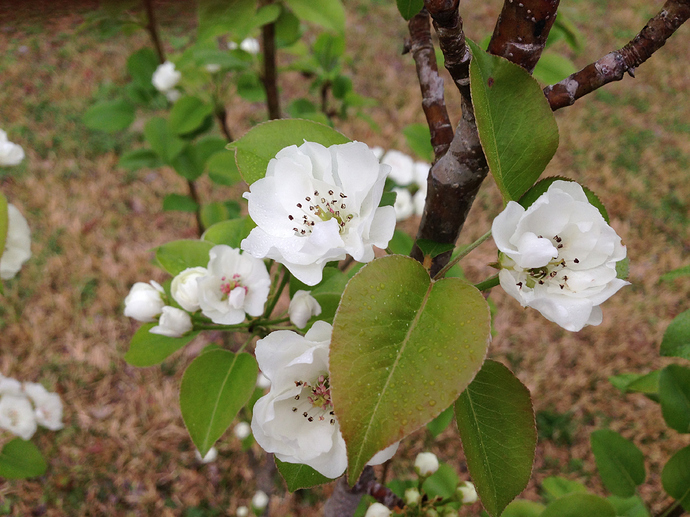 Those are beautiful blooms @coolmantoole i sure hope they make it!