So I finally got some time to take a look at the tree this year. This one always is a great producer. So let’s see what we can do with these. 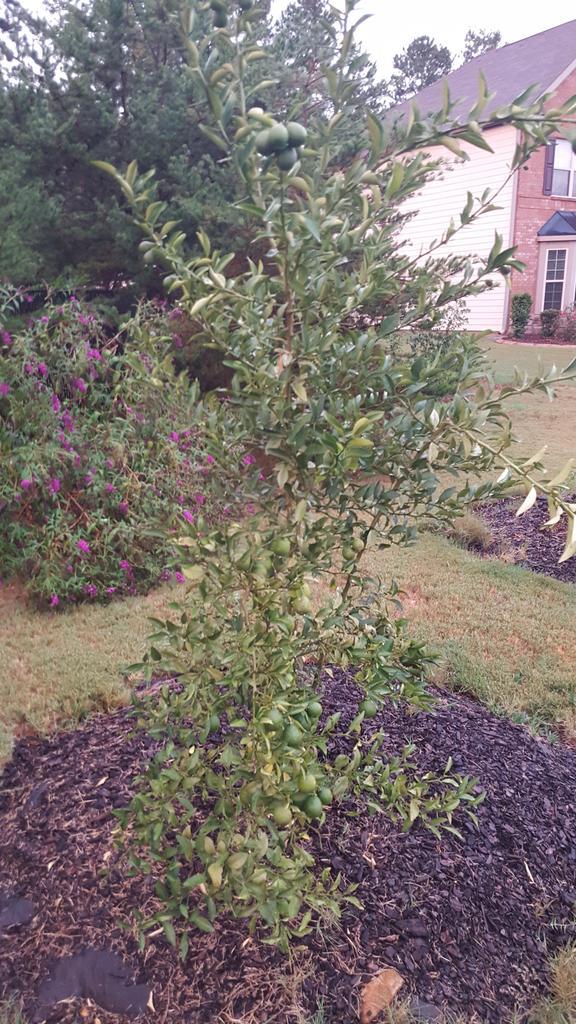 I picked quite a few fruit, but I still have enough for maybe 3 or 4 more of these… 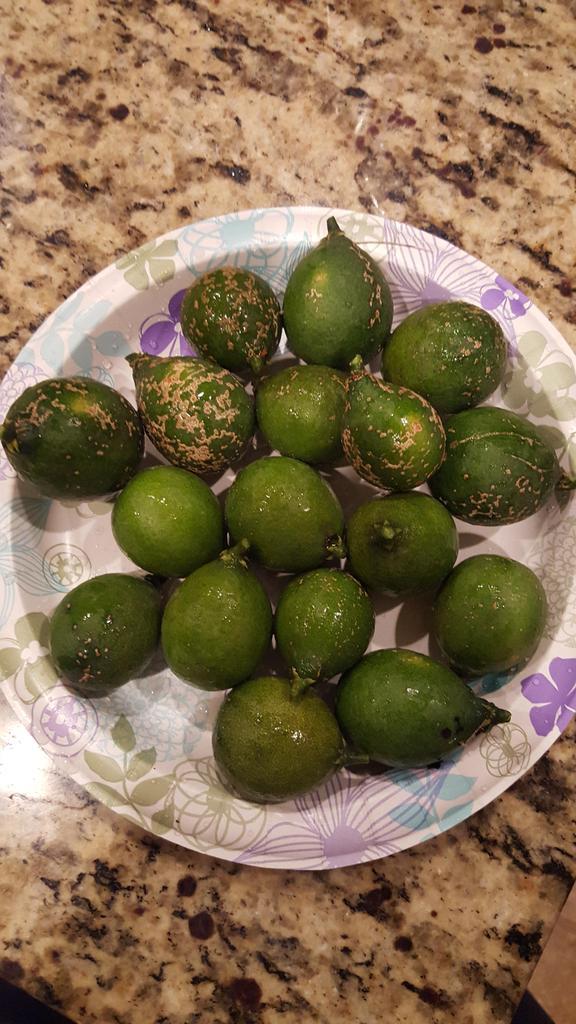 I actually needed less of these than I thought, because they are so juicy. The skin is very thin, but I was able to zest them easily enough. 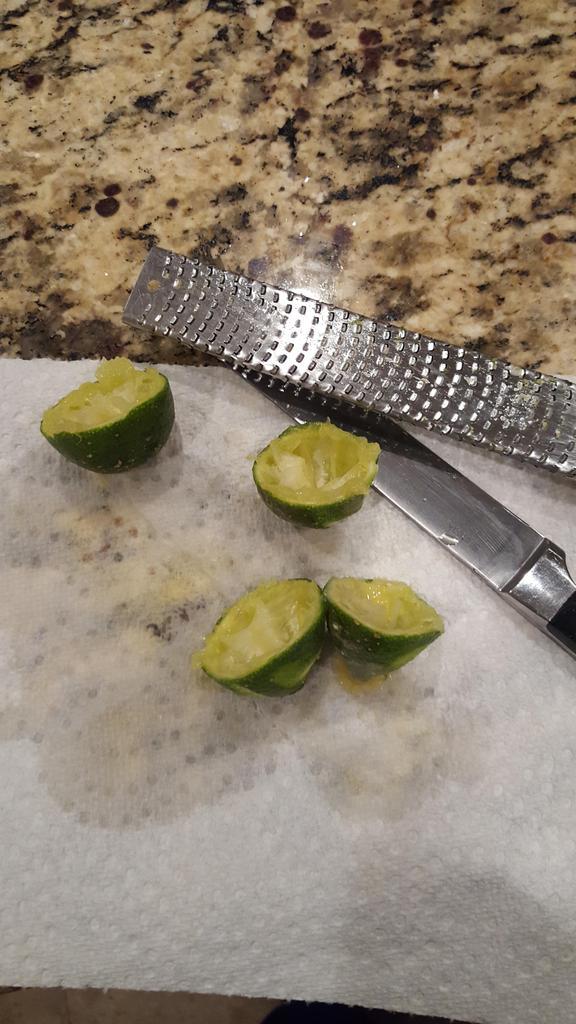 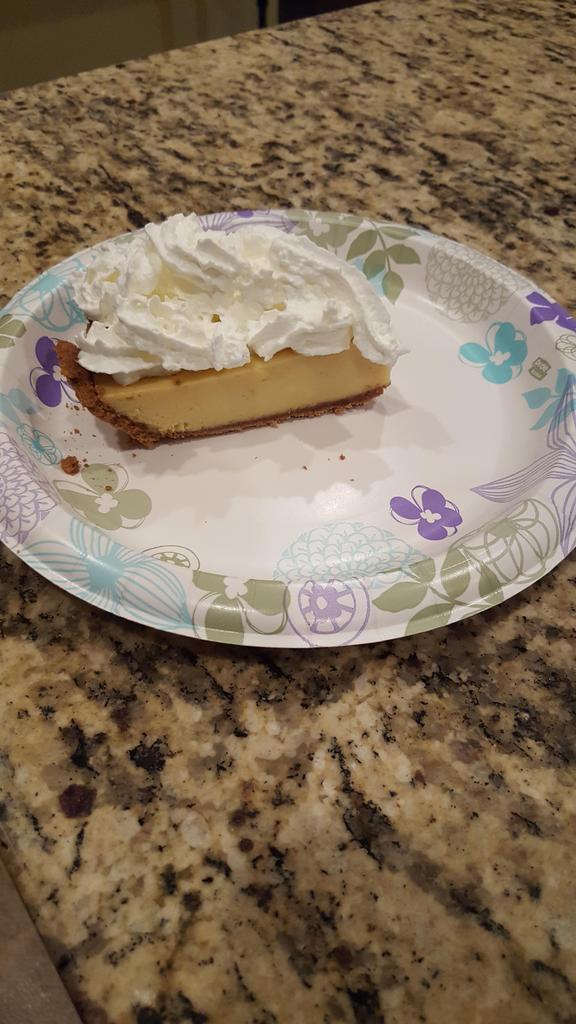 And my wife promptly adopted the first slice.

BTW, the remnants made an excellent margarita, if you’re so inclined. I think I’ll use some to make a nice persimmon and peach hot sauce since I have an excess of habaneros and fuyus this year…

The pie looks great! What does the citrangequat taste like?

Pie looks tasty. Key lime pie may be my favorite dessert, along with apple pie.

I’ve never heard of Citrangequats, what is it? I gather a kumquat and citrus hybrid, but what kind of citrus? Where do you live to be able to grow such a tree? Yer profile says 7b, so it’s obviously possible to grow a citrus tree there.

Funny I never heard of them either. Wikipedia says they are normally bitter. Some hybrid between an orange, and kumquat.

The citrangequat is a trigeneric citrus hybrid of a citrange and a kumquat, developed by Walter Swingle at Eustis, Florida, in 1909. Citrangequats are bitter in taste, but are considered edible by some at the peak of their maturity. Three named cultivars exist:

They look great and zone 7 hardy! Citrus has came a long way. Here in zone 6 we can grow trifoliate oranges and I have been successfully experimenting with them for 3 years. Here are a couple of zone 6 hardy citrus trees Citrus - Edible Landscaping. Maybe we can make a great looking pie like yours out of them if we get them to take off! What’s your recipe? Citrange are said to survive to 0 degrees Mckenzie-Farms. Our zone was upgraded from 5b to 6a. Anyone interested in cold hardy oranges can see this old post Oranges in Zone 5

It tastes like a lime when green. When they turn orange, they get an orange like flavor. I can eat them straight then, but they’re not as juicy when yellow…

There are a host of kumquat hybrids running around.
The kumquat tends to stay dormant for quite a while before it gets going. So if you have a citrus that tends to get blasted in the spring because it comes awake too early, you usually try to cross it with a kumquat and see if that helps.

I hear people say that it’s bitter, but I never taste that, just sourness. Bitter to me is like a Kaffir lime.

When you live in 7b, you can’t be a chooser though, if you want edible, in ground citrus…

Interesting, a cold hardy citrus tree. Does the breeding with a kumquat make it more hardy?

I didn’t even know what a Citrange was until today. Looks like I learned something new.

We are in zone 6b in NE KY, so I’d be skeptical that they’d make it here, even though @clarkinks says they can survive down to 0. His zone 6 is different than our Z6.

Here is what McKenzie Farms Nursery says about them "Citrange: We offer several species of citrange. Citrange is a hybrid between sweet oranges and trifoliate orange… These are very cold hardy and will grow and produce fruit where other citrus trees fail. Hardy to 0 F. We offer Benton, Rusk and Morton citranges as well as Citrandarins… a mandarinXtrifoliate hybrid.

Price is 20 dollars per 1 gallon tree"

This farm has 38 reviews and 38 are positive if you search them on google and look at their daves garden review. The search term I used was “whats the scoop on mckenzie farms”

Thanks Clark, I’ll check it out. A cold weather citrus, it sounds like an oxymoron. I wonder what their Vitamin C content is compared to warm weather citrus.

The vitamin content is much higher when the fruit is grown under stressful situations. I’m not the first one to come up with the idea of stressed fruit being higher in sugars & vitamins orchardist such as @fruitnut have used the concept for years when growing fruit. Here is an NPR article you might find interesting http://www.npr.org/sections/thesalt/2016/04/26/475739569/beneath-an-ugly-outside-marred-fruit-may-pack-more-nutrition. If you look at the citrange grown in the photos he posted above the ones with the roughest exterior skins are the healthiest.

Good for you with the healthy Thomasville, one of the underappreciated citrus with worthwhile uses. If you are a grafter, maybe you could consider putting a couple Satsuma or Page mandarin scions on higher-up T.C. branches, where the T.C.‘s good cold tolerance would be able to help protect the less-cold hardy grafted scions. The Miho Satsuma, Brown Select Satsuma, Page mandarin, and Hamlin orange grafts that were done here on 2 old T. C. trees at 7’ + height have done well even when exposed to temps below 20 degrees, the lowest being one 14 degree event that came when the grafts were less than a year old. One regret about ripe T.C. fruit is that they will not hold onto the juice inside if the yellow/orange fruit hang on the branches for a long time. Maybe you might want to consider planting some of the seeds to make more plants for rootstock purposes, or just to make more pies.

Thanks for the thread. Morton Citrangequat is one on my list. I just grow the trifoliate now. It bears every year. I heard that Morton tastes better.
John S
PDX OR

Approximately where do you live? Do you do anything to protect that Thomasville from the winter cold?

Nevermind. I see you are in Atlanta.

From where did you obtain your Thomasville citrangequat? McKenzie? JF&E?

I think i got it from Mckenzie.
But i also took seeds from the one in Savannah Coastal gardens. But Stan does have it.

Zero protection, and still chugging along…

Stan Mckenzie is very knowledgeable and trustworthy. manfromyard where are you located? Savannah?

I am in the Atlanta metro area. I went to Savannah for a conference and snatched some fruit from the old Citrangequat there and started seeds…

Manfromyard, your citrangequat seems to do fine in an open area without protection. I thought citrangequat needs to be in a wind hidden area to avoid north freezing wind. Is it still alive up to this date?

Did your tree grow on its own roots?

It is fine and still alive. It actually took some damage last winter because it was so warm. It’s a new danger now. Previously, we would be concerned that the temperatures would drop below what the dormant plant could handle. Now it doesn’t even get cold enough to reach dormancy, so even relatively high winter temperatures cause damage since the plant is still growing.
No fruit this past year, but should have some this year.