Today I received the January-February 2019 University of Kentucky “Fruit Facts” newsletter. In it, they specifically referred to vole control as referenced in the newly released 2019-2020 Midwest Fruit Pest Management Guide.

I have attached an excerpt from the document relative to the control discussion should this be helpful to others.Vole Control.pdf (69.5 KB)

I agree with just about everything in that excerpt, except perhaps the mulch. Certainly some mulches are much more of a vole attractant that others. Plastic mulch and hay are probably the most attractive.

In terms of wood chip mulch, I doubt even the fruit specialists have much experience with that, simply because so few commercial growers use wood mulch. There has been some research done with wood mulch in the orchard, but again it’s pretty rare for commercial growers to use it.

I think a lot of the fruit specialists simply lump all mulch into the same category. As I mentioned, the wood mulch we use here can’t really be made into tunnels for the rodents, if it’s applied good and thick. They can occasionally make an exit hole, but the wood chip mulch itself doesn’t provide any cover for them. Even plain dirt is a more desirable medium for rodents than wood chip mulch here.

I guess I keep repeating this about wood chip mulch because I see the results so profoundly here.

For what it is worth, I do hope my experience mirrors yours and I look forward to evaluating hardwood mulch in our particular application. The reason I became concerned about voles in general was as a result of an admonition from our tree fruit extension specialist to avoid mulch due to the increased risk of vole damage. Like you, I suspect the concern might be with ground cover in general rather that with hardwood mulch in specific.

Thank you again for your help and advice- and stay warm!

I guess I keep repeating this about wood chip mulch because I see the results so profoundly here.

Which is to say, you have massive anecdotal evidence with the behavior of I assume to be only meadow voles who have evolved in meadow-like environments. Pine voles, on the other hand, thrive in woods with heavily mulched soil, although a different mulch than wood chips. I’ve worked in orchards that had oak trees nearby, and pine voles seemed to thrive in the litter.

I also believe that you use mulch massively, while most home orchards have individual rings around trees with lots of mowed turf between rings. My anecdotal experience shows that meadow voles are willing to cross the wood chips to girdle apple trees, especially under the cover of snow.

I don’t know if wood chips encourage pine voles- as you mention, wood chips have different characteristics than forest litter and may do a better job of closing up holes, but I doubt rings of mulch would discourage them. What I do know is that I’ve had pine voles eat the roots of trees circled by rings of mulch. 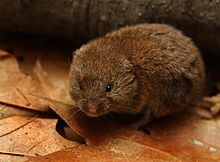 The woodland vole (Microtus pinetorum) is a small vole found in eastern North America. It is also known as the pine vole. The woodland vole has a head and body length ranging between 3.25–4.75 in (83–121 mm) with a 0.5–1.5 in (13–38 mm) short tail. Its weight ranges between 0.5–1.3 oz (14–37 g). It has a brown (light or dark) dorsal region with a whitish or silvery underside. The eyes,external ears and tail are reduced to adapt to their partially subterranean lifestyle.[citation needed] The w...

Voles are primarily vegetarians, feeding on grasses, tubers, and seeds. They also consume the bark of young trees.

My anecdotal experience shows that meadow voles are willing to cross the wood chips to girdle apple trees, especially under the cover of snow.

That could be a difference. We don’t generally get much snow, and when we do, it generally melts off pretty quickly. The 12+" snow we got a couple weeks ago is very unusual.

I thought I’d identified both types of voles in my orchard. Voles weren’t as bad this year, so I haven’t seen any dead ones this season to look at them. Just seen the evidence of their living quarters.

I agree my setup in the orchard is different than most backyard applications. Where we mulch, it is a continuous path of thick wood chips, not circles. The chips are applied with a loader bucket very thickly. We rake the mulch down by hand some, but it’s still really thick. The row middles are driven on with tractor, mower, sprayer. All pretty heavy, so it packs the soil down pretty hard and would collapse any burrows if they tried to build there. When it’s wet, it’s not uncommon for me to spin the tires on the tractor pulling equipment through there, or even driving the pickup through the aisles.

I thought from the material I read that pine voles aren’t native to KS.

I also believe that you use mulch massively, while most home orchards have individual rings around trees with lots of mowed turf between rings. My anecdotal experience shows that meadow voles are willing to cross the wood chips to girdle apple trees, especially under the cover of snow.

I agree my setup in the orchard is different than most backyard applications. Where we mulch, it is a continuous path of thick wood chips, not circles.

Thank you both for your detailed and helpful replies. My proposed approach to mulching currently is very much the same as Olpea describes- a continuous mulch floor within the extents of the orchard borders rather than constrained areas about each tree.

While I rarely see pine voles themselves- I do see their tunnel openings around the edges of our woodlots, though I have never seen any within the current extents of the orchard plot itself. I acknowledge that the planting of fruit trees will likely be just the incitement they need to move in.

Based on all that I have heard and read here (thanks in large part to both of you), it seems that regardless if one uses mulch extensively or not there are some general principles that apply for vole mitigation:

Thank you both again for your insight. I do sincerely appreciate it!

I thought from the material I read that pine voles aren’t native to KS.

Not native to most of KS. KS is a pretty diverse climate. In western KS, it’s desert, tumble weeds and all. Central KS is more prairies, called the flint hills. Those get burned every year. Extreme eastern KS where I live is more like MO. I’m only 3 miles from the MO border at my house and my
orchard is across the line in MO. These areas have quite a bit of forested land.

According to the Wikipedia link you posted, we are in pine vole country. 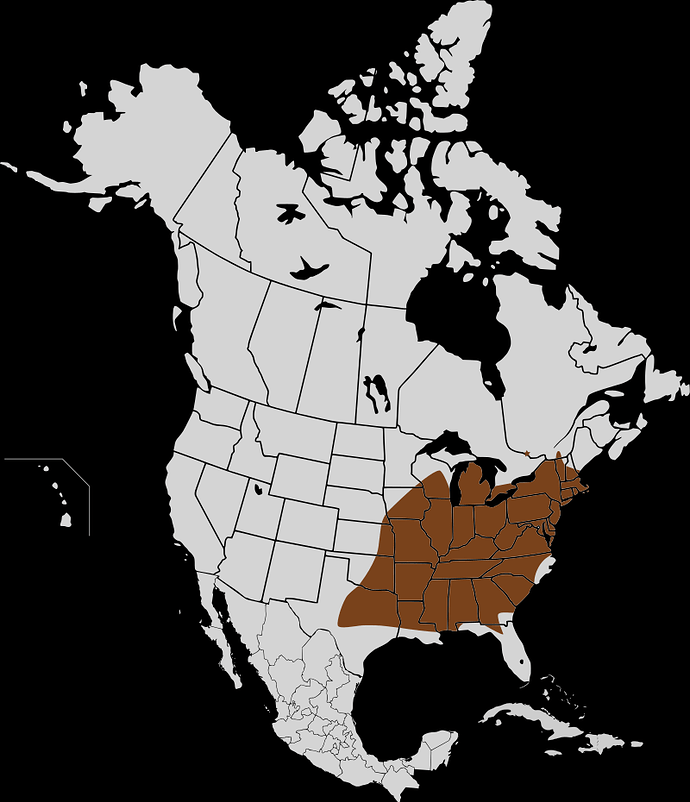 Your list is exactly the proactive approach one should look for. Sounds like you’ve got a great handle on this.

I do appreciate your help.

One trick to finding vole holes is:
When the temps are in the single digits,as they will be in many areas ,say tomorrow morn.
There will be a ring of crystalline frost around their hole.from their moist breath freezing at the entrance .
This is a good way to find “active holes” that otherwise may go unnoticed .

Now this is a great tip- I sincerely appreciate your experienced advice! I am going to put this one in the toolbag…

One more question about vole guards- what about using grow tubes?

I contacted Mr. Tom Mills at https://www.treepro.com/ and asked him if they had any feedback regarding the use of tree tubes for the purpose of subterranean activity. Specifically, I noted in the FAQ’s they cautioned against burying the tubes (referenced below).

He mentioned that he had several growers that use their tubes in pine vole country without issue- their reason for cautioning against burying the tubes is the subsequent difficulty in removal.

He also said that many growers throw moth balls in the bottom of the tubes to dissuade mice from taking up residence- he mentioned that mice were more likely than voles to attempt habitation within the tubes themselves.

“ISN’T IT A FACT THAT MICE AND VOLES GET INSIDE THE TUBES, ESPECIALLY IN WINTER, AND THAT THEY OFTEN KILL THE TREE?

This is a bigger problem with our competitors’ products than is with ours. Tubes that aren’t vented, especially those that are pressed down into the ground, provide a cozy, comfortable place for critters to nest.

Our protectors and shelters can be vented or opened, which increases air circulation. During the winter, mice and voles really don’t find vented protectors offer much protection from the weather. In addition, we don’t recommend pressing the shelter into the ground. It should be snug to the ground but not stuck in the ground."

plastic coils are cheap and don’t create any habitat at all- at least not for voles.

Good point, Alan. I appreciate you keeping me grounded in reality.

Even aluminum foil works well, and is recyclable.

Just wanted to let you know that I finally was able to read the Colorado State publication you shared with me. They mentioned Vexar plastic mesh cylinders for vole control. Looking this up, this looks like another viable option for vole exclusion- just thought I would share:

They (and several Western publications I found when searching Vexar) recommend burying the cylinder 3 - 6" in the ground and extending them 18" above grade.

Always like to share this LINK when talking about wood chip mulch. I cannot speak for years of experience but this guy can. I am modeling my home garden after this grower from the excellent progress that I have seen so far. Plus you cannot put a price tag on free wood chips AND eliminating mowing/mitigating weeds throughout an active garden in full growth.
After 2 months I have seen fungal growth and development in the area of the pile that is moist… a positive!
As far as fruit trees are concerned, I may take the route of sheet mulching the area of the tree base as opposed to a single layer of wood chips alone, whether that be part of a larger mulched bed or circles around the tree. Have one week to decide before a shipment of bareroot’s arrive.

if you think about it mulching is mimicking a forest floor. your adding to the soil every time you’re adding more mulch. i sometimes add different stuff to the mulch around my bushes/ trees like small trimmings, grass clippings, leaves and straw to add different nutrients to it. almost like a compost pile around your plants. a little diluted urine occasionally adds some N to the mix and gets it breaking down quicker.