That is an amazing amount of plum jam! How many trees did it take to produce that much jam?

Just 1 ten year old Methley. I over cropped it. After eating probably about 15 gallons, canning 15 gallons, and giving away 5 gallons another 20 gallons more or less rotted. Really regret not freezing a few gallons. Did not thin it nearly enough. Tree was loaded. Tied my German Shepard underneath the tree at night to keep the raccoons away!

Enjoying the firefly show this year. I can’t remember when there have been so many.

Yes…i agree… on my blueberries i basically built a frame around them and then put the net around the frame…its the only way it works…i use some 10ft conduit and some t posts… looks ugly but works fine.

Katie you are already getting cucumbers? My 6 year old planted Dragon eggs this year. I saw egg size fruits coming in today. I wasn’t going to let them get as big as yours. Is yours still tender? Maybe they can get bigger than I thought.

I just counted 56 plums on my Satsuma espalier branch!! I can’t believe it. This is the most fruit I’ve ever had. I also have 3 dapple dandy and 7 Laroda. Satsuma is a beast! Hopefully I’ll get to eat most of it.

Glad to hear it Susu!

Yes they stay tender - I have not let them get bigger than maybe palm sized but at that size they taste great. The skin Is thin and seeds are not noticeable.

Not just one typo but two! I didn’t mean 3 gallon of course…Smuckers probable doesn’t make 3 gallons at once! haha. 3 quarts would be heart breaking to mess up though and thats what I meant.

And yes, for me 4 pints would also be a pretty good size batch. I was thinking about 4 jars- meaning 4 HALF PINT jars. I often make as few as 2 half pints (now that IS a small batch!) but evht to ten 4 half pints is fairly small to most people I guess?

Like you say, we really have different approaches. WHile I’m sure we would both like our own jam/jelly the best, it would be fun to trade a jar sometime. I mean, maybe later this summer we can send each other one of our half-pints. Let me know sometime if you are in!

Well, I am happy that you cleared all of that up. I think I was having nightmares over trying to can 3 gallons of jelly.

Been wondering about how you sterilize your jars. I think that you would want your jars to be super hot as you are filling them and tightening the lids with the rings since you are just going to set them aside to seal. Don’t really know though. Seems like every time that I tried it sort of this way, about half of the jars did not seal.

I sterilize my jars in a 23 quart Presto canner using it as a waterbath by boiling for 10 minutes. After filling the jars with jelly/jam, I boil the same 10 minutes to seal.

However, I have noticed that the concord grape jelly that maybe was left over in the pot after filling jars that was not enough to put though the waterbath was different when eaten. Lets say I placed the jelly in a sampler jar and just set it aside and later placed it in the frig. Well, they always seemed to have a more desirable color and a less cooked taste than the waterbath sealed jelly…

Yeah, we can trade half pints. I’ll trade you one of my half pints of plum jam for whatever fruit jelly you have. I’m not sure of what fruit you use to can jelly/jam.

Marionberries picked this morning. Honestly, these probably have the sweetest most pleasing flavor of all our blackberries (5 varieties). Size and texture are not as good as prime ark freedom or some of the others, but the marionberry gets so sweet! Sure reminds me of picking wild blackberries in Oregon growing up. 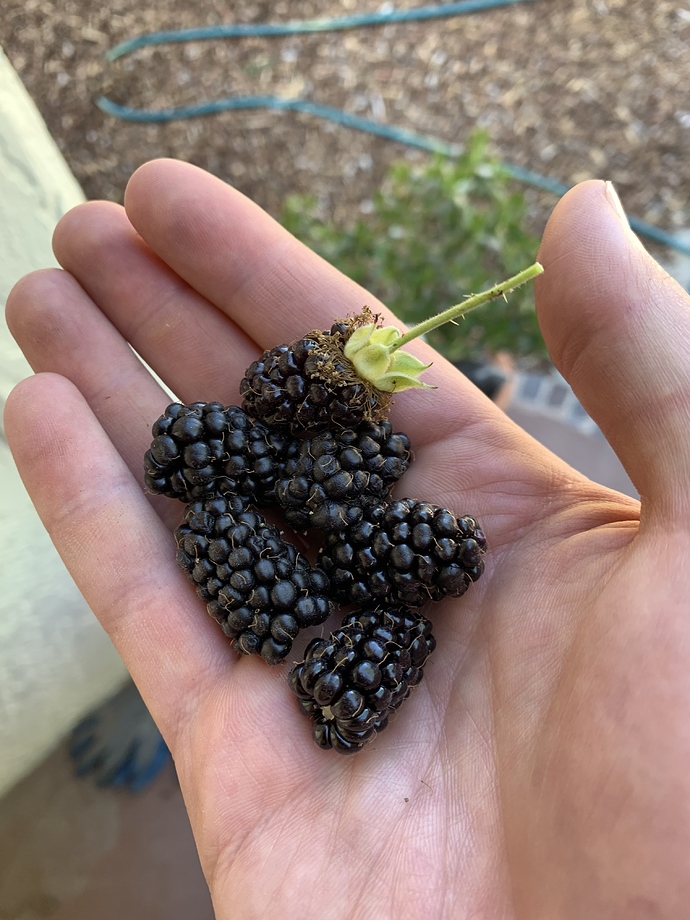 You are just way, way more careful than me! That’s a good thing, don’t get me wrong. ANd lets keep one thing in mind, the things I am describing all only apply to fruit jam and jelly, all of which involve acidic fruits and/or I add lemon juice for acidity. I’d be much more cautious and thorough if I was canning other things and would do it like you do. Any, the only thing I do to my jars is to pour boiling water into them- as they sit on the table. I let it sit a few minutes, pour it out and that is it. I try to do this immediately before pouring the hot jelly in them so they will still be warm, but I don’t always get it done and it doesn’t honestly seem to matter is the jars are cool.
I’m very perplexed by why your jars wouldn’t have sealed if you poured hot jelly in, put the lids on tight, and let them cool. I’m not exaggerating to say 99% of the time all my jars seal perfectly. IN fact, I always enjoy hearing that metal popping sound the lids make when they seal an hour or so after I pour the jam/jelly in them. I always take the jelly straight from the stove and pour it into the jars so it is piping hot, and I leave very little empty space at the top so maybe that helps??? It is interesting that you think your waterbath cooked jar jelly looks and tastes a little different than any that you don’t waterbath.

We will trade later this year-I’d really love to try yours, even though I suspect you’ll find mine too sweet for your tastes! ha. As for what I make: So far this year I have made blueberry jelly, cherry preserves, peach preserves, and blackberry jelly, and plum jelly. I will be making fig preserves later and also might try apple butter this year for first time.

I sterilize my jars in a 23 quart Presto canner using it as a waterbath by boiling for 10 minutes. After filling the jars with jelly/jam, I boil the same 10 minutes to seal.

I will use my dishwasher to wash (already clean) jars and have it in the heat cycle to keep them hot. Take them from the dishwasher one at a time to fill them. Or I just put them on the stove in a hot water (almost simmering) and remove one jar at a time to fill. I might add though that it is the sugar concentration in the jelly that prevents spoilage in the old fashion canning process (without water bath) so if you are using low sugar recipes you will probably have to go a greater distance with the sterilization/sealing process to prevent spoilage.

I might add though that it is the sugar concentration in the jelly that prevents spoilage in the old fashion canning process (without water bath) so if you are using low sugar recipes you will probably have to go a greater distance with the sterilization/sealing process to prevent spoilage.

I might add though that it is the sugar concentration in the jelly that prevents spoilage in the old fashion canning process (without water bath) so if you are using low sugar recipes you will probably have to go a greater distance with the sterilization/sealing process to prevent spoilage.

THank you so much for clearing that up!!! I honestly didn’t know why I have such good luck just pouring mine in jars, putting lids on, and letting them seal. So many other people do the waterbath and/or pressure cooker thing and I couldn’t quite understand why. We’ve already established that I probably use 4 times as much sugar as Sam so now things are making more sense. I also suspect my sugar is why I’m able to get away with not using pectin (well, store bought pectin- I know most fruit has some “built in”. DO you think that is true as far as why I get a good firm jelly without added pectin?

It sounds like you do yours similar to the way I do (ie no waterbath) is that right? I love the dishwasher idea. Believe it or not my house didn’t even have a dishwasher when I bought it, but now that I’m having everything redone after the fire I am certainly adding one, so now I’lll use it for jars. thanks

How close are your satsuma to being ripe?

I got a haircut today…was looking a little rough.

Cut down the yucca stalks. There were a lot of them, they had a good year.

I usually use pectin because it is fast and almost foolproof but I have made jams and jellies without it and just cooked it down til it sets. Most times I get it right and if I don’t I call it syrup. Some fruit isn’t foolproof with pectin (muscadines for one) and requires some extra time on the boil. I’m not exactly excited right now with my jellies because to me they taste sweet and a little fruity but not a strong enough fruit taste to be special so I’ve been tempted to try the low sugar recipes.

Canning requires creating an environment non conducive to microorganism growth and sometimes that is with acid and sometimes that is with salt and sometimes it is with sugar. When you use the sugar it creates a hyper osmotic state that keeps bacteria from growing and then you want to enhance that with the vacuum creation that prevents molds and such from taking over. I think that our parents never really saw a need for water bath because of the high sugar content used. Not only is the osmotic condition met but it also aided in higher heat that took longer to dissipate. Just think how hot that jelly syrup gets and how long it burns if you get it on you!!! That is just my opinion and not really based on hard science. I just kinda make my decision to “bathe or not to bathe”

on a gut feeling with several variables. I’m pretty much redneck/set in my ways/old fashioned—however you want to say it.

i guess I’m old school as i don’t process mine either. i also make a lot of freezer jam as i believe over cooking destroys some of the taste and the natural antioxidants in the fruit. my b. currant jam is made by just adding sugar , a squeeze of lemon then mashed with a potato masher. I’ve done them both ways and i prefer them this way over cooking. for stuff i share i cook and seal though. i sterilize my jars in the oven.

Used to be, we’d melt paraffin wax and pour a 1/4 inch of it over the jam, then store it that way - no lid. Kept fine.