This wolf river apple is in its 5th leaf here. A decent sized young tree, but until this spring had never bloomed. Well it finally ripened a dozen or so apples this year. It lived up to its reputation of being slow to bear, as well as the apples being large. These first offspring were 3+" in diam. They ripened (based upon seed color) quite a bit later than I would have thought; way later than my other “early” apples.

As far as eating quality, an odd bunch of properties. I originally selected wolf river because it was supposed to be excellent for drying and cooking (not that I now need more cooking apples). Wolf River is not a decent fresh eating apple. Not very tasty, not awful but bland and hard. I tried cooking some into sauce and it was at best OK, a lot like commercial sauce, not that much flavor. So mediocre, that I had started thinking about what varieties I was going to graft over it next spring. Then I also tried drying some into fruit leather. Wow, dried as leather it is great. Really good tart apple flavor that is just not there fresh or with just a bit of cooking.

Very unexpected results. This was just the first year of fruit, so it may change/improve in future seasons.

Anyway, thought I should report.

I have a branch of wolf river on a multi graft tree so I’m glad you mentioned this. I’m growing wolf river, wickson, and others on a tree in between 3 excellent seedlings which are intended to generate new apple seedlings. The idea is wolf river will make the new seedling apples much larger. Thanks for the tip on using the fruit. It’s been called a frost apple by many people meaning it’s best after a frost. Some of Wolf rivers attributes are briefly mentioned here http://adamapples.blogspot.com/2011/10/wolf-river-apple.html?m=1. On this site you will see many growers mention that it is a frost apple https://www.orangepippin.com/apples/wolf-river. You might like this old thread on best tasting apples Best tasting apples. A light frost is not the same as a freeze because freezes actually damage apples as stated in this article http://www.ehow.com/info_10040071_should-wait-until-freeze-before-picking-apples.html. Even frosts are not the key but rather the cooler weather around the time of the year when a light frost occurs.

Thanks for the links Clark.

I hold out hope that these might improve with age, as some of the commenters say they enjoyed eating Wolf River apples. Based upon the fruit leather results, probably will keep it around, at least for a while. For the record, there had been a couple of light frosts prior to the harvest, but we got them in before the 20F weather.

Have a buddy that lived in West Va. He said he loved these apples and how big they are. This was years ago on his grandmas property. This next year I am going to surprise him with a couple of grafted trees. Will be looking for some scion in spring… hope these are as good as he says they are.

Wolf River has a great name, impressive size and looks. Tree grows nicely with wide crotch angles. For me, the fruit texture is somewhat light and ‘puffy’…(as opposed to dense), which makes for a quick cooking apple and well suited for drying. Mildly flavored.
Around here they ripen mid season.
A good cooker but not a great overall apple, IMO.

Out of the 100+ varieties I have grafted on M111 it has some of the most vigorous growth after a couple years in the orchard. Only Bushy Grove has surpassed it. I look forward to seeing what kind of fruit it produces. Im sure I added because of Tim Hensley’s description: https://www.youtube.com/watch?v=rB7UG-_t4Vo

Tom Burford, senor apple guru, often expounds on the fact that when he was young and folks didn’t have access to all the fine sweet things now widely available specific apple varieties were grown for specific purposes- for drying, for apple butter, for sauce, for pies… now the emphasis is for fresh eating with baking being of secondary importance to most Americans.

I’d never heard that WR was noted as a great drying apple- it was touted for baking for which I found it OK if you want a soft baked apple. Nice tip, but I grafted mine over to other varieties years ago.

I would surely be interested in getting ahold of some Wolf River scion this coming spring if anyone has it available.
Thanks!

I am looking forward to maybe some apples from my WR this coming summer. In our cold zone I have 4. Three grafted onto siberian apple, one on Ranetka and one top worked onto a local crab. The last 3 winters down to -40F with no die back at all and very vigorous growth.

It looks like they have some fruiting spurs so I am hope full. In my cold zone WR would be a welcome addition to my apple orchard if it will produce. The later season ripening might be a problem, but it is rated in the same time frame as Honey Gold and I harvested my first ones of that variety this fall and they were good. I was wondering if the long daylength could be a factor in apple ripening times?

A Wolf River story. I’ve had Wolf River on my Possible Apples List for quite some time but others always won out when it came time to choose scions. It’s a common old apple around here. Seems if someone says “come and pick all you want” it’s usually WR’s! Maybe not the highest flavor but one year we had no apples to speak of and we got several bushels from a friend. And a nearby road apple had a beautiful bumper crop of similar large sized green very sour apples. We picked several bushels of those. Mixed (with added brown sugar and cinnamon) they made very good sauce! I appreciated both apples that year.

Early last winter I noticed a real nice old orchard tree in our neighborhood still full of large good looking apples, well frozen and up above deer reach. I managed to knock one down and nibbled it. It was wonderfully sweet and flavorful (as much as a frozen apple can be).This was worth checking out. I was going to wait for the next harvest to try a fresh apple but come spring I went ahead and nipped a few scions, just in case I had room for a few more grafts (I did). I kept an eye on the tree and sure enough it had another good crop. So I planned to ask the current owner for permission to harvest some - no one had been picking these old trees. When I figured it was time someone else did, too. The crop was cleaned out completely. But I managed to scrounge a couple apples anyway. Enough to determine that it was a Wolf River.

So i now have 3 local Wolf Rivers grafted - one on a full sized wild tree and 2 root grafted. They all took and grew well. The icing for me is that they not only came from our neighborhood, they are from the Wolfe homestead (on Wolf Road because when they put up new road signs a bit ago the road lost its local and proper ‘e’.). I look forward to the very local (as in my own) Wolf Rivers! 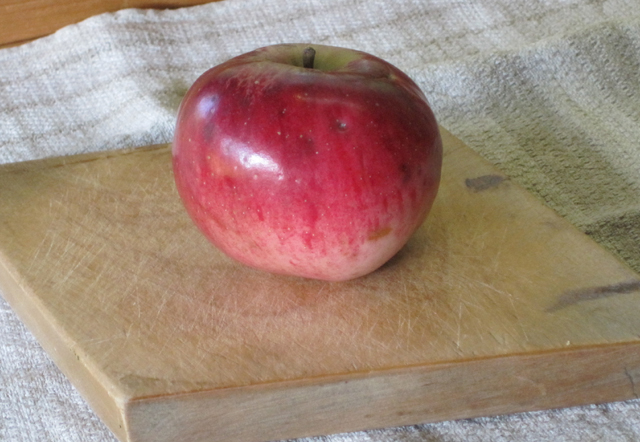 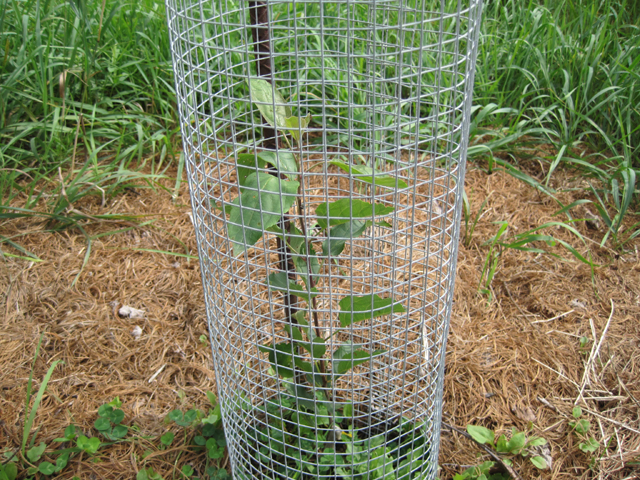 Wolf river have grown great here. Don’t think you will ever regret grafting those. They grow not just fast but mine headed for the sky straight up. Think the natural growth plays a factor in the delayed fruiting. @BobC let me know if you need scion wood and I will send you some.

Thank you. I did graft about 20 WR between myself and buddy. Last year And they are doing well. Thanks again for offer.

Yeah, here if you feel like a good, somewhat early apple to bake, WR is pretty good, but there are so many better apples for other uses, including eaten fresh- I also prefer an apple that cooks firmer in pie, but I’m sure it would be fine to blend in. As I recall they go completely soft when cooked. I grafted mine over to other varieties long ago.

Oh I don’t expect these to be main first choice apples but I’d like to have some reliable producers that will get me by on short years elsewhere. They’re outside my fenced main orchard so I’ll only get what the deer leave anyway. Sue

I’m ceetainly impressed with the sturdy growth of our grafts this year! If they keep this up they’ll be above deer range in no time. Sue

My experience on my one WR on seedling (anakov.) root stock is somewhat mixed. It has been a strong grower, probably the largest of the apple trees planted that year. However it has been a shy bearer. Since it started fruiting, maybe 1 or two decent years, with more that had no fruit or just a couple of apples.Including this last year where most of the other apples had a ton of fruit WR had maybe a dozen. Not sure why this is as it is supposed to be a fairly heavy bearer IIRC, And the trees next to it are bearing well (Mantet and Wealthy).

Probably not fair to extrapolate from a single tree, but this has been my experience.

The OP had it correct when he described the Wolf River apple taste. Not a lot of anything to rave about. It served it purpose many years ago but there are a lot better apples to choose from now. Unless you just want one to have one. Really big apples but they seem to get mealy very quickly when I had one.

Just harvested my WR"s so the critters wouldn’t get all of them. The wife made some apple crisp and a sugar free pie with just the wolf river apples so i could see what they taste like on their own. Seemed to be a very dry apple even after baking. They do have a very different texture when eating fresh off the tree. Now for size, they are something to behold. 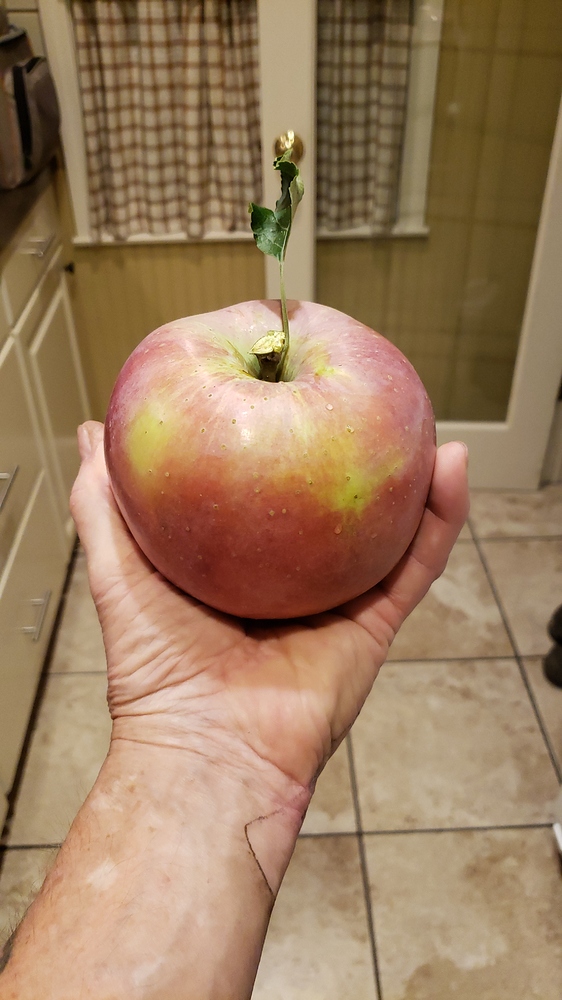 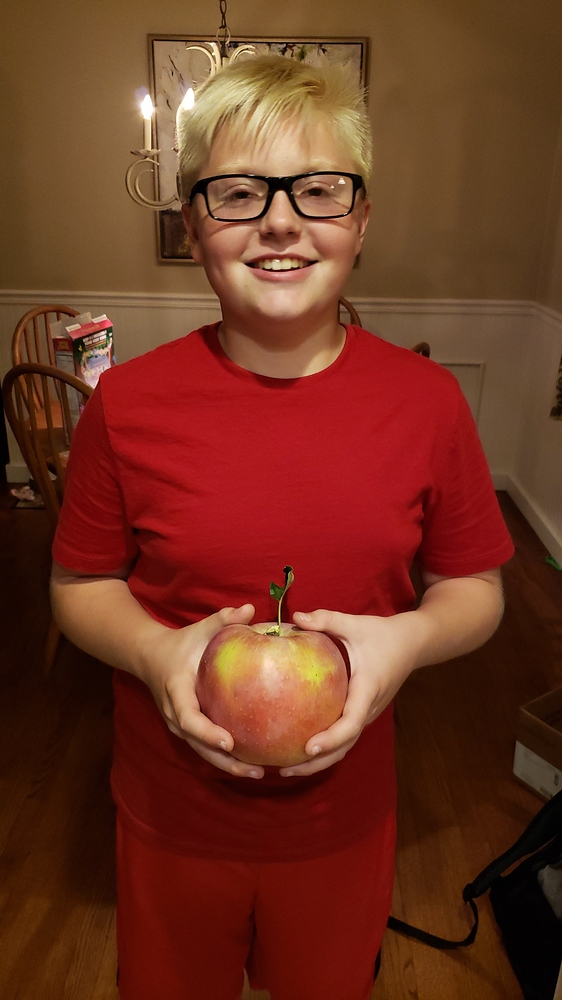 Huge apple. I had not seen any of those growing around here for many years.

We had a tree of those growing up on the farm. They were big enough you could cut around any worms, since we didn’t spray them. I never found them to be edible raw. We mostly canned them into chunky applesauce which we made into pies. I can’t say they were my favorite.