Just finished pruning the peaches. Took longer than expected - about 1/2 hour per tree (60 hours). We pushed the big branches out with the loader and skidded the small clippings on a piece of fence wire.

Happy I got this task done! Now time to spray oil and copper.

Here is a picture. 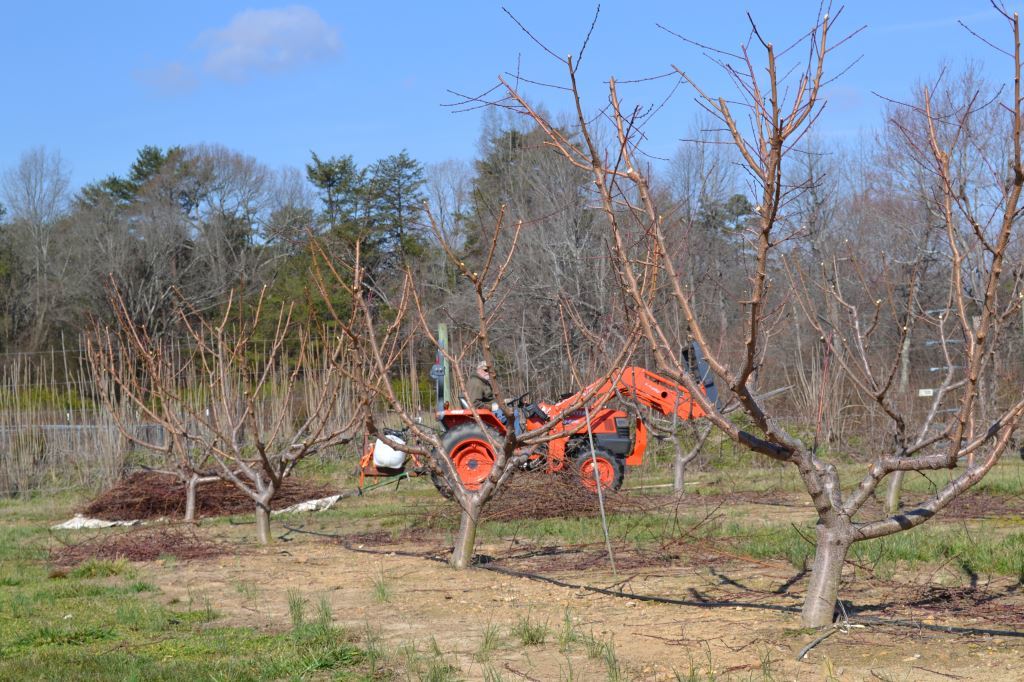 I also just finished my peach pruning, but only 40 or so trees spaced a lot closer so 5-10 minutes per tree.

Sounds like you have the pruning process figured out.

Are you busy next March?

Man you hammered those suckers. Is there any fruiting wood left? Was this more than usual pruning?

The trees look great by the way.

Plenty of fruiting wood from what I see, although the central dead zone is just starting to spread. . You have to show us a picture of the trees when they are loaded with fruit. In good peach growing conditions,part of the thinning is done by pruning.

I also get through peach trees quicker- never more than 15 minutes on a big tree like those- 85% with a lopper and the rest a hand pruner. But by the time I start pruning them I’ve been building speed with constant pruning for 2 months, and it all requires almost no thinking anymore.

With a small commercial orchard you have no way to develop a real free rhythm as you only prune for a few days in an entire year.

We won’t prune like that here because of freeze danger. I usually take off about half the fruiting wood as the first step in thinning. Maybe in the greenhouse with no freeze danger I should take that off during dormant season.

I hope with practice my speed will improve. The 30 minutes a tree (60 hours total) includes the clean up time, It took almost 10 hours just to rake the clippings and haul them off for 120 trees. Not sure how long it took to push the big limbs to the pile with the fork lift arms on the loader, but the brush pile is about as big as a tractor trailer truck. Its going to be a big fire!

Thanks for Dr Mike Parker from NCSU for his pruning guidance. His video on youtube are excellent, but his pruning demo here last year really helped me understand the basics. The new ARS pruners cut down on the fatigue and the 36 inch Hickock loppers made it easy to get to the top of the trees.

The buds are ahead of schedule, so frost could be a big issue. Hoping for about 2 bushels/tree average this year (year 4) if the weather cooperates.

Excellent looking trees! That’s a lot more work than it looks like. I’m thinking about composting my small wood. Do you burn yours that is what I have been doing?

Your pruning looks good to me. I think we are both following the same videos so we are using similar styles. I don’t think I am any faster, my trees are smaller and I didn’t clean up yet (still have a few apples to finish).

I wasn’t including brush removal time. My helper wraps it up for me in tight bundles and his speed is truly astounding. The mountains of Ecuador do not tend to produce laid back workers and even in that context he excels.

I haven’t taught him to prune peaches yet. You will find it gets more complicated as they age and aren’t quite as cooperative at producing vigorous shoots evenly through the tree. But in a commercial orchard with water during droughts and dawn to dusk sun it isn’t as much a problem.

The edges of my property have mountains of pruned wood bundled up. I’ve ignored the sanitary issues for decades and it hasn’t been an an issue (yet). Even rabbits don’t seem particularly more numerous compared to nearby land without the brush piles.

You will find it gets more complicated as they age and aren’t quite as cooperative at producing vigorous shoots evenly through the tree.

I am having this problem on my 14-year O’Henry, its not putting out a whole lot of new growth and the little new stuff is too high. Borers set it back. It is finally working its way out of its borer hole but it is hard to get the fruiting plane down on such a non-vigorous tree. Borers in general made a very big and bad impact on my peaches, lots of cascading problems arose.

Man you hammered those suckers. Is there any fruiting wood left? Was this more than usual pruning?

Had more growth this year to cut out . I hope I have enough wood left, but I’m still trying to learn how peach trees grow and how to prune them.

I went to a peach pruning demo last week where another grower had 4 year old trees which had never received any fertilizer and no irrigation. His tree caliber was almost twice as big as my 4 year trees with fertilizer and irrigation. They were planted in an area which had received chicken manure for about 30 years, but none recently. His growth was so vigorous he used a gas powered pole saw to head many of the top scaffolds at about 7 feet.

Pictures tend to be deceiving, and maybe I’m missing some shoots, but I don’t prune my trees that hard. It looks like you could throw a cow through the trees.

Like Alan I prune the vast majority w/ loppers. I don’t pick up prunings at the farm. We just throw them in the row middles and run a bushhog down through them a couple times. It chews them up pretty decently. Some people use a flail mower which really grinds the wood up.

We are showing some pink now. With this weather I expect to see some blooms in a couple days. Way, way too early for us.

It looks like you could throw a cow through the trees.

I may have cut the trees a little bit too much. I was told to prune so that I could throw a “cat” through the trees. Its a little hard to tell from the pictures but there is still a lot of small fruiting wood left. Unless we have a big freeze, I hope I will be OK.

I will probably return to mowing the clippings with the bush hog next year, since it was so much work to rake them. I would love to have a heavy duty flail mower and a big tractor to pull it with!

Just showing pink on one variety with 600 chill hours here, but everything is going to be a lot earlier than last year.

I see lots of fruit wood left in the trees that are close up. It would be nice to see how your trees bloom and the amount of peaches you get. I don’t think you will have problems with limbs breaking from the weight of the peaches. You have some nice trees.

Do you use some sort of trailer to haul your prunings off? That’s got to be a huge amount of work.

Looks like you have a great base for the start of a hugelkultur bed, especially since you grow a yearly supply of more base material.

Just another project to take up more of the time we don’t have.

Great job and good looking trees with lots of fruiting wood. The only
suggestion that I could offer would be to bring the tops down a little lower.
That will make it easier, when it comes to thinning and picking. My trees
are fixing to pop too, and it’s way too early. I got wiped out last year with a hard
freeze on Palm Sunday.

I got wiped out last year with a hardfreeze on Palm Sunday.

It looks like this year with the early spring, hard freezes might come into play here.I guess time will tell!

Looks like you have a great base for the start of a hugelkultur bed,