Hey all, I thought since lots of folks on here grow various types of berries, I thought it’d be a good idea to start a thread on your berry harvests. That would include pics, plus info on the flavors, production, age of the plants, disease pressure, and so on.

As far as we’re concerned, we have wild blackberries that are starting to plump up, and just starting to turn red. It’ll probably be another month before they’re ready.

Down the driveway close to the old house, there’s a patch of what appears to be wild purple or black raspberries. Most of them are still red, but some have turned purple. Those ones are actually kinda sweet, a bit seedy, but not too bad. Sometimes I see birds in the area, so I’m sure they’re “sampling” some.

We’ve planted new strawberry, gooseberry, blueberry, and raspberry bushes this year, so no reports on those this year, but hopefully next year we’ll be swimming in berries!

Alright, let’s hear about them berries!

Arapahoe blackberries and Bababerry raspberries are producing like crazy at the moment.

Too early for raspberry harveting in RI but the fruit is setting.

Raspberries are coming in, just a handful a day. DH has been picking blackberries for a week or so, but they are too tart for me. I don’t think they’re quite ripe, but he’s eating them so whatever.
The elderberries just passed peak bloom. They were spectacular, like huge white clouds! Looks like a good set, so here’s hoping for wine and jam later!
Alpine strawberries have been disappointing this year. Small, few, and sour. I saw a chipmunk the other day, maybe he’s getting them.

So, what does a Loganberry taste like? I’ve heard of them here and there, but was curious.

Are Dorman Red rasps more of a southern rasp? I haven’t heard of them much in these parts.

My wife loves our wild blackberries, but I think she hasnt had many domesticated varieties. I find them too tart and seedy, but I’ve never been a big fan of them in general.

Her cousin, who lives over in the next county, grows elderberries. They actually gave us some of their EB jam.

What kind of rasps do y’all have?

I meant to tell you that since you are in central KY, you ought to visit Reed Valley orchard, just outside of Paris. The have a huge apple orchard, with some pears and peach trees. We went there a few times last year, and really enjoyed it. They had some really nice apples to sample, over 50 varieties.

They also grow blueberries, which they’re just now allowing to be picked. They’re having blueberry pancakes breakfasts over the next three Saturdays. We’re thinking of visiting them one of those days soon.

They also have lots of blackberries and a few rasps. I highly recommend the place. 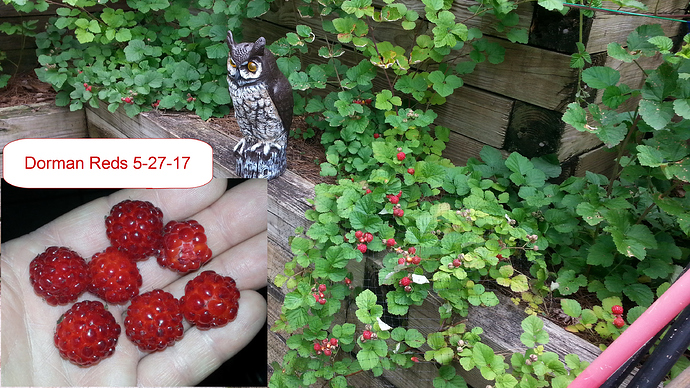 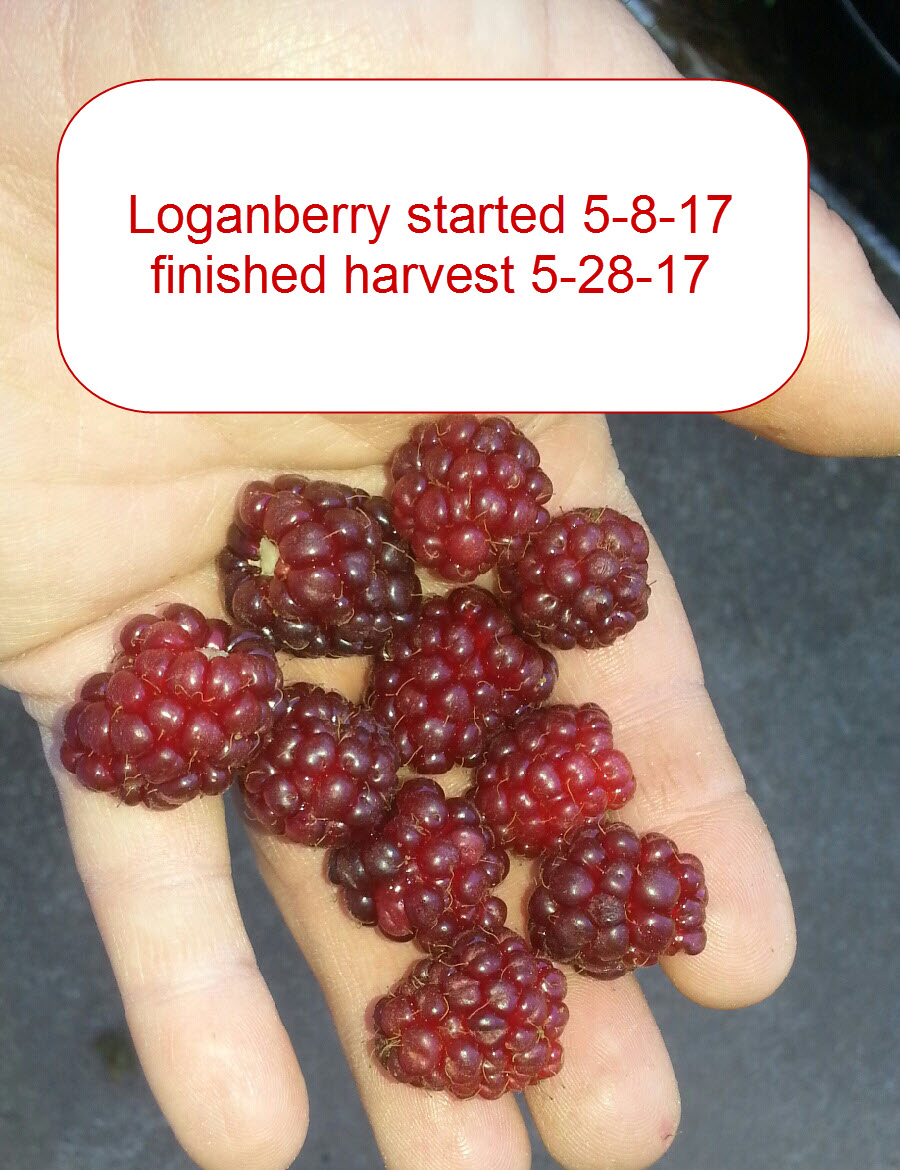 I have been there. Lots of fun. Boyd’s Orchard near Versailles is nice too, but a tongue twister to say!
My favorite is an orchard down in Nancy, KY near Somerset. Last time I was there ( 2010), apples were $6 a half bushel upick, and when I asked what kinds they had, he answered in the slow local drawl, “Honey, we got more apples than you ever heard of.”
You pick blueberries sound nice though. Growing up, my church ran a you pick blueberry farm near Nashville. I spent my summers gorging myself and picking hundreds of pounds to sell. I miss that!

Nice, thanks for sharing the pics, they look tasty. What do you do with them- jams, jellies?

Good to hear you’ve been to Reed’s. I’d go there every week, but it’s about a 90 mile one way drive from here, so a bit too far.

I looked up the orchard you were talking about in Nancy, and found it on this page:

nothing ripened here yet. most still in flower or just finishing. my earliglow strawberries and honey berries have fruit but it’ll be a few more weeks. my autumn britten and polka rasps. are about 3ft. and should start to flower soon. going to have huge harvests this year of goumi, autumn olive, elderberry, blueberries and raspberries as its the 3rd. year since i planted them. gave my 2 type rhubarb a good dose of finished compost last late fall and i can’t keep up with them this year! gave a bunch to the mailman yesterday.

Loganberry is a natural (and sometimes human) hybrid of blackberry and raspberry. The taste varies regionally. I enjoy them fresh off the vine.

I don’t have many so they go from the vine to the mouth.

Here are our blueberries. This one is New Hanover SHB. We are also picking Pink Lemonade that I posted in another topic, and Camellia and Southmoon. 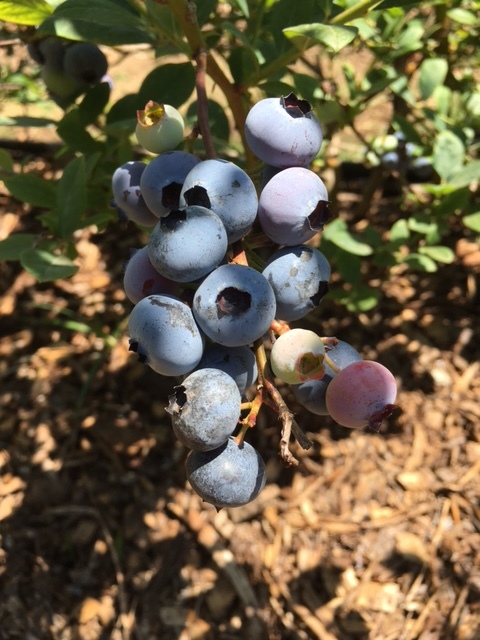 OK, I figured that most folks have harvested most of their berries for the year by now. If y’all don’t mind, I’d like to hear how your rasp, black, blue, goose and other berry plants did this year. What was your most/least productive, best/worst tasting, most/least disease resistant varieties? Also would like to know if SWD was an issue with your harvests.

I’m curious about how your rasps and blacks did, as I’d like to add some next year, and have been looking into the various varieties.

BTW, we didn’t harvest any berries from plants we planted this year, but we should get some strawbs next year. We do have some wild black and raspberry brambles that we get some fruit every year, but no domesticated ones yet.

I have two types of blackberry, PAF and an unknown variety. I had a bountiful harvest…freezer full of berries and juice, jam and jellies made, pies eaten, and friends happy!

Thanks, sounds like PAF is a good black. I may try that one next year. Can y’all grow any rasps there, or is it too hot for them?

@Drew51, @BobVance, @moose71, @jtburton, @Klondike_Mike, and any others, how did your rasps and blacks do this year?

I’ve been growing Obsidian,Newberry and Columbia Star Blackberries and Tayberries for a few years.
The Tays have been around the longest,along with Obsidian.I like these two,because they fruit early,before any SWD show up.The harvest wasn’t too big this year,with Obsidian,not putting out much new cane growth and the Tayberries were overheated during their ripening time,which turned them soft.
The other two varieties are are fairly new,but are producing more each year.
There are a few others,Triple Crown,Chester and Marionberry in somewhat shady areas that produce a little,but there isn’t the room to provide better conditions for them. Brady