Yeah that graft gap will fill up in no time. I’d be more concerned about the sharp angles in the branching above the graft. I lost a big scaffolding branch in a bad way on my Pakistan Mulberry.

Hopefully someone more experienced than me can answer my question. After initial graft takes a few of my grafts mysteriously had the leaves die on the scions only. It happened to three grafts last week (Hooples/935, Knobbed Russet/935, & KR/111). Are my scions going to hang on and push new growth next year? A scratch test shows green, but I’m pretty sure that doesn’t mean anything since the leaves just died last week. 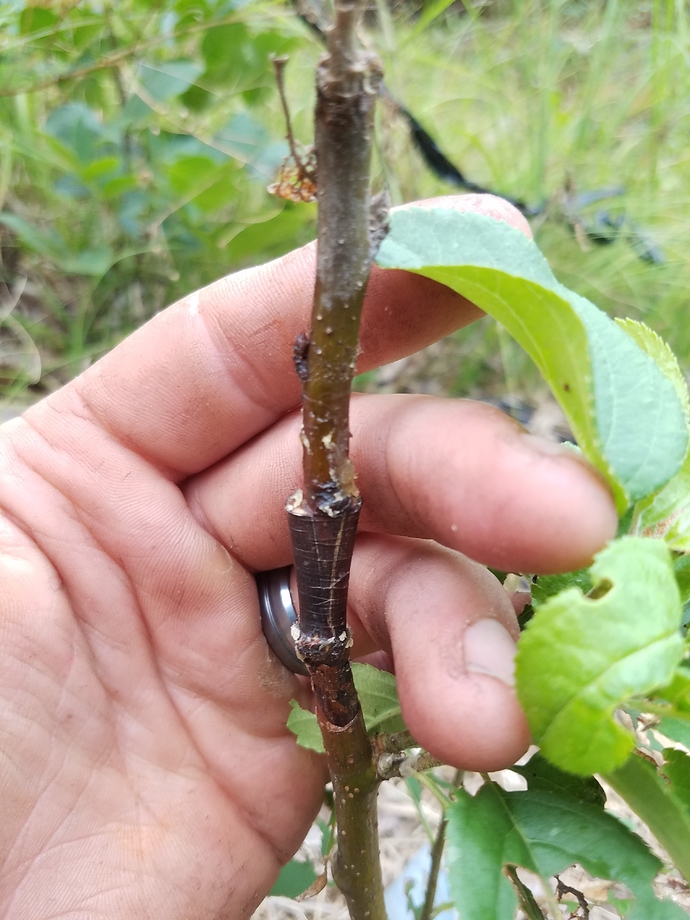 If it stays green most likely it will grow next year.

@Ahouse422
Looks as though it may have been rapped to tight , too long.
Rubber band , etc.

@Hillbillyhort do you think they were strangled? I’ve seen videos and pictures of grafts where the rootstock was almost to the point of starting to swallow the tape and they still survived, but I don’t know if that’s the exception or the rule. I’m still getting a feel for the timing of unwrapping grafts. I’ve been spooked of breaking a tenuous graft union, so I was going to wait until mid-August, but it appears that is considerably later than I should wait.

@Auburn the suspense is killing me! I don’t know if I have the self control to limit myself to one scratch test a month until dormancy. If I checked them as often as I wanted I’d probably peel every bit of bark off of them checking to see if they’re still green.

What likely happened is individual scion energy reserves allowed the scion to push growth but the working area never callused.

You should be gentle but also hold the rootstock in one hand and put the fingers of your other hand slightly above the wedge on your scion and tilt it to each side to see if it will break free. It doesn’t look (to me) like a healed/healthy union. Your carpentry is terrific, however. A+ on carpentry. Some fail and that looks unlucky.

The tape or band you used was not put on too tight. The working area is perfect.

I agree completely with @Barkslip.

So do I. That occasionally happens even with apparently well-done grafts. They sprout and appear healthy, but eventually wither because they didn’t really callus. That most recently happened to me with a Discovery graft on Golden Delicious.

A related effect that I occasionally see is that a scion will sprout and push a small amount of growth, but then pause for a couple of months, adding no new growth and looking increasingly unhealthy. It may lose some, though not all, of its new leaves. Eventually, it takes off and grows normally. It’s as though it callused very slowly, and while the initial growth was from the scion’s resources, it didn’t die when those were exhausted. It just stopped growing until the graft finally took. I had that happen with a Pipsqueak graft just this season.

@Barkslip thanks Dax. After I unwrapped it I put my finger near the top of the scion and pushed the rootstock several inches in both directions. The union didn’t budge at all, so it seems pretty solid. I should have mentioned these were grafted in late March, stored in a root cellar until Mid-April, and then planted out. Growth was visible by the beginning of May. Can a scion have enough energy reserved to hold leaves until late July? The KR were decent scions but the Hooples in question was practically a toothpick.

@Ahouse422
I said it looks like it may have been wrapped to tight ,
Because of the horizontal lines in the bark under the wrapping and the aparent bulge at the bottom.
I have had this happen with some brands of rubber bands that amazingly last all summer in the sun with out degrading,
Most rubbers will start to breakdown in the sun after 3- 4 weeks in the sun , which is usually sufficient time for things to Calus up good .
Parafilm alone does not girdle. Some rubbers, and tapes will.
What was it wrapped with ?

It was wrapped with plain old rubber bands (I was being a cheapskate and experimenting). I covered the rubber bands with a fairly tight wrap of electric tape to prevent them from deteriorating prior to callus formation.

I tell ya the union tissue on both rootstock and scion looks like dead (black) tissue.

Under the working area I looked at last time I visited this thread and it appears at least on the side we see on the photo that the bark is missing on the rootstock. One last thing I would do to put this to bed is to using your knife, nick an area on the sliver of the scion (that you cut for the rootstock) & nick on the sides of the sliver on the the rootstock to see if it is green under.

And then look at the rootstock below the carpentry area all the way around. I mean what I see could be dead tissue or long ago callused tissues. Tough to say on a photo. 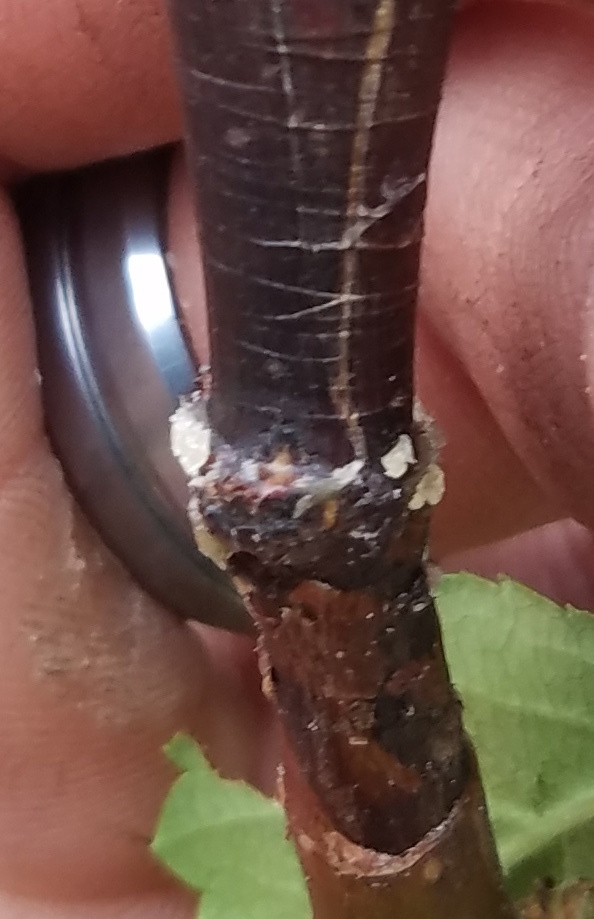 Maybe the whole rootstock is dead and that was the problem all along. Sure doesn’t look good does it.

Lastly, now I’ve seen plenty of grafts that are black when the rubber or tape is removed. I want to be clear so others don’t follow on an assumption. And while the wiggle test to see if the scion will break free does not always work, it’s still glued in but no callusing ever occurred. Grafts do some strange things and sometimes until you really get the guts say after next Spring if it never re-grew to snap the scion free… you’ll not know until you put enough pressure to wiggle/snap it free to learn it was ‘glued in there’ as grafter say about grafts that never took but also didn’t easily fall apart when tape/rubber was removed.

No, definitely not. Jerry however describes situations that are occurring or do occur, really well.

There are so-many maybes involved during grafting and maybe it will grow next Spring and sit doing nothing until then.

Glad I checked in on this thread because it’s answering some of my questions. I Frankenpeared the half of my pear tree that the former owner let a Callery branch below the union grow out on. I’m pretty pleased, 15 out of 17 grafts took. Due to late snow storms and freezes and time constraints(aka my wife…Ha!) my grafting occurred late May to mid June. The union and scions were first wrapped in parafilm, and the union was then tightly wrapped with green plant tie tape. I have been leaving it on as long as possible to ensure the union isn’t broken by birds or wind or what have you. I have seen wraps, ties, and such on branches in the past with pretty major bulging that didn’t strangulate the branches. I am certainly watching carefully for bulging bark and haven’t seen any yet. How long can I let it stay? My earliest graft has a couple feet of growth, which leads me to the next question that was commented on above. Do I need to support every union with a splint? And then, how long do you leave the splint…until fall, spring, or it just depends?

It just depends but yes you want to support every graft mainly for birds to have a place to land. A lot of the time the limb you cut off can serve as the stake.

I have a raised bed I grew a lot of grafts in and transplanted them a year later. In that bed I put up several stakes so birds would have a place to land.

Most grafts also need to be tied to a stake to keep them growing straight as well.

I find stakes a necessity for most of the grafting I do whether in the field or bench grafting. A lot of the stakes I use are from native grey/silky dogwood shrubs growing on my property that produce straight as an arrow stems.

I forget to remove the electrical tape covered the rubber bands in a few of my persimmon grafts and they girdle badly at the graft unions and the wind snapped off the grafts with eased. Another lesson learned even after 15 years of grafting experience.

After 67 I’m down to 20 something, dang deer destroyed my nursing need outside my fence. The deer ate all my red flesh apple grafts pendragon, pink pearl, Thornberry, and almata before my honey crisp and unknown grafts. They didn’t even eat my honey crisp grafts at all. All grafts that weren’t ate and delayed, grew about 2 or more feet so far, my pengrandon on m7 is up to 5 ft 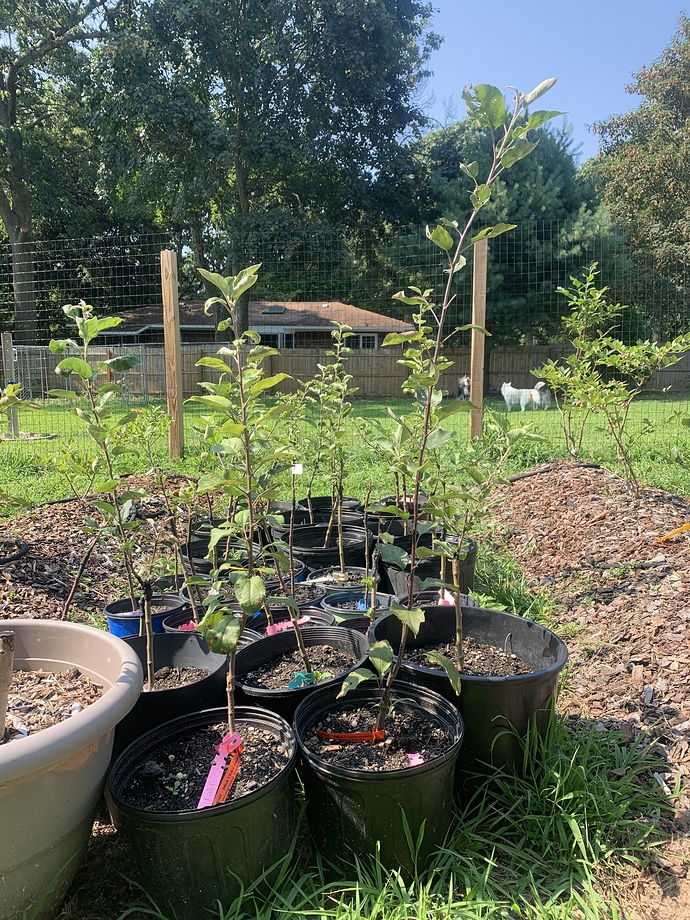 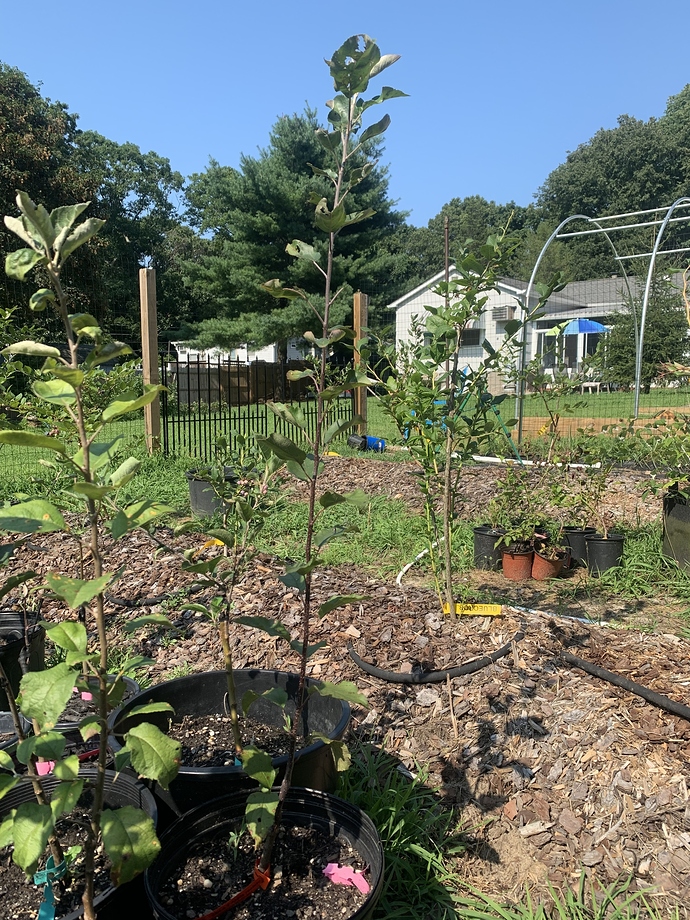 So far, only my Antonovka that I intend to let bear rather than graft it over, have the deer eaten, and it’s growing again. Just multiple trunks now, which I’ll have to clip in winter.

We are not that far from each other so I will give you my opinion. It finally turned hot and dry here and when we get cool air from up north it is dry air. I lost some grafts that I knew took a few years ago in conditions like this because I removed the black tape, too early. I left it on until winter last year and had better results, I think if it is not strangling the graft I would leave everything alone. I had a pear that grew a ton and I was afraid the tape was choking it so I removed it but taped it right back up with fresh black tape.