Well, you called it. I got rough with one of the grafts and it popped out. The rootstock was dead underneath the graft, despite having live tissue with healthy green leaves just 1.5" down from the graft union. The scion was still green an inch up from the base. All of my failed grafts on Bud 9 had dead tissue underneath the graft as well that caused them to fail, despite initial takes. Any idea what is causing my rootstocks to die right below the graft?

Was your winter amazingly cold last year? I found a lot of grafts with exactly how you’re describing the dead areas under the buds & unions.

Did the rootstocks arrive with a lengthy, healthy root-system?

Next, what do you use for media have you checked for rot? You need to put your nose right on the roots after you’ve shaken most all media off and get a grand whiff.

Was the rootstock a carrot root when it arrived and thus it never grabbed into the media to be supportive enough to carry the scion?

If yes to the first question did you have certain cultivars in multiples (successes) where all the scions of a particular cultivar died? That would be do to freezing temperatures not usual for your area.

How long were they in ground? I like to let them grow a full year before grafting

They were all benchgrafts, so this is their first year in the ground.

Our lows last year were just under zero, but that was a while before my rootstocks and scions arrived. The 935 was from Maple Valley and had great roots. The 111 from Maple Valley had practically no roots. I know I got a bad stick of scion wood from MV, because out of three grafts none of them ever showed any signs of life. One of the sticks I got from them was moldy, but surprisingly it’s still 2 for 2 on grafts. The Hooples I got from them was tiny. The 111 I got from Cummins had good roots. The Bud 9 I got from Raintree really varied from pretty good roots to one “hair” on a carrot. One of my grafts on Bud 9 took only to have the rootstock die from the base up. So, even with rootstock from three different sources, the same problem with dying back just below the graft union is happening, with some happening sooner rather than later. Some were stored in a friend’s root cellar until mid-April while the B-9s were planted straight out as benchgrafts in early May when they arrived. Some were planted in their permanent home while some went into containers in my nursery row. The ones in containers got a mix of local soil and a little compost. So far my game plan on the 50 or so rootstocks I plan to order next winter is to plant them out and wait to graft until they are pushing, as well as using parafilm on the scions.

The ones in containers got a mix of local soil and a little compost.

This is where you need to be careful. Potting soil is for pots and garden soil is for gardens. Garden soil and compost both are too heavy a medium that holds too much water. I’ve done all I can.

I typically use garden soil if I have it available, and mix in some other things…such as vermiculite, pine fines, sand…or real soil mixed with cheap soil from big box store.
This year I may have had one or two things die because of wet feet in containers—but with record or near record rainfall for going on 18 months consecutively now, I can’t really say
there’s a problem. (I do avoid sticky clay, or mix in lots of amendments. Sandy loam topsoil isn’t a problem straight, but I prefer to lighten it somewhat.)

I am able to get out of watering for the most part. Many of my containerized trees have only been watered by nature in the past year.

Don’t mean to disagree when you say “you need to be careful”, Barkslip.
But I’ve got a lot more experience with containerized plants
than I do grafting. I would lose more plants for sure if I used ‘potting soil’ or ‘topsoil’ straight from a plastic bag.

Right on man. Like I said, I’ve done/said all I can.

I’ve worked as a nurseryman and as my own grower for more than 20-years and there are container mixes for trees that are quite different from herbaceous plants.

For the guy that needs to fill a few dozen Treepots at a time, Pro-mix multi-purpose from big box stores is the best you’re going to find w/o going to @BlueBerry soil mixing location or another, ha!

When it comes to bagged container media, I love my Kellogg’s. It’s not too expensive, but it’s really nice stuff. My nursery trees love it and it holds just the right amount of water.

Back in college I had my own business selling and delivering horse compost. My biggest customer was a local nursery that made his own potting mix. I know he used my compost, which was mulchy, plus vermiculite and I think some soil as well.

Found some pear scion in the refrigerator the beginning of July. Threw them out but took one and grafted it about July 7th. Today I noticed it growing. 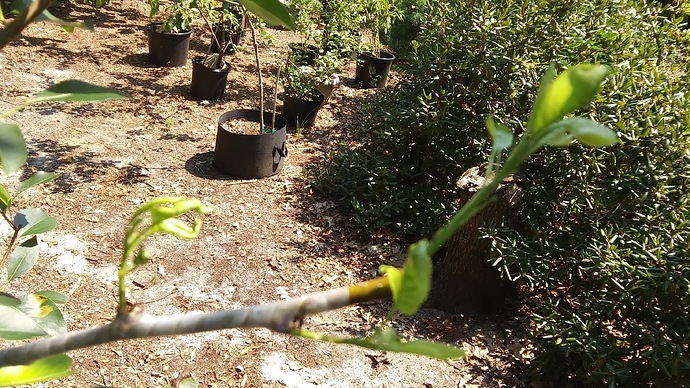 I did 20+ apple tree grafts this spring, all took and grew… Until a few died a month or two later. Perhaps I just didn’t do a good enough job on those, or birds or wind or something broke the graft union. Anyway, I had kept scions/pieces in the fridge just in case. One thing led to another and it was July 20 before I finally got around to giving them a try. Figured what the heck… I limb-grafted them onto established trees and looks like all have leaved out and are growing. Hopefully they’ll mature enough to make it through the winter. W&T, wrapped with parafilm, entire scion and over the union coated with a liberal coat of wax. 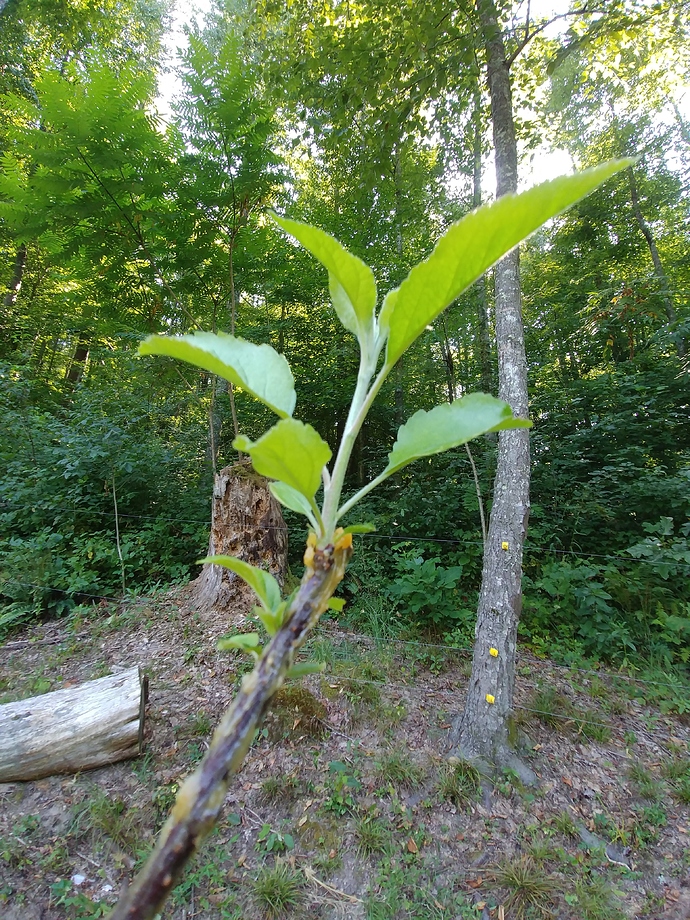 This was the first year I had much success grafting. I lost track of what one scion was, and I think I ended up putting an apple on a pear tree. It took, and the leaves do look like apple, too. Will it survive and produce apples on a pear tree?

I accidentally grafted an apple on a pear 4 years ago. It grew well and fruited. It seemed the fruit had a hard time sizing up. I was able to get apples from this graft two years in a row.

I did not like the taste of this apple and the graft grew too vigorously. This spring, I removed the graft.

The Pink Parfait scion I got from @joleneakamama is doing great…I think. The healing seems on par and the branching is excellent. Grafted this spring on Emla 7 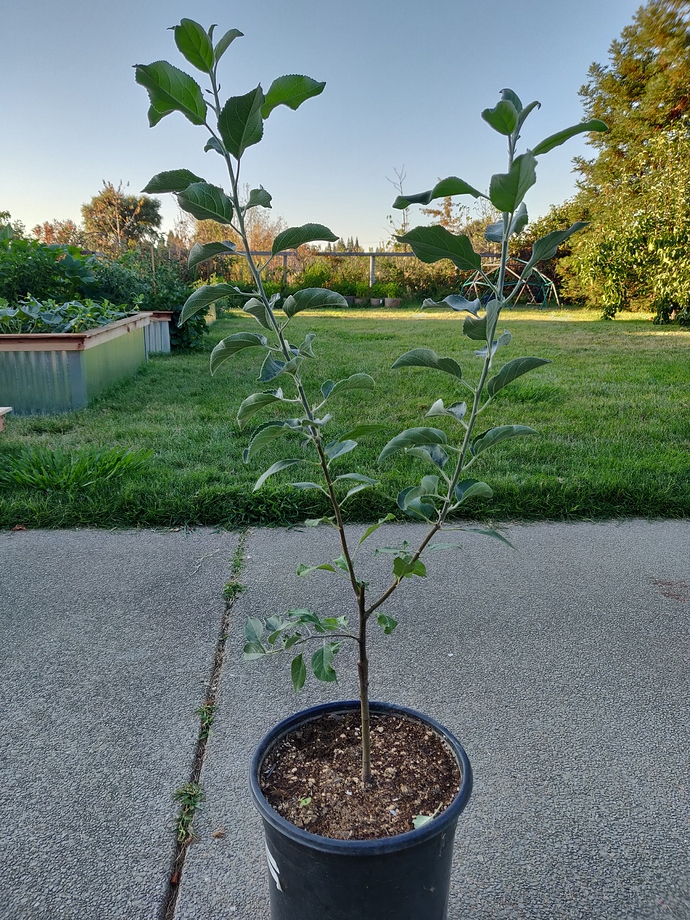 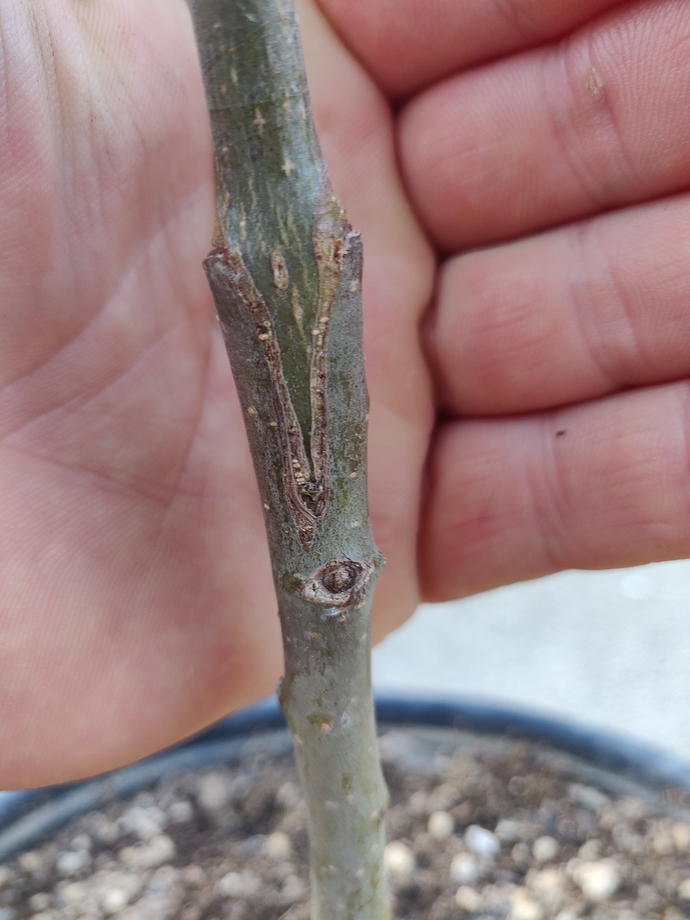 Congratulations. That can be a very fine apple, at least when grown in the West. It’s scab-prone, so be prepared to spray for that. It’s also extremely late; I don’t pick mine until December. They’re something to look forward to.

Yours looks far more vigorous than mine. But I admit I need to upsize the pot or plant mine in the ground. Jolena’s sent me some nice scions too. I think I put it on G30 and B-9.

I grafted 4 apple varieties (2 red fleshed, RI Greening and Dolgo). I lost 3 grafts but had at least 1 of each make it.

One of the Dolgo grafts has grown, but hasn’t increased in size - it only has 4 leaves.

Yep, alive and then not

I did some beautiful grafting, however.