Has anyone ever gotten an Alma to ripen in Z5-7?

I’m z7b and my Alma have been fruiting for about a week now. It gave me it’s first fig it’s third year and has gotten more productive over the last five years since. It’s about 6 feet wide and 4 ft high and I counted over 200 figs on it. I protected it with hay the first couple years but don’t anymore. It gets occasional dieback on tips. Nice carmel taste when fully ripe but size and taste don’t make it stand out. I think it is a pretty tough fig but not an early ripener so that’s tough in colder zones. It always continues trying to ripen new figs into the fall but those never get fully sweet here. It sounds like you’ve been patient with it, hope you’ll get a full crop soon.

@BobVance
My Reservoir is in pot. The first one ripened yesterday. Like you said it is a good eating fig. The fact that it is very productive is a very trait.

So far, the fruit is rather small. They don’t swell up like most of my other figs,

This year has been very crazy. Super hot now in CA. But on the east coast, we feel the summer is about over…

It sounds like you’ve been patient with it, hope you’ll get a full crop soon.

Your words were prophetic. I took a closer look today and it turns out that the figs weren’t on the Celeste in the middle after all. They were actually on one of the Alma (just not he branches all the way on the end).

I’ve been trying to figure out why one fruited and the other didn’t (until the tiny ones now) and I may have figured it out. I have a vague recollection of walking by and pinching some early in the summer (or at least meaning to do it…not really sure). I don’t think I did both- maybe I was leaving a control group. Regrettably, I never noted down what I did, so I’m not sure. But, I’ll be sure to pinch both next year and see if that was it.

I’m kind of glad that at least one of them has some fruit on it, as I was starting to consider replacing them, as it has been so long.

So far, the fruit is rather small. They don’t swell up like most of my other figs,

Last year they (Reservoir figs) got to be decent sized, but that was from an in-ground plant. Even so, I’m sure I had some other varieties (potted ones) with bigger fruit.

Aside from just the potted ones (of which I have several), I also have a 2nd in-ground one with some fruit on it, at a different property. I should find a spot at my house to put one in as well.

From last year (to gauge size): 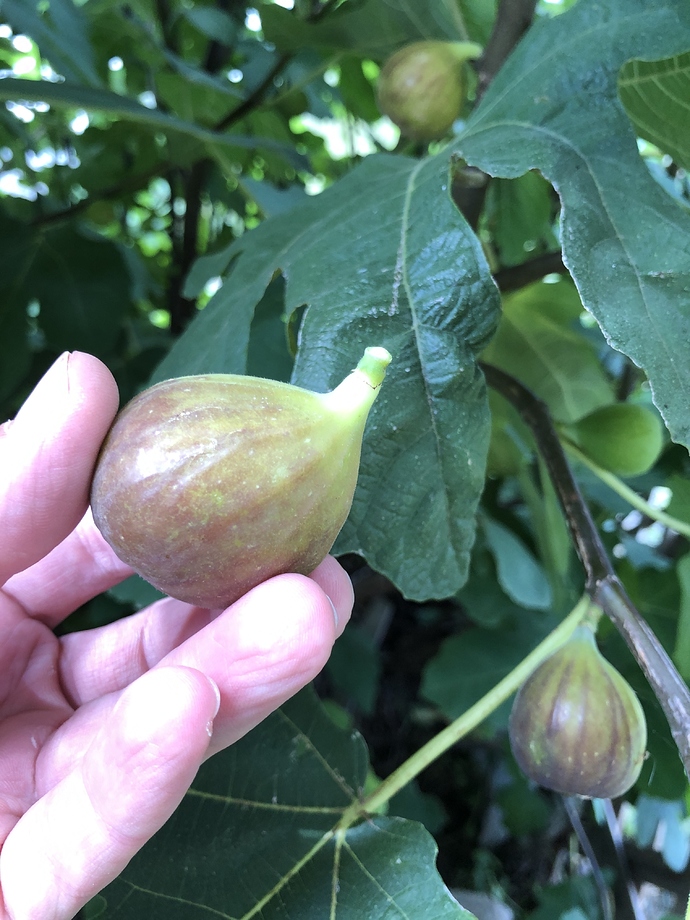 That looked to be a good size, Bob. My is in a 3 gal pot for a while. That could have restricted its’s growth. The skin is also chewy compared to several other potted figs I have.

My in ground Hardy Chicago probably won’t ripen until some time in Sept.

All these Hardy Chicago keep rolling in! Must have picked at least 60 today. Many did not make it inside 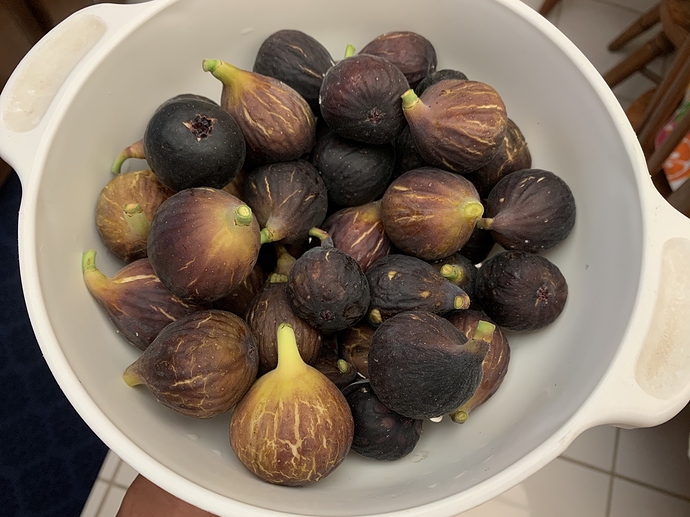 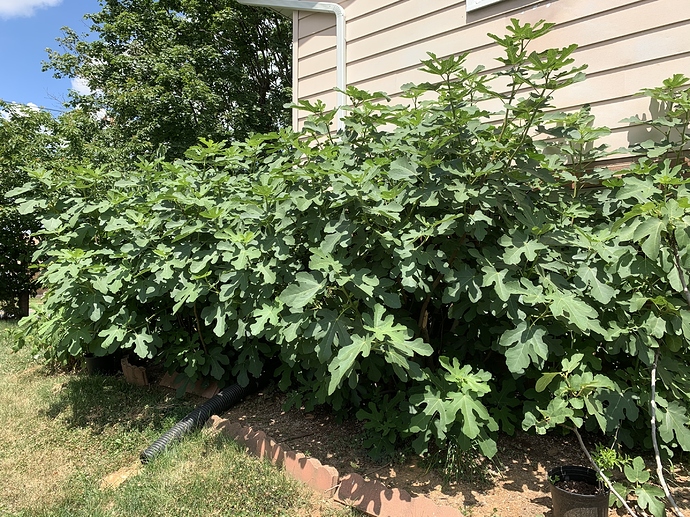 I have Hardy Chicago, Celeste, Olympian and LSU Purple in ground. It’s their first year (except for HC, 2nd year). Last winter HC died all the way to the ground. Maybe because it’s still young.

I am thinking to add a Violette de Bordeaux. Does anyone have it? Can it do well (survive winters) in ground in zone 7? Is it more cold hardy than HC?

I wanted to try it out because Ross recommended it.
https://youtu.be/2bXbPMUO9-0

Many did not make it inside

I’ve seen you say this before, Andrew. Next year I will expect something different

But they are delicious every year and too hard to resist!

Do you winter protect them? What is the spacing between trees?

I have some local unknowns in-ground and they are spaced about 8-9’ apart. They are still young.

Yeah I protect them by covering in tarps for the winter. Some are isolated bushes, and some are maybe 7-8 feet apart. They will grow as wide as you let them.

Yes, I just do not know if 8-9’ spacing is enough? Or there is no ending to allow the trees to grow.

8’ row spacing is a hedge if you use winter protection. Would be a thicket if planted on 8’ centers. 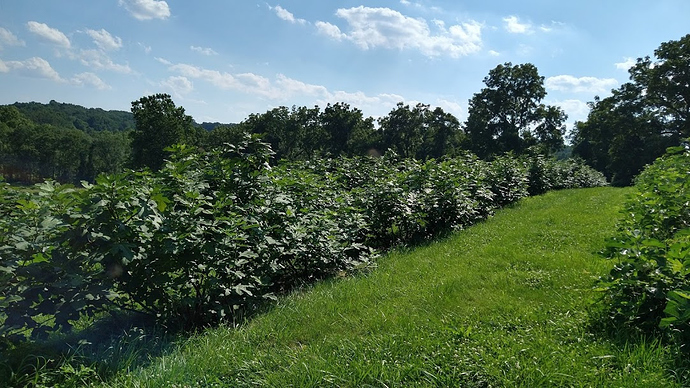 I planted mine 3ft apart and will keep them as bushes. It actually works better for me this way. Easy to maintain.

I may plant HC in a different location and train it as a tree. 8ft from other trees.

The video below talks about the high density planting.

Violette de Bordeaux from my reading is not nearly as winter hardy as Hardy Chicago, the other Mt Etnas, Ronde de Bordeaux. A friend grows VdB here in 7B in ground but in a textbook perfect situation on the south side of a barn. Without such an ideal spot I would not plant VdB in ground in 7A unless you plan heroic winterizing protection.

So I’ve been thinking about it. All the trouble I imagine it would be to essentially dwarf trees with pruning, and then what I’d do about it.

I think it will be a cool project, you will learn a lot from it, and if your luck is anything like mine you will want to get rid of most of the plants you trial because they don’t fruit well after heavy pruning, split like crazy, or don’t taste good to you. And then you won’t have to do so much summer pruning. Good luck!

I do not know how you say high density planting is easy to maintain.

Ross produced that video, but he did not show the results from his HD planting. Also he wants to cut the trees to just a few inches above ground. That is possible. But a lot of the trees will be hard pressed to fruit during the same season.

I think with a good hardy early variety, good location, we just need to wrap the tree for the first a couple of years. When the tree gets established, we could just get away with a light wrapping or no wrapping.

Thanks for the input!
I still want to give VdB a try in the ground if it’s not too costly. It’s OK if it fails. At least I know. Wish me good luck!
I will probably do what others do here - cut it down to 6 inch during the winter. Then mulch over it.