zendog, get Akers West Virginia, Tastiheart, and Druzba and give them a trial. They should be right down your alley. The only yellow/orange I can think of that you might like are Nebraska Wedding, Dr. Wyche, and Jaune Flammée. KBX might work, but it tends to the tangy creamy flavor profile which you seem to dislike.

You probably don’t recall the summer of 1980

I was in OK at the time, was 15, so I vaguely remember it being very hot for a long time. The summer of 2011 in north Texas was brutal, too. We had 68 straight days over 100, it was awful. We were on watering restrictions for a long time that summer.

But, I’ve only been up here for 6 years, and it’s been the hottest, driest summer since we moved here. It rarely has reached 95, but this month alone we’ve had at least 5 days above that, including today.

I just got in from watering the tomatoes, gave them all a good soaking, but watered them at the base, so as not to get the leaves wet. We also watered everything else- the beans, peppers, taters, corn, cushaw, pumpkins, cabbage, cukes, even the raspberries. The tomatoes and beans were a bit parched, but for the most part are doing okay. We get heavy dew at night, so they get some moisture overnight.

Hope get some rain soon, dragging 250ft of hose around ain’t fun.

Thanks for the suggestions. I’ve grown Druzba a few times and always enjoyed it. It will probably go back in the rotation next year, but I left it out this year to try Boxcar Willy instead. Unfortunately the seeds I got for Boxcar seem wrong since the tomatoes are only sizing up to about 2’ in diameter. I’m growing Linda’s Faux, which I think is a potato leaf version of Akers and I’ve been looking forward to trying it. I’ve got quite a few hearts going this year. I’ll put Tastiheart on the list for one to lookout for next year.

it’s been the hottest, driest summer since we moved here. It rarely has reached 95, but this month alone we’ve had at least 5 days above that, including today.

I’m in ‘East Kentucky’ (!) - Virginia.
And we have had similar weather. A really rainy spring. Now - a hot dry summer. Yesterday it finally rained.
YEA! I’m sick of dragging and linking hoses.

Tomato Pin Worms.
First time for everything. They are really making a mess out of many of my tomatoes.
What can I use to control them? I googled them to find out what they were - and what to use . . . and didn’t get a good answer.

Sounds like you are having problems with fruit worms, hornworms, and pin worms. I use dipel to keep them under control. If things get bad, I spray with Pyganic. Look up Abamectin which is a product specific for pin worms.

Past 10 days mostly in 90’s…hottest I have seen all summer is 94 on a bank display sign. (I’ve seen private thermometers in sunny locations or near hot concrete get close to 100.) But that’s not how you are supposed to get the readings. (I once broke a thermometer at 140 on a 102 degree day by laying it down on the ground in the sun…40 years ago.)

95 around 2pm today, but looks like a storm line is moving thru, so I really hope we get some rain. I put up more stakes on my tomatoes this weekend, as they were getting unruly, and too many branches near the ground. Wind’s blowing but no water yet. It’s been thundering for an hour but nothing else. These pop up storms have beem just missing us to the south, it’s getting a bit frustrating. Thought I’d never complain about the lack of rain around here, but this summer’s been the exception.

This year our Black Krim was fantastic, nice and meaty with a great flavor. I also grew them a couple of years ago, but we were less than overwhelmed by the flavor and non-productivity of the plant. Not sure why this year is different, but I did put up some shade cloth to help them through the hottest part of the day.
The Early Girl has also been very good and very very prolific. I’ll be doing both again! 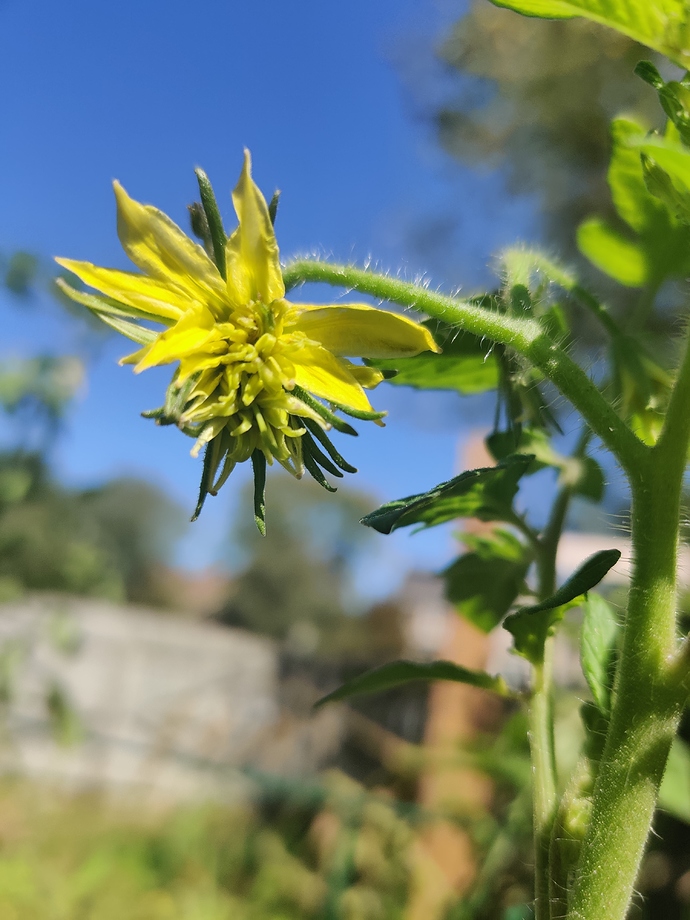 You have multiple flowers fused into one and the result is one very large tomato, albeit deformed and possible catface.

That flower type is common on a few varieties such as Reisetomate. Yours looks like a beefsteak flower that came from a severely stressed plant.

There is also a gene called “marigold” that has a similar effect.