Technically . . . Tomatoes ARE considered a fruit. But, I’ll put this question in General Gardening as a ‘veggie’ topic. I apologize if this is a ‘repeat’, but I did a search - and I don’t think anyone has started a -

’What Tomatoes Are You Growing for Summer 2020’ thread.
And - how will you support them?

I am interested in trying a new support method. I have invested in Texas Tomato Cages twice. I like the height that I can create, by stacking them. And they are sturdy. If cared for - they last a long time. (I have some that are 8 years old.)
I use them for cucumbers and to support eggplant, too. I use them a lot, actually! But don’t want to buy any more of them. 'Love them . . . but they are pricey.

Any good homemade techniques that anyone can recommend?

I use the 8’ x 50" livestock panels. Tomatoes, beans and cukes are happy to climb them. I save the tomato cages for peppers.

IMO best tomato cages are made from rebar mesh - the type used for concrete pours. The tomatoes I grew in them last three years required minimal maintenance: removing the lower branches touching the ground and pushing escaping branches back into the cage.

The cages are 6’ high so there’s plenty of vertical room before the tomatoes start spilling over the top. The openings are 6" so its very easy to pick even the largest tomatoes. You can buy a 100’ roll of it for around $90 from Home Depot, each cage ends up around $5 if i recall correctly.

The only downside is the mesh is completely rusted - it literally comes this way. But the rust is mostly cosmetic and after a month in the sun it sets up and doesn’t come off if you rub against it. I don’t think the rust effects the durability too much.

I will second the suggestion to use concrete re wire cages. I have cages that are definitely still in usable condition after 10 years. Mine are about 5’ tall and 2 1/2 ‘ wide, give or take. There is little or no maintenance of the plants after I plant them.

How big are your cages, i.e., what diameter do you make them? And, how easily can you roll or bend them to your final shape. @esoteric_agriculture, same questions, please.

I’ll try to link to one of my YouTube videos I made last year on tomatoes which shows a lot of my cages.
I find the cages pretty easy to make, but I have made at least a hundred. I use them to protect fruit trees as well as support vining vegetables. A helper is good to have, but if not, I use 2 cinder blocks to keep the loose end of the wire from jumping up. I use bolt cutters to cut the wire, and I make the cuts in such a way that I’m left with wire tabs sticking out that I bend around to fasten the cage together. As the wire comes in tight rolls, it naturally wants to make a cylinder, you have to exert effort only to keep it straight or flat. It forms a cylinder by itself.
Mine are 5’tall and 2-3 feet wide.

The only size mesh I see in my local HD/Lowes is 5’X150’. That won’t work I think. Another option is cattle panel but that costs $30 per cage plus the bolt cutter

That’s a good video - I watched it through. I’m glad you shared it.

I probably won’t end up trying them but I do like the concept. Nice job. And I have to say I loved your editing whenever you catch an error!

I am going with a bunch of relatively new varieties this year:

I grew Red Torch last year and had great success with it. Huge quantities of very high quality fruit and essentially zero splitting even in a year when I had lots of splitting on some other varieties. 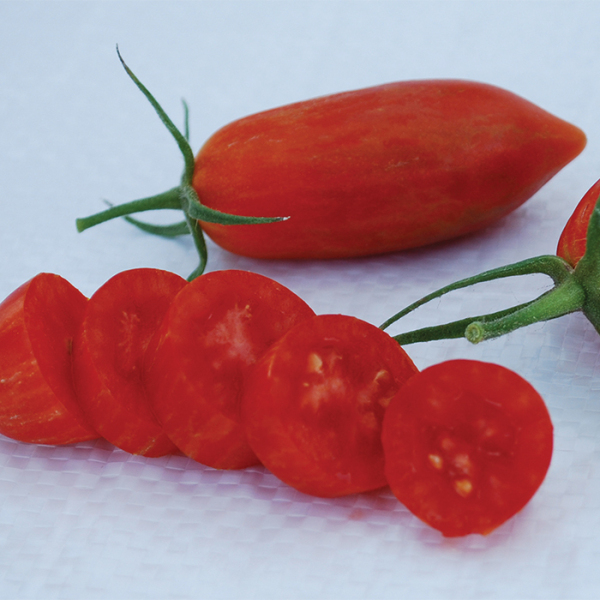 If you like sweet tomatoes, you'll love this newcomer with a Brix of 10 - highest in the trail. Pointed grape-shaped, 1 by 3 fruit has subtle gold striping and deep red flesh. Chances are this one gets picked and eaten in the garden before it can...

This one is new to me.

Hybrid. Grow some of the first cherry tomatoes in the neighborhood! Plant begins bearing early and continues on through the...

Little needs to be said.

I use Texas Tomato Cages. They are impressively huge and heavy duty. Expensive if you plan to plant more than a few tomatoes.

I use old tobacco stakes, usually about 4ft tall. I tie branches to them, and they usually work okay, but I have some varieties that tower over them, so I just let the branches droop.

I started tomatoes on April 1 indoors in a 36 cell planter indoors. It took a long time for some to sprout, but now there are 33 cells with at least one sprout. I think it’s bad soil mix.

Some have gotten too big, so I plan on putting those in cups shortly. It’s been too cool and wet to plant out en masse. But, yesterday my wife did plant out three orange KY beefsteak plants she picked up at a local store.

Last night I sowed some more in a different mix, some were those that didn’t come up, plus some seeds I had just got in the mail. Also, replanted some peppers and some brassicas and herbs.

Here are the toms we have going, and sowed-

I string my tomatoes up. Here’s a video explaining the general principle. I personally use two ten foot T-posts with laundry line linking them. The string is tied on then hangs down, and you twirl the plant around the string as it continuously grows up. This supports the plant entirely. Pinch out side shoots (in the tomatoes “arm pits” is how I think of it) and pinch off lower leaves to avoid blight. I have not tried this with cukes as he describes but for tomatoes it works like a charm.

For constructing the cages it helps to have two people, but cinder blocks work as well - just be real careful so it doesn’t spring back on you. If you buy the 100’ roll like I did, the cages are pre shaped for you when you cut them off the roll. For cutting I would recommend an angle grinder with a cutting wheel, using bolt cutters leaves razor sharp points. Finally, I just ziptie the ends together and then do my final shaping on the ground - the cages are pretty light.

@bleedingdirt my bad, 5’ is the correct height. The 150’ roll goes a lot faster than you think. I made 4 cages and a few melon / cucumbers trellises and used up almost half the roll. Sold the rest on Craigslist for a slight discount- it went pretty quick. If you go the bolt cutter route, definitely hit the cut ends with a file to dull them.

I just planted my tomatoes, this is what it looks like: 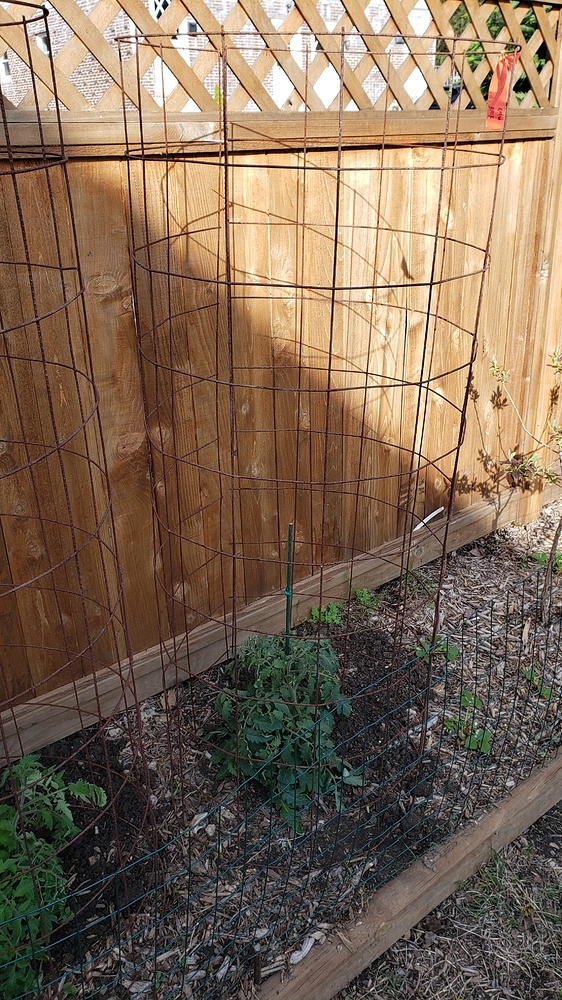 Used the 8 ft cattle panels the last few years. The work Ok but I’ve had problems later in the season getting the tomatoes to climb the panel and not punch off branches as they grow. A few years I used that green plastic garden tape to assist the panels. I’m going to try the concrete remesh tubes this season

As for varieties. I like the medium sized tomato’s.

18 Rutgers and 18 Celebrity. Bought them the last few years and I have no problem getting buckets worth to work

I’ve always used a combination of tomato cages and 6 foot cedar stakes. The cage works well while the plant is small and getting established. Once the cage is out grown the stakes take over. I’ll admit this method isn’t flawless in long growing seasons with indeterminate varieties, but it gets the job done.

This is the first time I have seriously tried growing tomatoes. I bought some of those big heavy-duty cages and have planted Cherokee Purple, Early Girl, and Chocolate Sprinkles (a cherry tomato).

That’s what I used to do but it evolved over time. Now that I’m starting over, I don’t wanna make the same mistake again.

I use the concrete reinforcement wire in 150 foot rolls like many up above. Not sure on the diameter of the cages I make, but around 6 to 12 inches wider than a five gallon bucket. These cages will last a long time. The most important thing when I put my plugs in the ground is to put 5 gallon buckets with the bottoms cut out around each plant. These buckets stay around the plant until I pull the plant in early winter. I sink these buckets in the ground an inch or two. I then put the cage around the bucket a while later, usually as late as I can without hurting the plant. This bottomless bucket protects against all wind and even some hail until they get taller than the bucket. The wind protection in Kansas or anywhere that gets terrible wind is a game changer. I can also slip a trash bag over the bucket if we have a late frost to save the plants. I also use 3 gallon buckets or #10 cans with the bottoms cut out for my pepper plants.

I’ve considered going with the cattle panel route as well but the expense gave me pause considering the amount I’d need. If I were to upgrade my method though, that would be the way I’d go.

I use left over fencing material that I fenced in my garden with. I have tried making large round cages, but the spacing between wire is a little small for me to easily fit my hands through. People with smaller hands it’s a little easier, but overall I have found that unless it’s very easy to tie up vines, things become easily too crowded.

For me, it ended up WAY easier to just put another line of fence inside my garden, and grow flat on a fence. I feel tomatoes are also a little more productive, but it could just be that it’s easier for me to prune and pick off horn worms etc this way. Also very easy to harvest.