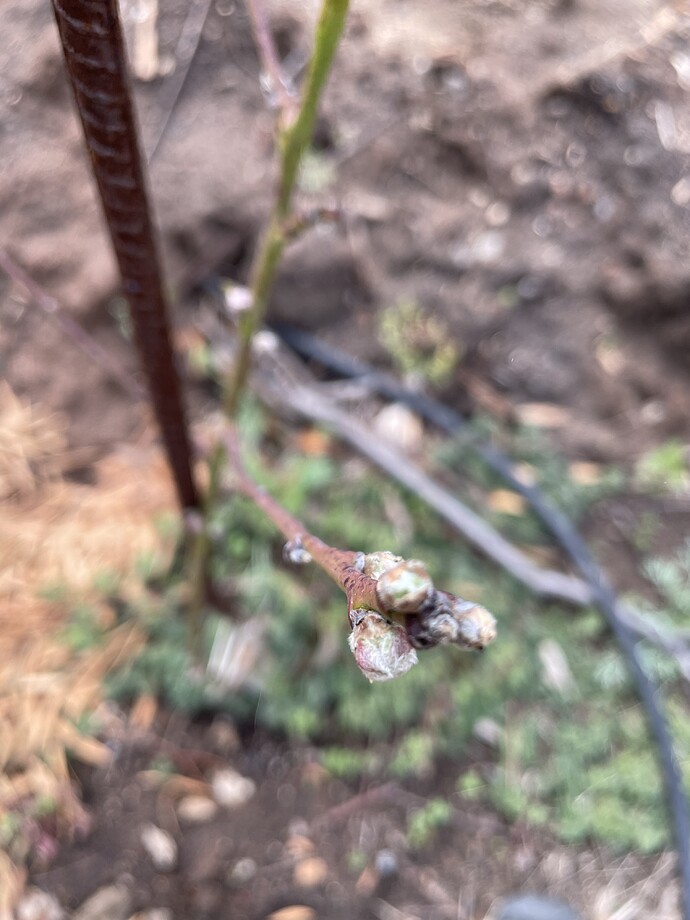 This is the Cal Red peach. I had a very small graft last year and it actually fruited. I thought that might be a fluke or something, but here come the flowers, mid season for us in inland Southern California. I think this cultivar is lower chill than people realize.

This is the peacot peach. It is amazing. It is basically done flowering right now. I have a trap for oriental fruit moth since I don’t have much luck with peaches after mid July. OFM eats them all. This cultivar is known for being low chill and so far it seems to be working in my yard. 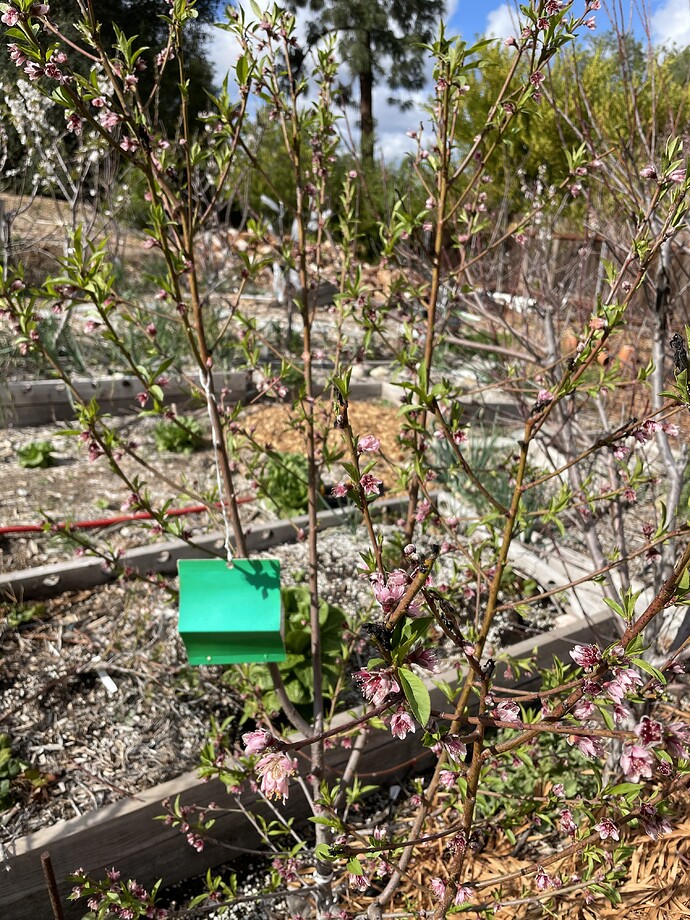 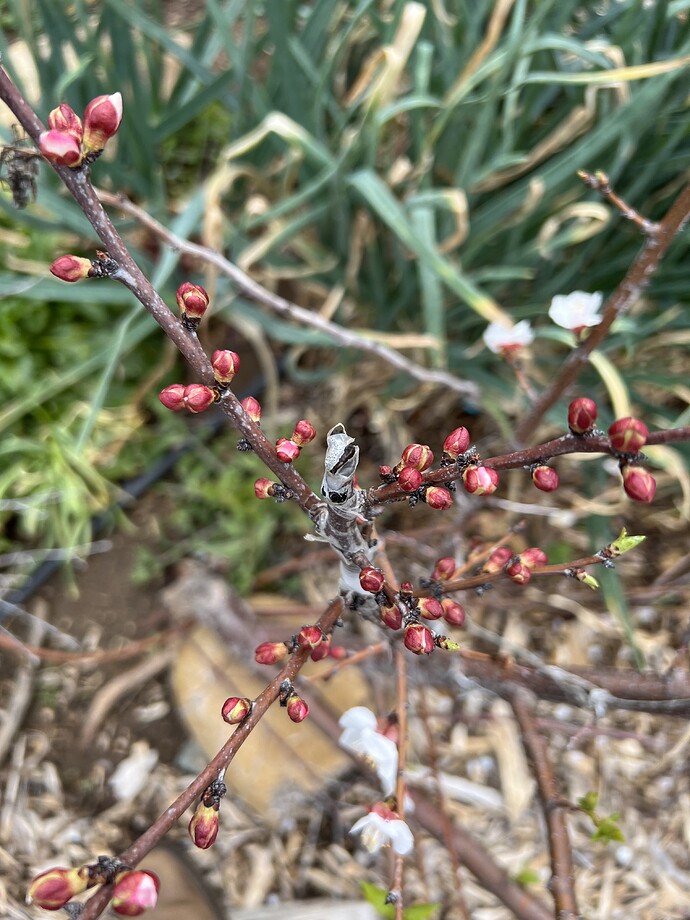 This is Nicole apricot. In mid February it looks completely dead and the buds look like they dried up and died four months ago. You are wondering why you even bothered grafting it. And then 10 days later it starts to sort of look alive. And then 10 days after that it is exploding in blossoms. assuming good pollination, in mid to late May it will be loaded with fruit.

As far as I can tell, it is the best May apricot for Southern California. I am inland so I don’t know how it will perform coastal. But inland, it has never missed a crop, despite its reliance on pollination, and despite pretty erratic chill patterns.

Fairtime peach is in full bloom. This is a moderate chill variety. It flowers very late some years, at least on a test graft. It seemed to fruit pretty well though. Last year I planted a full tree in morning shade. It has a compact bloom mid-March this year. I think this cultivar is marginal chill and will work in inland So Cal on a good year, with good microclimate conditions. 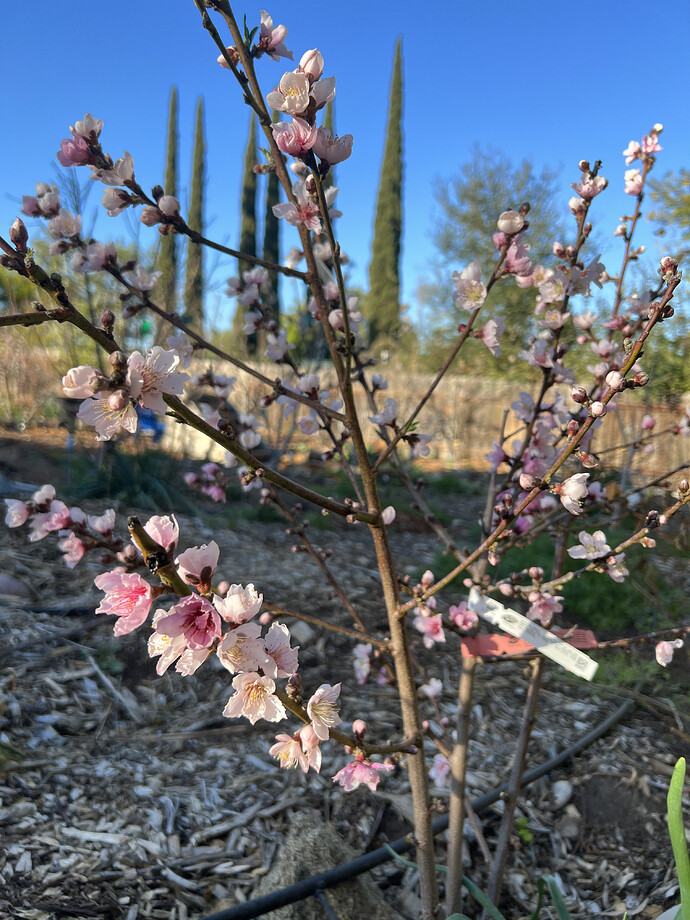 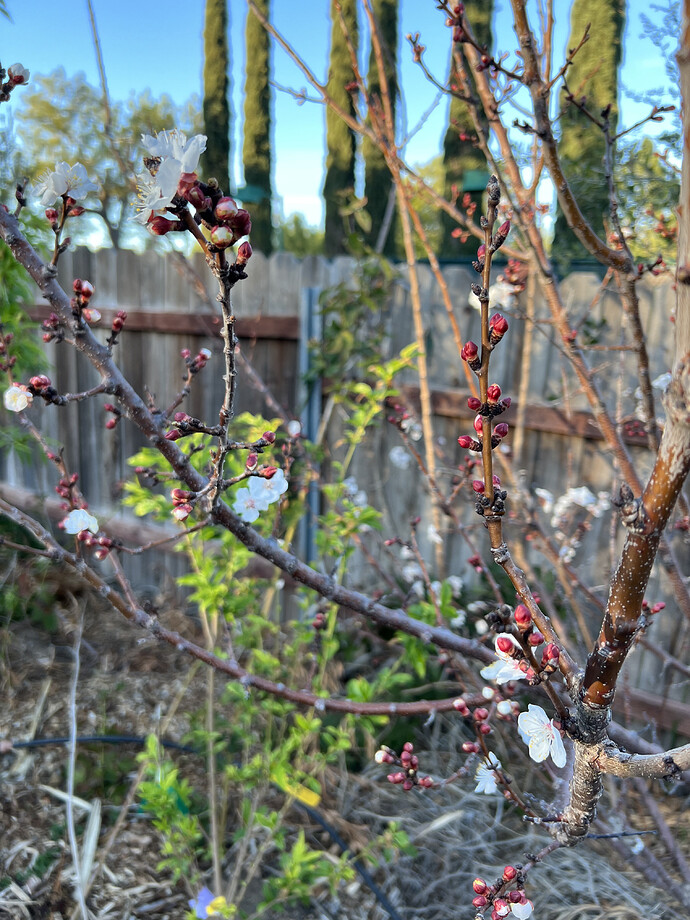 This is Hemskirke apricot from Arboreumco. A century ago there were reports that it was lower chill than Moorpark. I have found the flavor similar (slight edge to Moorpark but maybe that is related to other factors). It has fruited about the same (a few dozen fruit per medium size tree). This year Hemskirke flowered unformly and earlier than Moorpark. This is the coldest area of my yard where the cold air collects against a fence. It also gets full sun all day so that may also make it bloom earlier. We had fewer 85 degree winter days this year (one week only) so it was a good year for this tree. Maybe I will get a full crop this year?

I should do a version of this for Bay Area (specifically South Bay). Do you have Kaweah peach? I’m curious how it does for you. DWN website says late-midseason bloom but it still looks dormant of all other peaches here (even worse than Baby Crawford). DWN website also says that this peach turned out to be low chill in their latest trials. For context, Snow Beauty (supposed to be high chill) grafts have blooms at popcorn stage on the same tree.

Kaweah is fully asleep! I read the same thing as you and was hopeful. Peaches can bloom late here and still fruit.

Baby crawford bloomed 3 weeks ago at my parents house in bay area. As did liz late nectarine.

It’s possible I live in a lower chill microclimate near the Alum Rock mountains. Some of those areas around me are zone 10A. I need to track the temperatures more closely next year. The ones that bloomed for me this year (which I thought were high chill) are Samarkand Gold, Honey Diva, Muir Beauty, Parfum de Septembré, Snow Beauty, September Honey, Valley Sweet and Moorpark. It’s possible Baby Crawford is not precocious as it’s a second year graft, but I doubt it. It shows classic signs of not enough chill.

Yeah, and my parents have a whole tree. The bloom was actually inconsistent but it did start early and it was good enough. I bet if you had a whole tree, parts of it would’ve bloomed.

Does parfume de septembre fruit for you?

You are right, a large tree with several branches would make a difference. Even in my graft, some blooms showed pink a few days back. PdS is a one year graft and has blooms on it. I need to see if they fruit. I’ve hand pollinated them with blooms from flowering purple plum tree in my neighborhood. I also saw blooms pushing on Reine de Mirabelle. Curious to see how these will turn up

I’m zone 10a, coastal. I currently have blooming:

None of my apples have broken dormancy yet. My Warren pear is just starting to break dormancy. The other 3 pears (California, Bartlett, Seckel) are still dormant.

I planted the above three low-chill cherries two years ago. I’m hoping to get a decent crop of cherries this year. Last year they produced just enough to give me a taste. I also have Lapins and Craig’s Crimson. Lapins bloomed last year, but later than the three low-chill cherries. Craig’s Crimson didn’t bloom at all and leafed out extremely late last year. This year I cut off the top and cleft grafted it with Royal Crimson scions. The jury is still out on Lapins. I’ll give it another year.

My spice zee nectaplum and santa rosa plum put out a ton of blossoms this year. Fingers crossed as I was too busy to do a lot of hand pollinating. I did see a good number of bees working the flowers so I’m hopeful for a decent crop. The Spice Zee is grafted onto a Snow Queen nectarine, which has barely woken up and has only put out a couple of green shoots. Funny how one half of the tree is awake while the other is just stirring.

This is Liz Late nectarine in full bloom yesterday. Behind it is June Pride, dormant. These are in partial morning shade. When I push chill limits on them, they do better in morning shade, or just avoiding winter heat in general. Peach and nectarine are known to be heat-responsive for waking and I suspect they hate getting too much heat in January and February. 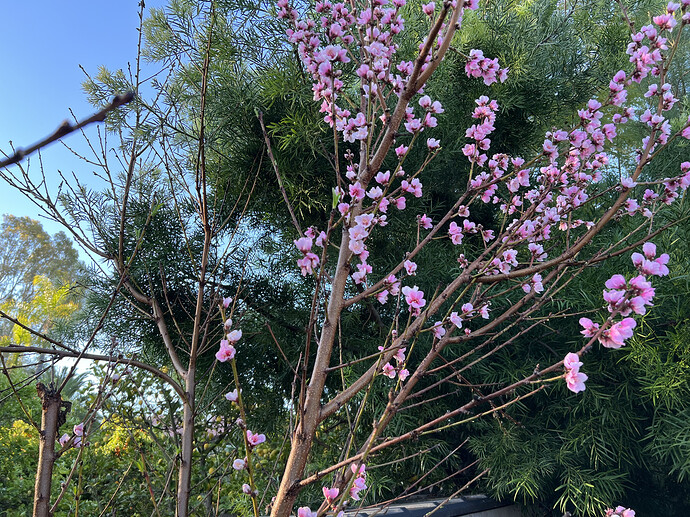 This is Kaweah, which @californicus asked about. This was yesterday and it is really popping out more today. I like to see lots of buds at similar stages. Behind it you can see Octoberfest peach in compact bloom. It is low chill despite ripening late. 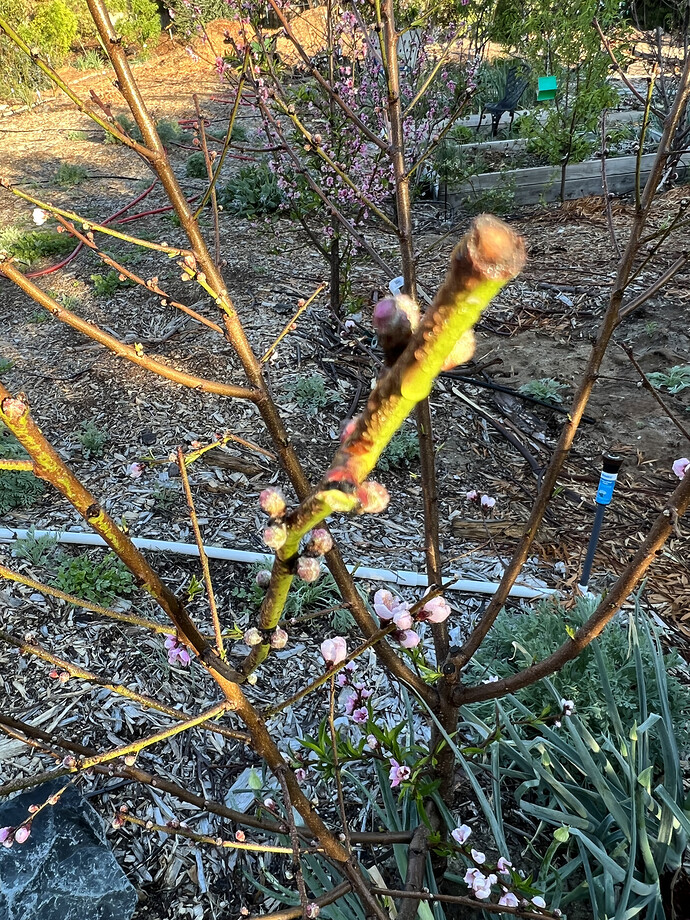 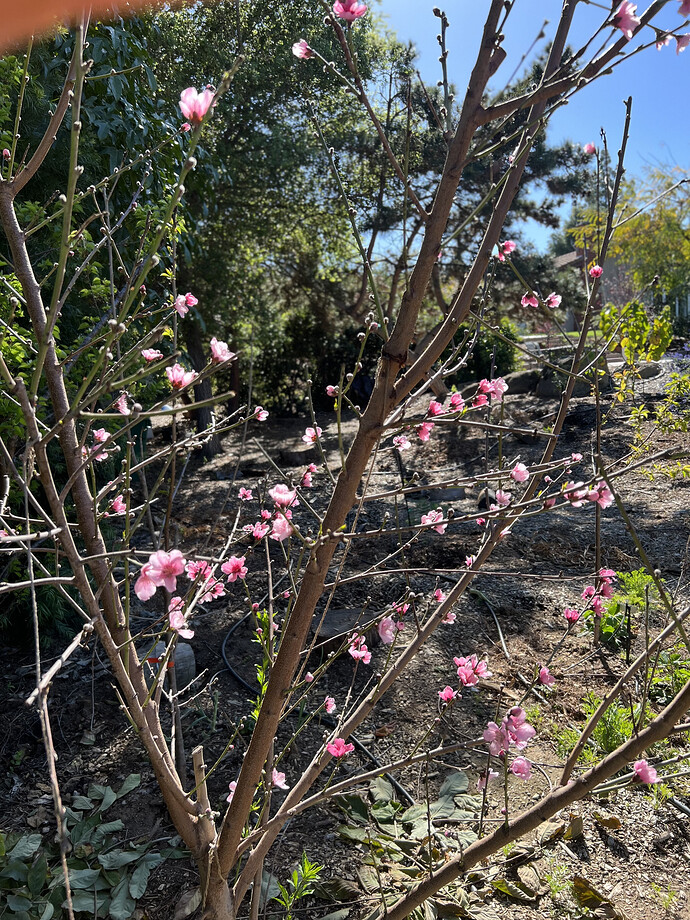 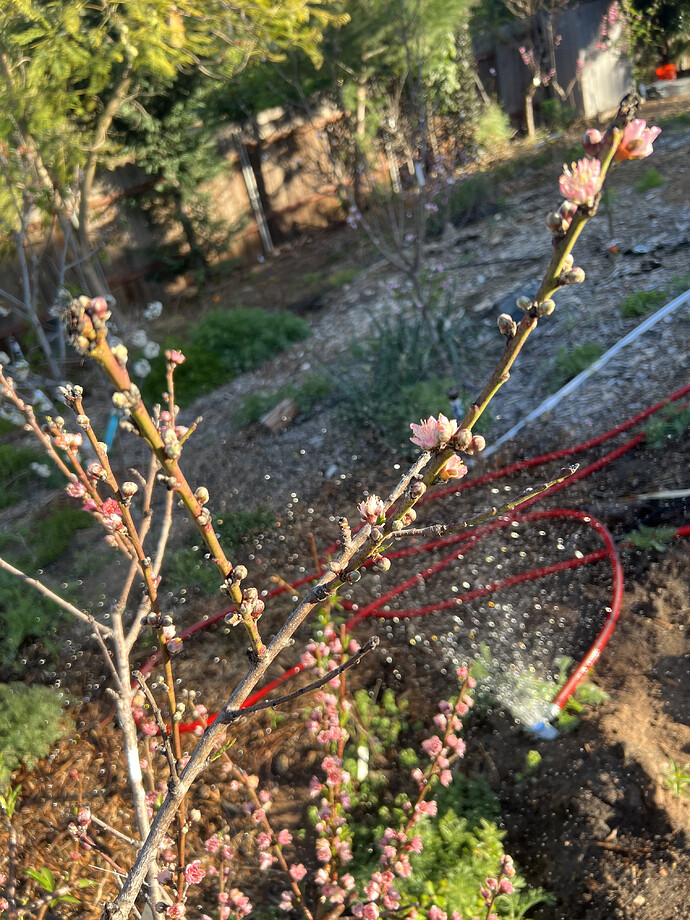 First time Sparks Mammoth bloomed early in the season. This graft is on Moorpark. Normally Sparks does not meet its chill requirements in my yard. 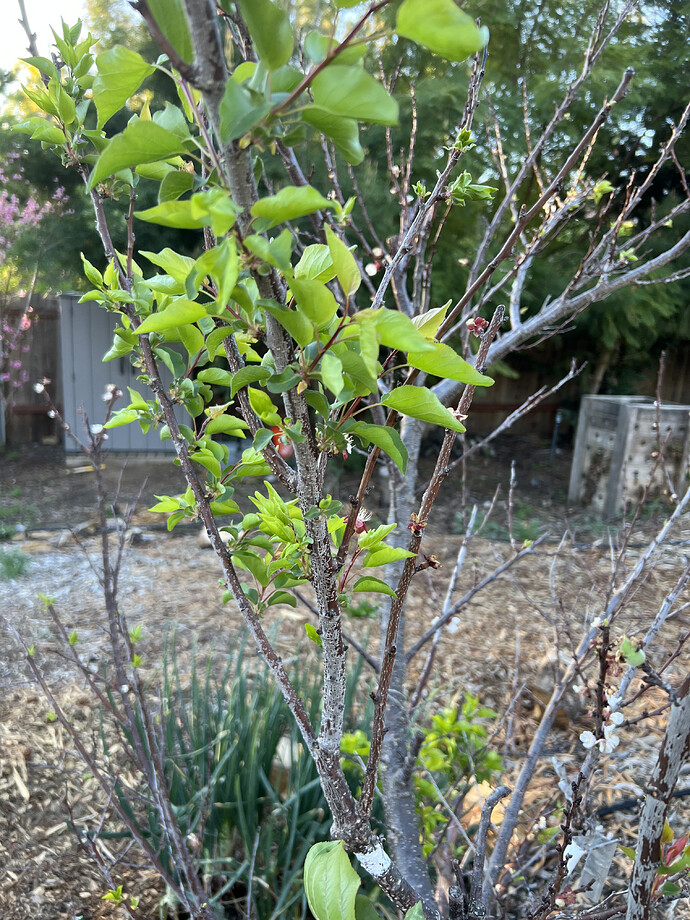 I grafted Nicole apricot x3 on my Blenheim tree. All three are leafing out right now. I searched high and low for a Nicole tree, but could not find one anywhere so I ordered scions instead.

My blueberries are still alive. Snow chaser seems to be most productive this year. I was hoping for more production from southmoon because it bloomed very well this year, but no fruits for some odd reason.

Nice! Save a seedling and graft Nicole to it next year. I agree it is impossible to find for how great it is as a backyard fruit.

Hemskirke set a full crop so far. Outperformed Moorpark and Steindorf Blenheim. Is Hemskirke just lower chill? But the Hemskirke tree was healthier than the other two. Maybe it is just that. 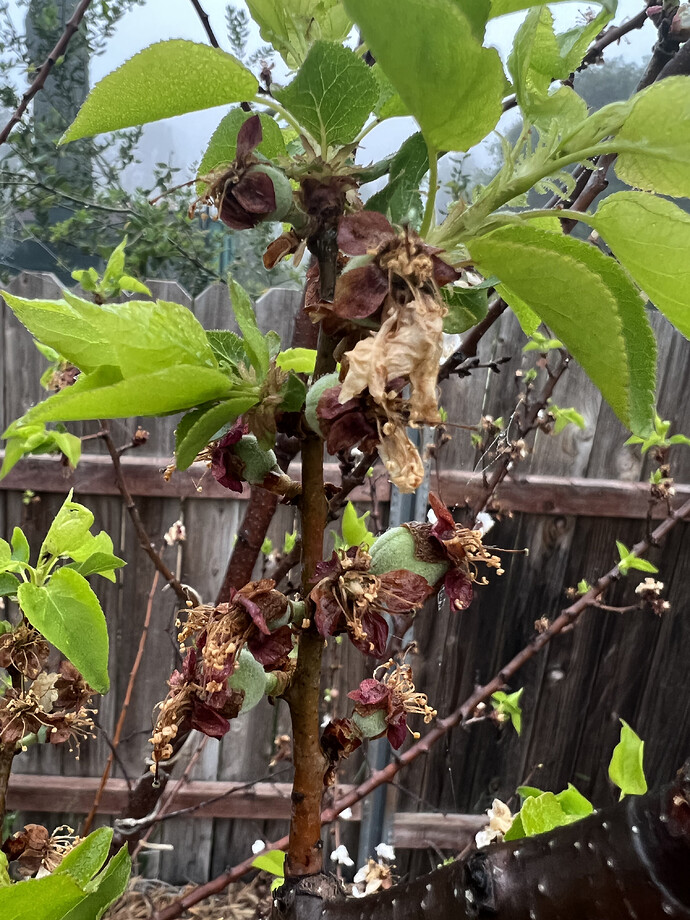