Starting a 2022 thread for those of us trying to grow cherries in low chill areas. I have been doing cherry grafts, growing trees on precocious rootstock, hand pollinating, etc. This year I have a ton of spurs everywhere. However, we literally have had zero chill hours in my yard in January. I have not seen it go below 45 since around Christmas. The good thing is we had decent chill hours the month before but still, we are probably between 100 and 200 hours at most. Any fruit I get this year will be a remarkable success.

That is why I was so confused to see Late Duke hinting at low chill traits, with buds starting to peak out in early January. Late Duke did set fruit last year, though they disappeared before ripening (usually its mice, though I can’t remember if I confirmed normal fruit development) 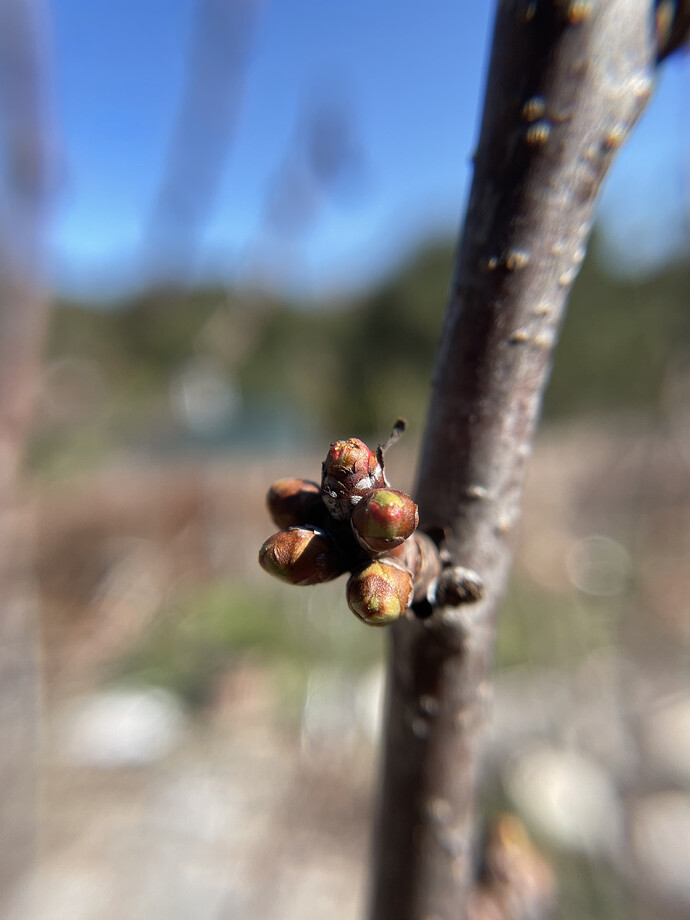 This is Late Duke taken Jan 9. All the buds are at the same stage, suggesting their timing is in synch up to now. All the other cherry cultivars are completely dormant, at least to visual inspection. I am resisting the temptation to speculate on the reasons for this. But I will quote my favorite fruit growing writer from the early 20th century:

“In California, as elsewhere, the Dukes and Morellos may succeed where the Hearts and Bigarreaux fail.” - Edward J Wickson, 1926

I have not seen it go below 45 since around Christmas.

You probably accumulated a lot of dynamic chilling portions.

Good point! The chill hours model is just a tool, and sort of a ridiculously oversimplified one (does not capture that chill earlier in the season is more effective than chill later in the season, 45-55 does something, just not as much, etc). The portions model seems better able to capture some of those things (starts earlier, counts chill up to 55). Conceptually more complicated though.

Looks like Minnie Royal, Royal Lee, and Royal Crimson (photos loaded in reverse order) might synch reasonably well this year. Because the bloom is scattered, hand pollination is needed for the early flowers to set. Minnie Royal is always the earliest. 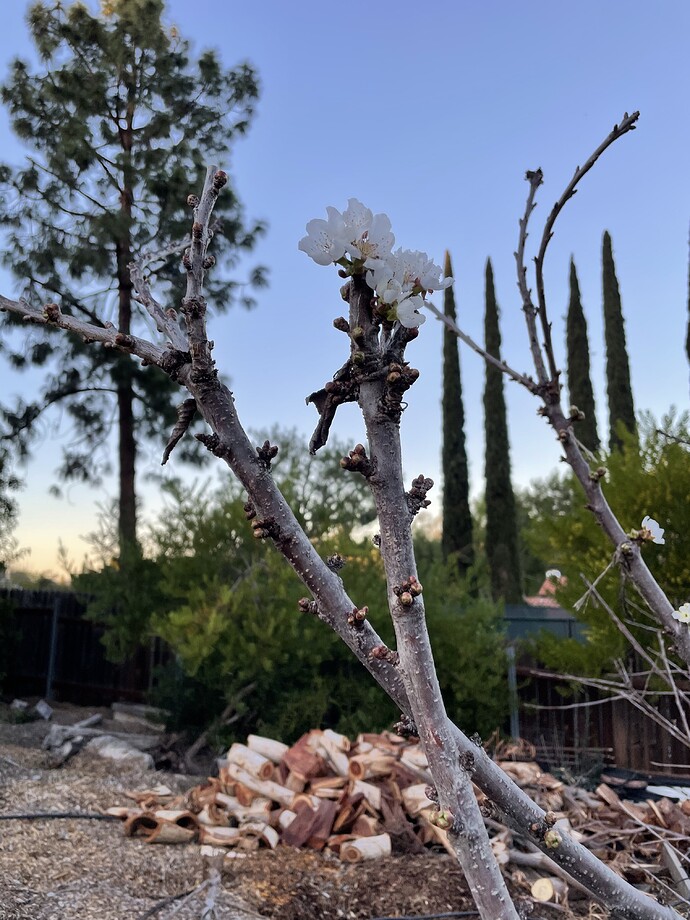 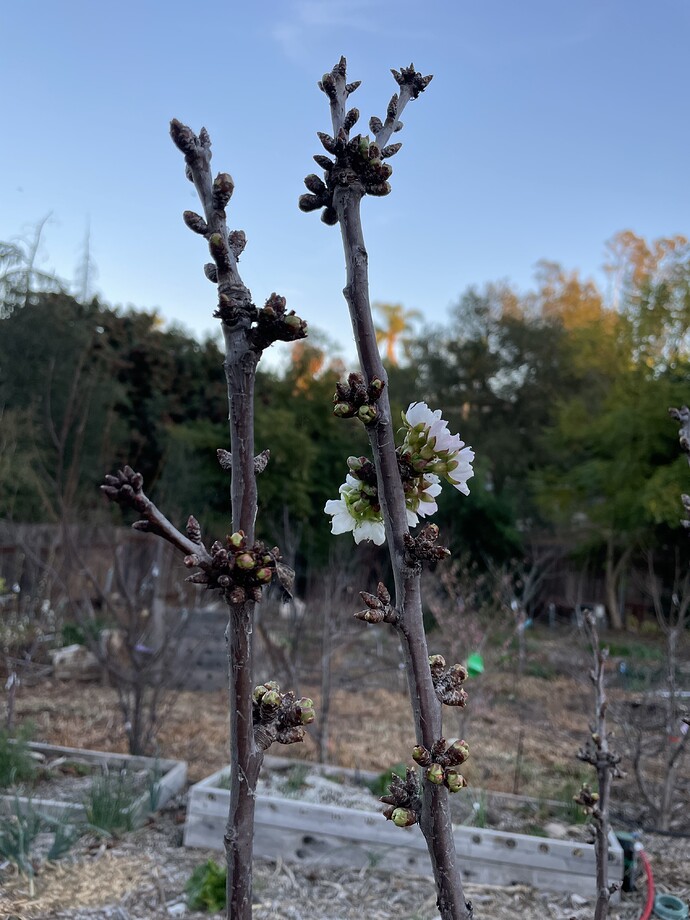 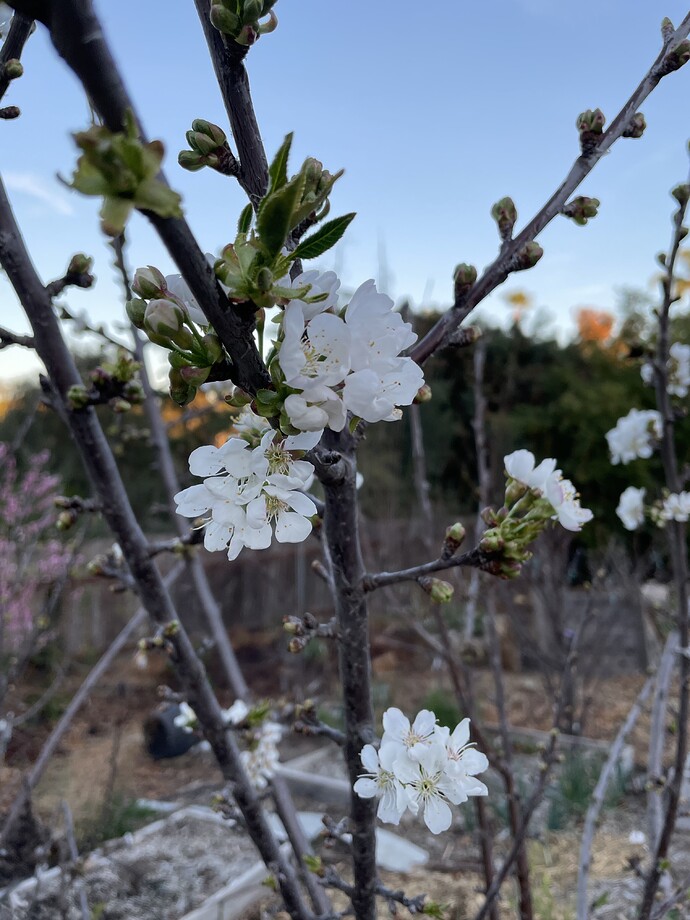 I found ants on some scattered Coral flowers. They want the nectar and steal the chance for pollination. Bees don’t want to visit dry flowers. I am setting out bait to control the ants. In addition to scattered bloom, Argentine ants are another barrier to fruit set with Southern California low chill cherries. 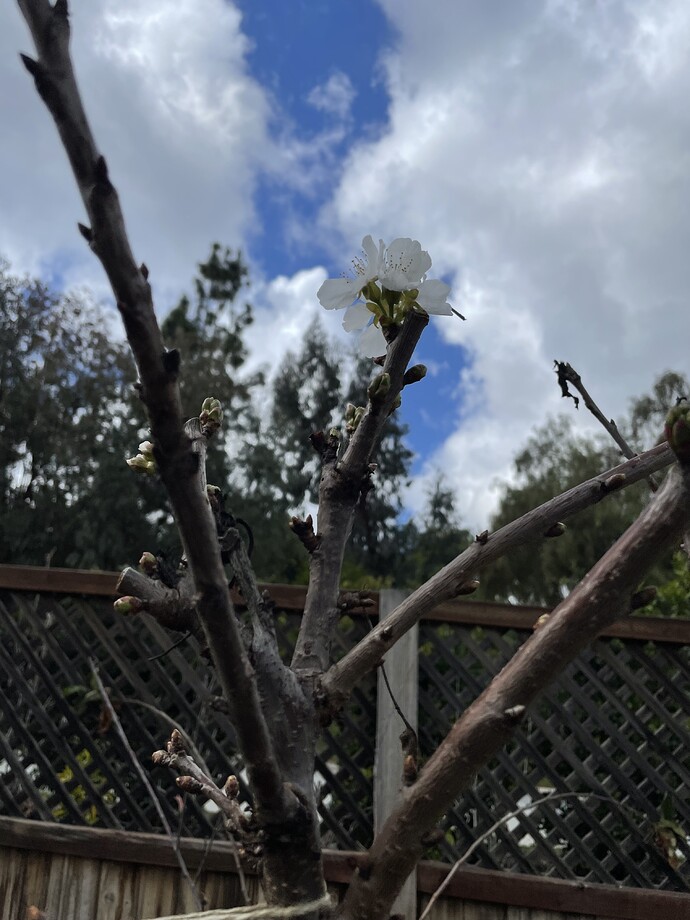 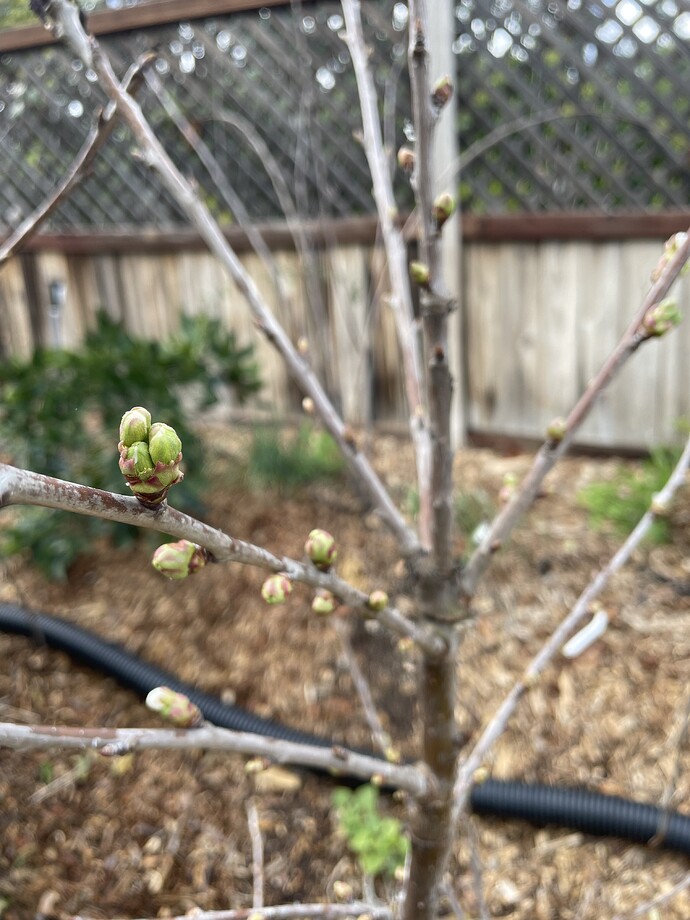 Brooks cherry (top) and Coral cherry (bottom) in my citrus and avocado section of least chill. Brooks has the first flower. It is overlapping with royal lee, Minnie royal, and Royal crimson. In another part of the yard it is about a week or two behind.

Here is a tree of Minnie Royal with a graft of Royal Lee in it. I put the actual graft of royal Lee in it, thinking that if a bee visits this tree it is more likely to pollinate. Interestingly for whatever reason the synch was actually pretty good on this tree. I do notice variation from tree to tree so I thought this might take out a variable. 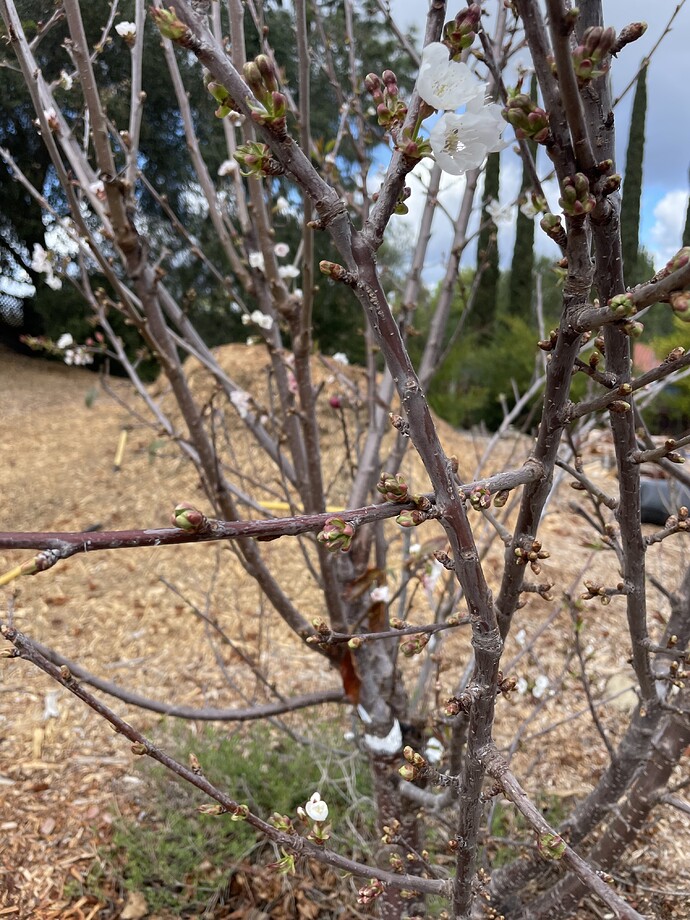 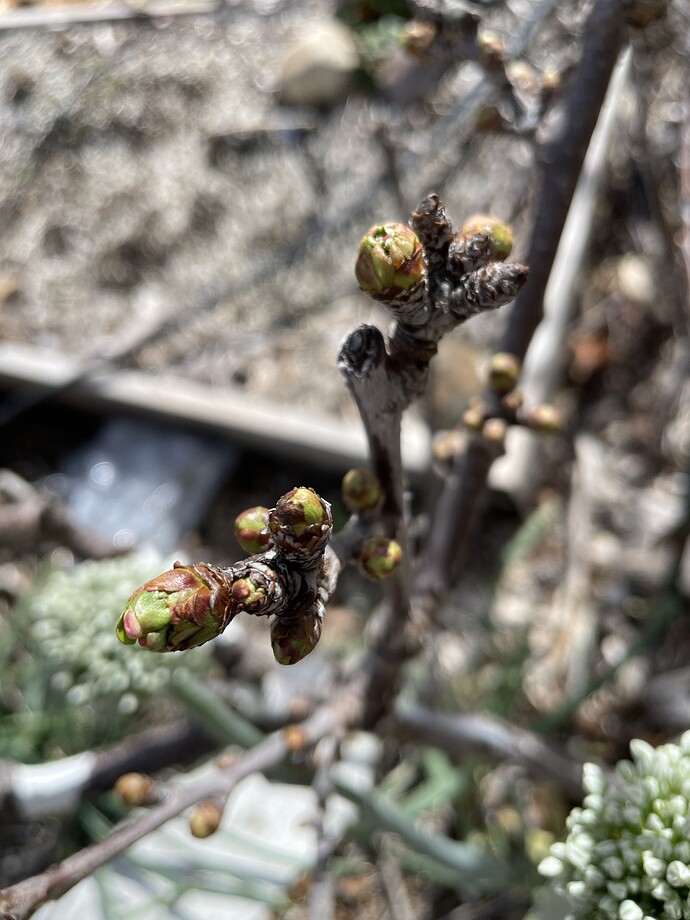 This is a graft of Burbank Cherry. It seems to be moving along nicely, but this tree is on gisela rootstock. It flowers earlier by about a week. It also is in an area of my yard with maximum chill and maximum sunlight. Both of those factors seem to make flowers come earlier.

Gisela rootstocks have been reported to produce earlier blooming, by nearly a week. Here are my Brooks cherry grafts on various trees. 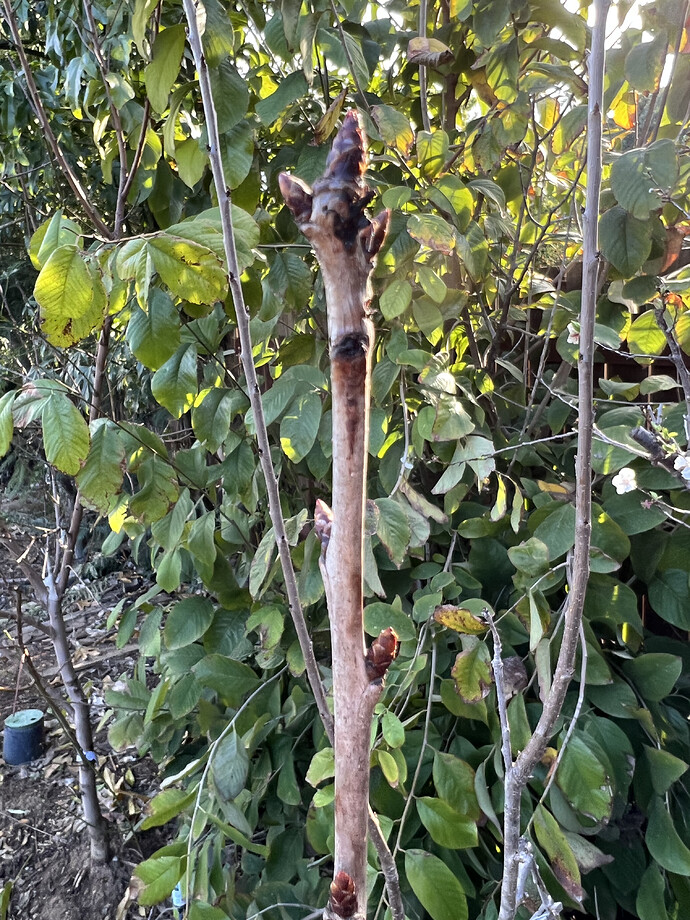 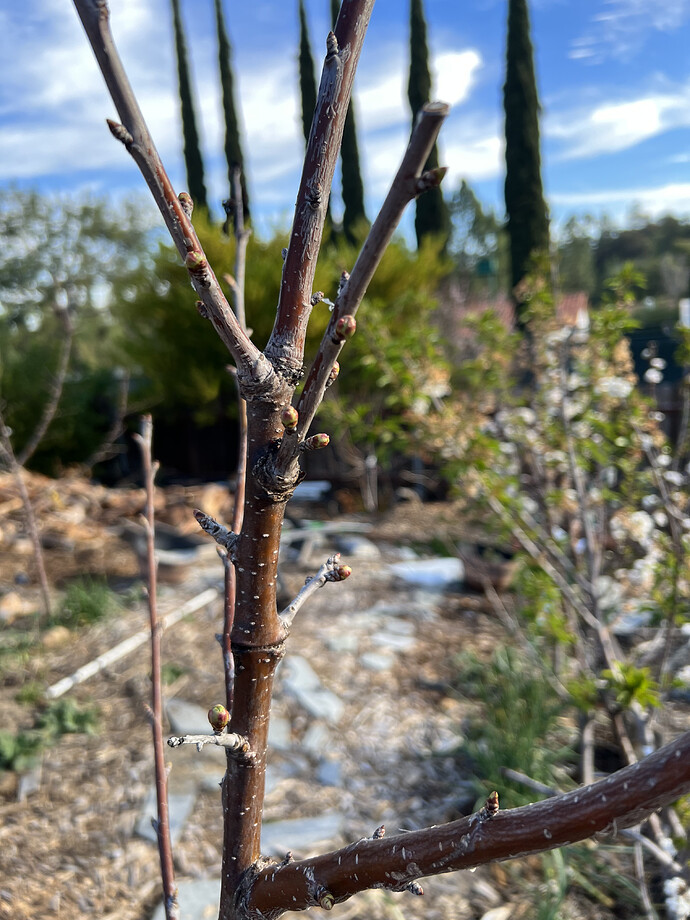 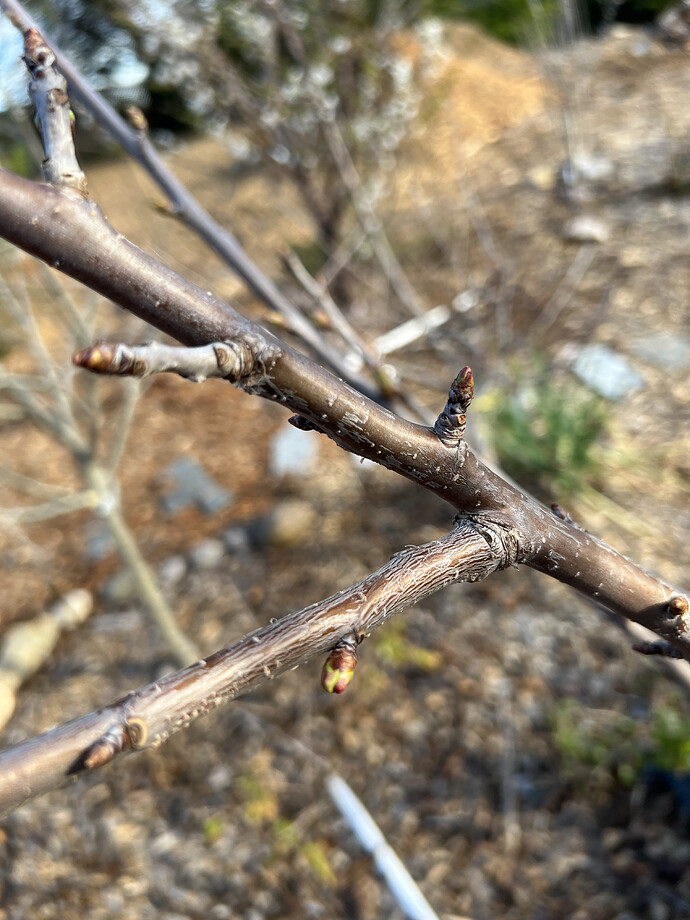 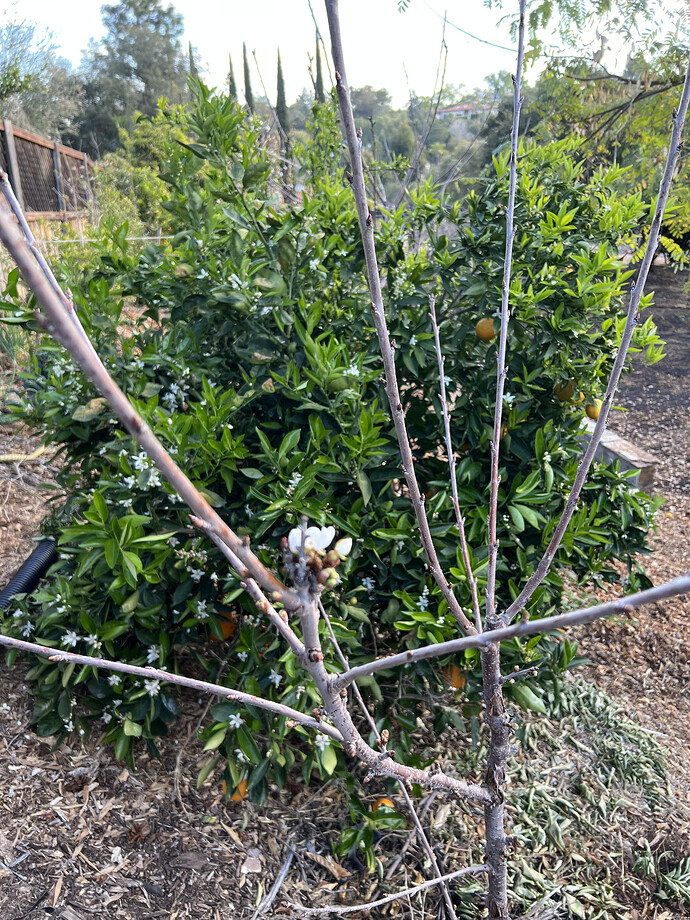 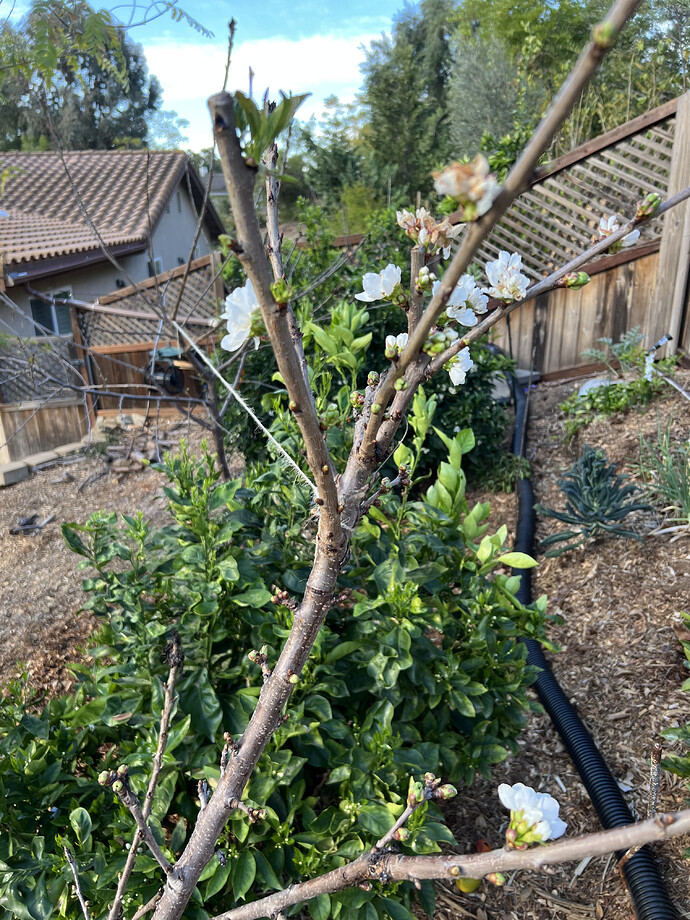 Brooks on Gisela 6 at top of tree: 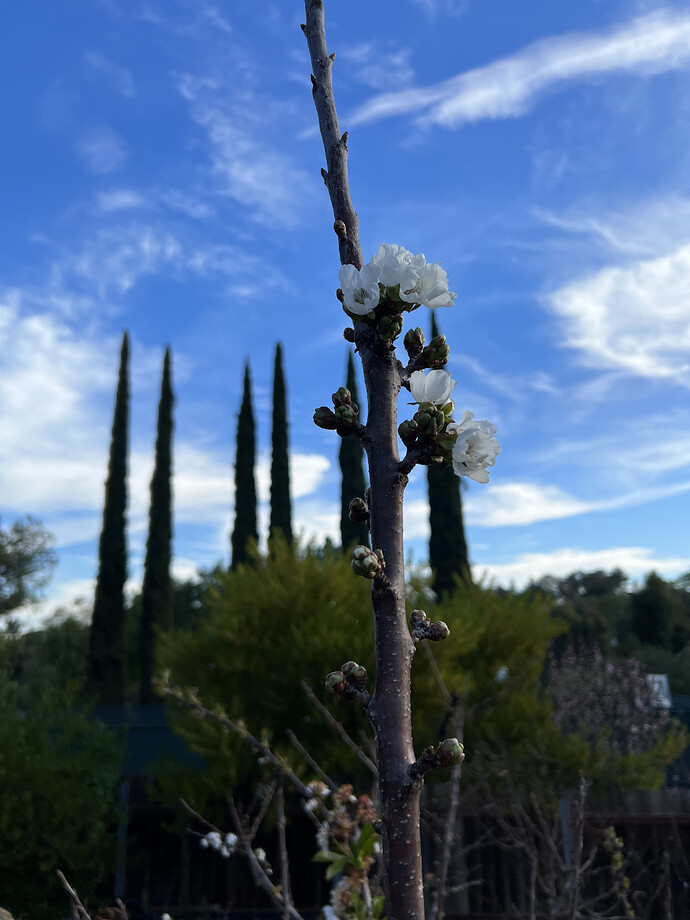 Brooks on Gisela 6 at bottom of different tree: 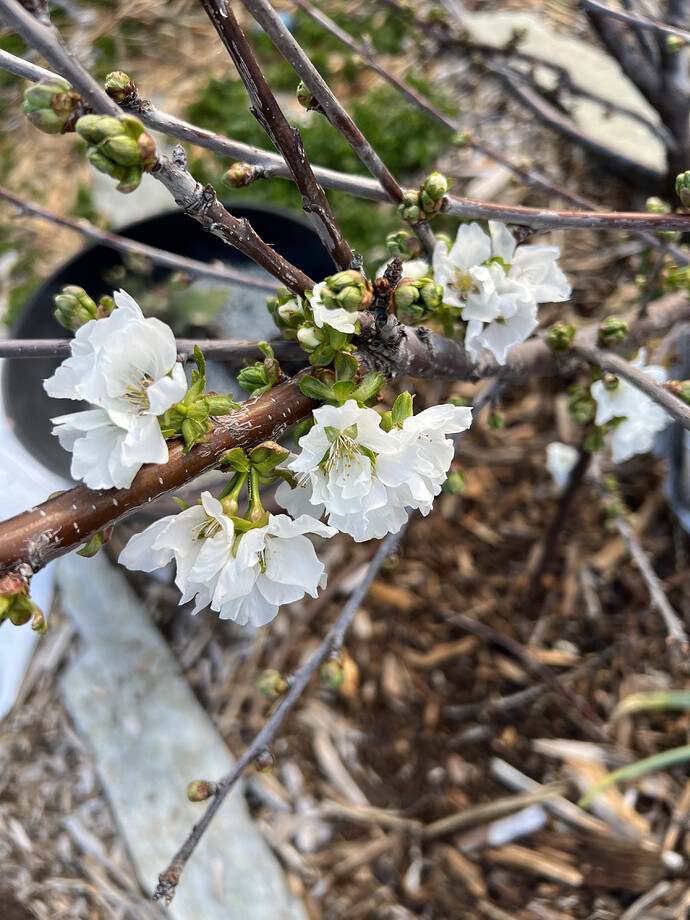 There may be some variations in age of trees, the fact that most of these are mere grafts rather than full trees, exposure to morning light, etc. But in general whatever I graft on Gisela rootstocks blooms about a week earlier. I suspect that Gisela rootstocks are better for So Cal low chill situations. And it certainly is a tool in the toolkit for synchronizing bloom for pollination.

I have a Minnie Lee and a Royal Lee planted in the same hole. This year I have tons of spurs and they look great. Really hoping I get a lot of cherries this year. I got just a handful last year. Im in Southern OC 10b. 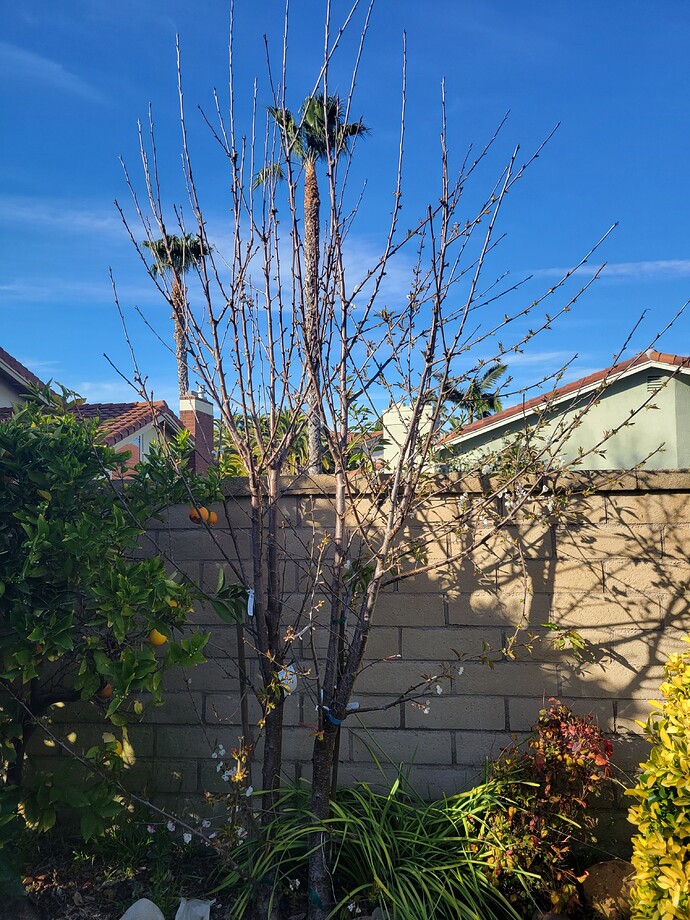 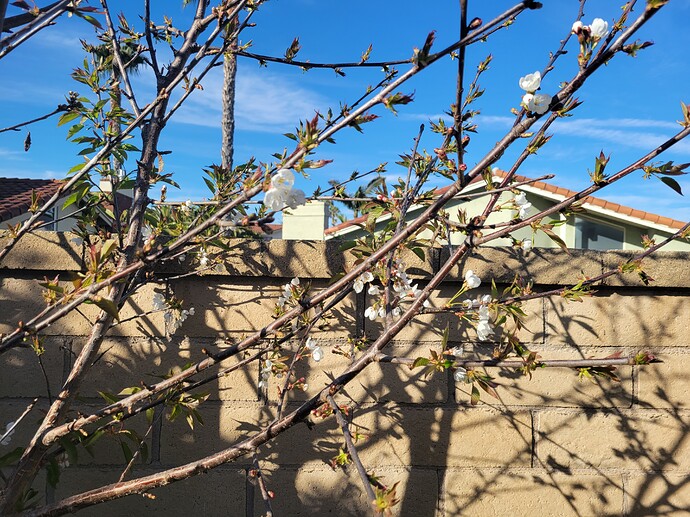 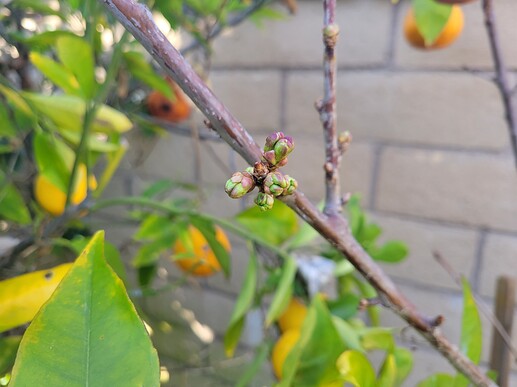 Great! You might want to hand pollinate a test branch. When I did that I got a lot of fruit only on those branches, suggesting I had a pollinator problem. I hope you get a ton of fruit everywhere, which would suggest you don’t.

We have bees in the yard. I havent seen them in the cherries though. Im happy to hand pollinate.

Took a painters brush out there that I use for other things and Im not really getting any pollen that I can see off the flowers. Maybe too early?

It had rained the day before. Possible the pollen got washed out.

Send me pictures if you see pollen, I did not realize one could see it. I just brush without really inspecting and it seems to work. I assume it just looks like dust flecks? Thanks. 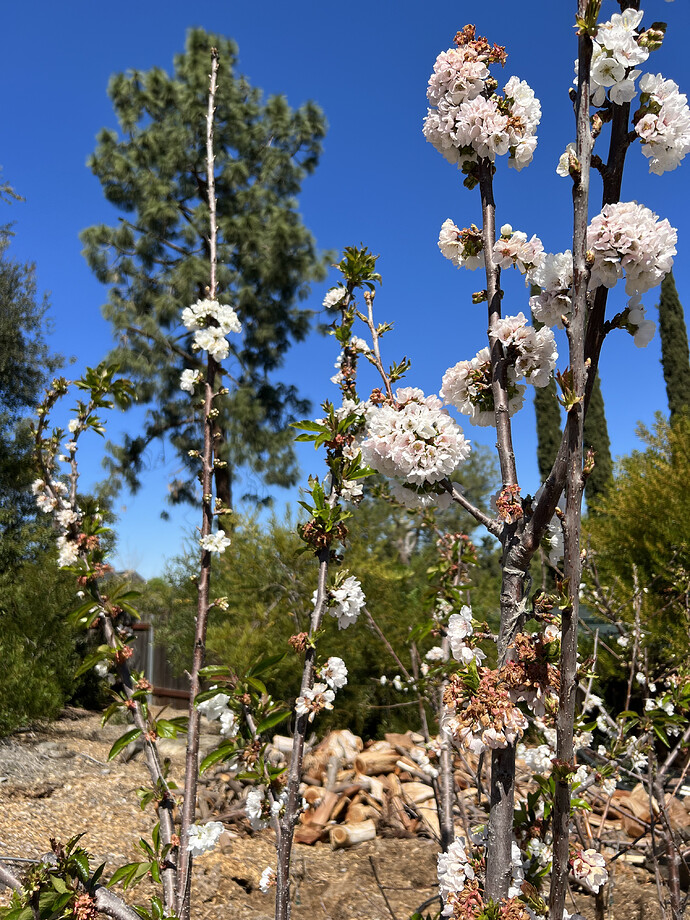 This is Brooks (far vertical branch, just starting) and Royal Lee in bloom at the same time. If you don’t get enough cross-pollination of Royal Lee by Minnie Royal, consider grafting Brooks into your Royal Lee? Brooks is much earlier than Lapins, which is sometimes said to be low chill. 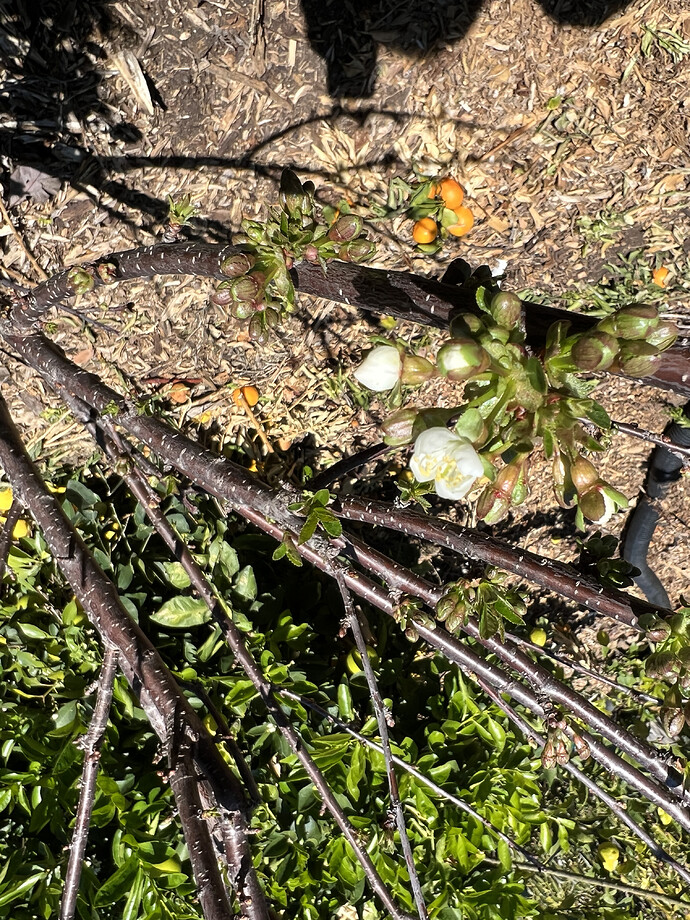 Kansas Sweet, first of the tart cherries to bloom in San Diego (of the ones I have tried so far). 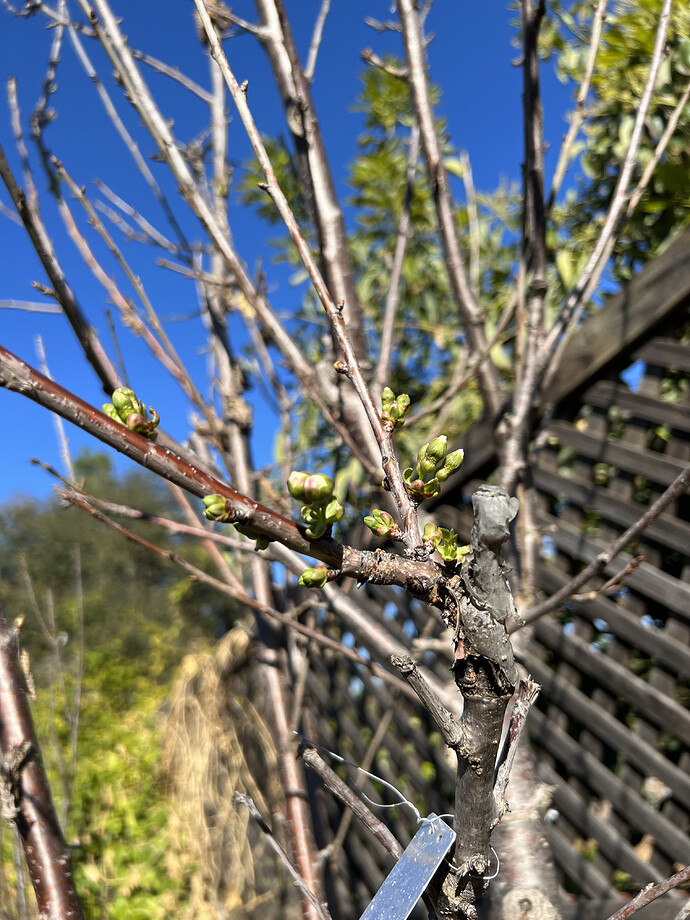 Brooks graft on Rainier cherry, showing it is significantly earlier than traditional high chill cultivars. I planted Rainier several years ago to see what would happen. What happened is I wasted 30 bucks. But it is a pretty tree. And quite vigorous, one of the few that did not die despite being planted in worse soil. Rootstock is Colt. 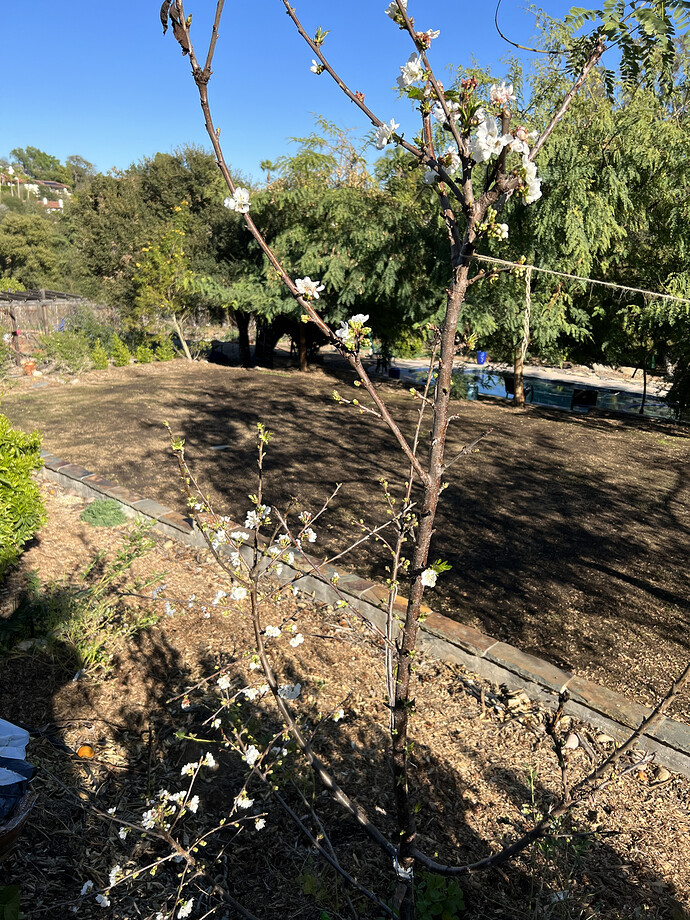 Brooks above and Coral below. The synch on these cultivars is incredible so far, anywhere in the yard, regardless of what they are grafted on. Yes, they are higher chill by bloom time (2 weeks later than MR/RL/RC) but they seem nicely in synch. Hoping to see some successful fruit set!