I have written to this Chinese professor a couple of times (I live in California) to see when these varieties will be released to the public and she has never been able to give me a date, but I am looking forward to seeing them sooner or later. 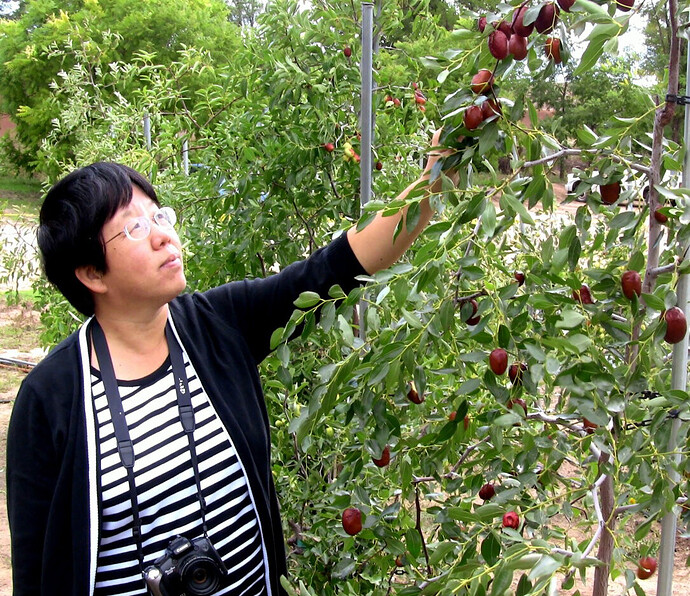 Late frosts in northern New Mexico have a significant financial impact for fruit growers in the area. The problem is not just with apple trees, which may only set fruit five or six years out of 10, but also the stone fruits, such as apricot and...

I went to one of her grafting workshops a couple of years ago and saw the research field. These trees grow very slowly, so don’t expect major releases anytime soon.
This past summer, I managed to get a couple of varieties in pots from Shirley Meyers in CA such as Kumme, Autumn Beauty and Li Zhou. She had about thirty pots of various varieties left and once these are gone she’s retiring especially after selling her jujube farm.
How many varieties do you have?

I have at least 40 varieties. I gave Roger Meyer Autumn Beauty, Winter Delight and Sweet-Tart. Clifford England has more than I do.

main reason for the slow growth(i think) is the shorter growing season there, plus the cool night time temps even in summer, due to high elevation. Understandably though, the area is subject to late frosts, where conventional fruit trees are likely to fail, so perhaps the reason she’s trying to find the most adapted variety there.

at another permie website she asked me if i lived in az, as she was looking for a place to grow jujus in az-- obviously a place where jujus will grow so much faster. Hoping she might be interested in establishing a field station in vegas instead, where i’d gladly volunteer!

Clifford England has more than I do.

Cliff might even have more than professor Yao. I saw his list, and i checked it twice!

LOL. I think she asked me if I lived in Arizona too. I had forgotten that. I understand why she is trying out jujubes in NM, but it does seem like a lousy place to grow them (nothing against NM, I was born there). She has the same problem I sometimes have, but worse, which is cool night time temperatures during the growing season. We might have a 105 degree day followed by a 55 degree night and that’s when I think jujube fruit flavors do not develop well and the trees do not grow well.

I think she asked me if I lived in Arizona too.

sure bears repeating-- it is a small world

It takes a long time to find the ideal variety for a specific zone.
As an example, I was told by Dr. Yao that Sherwood and GA866 are late producing in NM, and without much fruit. She’s hoping that perhaps they might do better when they get older.

I saw his list, and i checked it twice!

I have been reading up on the various sites etc recommended by this group for Jujubes…thank you! It seems like with all of the many the jujube varieties what is missing is a basic comparison chart showing first ripening, fruit size, quality etc. I want to try 2 or max 3 varieties that I will be growing in pots in Zone 5 (intent to bring in garage during winter). I am looking for earliest ripening, best taste (fresh eating), and ideally compact growth. Based on what I have tried to piece together (sometimes conflicting advice…) I am thinking of Li, Honey Jar, and maybe Autumn Beauty or Black Sea. Would appreciate any further input from this group. Thanks!

One other question please…what is the practical difference between grafted and ungrafted Jujubes? Do I want bareroot or gallon pots…or it doesn’t really matter?

I want to try 2 or max 3 varieties that I will be growing in pots in Zone 5 (intent to bring in garage during winter). I am looking for earliest ripening, best taste (fresh eating), and ideally compact growth.

Number 1 would be Honey Jar. After that, 2nd/3rd choices could be Autumn Beauty/Black Sea (from groups’s feedback- I haven’t fruited either, though I have a 1 yr old BS and a AB graft which may have made it) or Sugar Cane (second best after HJ for me). I’ve had too many bad Li from Chinatown to be very high on it, but I from other’s comments it must be possible to grow it well. On the positive for Li, it will be easy to find, you can get a larger tree (DWN or ToA should both be almost bearing age), and it is supposed to do well in terms of self-pollination.

In a pot, all will be pretty small. I grew some in pots for a few years and really stunted them. But, if you are using a large and are going to care for it well enough that size becomes an issue, So is a dwarfing variety, which should also be pretty easy to find and make good fruit (not as good as HJ or SC though).

what is the practical difference between grafted and ungrafted Jujubes?

The big difference is in the suckers that come up. The grafted ones will send up suckers from the rootstock variety, which don’t produce good fruit unless you graft them. The ungrafted ones have the same variety under ground, so any suckers will be true to type.

Do I want bareroot or gallon pots

Depends- for late (hot) season planting, pots are often better (in general). For early spring, bare root are usually bigger, unless you pay a ton to ship a large potted one.

I have written to this Chinese professor a couple of times (I live in California) to see when these varieties will be released to the public and she has never been able to give me a date, but I am looking forward to seeing them sooner or later.

I was looking at jujube pics in the Facebook group recently and Dr Yao mentioned that some of the new varieties are becoming available. You can email this site to make reservations for next spring.

I don’t think that they have most of the new varieties propagated yet, but I was able to reserve Alcalde #1 and Fucuimi, as well as Russian #2 and Dongzao (Winter jujube) for next spring.

Lots of info about the new varieties (check out the “For fresh eating” link on the left):
http://aces.nmsu.edu/jujube/

On the Facebook pages it was mentioned that Alcalde #1 seemed to be recommended for the shorter growing seasons. It looks nice. @mamuang

Katy,
You are such an enabler

I plan to remove one large tree in the front yard to make way for a So. I will try to squeeze a Massandra in that area, too, when my husband is not looking!!!

Hehehehe. Can you sneak two in there?

Will try my best.

Will try my best.

It depends on how big of a tree that you are removing- you can fit quite a bit in the shadow of a 80’ monster, or just 1 if it is a tiny sapling.

I will try to squeeze a Massandra in that area, too, when my husband is not looking!!!

Burnt Ridge mentions that both So and Massandra are naturally dwarfing, so that helps your chances of getting both in there.

On the Facebook pages it was mentioned that Alcalde #1 seemed to be recommended for the shorter growing seasons. It looks nice.

Yes, I would guess that is one of the reasons they started propagating that tree- it could be more widely appealing if it works well outside the warm sunny parts of the country.

For those not in the Facebook group, here are the two pics of Alcalde #1. Looks pretty good to me. Getting something to ripen early (though it won’t necessarily be that early) would be great. 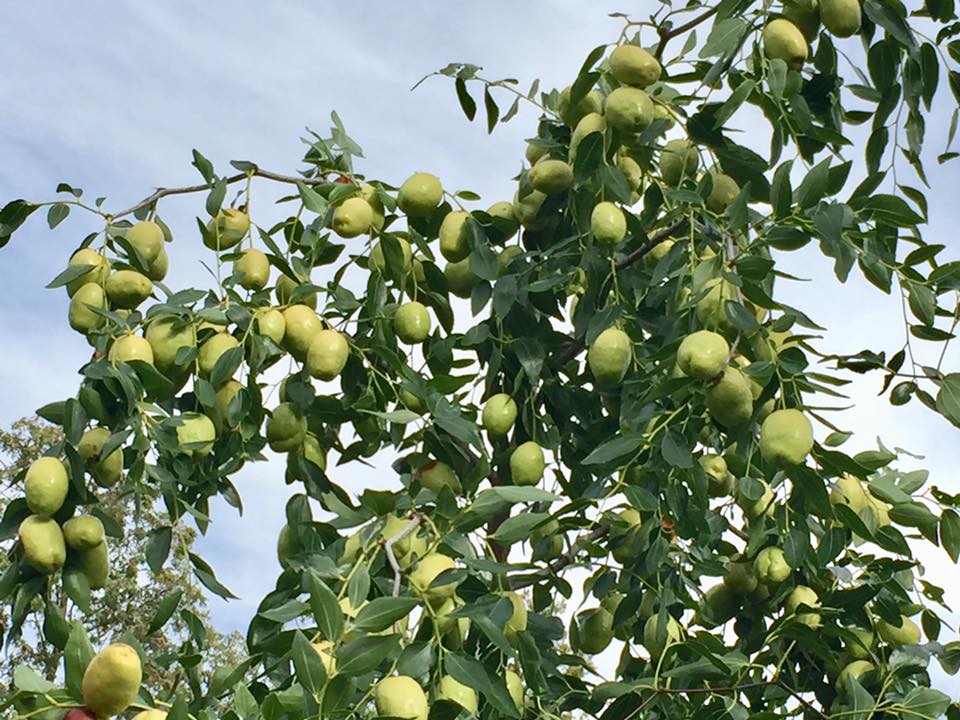 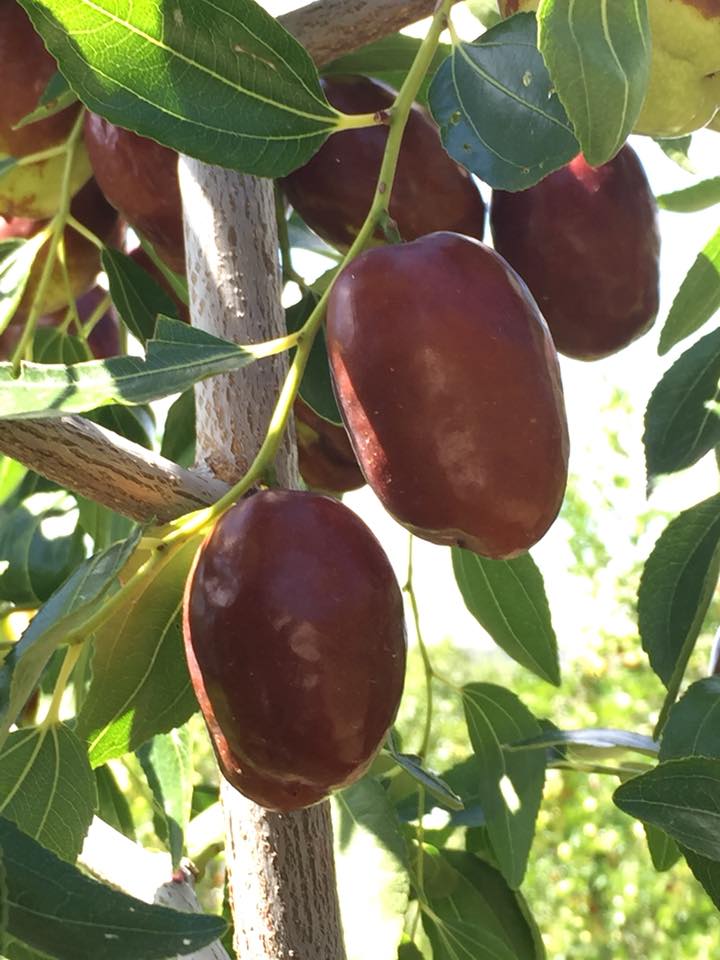 For comparison, here are my So from today: 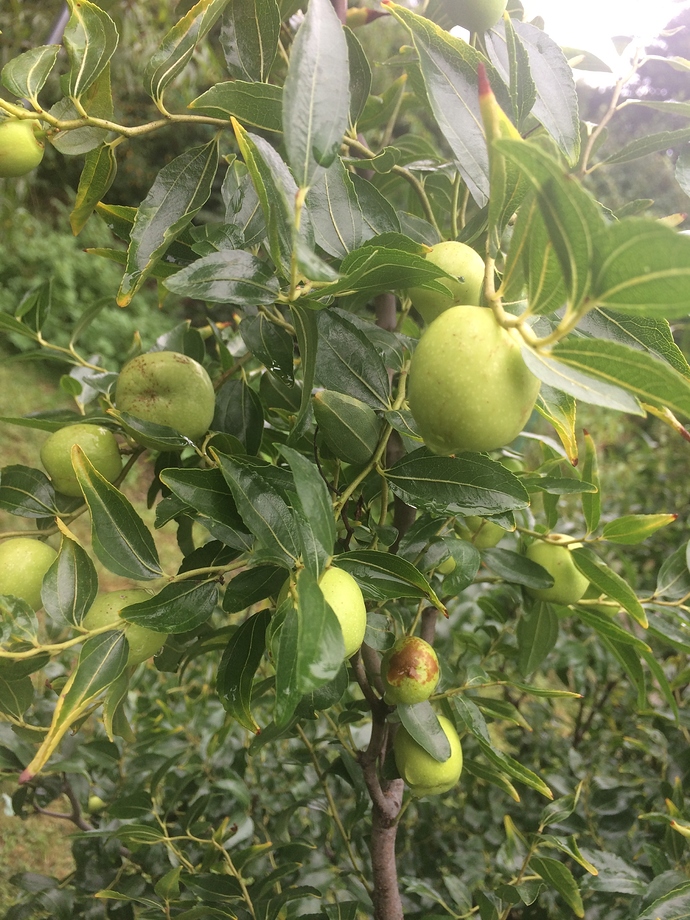 Bob,
This tree is a 12 year old Golden Rain tree, a gift for our 10th anniversary!!! Somehow, our cruel winters have caused quite a damage to the tree. 1/3 of it is now dead. The rest probably will follow in a few years. But I need the space now so the tree has to go. Our marriage will survive without the tree

It is not a big tree but So and Massadra will likely be about 8’ apart in that area.