Can anyone tell me the differences in the numbered russian types? Are they all similar, “small sweet early”? Or are are there significant differences? One larger? One more tart flavor?
Russian 1-6 Jujubes:

@KYnuttrees Cliff England may have the answers.

I’ve only heard of Russian #2. No experience here…

I believe the last one is Chinese. I have no idea about the translation that nursery did.

Hi @PaulinKansas6b, hope to hear from your experience with russian jujus in kansas! Unfortunately we only got to try 2 out of the 6 you posted, and could only recall russian#2(supposedly the same as kitaiski60) . Also couldn’t recall the other russian cultivar that we grew(possibly 29-16 toc or sovietski), but the fruits were so coarse we didn’t even bother documenting it.

believe the last one is Chinese

i agree. It was either a chinese cultivar that the soviets liked and didn’t change the name. Or that it was actually bred by the russians which the chinese liked and re-named. Jujus can be bred readily from seed, and highly unlikely to have the same exact genetics as either of its parents

incidentally, “Ta” is large in mandarin, and “Tsao” is common name for jujube(of any variety) in chinese.

we have a photo of russian#2 here

the trademarked jujus i obtained from burntridgenursery and one green world(which involved lots of confusion and uncertainty, even up to this day), some of them had to order twice just to check for differences, since labeling errors occur all the time.

while the kitaiski and my other unrecalled russian juju was from R. Meyer.

btw, @castanea should be included in the ‘subpoena’

. Not sure if castanea has grown any in that list, but likely may have come across some of them-- being based in california. Actually think castanea has tried as many, if not more, cultivars as i have.

When Roger was first selling these I told him I wanted to try one of them but knew nothing about them. He sent me the one he considered to be the best under his growing conditions. He was not impressed by the others but still thought they might do OK in colder areas. I don’t know which one he sent me but I assumed it was #2. I did not care for it and gave it away years ago. It was not very sweet and had an odd texture.

I got a Russia #2 tree from Chinese Red Date nursery and some Russian #4 wood from Cliff England this spring, so maybe in a few years I’ll have more info. I also have Massandra, Black Sea, and Coco, but I’ve only gotten 1 fruit so far (a Massandra which was very good).

Thank yall for all the info! Very interesting! So it seems these russians havent been trialed very extensively yet!

it seems these russians havent been trialed very extensively yet!

definitely not, but as castanea mentioned, might do better in colder regions.

them soviets thrive and revel in their russian winters(ask napoleon and hitler), and evidently enjoy mild summers. Am sure their jujus are just about the same

i looked it up and Sochi supposedly is the ‘hottest’ city in Russia, where their record high in summer was a puny 102.9F

that is spring temperature here in vegas, haha

that is intriguing. Didn’t know lang’s official name in chinese.
there is this ‘ta yuan tsao’ (not ta yan tsao) have come across but is supposedly round and not pear shaped

Correctly it should be Та-ян-цзяо This name is used in Russia, Ukraine. They don’t know it as Lang.

I figured that I would check in with an update on my Russian varieties. Both seem relatively productive for my climate.

Russia #4 graft has 10 fruit on it. It is grafted on a Sugar Cane and is by far the most productive branch. It’s hard to compare between trees, but maybe within the same tree can help illustrate relative productivity (in a particular situation):

This tree wasn’t sprayed by GA3 (the Russia #2 one was). All branch measurements approximate and only counting main branches…

Russian-Ukrainian cultivars definitely seem worth trialing in zones 6-7. Of my five varieties, all were killed to the rootstock by late hard freezes this spring save one: Coco, which came out of the Nikitsky Botanical Garden in Yalta. It took severe damage-‐-and there’s fungal growth on the trunk which I assume is saphrophytic–but the scion is apparently healthy. May not survive longterm, but still pretty tough.

I’m pleased with the productivity of my Russian #2 tree. Unfortunately it ripens at exactly the same time as Honey Jar, and the fruit is comparable in size, sweetness and productivity. I wish one was a little later to ripen than the other. The only difference I can see is in the shape of the fruit - Russian #2 is more elongated. I recommend both for growing in the humid southeast USA. 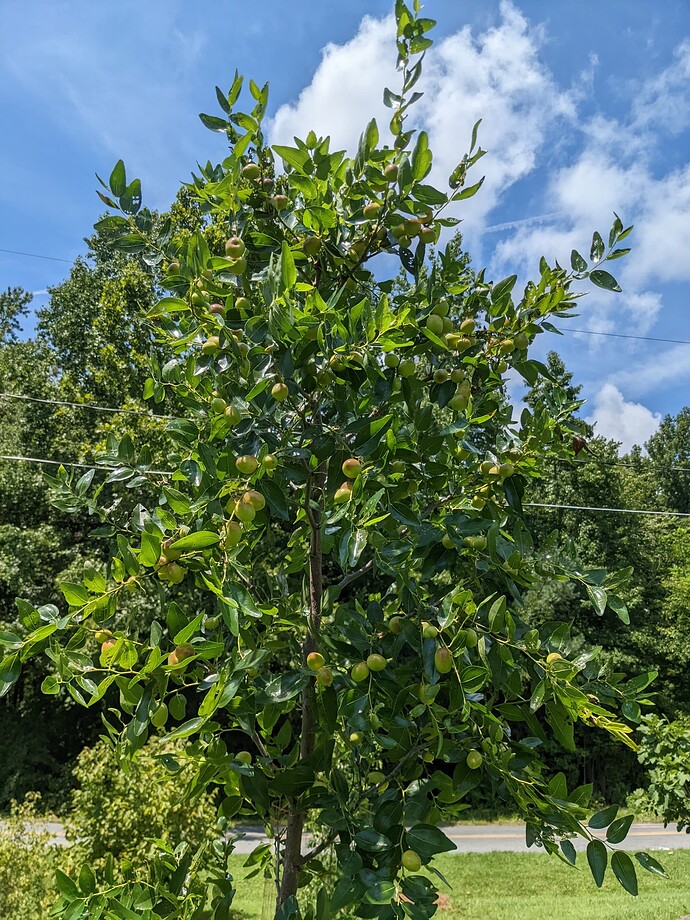