Advice about purchasing a container mandarin

Trying to choose between Nules Clementine, Brown Select Satsuma, and a Ponkan Mandarin. This would be a present for my mother who has just gotten into growing indoor citrus. I don’t know much about citrus but looking for advice on which to choose. Taste is the primary consideration, then ease of growing. My mom would prefer seedless or mostly seedless.

I don’t know about the other ones. Due to the easiness of growing Satsuma, this is the only variety that I would consider growing in container in my zone which is 8b. I bought two of them over two years ago. They are still in their original containers and yielded some fruit each year. They stay outside all winter long and so far have not shown any winter damage. The flavor is just as good as the ones you would get in store.

Why not choose a true seedless such as Frost Owari or Gold Nugget? They are available from Four Winds Growers.

I’d prefer to go with Brite Leaf because my mother also wants a few other things and Brite Leaf has a sale on right now giving half off some of their dwarf citrus. But I know Four Winds is an option.

Do you know what variety of satsuma you have?

I have Frost Owari Satsuma.

Due to the widespread infestations of CGD in the area, I’d be wary of purchasing any citrus from Florida.

I have two premium Satsumas from Walmart $38 when fully priced. Half price when on sale. They came from Saxton Becnel and sons, a wholesaler in TX.
I just added Arctic Frost Satsuma. These are really tiny for evaluation but are supposed to be the hardiest of all Satsumas. I agree with Richard about being wary of purchasing citrus fruit trees from Florida. In any case most if not all are prohibited from shipping.

The word “Arctic” was tacked by marketers. The “Frost Owari Satsuma” is so named because it was introduced by my grandfather’s cousin, Howard B. Frost.

Wow, Richard! Sounds like you have citrus-growing in the blood!

At any rate, I don’t think I’ll be able to go with Four Winds. I understand they have great stock, but their prices are pretty high and their shipping outrageous. I do understand they take a lot of care with packing and such, but at about $30 S/H for one tree…I just don’t think that makes financial sense for me. I mean, I’m sure their stuff is very good, but with the prices of the trees plus the S/H I’d probably just go with a different present.

Brite Leaf is in Florida and they will ship outside FL. Apparently they have USDA inspectors who perform visual inspections every month, do testing on their trees every six months, and they grow their trees in some kind of vacuum sealed greenhouse or something? I dunno. That sounded good enough to me to buy there, but if ya’ll don’t think it’s enough, maybe I’ll just go a different direction with the present.

Ponkan and Owari are my two favorites.
You won’t be disappointed with the Ponkan but it has seeds. It consistently has a brix reading of 12-13 while Owari usually runs 10-11.
Ponkan has a vertical growth like a willow tree so if you grow indoors height may be an issue. It is not as cold hardy as the Owari.
Coconut Coir is an excellent growing medium that you might consider.

Mine runs 15-16 – but I harvest them when fully ripe. Store bought mandarins are typically harvested early for ease of shipping. Many backyard growers of mandarins also harvest too early – wait until the skin is loose, at least at the stem end.

“All the satsuma crosses are the work of Dr. Ying Doon Moy, who was born in a small village in south China but immigrated to the U.S. in 1978”.

They also had another one called Orange Frost which I did not pick up.
http://texassuperstar.com/plants/satsuma_orange-frost/index.html

This tells me that the Satsumas produced in TX are different than the ones in CA.

You could read it here: 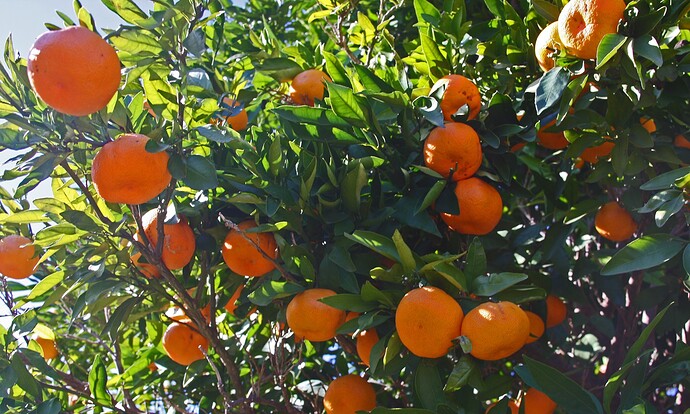 This tells me that the Satsumas produced in TX are different than the ones in CA.

No. They are either documented here or misrepresented in Texas:
http://www.citrusvariety.ucr.edu

“Me, I just know how to raise things
That was all I ever knew
Now, it all comes down to numbers
Now I’m glad that I have quit
Folks these days just don’t do nothin’ simply for the love of it”

Richard
I have never heard of a BRIX reading that high.