I didn’t attend Cidercon in Oakland, but when I heard there was going to be a special event discussing Albert Etter (famed strawberry and apple breeder) I knew I had to go. Wickson and Pink Pearl are the two apples that rekindled my interest in heirloom apples and apple breeding and I’ve always wanted to learn more about their quirky inventor. Figured I’d write up some highlights here for those interested!

The event started with a short chat with John Bunker of Fedco and Daniel Bussey of The Illustrated History of Apples in the United States and Canada, both delightful. There was also a presentation of our site, Filoli Gardens itself, an interesting and beautiful “Gentleman’s Garden” with a focus on preserving old fruit varieties.

Tom Hart of Humboldt Cider Co then gave a presentation on Albert Etter. Anyone not familiar with him should give a look at the info on Greenmantle Nursery’s website, as he’s a fascinating character. Born in 1872, he was a plant-breeding prodigy, encouraged by his mother from a young age, and making the news for his impressive Dahlia breeding while he was still a child. He and his many brothers (including Walt of the Waltana apple) settled in Ettersburg and created homesteads - him, breeding strawberries and apples, and they helping with all aspects of his business. His wife Katherine (of the Katherine apple) also helped him, and was postmaster there and lived on the Etter homestead many years after Albert passed away. He spent his life breeding fruit of all sorts in Ettersburg, filling his massive experimental orchard with all sorts of unusual projects.

For those not familiar, Etter was fascinated with primitive apples, and loved to focus on crabs and red-fleshed varieties. His varieties have strong and often unusual flavors, spice notes in the crabs and berry flavors in the pink fruit. Wickson, Crimson Gold, and Pink Pearl have all found some measure of success these days but were considered a bit odd back then. The California Nursery Company released many of his apples to varying degrees of success. His strawberries were commercially successful both then and now and are still primary varieties propagated in some countries. Mountain Rose/Hidden Rose/Airlie Red Flesh, a pink-fleshed apple extremely similar to Pink Pearl (but more commercially successful), was also discovered in an area that Etter had sent some of his scions, making it likely that it was also an Etter apple.

Greenmantle Nursery famously investigated Etter’s lost experimental orchard, years after his death, and released 7 more of his crabs and 7 more of his pink-fleshed apples (but only under tight control). I can’t be the only person who has been stressed thinking about what other varieties might have been left there getting destroyed by time and cows. It turns out that Greenmantle had had a falling out with the Etter descendants and the orchard had once again been abandoned, until the folks at Humboldt Cider Co connected with the new owners and were allowed in to care for the orchard. They’ve been nursing trees back to health, cataloging and propagating Etter’s remaining grafts, and harvesting apples for cider. I’m not sure of the plans for the varieties themselves (I’m itching for scions of course), but they’ve been extremely careful to save anything that Etter appeared to have bred. Super exciting news as Albert died fully 70 years ago. More good news - it also appears that Etter was breeding pears, and many are surviving today. Some folks from the National Park Service have also been helping in preserving and propagating the old trees, and the same team also helped save many old local apple varieties that were nearly wiped out in the Carr fire, somewhat south of there.

After the talk we had an opportunity to taste hard cider and nibble Wickson apples (truly a delicious crab). There was a cider made from Filoli apples, another single-varietal made of Wickson, and Humboldt Cider Co’s field blend of the apples found in the old Etter orchard. I find Wickson to be hit or miss as a single-varietal, but the Tilted Shed Wickson cider is fantastic. The Etter blend from Humboldt was also amazing - though many of Etter’s apples are strongly flavored, they aren’t traditional cider apples, but together they make a surprisingly excellent cider. We didn’t get to taste them, but we also got to inspect many plates of apples saved from the lost orchard. As you can see below from my slightly blurry, post-cider pictures, an astonishing array of apples have been catalogued and rescued. Many more crabs of varying sizes, some gorgeous red-fleshed apples, and many interesting traditional-looking varieties. It’s extremely exciting to know that these apples are still out there, including many from Albert’s special tree near his house where he purportedly grafted his favorites.

We finished the day with a walk of the Filoli fruit tree orchards. They don’t specialize in Etter apples, but it would be a fun walk for anyone interested in heirloom fruit varieties. All in all, a very fun event, with a lot of history and news on Albert Etter that I haven’t seen shared anywhere else. 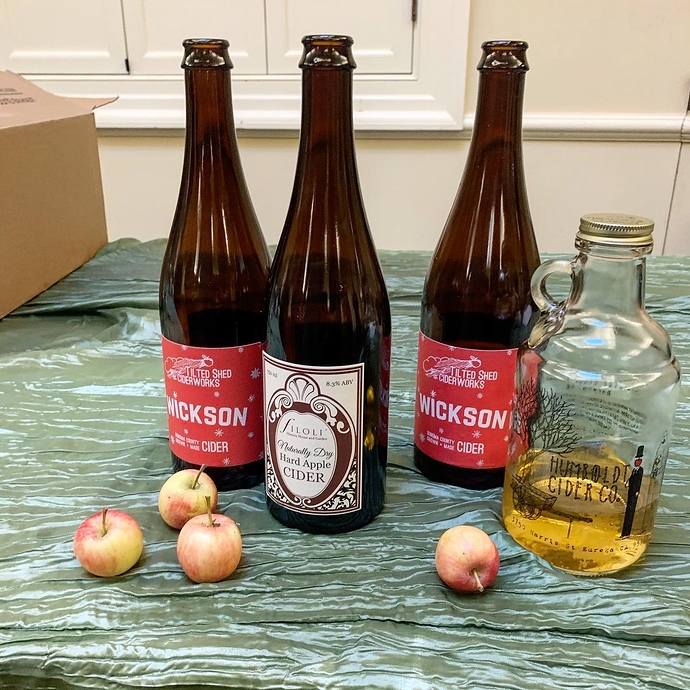 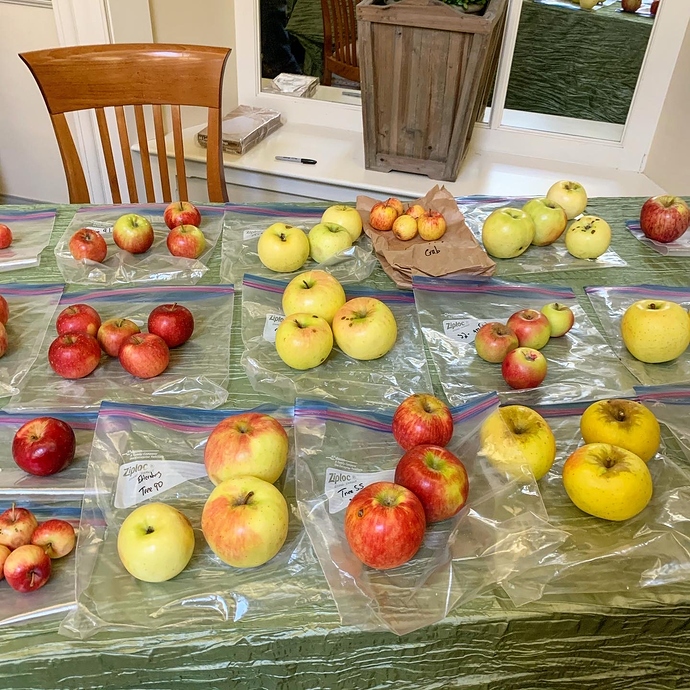 29 varieties salvaged from the old Etter experimental gardens, none of which appear to be known released apples. 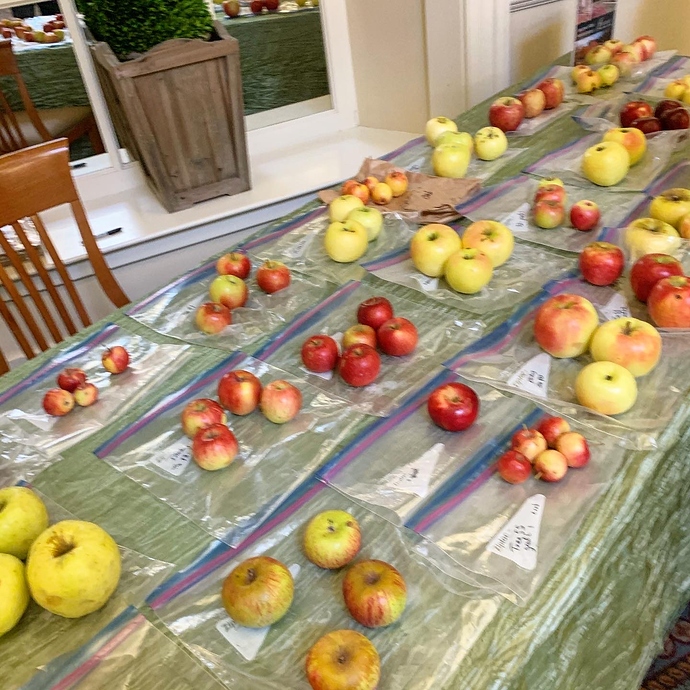 Another shot. Stunning apples of all sizes and shapes. 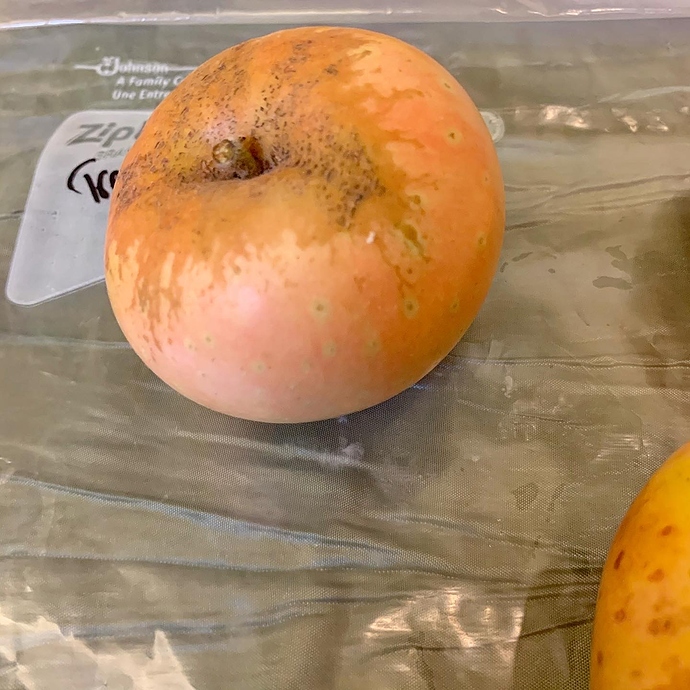 A gorgeous apple showing the standard signs of being yet another translucent-skinned, red-fleshed specimen, but not one of Etter’s known red-fleshed releases. 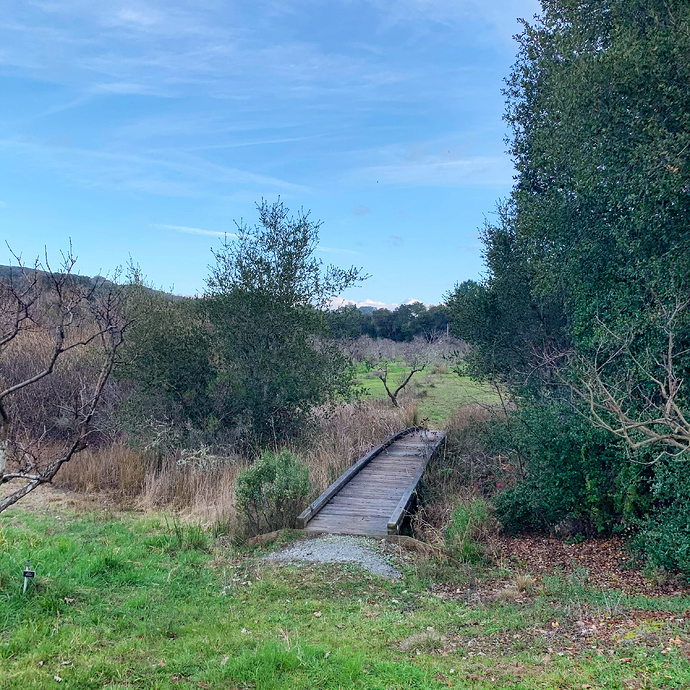 And finally, a pic with a hint of Filoli’s beautiful orchard!

Thanks for that report. Wish I’d known about this event, as I would have driven down there for it as well. Very glad to hear that the old Ettersburg orchard is being cared for properly again!

@Mer,
I’ve been interested in Etter’s apples for a while but not sure how well they will do in the East esp. in colder zones where summer is not that long. Several of his apples may not ripen in time in zone 6a.

I think his wife’s name was Katharine, the same as the apple. It was an unusual spelling.

Enjoyed your post will have to read up on Mr. Etter sounds like quite an interesting man.