I have heard rumors of this for a few years now that they really are no hardier than a normal Satsuma.

Who is the provider for these Citrus varieties?

TheNiceGuys is in Japan so the zones are similar but different. I think all the hybrids he mentions are Japan Native Papeda x citron, mandarin , maxima genus. So they are nothing like the cultivars we are used to coming out of the US or the tropics. kumquats have similar hardiness to Papeda’s but I doubt crosses of the two are going to yield anything similar to a sweet orange.

Kumquats start to bloom in the spring like most citrus. However, they take a long time to emerge from dormancy. The advantage is they dodge early frosts. The disadvantage is that they won’t get fully ripe if you have a short season or lack heat units.

Sudachi, Kabosu, yuzu are traditional Japanese papeda-mandarin hybrids, and should be fine in a 9 zoned Japan. Sour citrus are usually ok green, but sweet are not because of the heat requirement.

Early ripening mandarins like shikwasa and miyagawa seem to get good reviews.

Greenleaf Nursery was the distributor which has recently discontinued the line. I don’t know who they buyer is if there is one.

I wish we had a taglines with our names saying where we are because not all Zone 9s and Zone 8s are created equal. Even in the good old USA, Zone 8 Georgia is very, very different from Zone 8 Oregon. God bless.

I I think the main issue is not cold tolerance, but rather fruit ripening. These late ripening Mikans, or other fruit that’s listed as ripening in the December - March range, i’m wondering what’s required to pull that off. Since we start getting frost here in November, wouldn’t that make any of these fruit impossible to ripen here?

That depends on what the low temp tends to be there and in what months. Generally -3.5 C is when fruit begins to be damaged. So for most things, the question is, “When does it get that cold?”.

Wife whats this charge on the credit card.

You got that right. Even it survived zone 7, I doubt the flavor would be edible.

I dont dislike Trifoliate. My neighbor has one and dilute I think the flavor is dynamic and bold.

You probably don’t have enough heat. Here in CA the oranges are as sweet as orange soda. But we also have over 6 months > 80F and constant sunshine to sweeten things up. For example, people here closer to the ocean, who don’t get the months of heat, can’t grow oranges. Just lemons.

Also, Eureka Lemons are ever bearing in our 9B climate.

You might be missing something about the Southeastern United States. Our humidity and dense vegetation and proximity to the very warm Gulf Stream current in the Atlantic and even warmer Gulf of Mexico means that our weather is generally much more consistently hot every day and all 24 hours of the day during the growing season than is the case in California. It gets hot in our springs, summers and falls. We can get freezes during the shoulder seasons but the default is 80s during those same shoulder seasons. We will start seeing 80F days in South Georgia in late February and all over Georgia including Zone 7 regions by March. We will start seeing 90s in mid March many years. We see 80s and 90s in October and up through about half of November even though we can see frost in late October and often get a hard freeze at about Thanksgiving time.

We also don’t cool down at night during the growing season nearly as much as your western dryer climate or even your coastal climates that are impacted by a cold water current. With the new Frost Series fruits coming out of the University of Georgia which are reported to be cold tolerant to Zero, some of Zone 7 will be able to grow citrus with the use of moderate winter protection measures.

“Hardiness Zone” is only one part of the climate puzzle. Zone 8-7 California, especially on the coast, is much, much cooler in summer than even a Zone 6 on the east coast. Humidity makes a big difference because water vapor is very much a greenhouse gas.

Depends on the zone 7. I am near the northwestern fringe of zone 7. I don’t have a prayer of growing citrus here outside barring trifoliate or some new breeding miracle.

Yes, all zones have edges.

I was actually replying to TheNiceGuy in Japan regarding lack of heat. But regarding growing citrus on the South East Vs. California. This is not a “my climate is better than your climate” remark, but I’ll say this, there’s a reason California has an enormous commercial citrus industry. Also, humidity is certainly not your friend growing oranges. I’m actually inland CA - heat zone 7 trust me, we get plenty of days > 100f. As I mentioned I have a 15ft Washington Navel tree full of 5" dia sweet as you can imagine oranges right now. Not to mention I also have Mexican limes growing inground, which are the most frost sensitive of limes. And I’m at 37 degrees north in NorCal.

Hi humidity is not your friend when growing much of anything besides muscadines and maybe rabbit eye blueberries. The issue with hot and humid is disease and insect pests, and we get plenty of both. 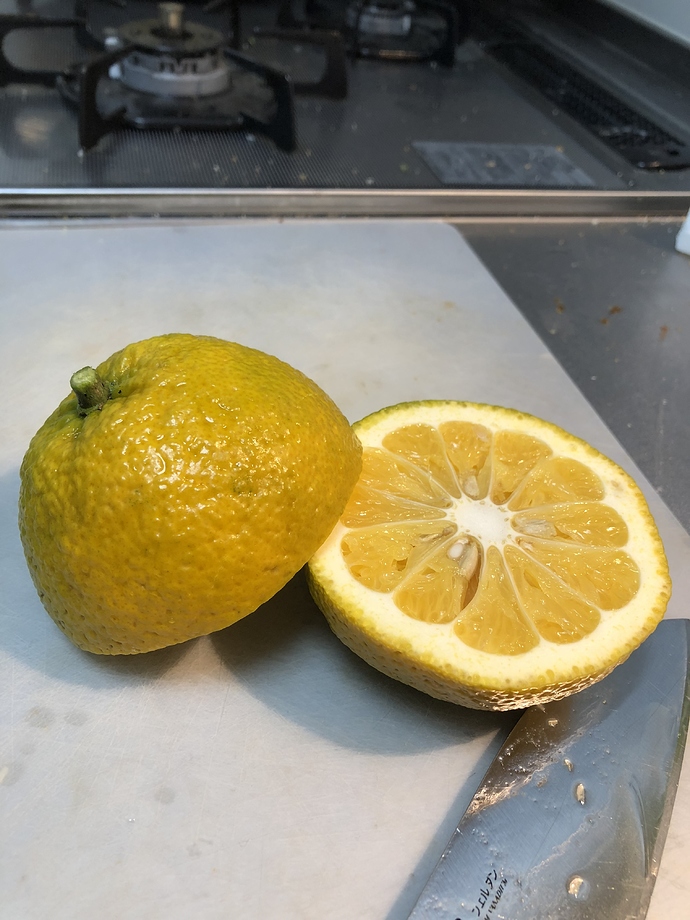 2C36E800-7C43-42DD-8F5C-E4EF06BFD65D.jpeg3024×4032 2.22 MB
A bit of information you may be interested in. I’ve been growing a Natsu Mikan (lit. “Summer Mikan”) mandarin variety for about four years outdoors in ground. It’s one of my toughest citrus and keeps most of its leaves throughout the winter. It is the only citrus I have, actually the only produce of any kind I have, that is producing past November. We are in the worst part of winter here, and I can harvest these early and they’re still juicy. They taste almost exactly like a yellow grapefruit to me. Apparently you can keep harvesting them until the end of spring.
They have a very thick skin, and they’re not the favorite taste of all my citrus. However, nothing else I’ve grown will give me fresh fruit at this time of year. Even Yuzu will have all the pulp dry out so you can only use the skin.
I’m just happy to have fresh citrus during the winter with such a large harvest window.
barry 2018-11-03 18:12:02 UTC #40

Here are some browns select satsuma just harvested. Pretty good flavor, but could use a tad more sugar. I watered a fertilized a lot trying to push the trees which probably hurt flavor. These are on dwarf flying dragon roots. 50 fruits on brown select tree and 25 on owari but owari are not quite ready. 3rd year trees about 6 ft tall. I put a blanket and light on them on the coldest nights and row cover plus garbage can of water otherwise. So far so good. Central AL. 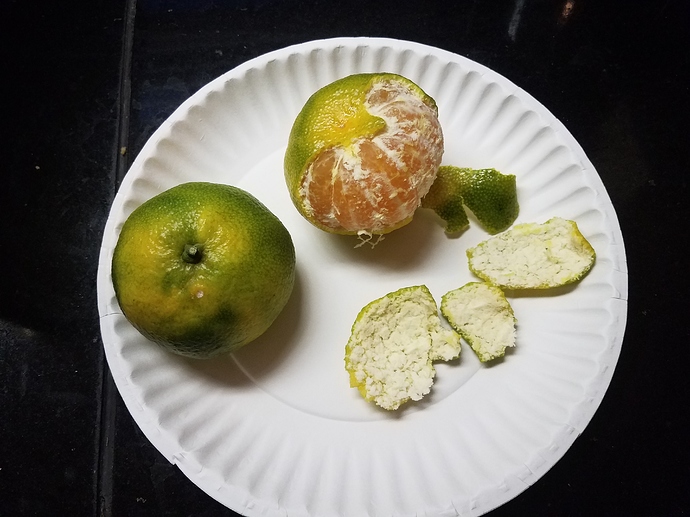