Can’t be sure but Kaffir limes and others papeda are Zone 8 fruits.

Re: “kaffir”, I’ve heard that “Makrut” is the politically correct name now. Better than kafir/kufr.

I do not mean to digress. For those who do not know, Kaffir is a profoundly offensive term to call an African man in South Africa. I did not know this until about a year ago.

The word Makrut is often used instead. It pronounces “ma-kroot”.

I went by the tree in north Birmingham Alabama today and was given permission to grab a few mature fruit. The smell was similar to trifoliate orange though the fruit was the size, shape, and color of a ripe orange about 2 1/2 inches diameter. Flavor was distinctly bitter with the sharp flavor of a grapefruit. Each fruit had about 10 seed. The fruit had the sticky resin typical of trifoliate orange. The tree was not covered in spines, however, the tips of the limbs were distinctly sharp. From the look of the tree, I suspect it was damaged by the 22 degree weather we had in mid November. The tree had a very heavy crop of fruit this year. Based on the combination of characteristics including cold tolerance, bitter grapefruit flavor, and tree form, I think this is most likely a citrumelo or from very similar breeding. I have about 50 seed which will be planted tomorrow. I figure the resulting seedlings have potential either for fruit or as rootstock. I am aware of the tendency of citrus to produce apomictic seedlings.

This makes sense. I was surprised when you said there was an “orange” tree in AL. Here in 9B we grow Washington Navel, and I know they don’t do well below 26° or so.

John of Lake Jackson, TX with over 100 citrus varieties in his back yard and a citrus hybridizer say:
Well you know how to stir the pot with your cold hardy citrus web site. Ha Ha But it is true. I gave up long ago with the cold hardy stuff and just decided I want good tasting stuff. On that note I would go easy on ordering a lot of indio mandarinquat. It is more an ornamental than something I would like to eat a lot of. We dilute it with other fruits in a fruit salad. I have talked to Dr. Brown ( Dr Brown is a citrus hybridizer who has been making crosses for 50 years ) and he told me that even with the first cross with trifoliate the cold hardness drops significantly and f2 and f3 away from trifoliate make the tree even more tender. The other problem is you can not use trifoliate as the mother because it does not produce hybrids. (There are claims that there is a zygotic producing trifoliate, but I don’t know who has it.)

@mrtexas
Do you know a thing about , Dragon lime ?
Specifically , how much cold it can handle ?

I know the finder of dragon lime, Bonnie Childers of Lumberton,TX. It is a citrange and should be quite cold hardy. I used to grow out thousands of flying dragon seedlings every year. On occasion I would get a “dragon lime” which is an unknown hybrid of flying dragon and some edible citrus. IMHO dragon lime is inedible. It is the size/shape/taste of other citranges. I would also occasionally get a tiny dragon seedling.

Dragon lime has much more contorted branches and limbs than flying dragon trifoliate. Fruit is like other citranges.

The dragon lime I have tastes good,( from Stan)
Just wonder how hardy ?
Do you know what temp. It has endured?

Haven’t had a citrus low temperature here near Houston since 1989. “Cold hardy” citrus hard to find in the area. Most of the people who made the crosses are dead now, an older generation. Can easily grow navel oranges and grapefruit here now. In 1989 we had 10F and frozen for 3 days thereby killing nearly all unprotected citrus including the rootstocks. I lost my large satsuma and kumquat trees. Citrus on trifoliate rootstock not available commercially anymore, all are on fast growing citrange. Didn’t plant citrus again until 2000. I wonder the gene line of your “dragon lime.” I sold a dragon lime seedling to Tom McClendon in St Marys Georgia many years ago. Don’t know if Bonnie Childers ever sent anyone budwood. Tom wrote this pamphlet. http://neo6601.free.fr/Pdf%20-%20Doc/Hardy%20Citrus.pdf

I think that the only way a truly cold hardy citrus would ever exist is with a very long ongoing hybridization project, finding citrus plants that could change the timing of fruiting, of dormancy, the timing of coming out of dormancy, finding citrus plants with cold resistant wood and cold resistant roots and so on, then hybridizing them together, to gain the cold hardiness, then would come the hybridization to make the fruit as desired.

I don’t believe most citrus (at least more warm climate citrus) ever go into a true “dormancy” I know all mine produce flowers and foliage year round.

I don’t believe most citrus (at least more warm climate citrus) ever go into a true “dormancy” I know all mine produce flowers and foliage year round.

There are plenty of citrus that people pay no attention to because the fruit is not desirable, or for other reasons. DNA mutations can do some odd things, also the climate of origin does not always mean anything. Malta a place that never hits freezing temperatures for more than a few minutes, some of the most cold hardy figs come from there. University hybridization projects often studies over 1,000 varieties of one type of plant. I doubt that a person like you or me could manage to find such a thing.

It would be nice for some of our chillier neighbors to find a true edible cold hardy citrus.

Maybe if some university, in lets say the state of New York were to plant enough lets say manderine orange seeds outside, maybe some of them could gain a DNA mutation(s) that adds strong cold hardiness. That’s how plants often gain disease resistances.

A similar paradigm played out with apricot with several thousand seedlings planted and 3 or 4 found to be cold hardy. Citrus will be a different concern given the genetics involved. I suspect the next 30 years will see some work done in cold climates and there will eventually be edible citrus at least through the southern half of the U.S.

Citrus on trifoliate orange root stock does have bark stop slipping after a couple cold fronts ni the fall. BTW trifoliate orange is the most cold hardy citrus although fruit is awful. Trifoliate loses it’s leaves in the winter and can be grown north of the Mason Dixon line. The problem with trifoliate crosses is that the awful trifoliate taste lingers as the cold hardiness diminishes. 1/4 trifoliate crosses like thomasville citrangequat tastes awful even though it is relatively cold hardy. I can still remember the thomasville tree I brought home from a plant sale. It had fruit on it and when I tasted the fruit it was so bad I thought I had been swindled. Why would the master gardeners sell such a tree with inedible fruit on it at a fruit tree sale? Citrange is next in cold hardiness which is a cross of trifoliate and round orange. Swingle is also hardy which is trifoliate crossed with grapefruit. Edible citrus on either of those two as root stock is not cold hardy as citrange and swingle both have hybrid vigor. Making crosses for cold hardiness has been going on for 100+ years and still nothing. In the 60s and 70s there was a bunch of interest in making “cold hardy” citrus crosses in the Houston area. Since 1989 though no citrus killing freezes here. The most cold hardy desert quality citrus are satsuma and kumquat. They can survive several hours of 20F or less freezes without harm if preceded by cool weather. A month of 80F and a night of 20F can cause freeze damage however.

Push the Zone by David the Good (which is an excellent read if you want to grow citrus in less-than-ideal zones btw) had an interesting anecdote about this. While he lived in Tennesse he learned that someone allegedly had a cold-tolerant lemon, and that they had apparently gotten it by planting tons of seeds for years until a seedling survived. He got a seedling from it from someone who knew the guy, but it perished in the Nashville floods. David left the state in a huff not long after because the local HOA rubbed him the wrong way, and he forgot about the lemon until much later. Assuming it survived the flood better than its seedling did and isn’t a misidentified Trifoliate there may be a truly hardy lemon in Zone 7 Tennessee. This is all an anecdote of an anecdote, so take it with a grain of salt, but at the very least it’s a neat story that has inspired me to try something similar with citrus that are already fairly hardy. You never know what kind of interesting mutations plants can show!

Here are the Triofoliate poncitrus orange seeds are growing. Thanks to Lord Kiwi @lordkiwi . Hopefully they will put on some size then going to tge ground in late May for Z5 trial. 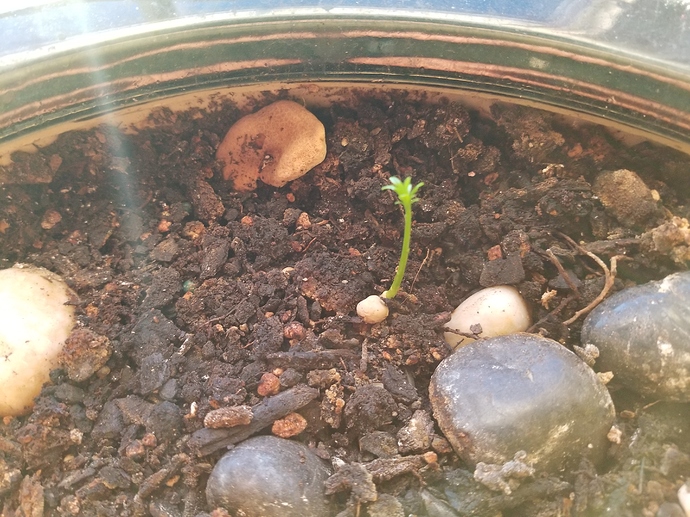