Altoona a saved pear from Iowa

Forgot about this stool bed it’s full of some of my hardest pears to graft. A backup of Altoona is growing there in the middle of the stool bed I planned to move the next year. These pears need an interstem of my small yellow pear for the graft to work. There is no way to properly graft them but they produce very quickly. Sometimes what seems like a curse is actually a blessing. These and other pears could change everything. 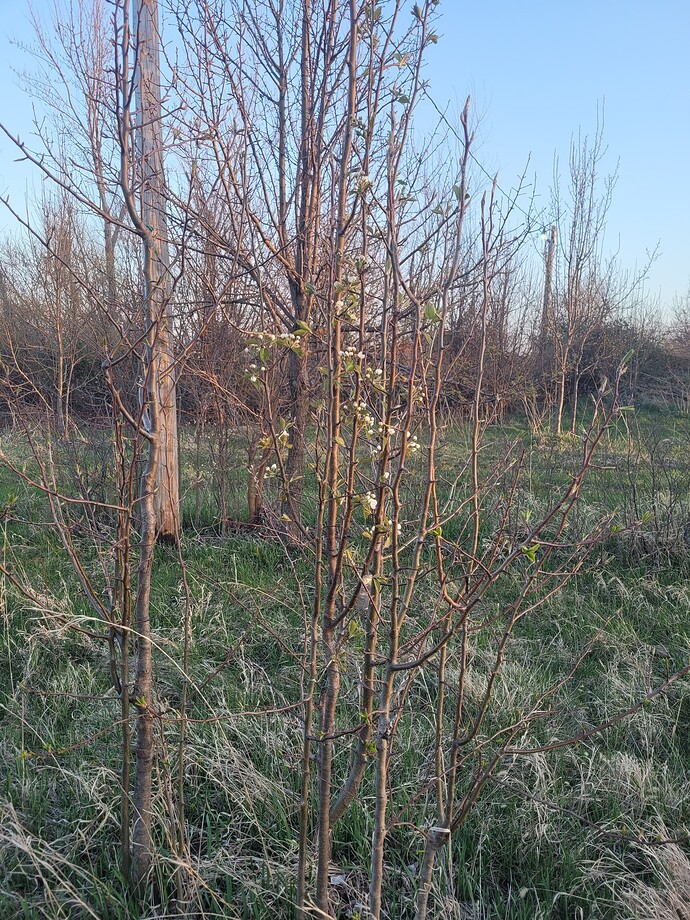 The old stool bed with those pencils in it in this old thread are now that Flowering Altoona. Making a pear stoolbed for propagating rootstocks . These are 10 footers+ I better move them soon and leave that altoona there. Was messing around using interstems and different combos there which as you can see worked fine. Look how small they were. One of those 3 or 4" is that Altoona pear. That’s terrible soil as well. 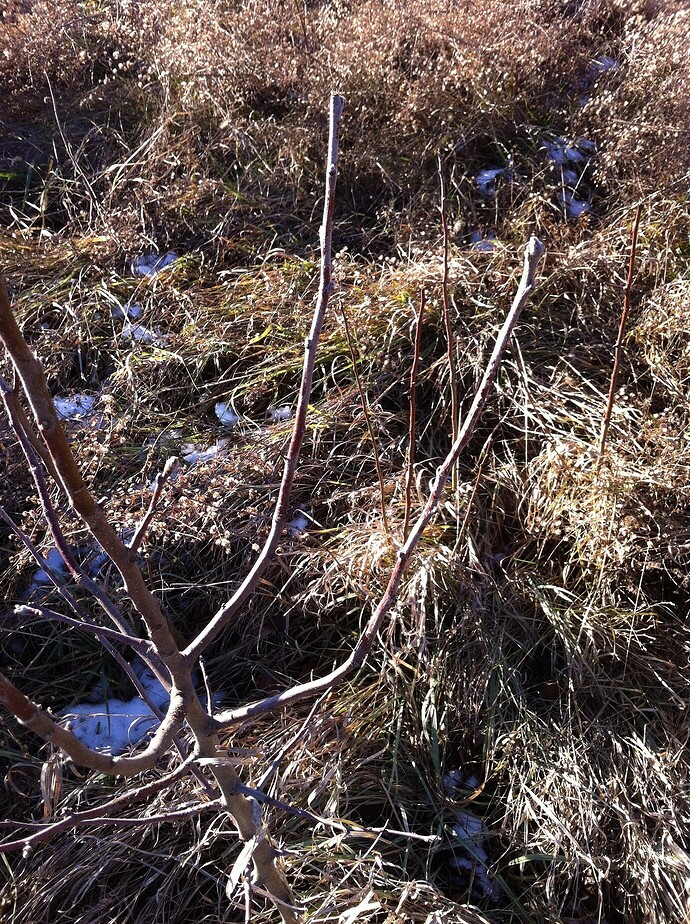 Neglected and forgotten Altoona a saved pear from Iowa has been growing in this old stool bed since I added it there using an interstem with my small yellow pear. It was strictly a backup graft in case others failed or were damaged. 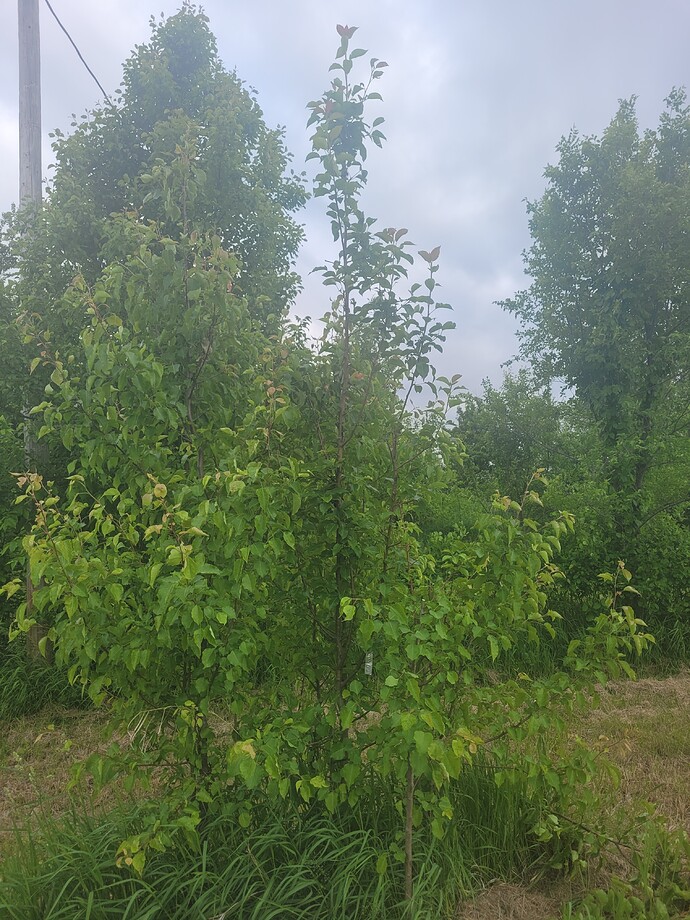 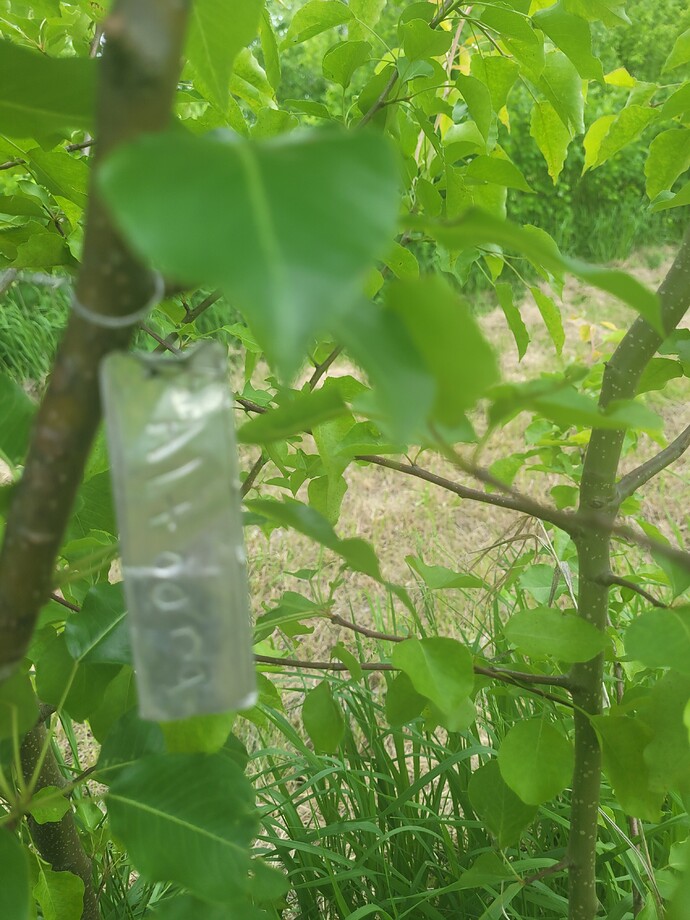 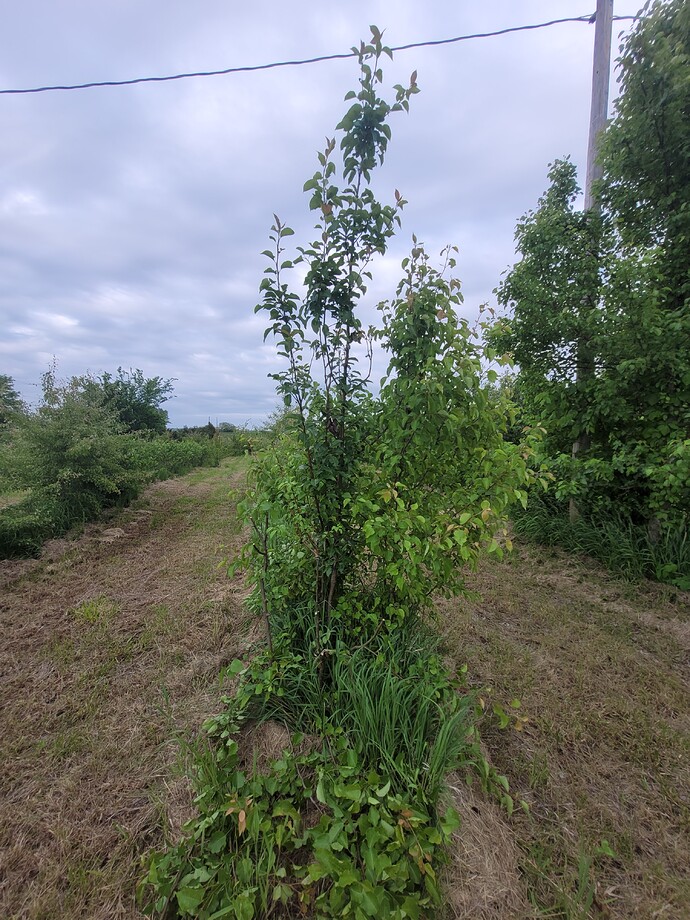 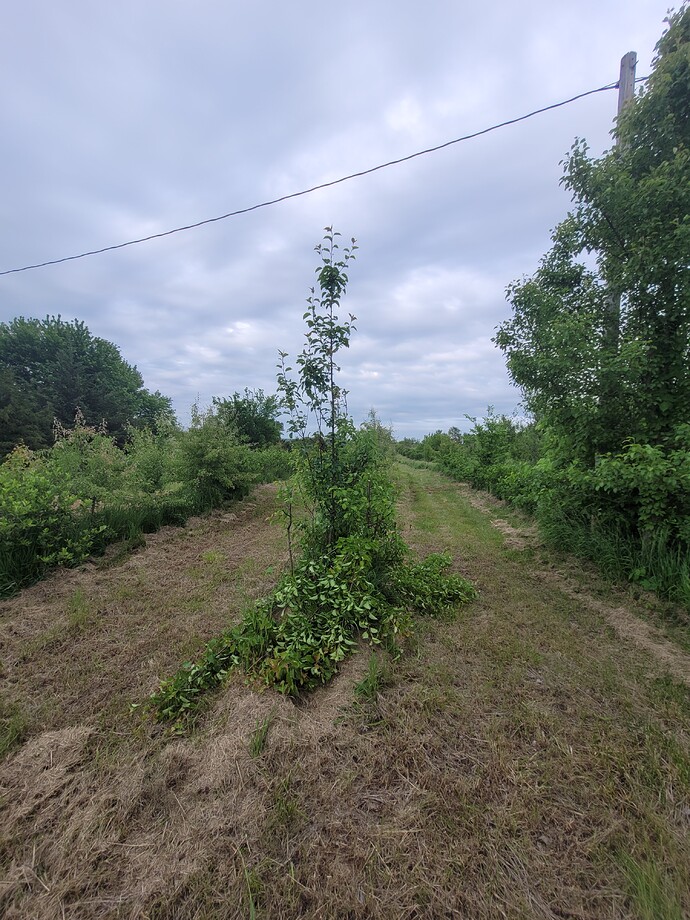 Someone likely wants to know what the fruit look like but you will need to look closely below to see them. 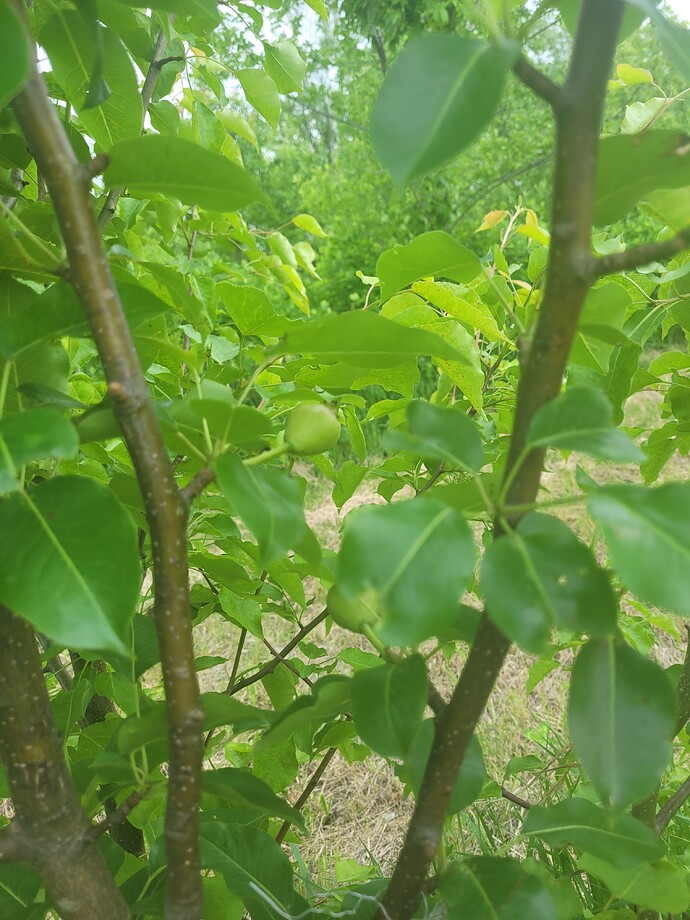 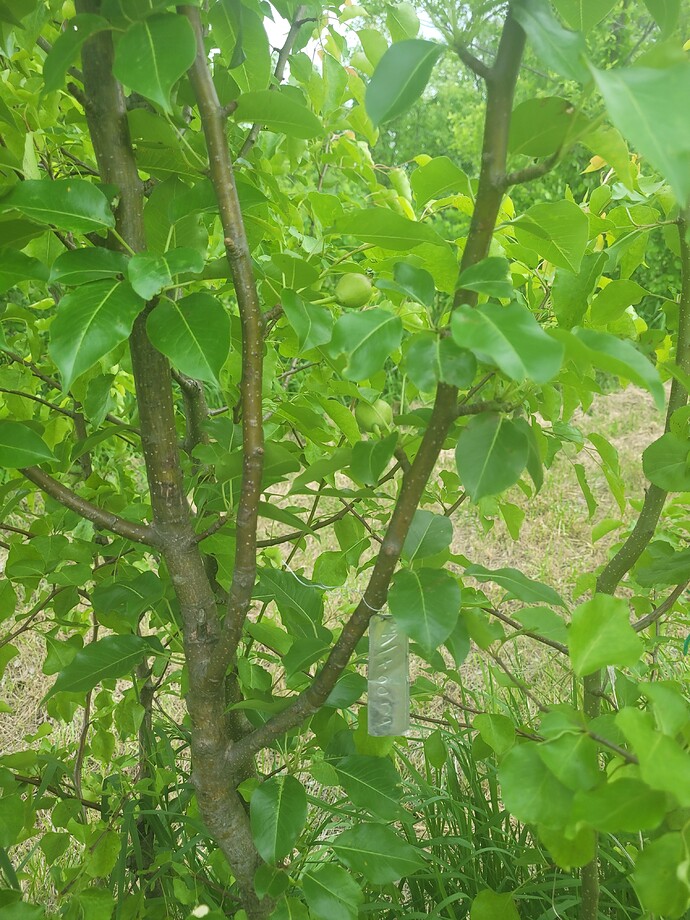 These pears were rescued by @Chikn as he wanted to preserve this old variety.
https://growingfruit.org/t/saved-a-pear/9868

@alanmercieca how is your altoona coming along? The nice thing about dispersing scions is we have backups. You had located pictures of the original tree below https://growingfruit.org/t/saved-a-pear/9870 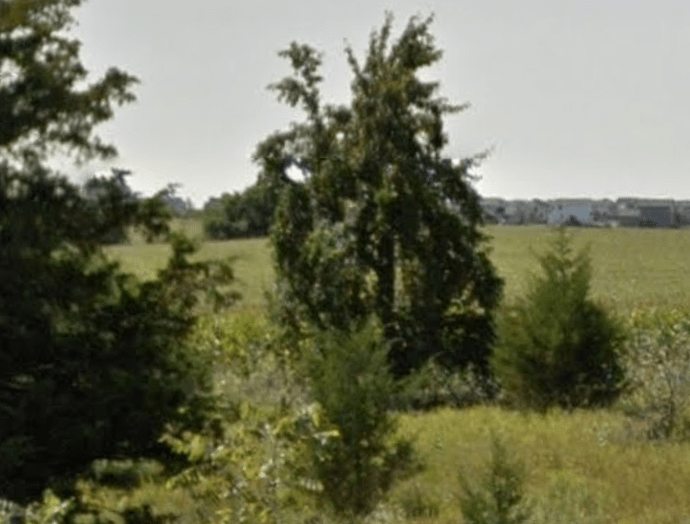 Still we have many unanswered questions about this pear. What is it really? Is it unique? How did it get there? Is it a seedling or forgotten variety? It ripens in October in Iowa so we have some vague clues but that’s not much to go on. Maybe after this year i can invite @39thparallel over to taste this pear with me this fall and if the results are good perhaps next year he can offer this old variety to everyone. It’s an interesting story we would like to know more about. Who was the woman and her family who owned that old farm? When I see an ancient pear like that it speaks volumes. That tree says there was once a prosperous farm there. The people lived off the pear made from no more than sunshine and rain. The tree showed no signs of illness. Like most pears it outlasted its owners. Love the ancient pears myself like the ones in this thread Napoleon’s army planted pear trees fact or fiction? . Like Mike at @39thparallel orchard we share the desire to rescue forgotten fruits. We have some extremely rare pears. In addition Mike is a rare apple collector. I find his collection fascinating.

Sadly, I only tried to root the scion I was given, I did not try grafting it because I did not have usable root stock at the time. One scion looked like it survived the rooting process after looking dead, then suddenly it just died.

The rootstock is incompatible with almost everything. My small yellow pear can bridge almost any variety together. The altoona variety readily grafts to nearly anything. Have a backup graft existing and this backup tree we are good we have scion wood thankfully.

I look forward to getting some scion wood of it from you one day.

Yes and I need to get this pear in a nurseries hands. This should be in orchards. 39thparallel can look at this variety or it will wind up lost to time. We need to send some scions to the USDA for preservation. Was trying to get the entire story with photos before we do that.

If it winds up being cold hardy enough, then sharing with them Pears - Fedco Trees, and other nurseries in new England might be a good idea.

Think we should name it after @Chikn aka Phil Meyer maybe call it the Meyer Pear for the guy who saved it.