I remember reading a suggestion to spray leaf litter with ammonia to hasten its breakdown over winter to reduce available vectors for overwintering bacteria, insects and fungi.

Of course, it is preferable to remove the leaf litter but that is not always an viable option to some of us.

Has anyone else heard of this?

Mike, I don’t know about ammonia (but don’t at all doubt it, since it contains a lot of N).

In general N will break down leaf litter faster. I’ve always read urea is a good choice for that. It’s a cheap source of N.

Unrelated, I sprayed N on part of my orchard this fall, trying things to increase fruit bud hardiness and delay bloom. I sprayed about 80 trees to see what would happen. I used urea. Bagged urea is expensive (about 50 cents per pound). But you can buy small amounts of urea. Bulk N (ammonium nitrate) is less than half the price (but a little less N. )

I don’t know that farmers have access to large amounts of ammonia, but urea and ammonium nitrate are stocked at elevators.

Yes nitrogen breaks down organic matter faster. I know this for several reasons related to farming in the Kansas. Frequently farmers use their organic material up in the soil by using to much N. As your aware ammonia turns to nitrogen. Technically ammonia turns to nitrites and then nitrates. This is why frequently people say don’t put wood chips in your soil because it robs the plants of all available nitrogen because it’s being used to break down the wood chips instead of feeding the plants. Anhydrous is typically applied here https://www.extension.umn.edu/agriculture/nutrient-management/nitrogen/using-anhydrous-ammonia-safely-on-the-farm/ though we usually use pellet type fertilizer because it’s safer.

Absolutely right Clark. Anhydrous is the main source of N in the Midwest. And you are right to correct me.

It just totally left my thought because of use of it’s use in row crops with tillage equip. Not orchards. I was totally zeroed in on dry fertilizer.

Here’s a funny thought for you. Can you imagine Mes111 pulling an anhydrous tank in his home orchard? Making of a YouTube video?

I know that there is a big tradeoff between organic matter recycled from mulching leaf litter back into the soil and it providing a disease vector. Still lots of your soil’s nutrients end up in the leaf litter. If you take the leaves away, you in effect deplete the soil. I use my lawnmower to chop up leaves and in our relatively warm humid south Georgia winters they are pretty much decomposed by spring. God bless.

Anhydrous in an orchard would be pretty funny and very hard to picture! Lol

Hey I have a Tonka truck that I can use before my grandson’s get at it. Can you send me the modification specs I will need to make.

What do you think?

I’d love to be able to do the shred and mulch but I have row trees and the ground underneath is covered in wood chip nuggets and the chop n’ go mowers would not work.

The rough surface catches some leaf litter and I was thinking of the ammonia/urea spray to try “treating in place” .

Its not a major thing but I am always trying to figure out ways to make the process easier on my aging physical plant.

@Richard , with his recent project is my inspiration… and comfort because I know from the start that I won’t be able to do what he did … but that’s ok… we can all dream

I remember reading a suggestion to spray leaf litter with ammonia to hasten its breakdown over winter to reduce available vectors for overwintering bacteria, insects and fungi.

For that task, I’d choose copper ammonium. Out here in the west it’s sold over the counter as “Liqui-Cop”. A pint or quart is sufficient for most homeowners. For an orchard you might prefer the 1 or 2.5 gallon size.

If you do want to shred and mulch, there are attachments you can buy for leaf blowers that will “suck and shred” instead of “blow”. Just FYI.

Thought of that but it would suck up the wood nuggets as well and spread them all over . My orchard layout is a little different and I don’t want to spread leaves all over. See below 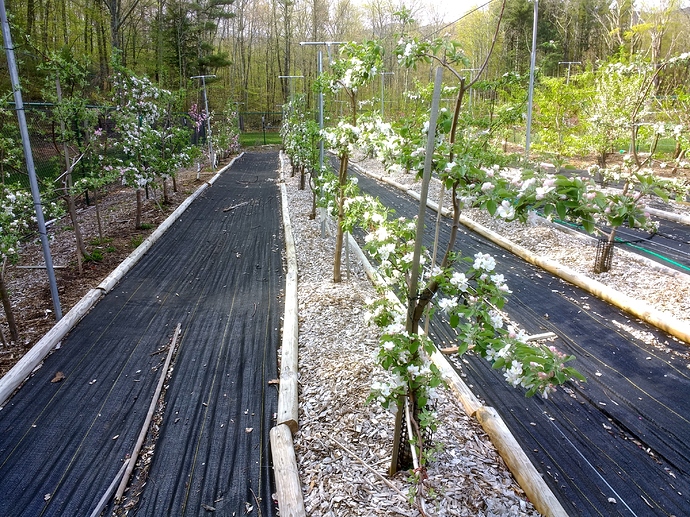 U of Mass suggests 40 lbs. of urea/acre to speed degradation of apple leaves. (about 18 lbs. of actual N per acre). That’s not much. A 50 lb. bag should cost about 25 bucks. It mixes easily with water.

One thing to consider about copper ammonium, is that unless your soil is deficient, it will add unnecessary copper. This probably won’t be an issue if you use it sparingly, but copper has been known to buildup from repeated sprays. Some orchards have reached toxic levels of copper to fruit trees, from repeated Bordeaux sprays (probably takes decades of applications to reach that level).

“Be aware that repeated annual use of copper products over many seasons can result in a buildup of copper in the soil, which eventually can become toxic to soil organisms, and if it moves into waterways, can harm some aquatic species”

Saying that, I still use some copper, but limit it only as a fungicide, and use it very sparingly.

Southern Ag also has that active ingredient in a “Liquid Copper” fungicide, which is available on the internet.

One thing to consider about copper ammonium

Another thing to consider about copper ammonium … for degradation of leaves the dosage is far less than Urea. Further, if you’re going to spray your trees anyway – then spray both and you’re done.

Another thing to consider about copper ammonium … for degradation of leaves the dosage is far less than Urea. Further, if you’re going to spray your trees anyway – then spray both and you’re done.

One other thing of that may be worthy of consideration -

We know copper is a fungicide and bactericide which may inhibit deterioration. Copper is one of the preservatives in treated lumber. It may well have a similar effect when sprayed on leaf litter. I don’t know if the nitrogen in the copper ammonium would be enough to subjugate the preservative effect of the copper.

I’m not sure why it would require less copper ammonium than urea. Could you elaborate?

I just did a quick and dirty calculation of copper diammonium diacetate (the active ingredient in Liqui Cop) and come up with about 13%N. Given that the active ingredient (copper diammonium diacetate) is only 27% in Liqui Cop, that would only leave about 3.5% N in the concentrate bottle. If it were further diluted with water for a spray mix. The amount of nitrogen would be very negligible.

I’ve not seen any recommendations from extension to use copper ammonium for leaf degradation, but perhaps I’ve missed that.

Here is an option if you want to just shred the leaves. It is about $99.00 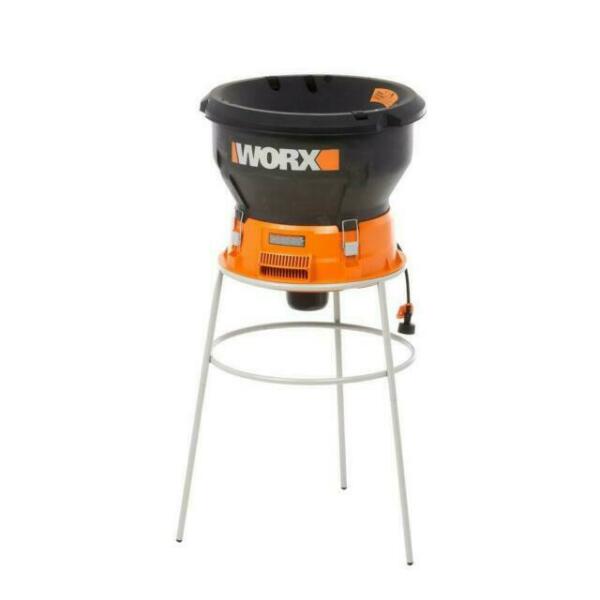 Find many great new & used options and get the best deals for WORX WG430 Electric Leaf Mulcher 13 Amp at the best online prices at eBay! Free shipping for many products!

Is this what you are talking about? And… would this 1 lb. bag be enough for what I am thinking about?

In RE: ammonium Nitrate I found this … But what do they mean hen they say “prilled” or “non-prilled” ?

And most importantly.… Any good sources for this stuff for someone who is nnot using so much.
Thanx

I’m on my phone, so for some reason I couldn’t open the second link.

The first link is super expensive for urea. It’s like $350 for 50 lbs…
Don’t buy that. You can buy a ton of urea for about that (literally 2000 lbs. for about that price if buying unbagged).

One pound of urea really won’t cover much ground. Only about 1000 sqft.

Urea is one of the most economical sources of N (which is what breaks down the leaves) but I would encourage you to go ahead and get a 50 lb bag.

If you don’t use much, you’ll at least have plenty of cheap N left over to use in future years, for leaf litter decay, possible foliar sprays, or top dressing soil (before rain) to give your trees/plants a boost. Heck some farmers use a little urea for ice melt on a walkway.

If you don’t have any elevators around, I checked on Amazon and they have a 50# bag for around 50 bucks (free shipping). This is double the price of an elevator, but still cheap N.