I was reviewing some old threads we had on GW last year and I realized that all the conversations centered around the concentration of the mixture and seemed to settle somewhere between .4 and .6 TBS per gallon up to 2 or 3 times a week.

But what I don’t see is how many GALLONS of this mixture PER PLANT PER APPLICATION.

Additionally, since I don’t get to do this but once a week is increasing the concentration a viable option?

I am now talking about plants that are planted in the ground, not potted.

With regard to how much per plant - when given per gallon dosages, it is assumed that you will not over- or under-water so that the net dosage will be appropriate for the size of the plant.

That is not necessary at all and a single application in spring would be adequate. I’ve never fertilized any fruit plant throughout the season although some commercial growers do until mid-summer through fertigation.

Those specs must have been for potted plants because potting soil provides very little native N and does not hold onto nutrients like real soil.

It might be good to fertilize blueberries 2 or 3 times during the growing season, especially when you are establishing them but you certainly don’t need to do it on any more then a monthly schedule in actual soil.

I should also mention that there are several slow release fertilizers such as Osmocote that are excellent for blueberries and come in various nutrient ratios and release rates. If you want your blueberries to receive a steady release of N this would be the ticket for you.

Agree that potted and inground are very different. Even potted it’s only once per week enough to leach through the pot. I had one guy email me because he couldn’t get 5 gal of the mix into a small pot even applying it several times a day all week.

I’d say inground one TBS in 5 gal once a month if you need more growth. Mixing it in water first does reduce the chances of burning the roots.

Only use AS if your soils pH is a little on the high side. Urea or organic is better if pH is 4.5 or below.

That is not necessary at all and a single application in spring would be adequate.

I would agree as a fertilizer, a single spring application could be adequate. But Ammon. Sulfate is commonly used for pH adjustment with Blueberries. So it was my assumption that lowering the pH was the context of the question.

If you guys remember, it was part of the back and forth that included Bamboo Rabbit ( who is now unfortunately MIA) and Charina the knowledgeable chemist who is also AWOL.

The discussion included the use of sulphuric acid to lower the ph of the irrigation water in order to lower the ph of alkaline soils ( vs using vinegar or the slower sulfur) . The AS part of the discussion was adding AS to the water to size up and get the blueberries to put on some vigorous growth to get them up to size and definitely included in ground plantings. The consensus was that salt buildup was less of a problem in ground that in containers.

My soil is alkaline and my well water is 7.4. I want to push my blueberries to grow up to size so I have been using both once a week with each plant getting about a gallon or two so a week.

So even more importantly:
Northern or southern blueberries?

The southern highbush, southern rabbiteye, and hybrids due very well at pH 5.8 - 6.2 which is easy to obtain with azalea food, etc. If fact with suitable nutrients they often due well up to pH 7.

As @fruitnut points out nearly all blueberries react poorly to large dosages of nitrogen in the nitrate form - so whatever you use should have nitrates as a minor or nonexistant component.

Most of the northern blueberries prefer pH in 4.8 to 5.2 range, although lowbush does best around 4.8 and bog blueberries are right there with lowbush cranberries at 4.5.

Now if you irrigate frequently then the pH of your irrigation water will “set” the pH of your soil over time. In this case doping your water with a pH adjustment makes sense. Otherwise a long term adjustment of the soil pH makes more sense.

If you want to treat you water, fine, but ammonium sulphate is not needed for that- the brutal rabbit (think Monty Python), as you know, used sulphuric acid.

It makes no sense to me to use ammonium sulphate to acidify well water. I think it should be used primarily as a fertilizer with acidifying being secondary.

Well waters are often alkaline. Mine is around 7 even though the soil tends to be about 5.8- just sharp enough for blueberries- at least with this and some other soils.

What is the pH of the soil your plants are in? Mulched plants don’t need all that much irrigation in the northeast- I only rarely give my established blueberries water- maybe after 6 or 7 rainless weeks. I haven’t had to water them in years.

I think you may be overly concerned about adjusting to your water and simply applying sulfur to the soil’s surface may be adequate to counter the gradual sweetening affect of your well water.

Incidentally I don’t think FN is correct in suggesting ever using nitrate for blueberries, no matter the pH. As I recall, I’ve often read that they can’t handle nitrate.

My soil tested out at 7.3 two years ago when I noticed that the blueberry leaves had that reddish look in summer AND they were not sizing up.

My plan was to acidify the water with sulpburic acid which is real easy for me and adding the AS to the acidified water until the plants grew to size.

I would suggest growing them in a mix of 50-50 peat moss and sand and forget about using your native soil. You can add some reasonably sour compost to help hold nutrients. If you grow them in raised beds the plants will likely thrive.

In the east, when you have that high of a pH it usually means your soil is laced with limestone. Hard to overcome that, if not impossible.

Incidentally I don’t think FN is correct in suggesting ever using nitrate for blueberries, no matter the pH. As I recall, I’ve often read that they can’t handle nitrate.

If you’re talking about me I’ve never intentionally recommended nitrate nitrogen for blueberry. Not sure where that’s coming from.

Urea or organic is better if pH is 4.5 or below.

You are correct FN. I misconstrued this statement not realizing you were talking about ammonium sulfate. I should have known you’d have the facts straight on that.

Our own well water here in Michigan has lots of lime and if used to water plants they tend to not grow and will turn yellow over time. I try not to use our water. I collect rain water.

I am guessing that this post has been laid to rest but I will chime in anyway. I use AS to fertilize my blues and get exceptional growth from a mixture of 1 Tblsp per 3 gallons of water. I water with this mix once a week after last frost until I get the growth I am looking for (approx. 6-8 weeks). I have been doing this for 2 years and am very pleased with the results. I also lower ph to 5 every watering. Water my pots till it runs out of the bottom about 3-4 gallons each and about 5 gallons for the ones in the ground. 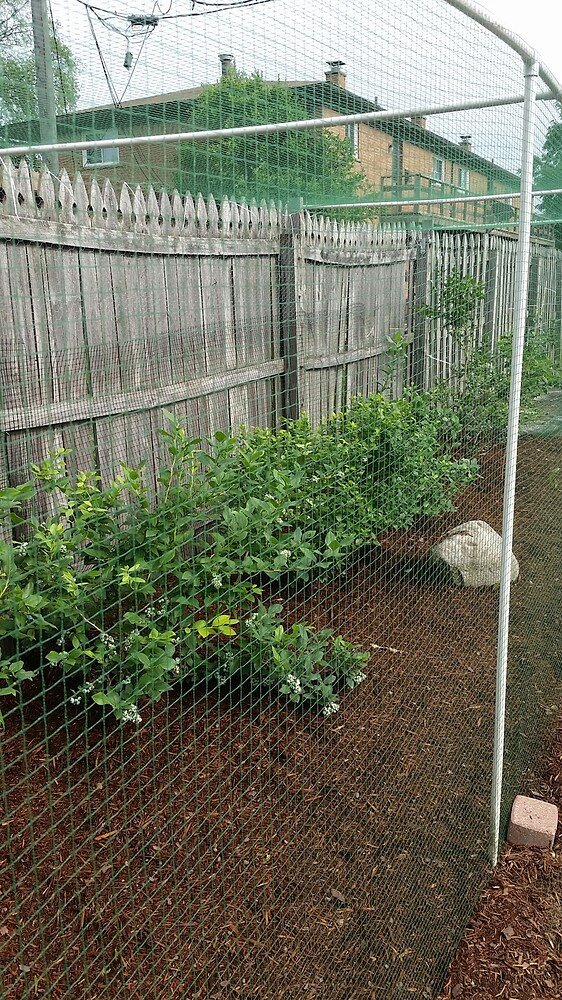 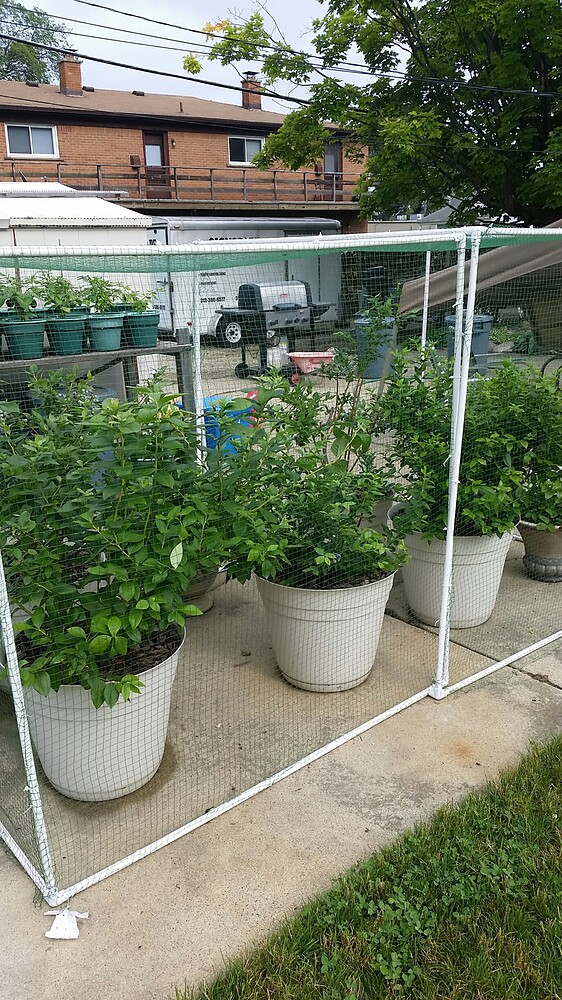 Thanks. This is the first year I actually got berries to myself. I think I have definitely won the war against the birds.

I have picked a couple gallons already, birds have got zero. Also put up a 70’ net on my brambles.

Thanx for the input