Antietam Blush, Maryland's first native-grown apple variety, is on its way, but

Interesting article about a new Maryland apple. Good quotes from some of the bigger central MD apple growers too. Looking forward to eating some of these with Bud Black this fall. 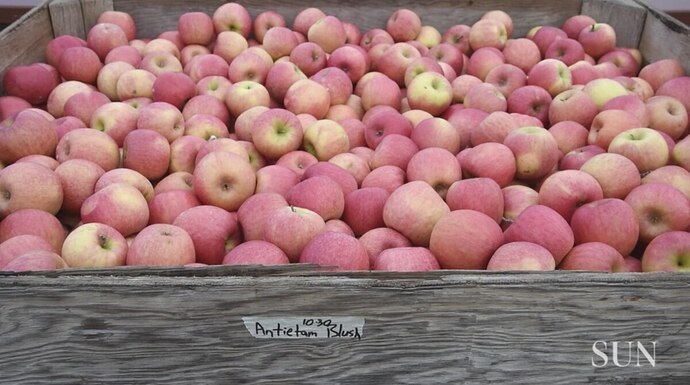 Antietam Blush: An apple bred for Maryland is on its way, but not in a hurry

Antietam Blush is the first apple bred specifically for Maryland, patented by the University of Maryland, College Park. But there are still many years to go before consumers can take a bite.

I was wondering how I missed this article in the printed Sun which I read every day… it finally showed up this morning in print!

Good to hear they are doing some apple breeding. Honeycrisp has been a real mess for Maryland, its bad here. I only wish they had given it a different name, Antietam Blush makes me think Blood Bath Blush … Antietam was a bad battle. How about Shaeffer or Hogan, popular governors? That could get them flying off the shelves

I like place-names myself. I wish more fruits had them. Naming a red apple after Antietam definitely makes you go “hmmmm” though…

How about Shaeffer or Hogan , popular governors?

Even popular governors are politicians. And in today’s divisive environment they probably don’t want to completely turn off half their customer base (and even irk some of the other half). They would do better naming it after a disease…

Without a winter of extended cold in Maryland, those trees wouldn’t blossom in the spring. They require an extended period of uninterrupted dormancy, known in the industry as minimum chilling hours.

The article mentions Maryland’s summer heat as a problem, which makes sense. But it also says that Maryland doesn’t get enough chill hours, which seems a bit strange. I didn’t think that MD got much less than I would and I automatically assume I have enough to grow anything I’ve ever seen. It is more winter hardiness which is the issue.

I don’t think the writer understood fully what they were told and/or read. Chilling is never a problem in Maryland.

We are still a considered a high-chill area. I don’t think there is really anything to worry about, even in mild winters here. Our average winter temps are fairly low for being zone 7.

Average high/low in Jan of 43/22 means plenty of chill hours.

Yeah. If this were say, Atlanta, where lack of chill can be an issue at least in mild winters, then it would make sense.

Bad name, I hope to try it, though.

Chill hours are not an issue here. What I find interesting about this map, is that the far northern areas actually get fewer chilling hours, because they spend a lot of time below freezing. Sub 32° F temperatures don’t “count”. However, in practice, a sunny day that is below freezing, may actually accrue chilling hours, since the sun will warm the surface temperatures of the buds and branches above 32. That would also suggest that perhaps a sunny 42 degree day won’t accumulate any chill hours, despite appropriate air temps, since the branches would be warmed to 55 or 60.

I hope it does not take too long to market as I really would like to have some of these planted in the ground. Being on the lower eastern shore we are always humid making organic apple growing difficult. If anyone hears that these are available please post back.