My canker battle with my two year old late santa rosa came to an end yesterday. I wasnt able to contain it so removed the tree to avoid spreading it further. I love plums and was wondering what the best tasting varieties are? Would love to find one that has some immunity to canker if thats even possible?

I can’t vouch for the quality of these plums, but Auburn University has released a series of plums that are supposed to have pretty good resistance to canker.

If you look at table 1 in the link below you will see that where Santa Rosa suffered 81-100% infection with canker (a score of 5 on their 0-5 scale) their line of plums suffered 0% infection (score of 0).

Try AU Rubrum. It’s the best plum that I’ve ever grown, and has been disease
free for me, and I might add, so has Santa Rosa.

Thanks for the feedback. How does emerald beaut stack up? Is it a canker magnet as well?

rayrose how does the au rubrum compare to methley? I got a boat load of plums from my methley this year and they rasted awesome. This variety sounds like a winner.

Try AU Rubrum. It’s the best plum that I’ve ever grown, and has been diseasefree for me

Wow this make me appreciate planting one in 2015. My one and only fruit from it was great to me. As I remember my other choices were not so good Producer and Methley. I know that Methley is disease prone but a good pollinator. If I eliminate the Methley do you have a disease resistant alternative pollinator. Thanks, Bill

In the South, Methley is considered to be a junk plum, not worth growing.
I wasted 5 years on mine, before I got rid of it. I know others that have had the same experience, so I know it wasn’t just me. You must be in a more Northerly climate.to get those results.
I just planted Emerald Beaut, so I can’t comment on it. Maybe Fruitnut
will chime in . He grows it well.

I have Santa Rosa planted next to mine. Although they are both self
fruitful, they cross pollinate each other, and the fruit set on both trees
is TREMENDOUS. I don’t thin either tree, and still get big plums. I highly recommend this combination. 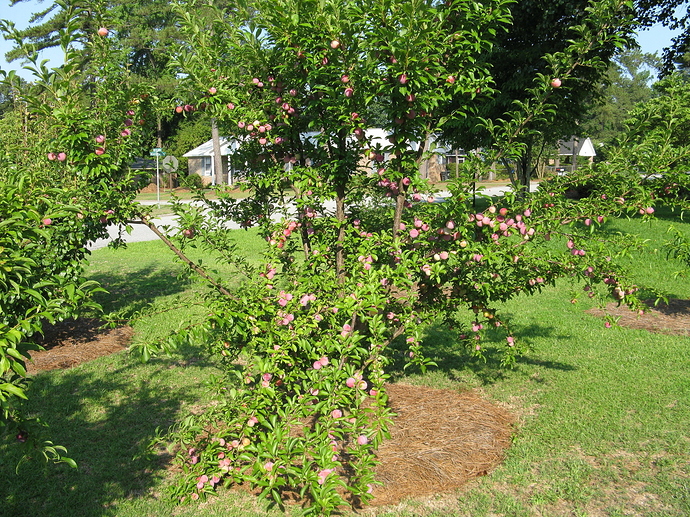 The AU Rosa looks like it would be a great selection.

The last visit I made to Petals they had several of the AU varieties. Many of these varieties were created during the owners time as a professor at Auburn. Just a little pitch for my college and a great person Dr Powell. Most of what they have is not shown in the online catalog and if you are nearby I would suggest calling ahead to verify your choices.

How does emerald beaut stack up? Is it a canker magnet as well?

In a word, yes. (Edit: I was not paying enough attention, it is a knot magnet not a canker magnet.)

Not all the AU plums are disease resistant - AU Roadside has proved to be highly knot-prone for me.

Edit: I should have mentioned above I have little problem with canker on any plum, only cherries have bad canker issues. The most care-free plum I have is probably Lavinia, it never gets any wood diseases and produces a very consistent load of rot-resistant plums.

Not to belittle your alma mater, nor Dr. Powell, but I have grown
many of these varieties and the only one that I would recommend
is Rubrum. The others did not work for me.

The most care-free plum I have is probably Lavinia, it never gets any wood diseases and produces a very consistent load of rot-resistant plums.

Good to get that information. I have a cherry plum that is very susceptible to brown rot and was planning on cutting it back. I’ll graft Lavinia.

When I think of plum, canker is not a major concern. It’s black knot that is a killer.