Any expert cooks have experience with Pemmican?

Well, I have made venison jerky but it was so yummy that I have ate it all up. I am tired of venison stew. And I can never seem to fry the venison to my satisfaction as to taste. Still have plenty of frozen venison in the freezer. So now I am ready to try something new.

Been reading about things to do with venison off of google and came across Pemmican. Have decided to try to make some with a recipe that calls for 4 cups of venison, 3 cups of dried blueberries, 2 cups of rendered fat, and unsalted nuts and about 1 shot of honey http://www.wildernesscollege.com/pemmican-recipes.html. So not being intelligent as to the lingo of expert cooks (which I am not), I have some questions.

How do I go about obtaining 3 cups of dried blueberries? What exactly is rendered fat? Should the fat be measured before or after it has been rendered? What exactly is a shot of honey? Any advice would be much appreciated.

Not sure where to find dried blueberries, (and they’ll be expensive when you do find them)

Rendered fat is simply the fat that is left after meat scraps, bones, and so on are gently heated to melt the fat, which is then allowed to solidify and lifted off the top of the stuff below; it’s pretty much what you’ll find on the top of a pot roast after it has been cooked and refrigerated. Commerical lard, beef suet, or even butter should do fine.

A shot of honey is a couple of tablespoons, more or less- roughly a fluid ounce. You’d definitely not want to go too much more than that. A glug would be way too sweet, but you’re going to need at least some sweet to make the stuff palatable.

Remember, the people who depended on this stuff just used what they had and did what they could to get the job done. There are lots of other dried fruits than blueberries (currants, serviceberry, for example) that I am sure could be used.

Disclaimer: I’m no expert cook and have never made pemmican, but I’ve done a lot of baking and read and adjusted lots of recipes. Just dive in and do it and have fun.

A cool vid on it https://youtu.be/x_vLuMobHCI

If they don’t sell dried blueberries at your local grocery you can order online, Amazon had a bunch of options.

Let us know how it goes! I usually just use venison in crockpot chili and that’s delicious too!

Depending what you have left venison corns very well too.

Pemmican just doesnt even sound good; fruit and dried meat in a fat paste does nothing for me, i wont even add fruit to pates or rilletes, which might be as close as anything modern…just not convinced it would be better than venison made into jerky, or grilled, or stewed, or smoked, or ground up and used in beef or lamb sausage recipes, like mergez. Mergez is excellent, and you can make any cooking sausage as a free-form patty if you lack a stuffer.

If you do make pemmican though, let us know how it turns out!

Finally got around to baking some venison for jerky for the use in fixing up some pemmican! Baked it in conventional oven at the lowest temperature for 10 hours. 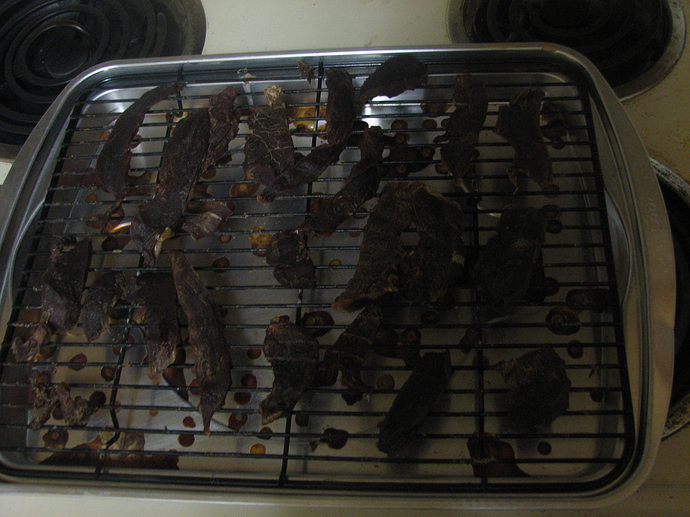 Decided to use dried cherries that I found at a local Krogers. Threw in some nuts. Found some soup bones that I melted the fat off of in a crock pot. After cooking on low for 4 hours, I found that I didn’t not have quite enough, so per @marknmt suggestion I added two sticks of butter. Ground the jerky in a food processor to a coarse mixture then ground it up again to a powder like mix in a coffee grinder. Also, ground the dried cherries and nuts in the coffee grinder to a not as fine a mixture. Then mixed everything up in a large bowl while adding three tablespoons of honey. 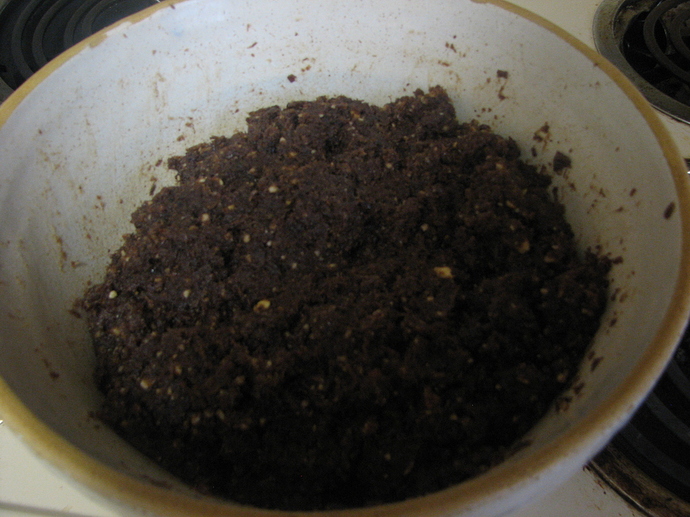 Then I just sort of mashed it into a baking dish and cut it up into bars with a plastic knife. Ended up with about twenty 2.5" x 2" or so bars. Actually it is quite tasty, although I prefer the taste of the jerky that I had previously. That may have more to do with the spice kit that I used with the jerky. This stuff doesn’t get between my teeth nearly as much though. Although I have been keeping it in the frig wrapped in plastic wrap and Reynolds wrap, I am sure that is not necessary. For survival food, I can see why the pioneers used it. I could recommend it for something like a camping trip! 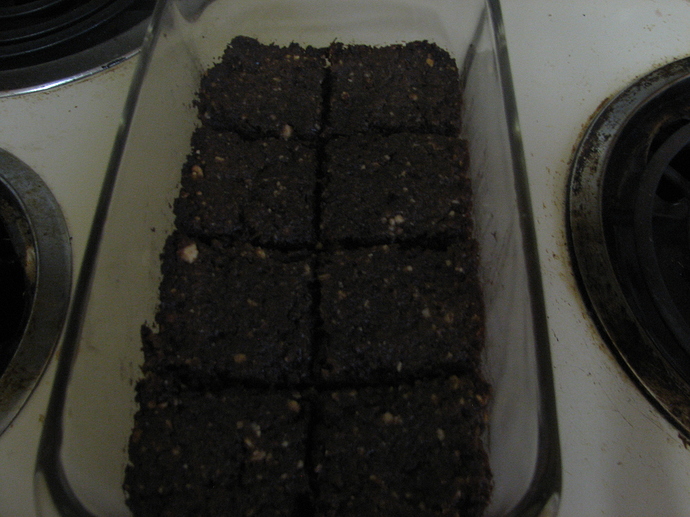 Any specific recipe you use for your crock pot venison chili?

Kudos!
It has been said that pemmican is the only single food that can sustain a man indefinitely. It was traditionally kept in bags made from stomachs or hide and would keep “indefinitely” (supposedly bags of pemmican were found in edible state in caves in the SW after hundreds of years). The fat content (typically 50/50 jerky/fat) would make it a valuable high-energy trail food. Have you tried frying it with potatoes and onions?

No, I have not tried frying it with potatoes and onions. Not sure how that would work. Have tried baking it to dry it out some but that really did not do anything noticeable to it. For now I believe I will just save the pemmican in case of a prolonged power outage. It sure is filling. A little bit goes a long way.

In the future, I would like to get into sausage making with the venison. Really like summer sausage. Just don’t have a meat grinder. Can’t make my my mind up on as to obtain one that is electrical powered or manual operated. And the stuffing stuff.

Really interesting post that @markalbob wrote about pates, rilletes and mergez. I have never even heard of any of that.

Years ago I tried making sausage patties out of venison. Did not taste right probably because I did not add beef fat. That the one problem that I see with making sausage. My local grocery store could not supply me with beef fat trimmings.

I wish I had a specific recipe to share. Just sautéed some chopped onions, browned cubed venison and then tossed that in the crockpot with kidney/black/any other kind of beans you fancy, with canned tomotoes (fire roasted are best), +/- frozen corn, chile seasoning, cumin and cooked on low all day. Chili is super forgiving!

I made 8 lbs of venison summer sausage this fall. I just used a really old hand grinder. I don’t have a stuffer, I just use a stuffing funnel and push it through by hand. Not the best method but it works. I mixed the venison about two thirds one third with pork and pork fat. I really liked it, better than the straight venison I made last year.

Nice work with that sausage!

Curious if you used a kit to make that sausage. I was in a Bass Pro today and spotted kits containing seasoning, cures, casings and instructions similar to this one:http://www.basspro.com/Hi-Mountain-Sausage-Making-Kit-Summer-Sausage/product/97751/. Yes, kind of expensive… I have used Hi Mountain kits for jerky with excellent results though.

Also, spotted this book:http://www.basspro.com/The-Complete-Guide-to-Sausage-Making-Book-by-Monte-Burch/product/1309121643/. Seems to be really a lot to this sausage making! Did not buy it but it would probably shorten the learning curve, What do you think?

Mark, I render a lot of fat, and IMHO tallow would beat everything else for this application. Butter, at least grass fed butter, is too soft and separates some, plus you need to clarify it first or the casein will become unpleasant.

Tallow will keep the pemmican well insulated against oxidation and lasts forever without a hint of a smell. A mixture of tallow and lard is a second acceptable substitute, I have made some pure lard that would fit the bill here but some lard is just too soft. And steer back fat is very cheap. We bought with two other families half a steer and the butcher threw in there both back fat packs, free. I usually grind them, frozen, in the food processor, and then let them simmer until ready.

I think tallow would a great choice, and you’re right about the butter. Leaf lard off of the kidneys would work well, wouldn’t it? (We used to buy 400 pound barrels of lard and sometimes it would get so soft during the summer that we’d ladle it out.)

I think the original consumers of this product probably used deer, antelope, elk, buffalo fat, and so on, as their first choices. Those fats coat things pretty well- a woman I worked with is a Crow and says her family was called “Greasy Spoon”, evidently because they had plenty.

Thanks for the input on the tallow not smelling and lasting so well. Good points,

I make it from scratch. I use a morten tender quick recipe. I bought a small bag oh tenderquick that will probably last me the rest of my life for just a few dollars. ( that is basically the same as a “cure” packet in high mountain). I seasoned it with Red pepper flakes, mustard seed, Italian seasoning, and sage. I bought the casings at the local grocery store, ( not a big box store) I was pretty impressed with the amount of sausage they held, I think they were 8 dollars and I made maybe 15 pounds of sausage with them.

If anyone has a thing for historical cooking this Jas. Townsend & Son Youtube channel is really informative. I don’t really have much an interest in most of the cooking, but I think the history on the channel is interesting.

Here is a recipe for pemmican.