Both my Blue Lake green beans and my Eureka wax beans have suffered in the recent stretch of hot/dry weather. I think I’m partly to blame though, as I was late at getting the water to them. (we’ve had a couple nice rains recently, and temps dropped lower for about a week, though yesterday and the rest of this week look toasty…)

I’ve seen over the years where high heat kinda puts them in a holding pattern where they won’t do much until the termps moderate some, but here I actually lost a few plants. Percentage-wise it wasn’t a big deal, but it still got me to thinking.

Was talking to a farmer friend at a ball game the other day and he was saying that they track the weather religiously and that they’re struggling with the huge swings more than anything. Super hot - super dry for a couple weeks, then abnormally cool temps etc.

I think I want to at least have a row or two of heat tolerant green beans in my garden next year just as a hedge against failure of my old standards in abnormal temps. (I do think I’ll still get a pretty decent crop this year, just not what I was expecting).

So does anyone have any recommendations? I may even expand this thinking to tomatoes before it’s over…

Down here in Florida we grow both pole and bush beans. they do really well in the heat. Personally I’ve had more luck with the bush beans as they do well even in poor soil.

I’m still trying various types, and so far I would say the most vigorous pole beans have been fortex. Like you mention they shut down in high heat, but none of mine died, and began producing till frost. It could be conditions and not bean, so hard to say. Really only fortex has impressed me. I did have a purple that was decent too, Purple King, Last year I tried Blue Lake, and you have about 4 kinds of Blue Lake for one. Bush, pole, light, and dark bean. I had dark pole beans. They hardly grew. Trying again this year.
Fortex beans are long around a foot! Purple King was large too. 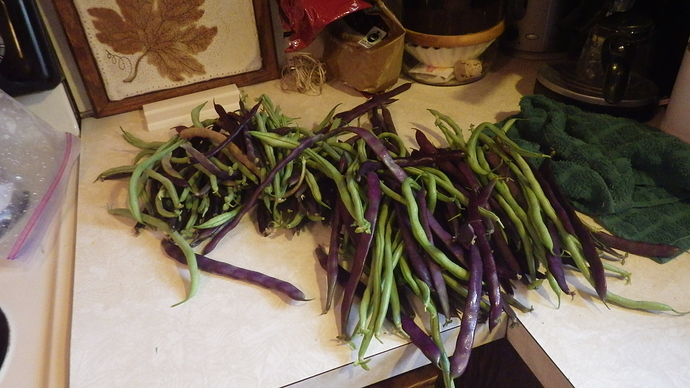 I haven’t seen too many drought tolerant green beans but we’ve managed to minimize our watering needs through the use of hugulkulture:

Each of our beds has 12" of soil above grade and 2’ of wood mixed w/ compost below grade (surrounded by Clay which provides some insulation properties). We’ve been seeing 90+ degree days for weeks at a time and I have yet to water our beans. They are full of flowers and beans so there is something to be said about this practice. May not help you now but could be a nice fall project.

they do really well in the heat

Well I may have jumped the gun, and mine may turn out better than I think they will in the end. These last few days of cooler weather have seemed to make them think life is worth living again…

Last year I tried Blue Lake, and you have about 4 kinds of Blue Lake for one.

The ones I get are called Blue Lake 274 bush beans. I’ve planted them forever, and yet I have zero idea what the 274 is all about. In fact I didn’t know there were anything else besides pole & bush until I read your post. How do those foot long beans taste?

I haven’t seen too many drought tolerant green beans

I haven’t either in my limited searching, but I assume things that grow well in places that are very hot (I’m thinking about Southern states that in my minds eye I picture as just having blistering summers) would probably help me to hedge my bet a little.

That was a real interesting link you put up. Little to no watering & tilling sounds good to me!

We live within 100 miles and have had good luck with Jade II. Beans get to be too big for my taste so we pick them early. Pretty much ignores heat but don’t forget timely drinks. Eureka gets tough in the heat too. For pole beans, Blue Lake S7 was fantastic last year. I think Jung’s sell the S7 variant.

Sorry Drew, grew Fortex last year and the taste was weak and after 5-6" they got real fibery

Strange because what I liked about them was they were huge and still stringless. I didn’t think they were fibery at all. I mostly steam them too, so not that cooked. I guess different conditions produce different results, and no reason to be sorry. I’m extremely happy with them and grow them every year.
Mine at 6 inches would be the size of twine, they grew long first than filled out. Some were 12 inches and extremely skinny. As time when on they filled out. What you describe doesn’t sound like what i was growing. Mine were from Burpee.

I have not tried a lot but quite a few. I’m still evaluating these. This is the 2nd year for about half of these. I’ll decide at the end of the year, if they are keepers. I only grow pole beans currently.

Blue Lake Black Seeded - Not as common here in the U.S. among the many seed companies, but a bit later and larger
than the white seeded strain. Many favor it for its better flavor as well. Trials have demonstrated it will
provide for larger plants and a greater cold hardiness allowing for earlier plantings as compared to the more
common white seeded variety. Untreated seed. Purchased from Gourmet Seeds
COSSE VIOLETTE POLE BEAN
Cranbury Pole Bean -
Kentucky Blue Bean Seeds - the best of
two classics–Kentucky Wonder and Blue Lake! The enormous - to 9-inch pods are rounded, with smooth, dark green
stems and light strings.
Kentucky Wonder Bean Seeds
Meraviglia Venezia pole bean - Vigorous plant, heavy producer of up to 10 inch meaty light yellow roma type
beans. White seed. No strings
Monte Gusto

In the last two growing seasons, we grew white and Striped half-runners, and Blue Lake. The HR beans are very popular in these parts and grew well a couple years ago despite the heat. But our summer that year wasn’t too hot. We got 3 harvests of the HR’s, but the last batch was too fibrousy. We did harvest some Blue Lakes, but I just didn’t care for their taste, so we won’t be trying those again. I guess I prefer a pole bean like the HR’s over a bush bean like BL.

We are trying Rattlesnake pole, WV volunteer HRs and the rest of our striped HR’s this year. They were just planted about 3 weeks ago with the corn, which at the time was a couple feet tall. The beans are up, about 6" high now.

Now if I can just keep the deer from breaking my corn stalks! Time for another tape/fishing line fence…

winged bean is fine with heat. Young pods are nutrient dense and may be used instead of green beans or string beans. And the root may be roasted and eaten too.
It grows as a vine.

We live within 100 miles and have had good luck with Jade II.

Thanks for the recommendation, I looked it up and sounds like it’d sure be worth a try for next season.

Get it from Jordan seeds in the twin cities. Very inexpensive. You can get Eureka there also. I’ve done business with the Jordans for 30 yrs. When I’m in the cities in the winter/spring I pickup my orders. They are most flexible with arrangements, even leaving stuff for me to pick up at 330 in the morning.

Monte Gusto is really putting out this year. It’s been in the 90’s and it’s growing well. Remember for here, 90’s is hot! A short season area. Tonight I have enough for the wife and I. It’s even out producing Fortex. So far the only two to produce beans. The rest are still in flower. Very impressive cultivars, both of them.

I would have to agree on Fortex. Only pole green bean that has done well here in the south (other than yard beans which I don’t care for the taste of). I lost count of the gallons of beans I picked off a 100’ x 8’ trellis. Last year I planted it with bush types Dragon Tongue and Contender. It tasted similar to Contender. Large fruit that constantly replenished itself up until frost.

This year I only planted Contender because I still have a freezer full of green beans from last summer. I was shocked at how poor the contender did this year. This was hotter/dryer summer that last year. Would have been nice to see if Fortex would have held up same this summer but I just did not have the desire to be knee deep in beans again this year. Next year I will only plant Fortex and big mama.

I’m glad you brought up Fortex Drew, and the additional endorsement from Outdoor334 had me looking up Fortex forthwith! I even found a video of a gal who was very happy with them as well.

I’ve never grown pole beans but I am going to grow Fortex next season, along with Jade II bush beans.

My Blue Lake & Eureka are still putting on blooms and I think I could actually harvest some right about now in fact. But next year I’m going to diversify a little bit. (Besides, my wife has been wanting me to plant pole beans for awhile now, reasoning that they would be so much easier to harvest than hunkering over in a row of bush beans. If that proves out, I may be able to get a hand during harvest time…)

Being a backyard grower I don’t have much room, and really don’t need a lot either. I have a 12 foot row. By the fall I’m sick of beans! I really don’t have the space for bush beans. 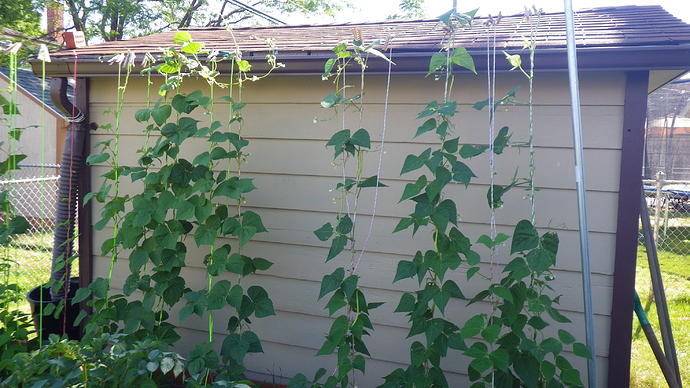 The hardest part about picking is seeing the beans. When first starting though they are easy to see. 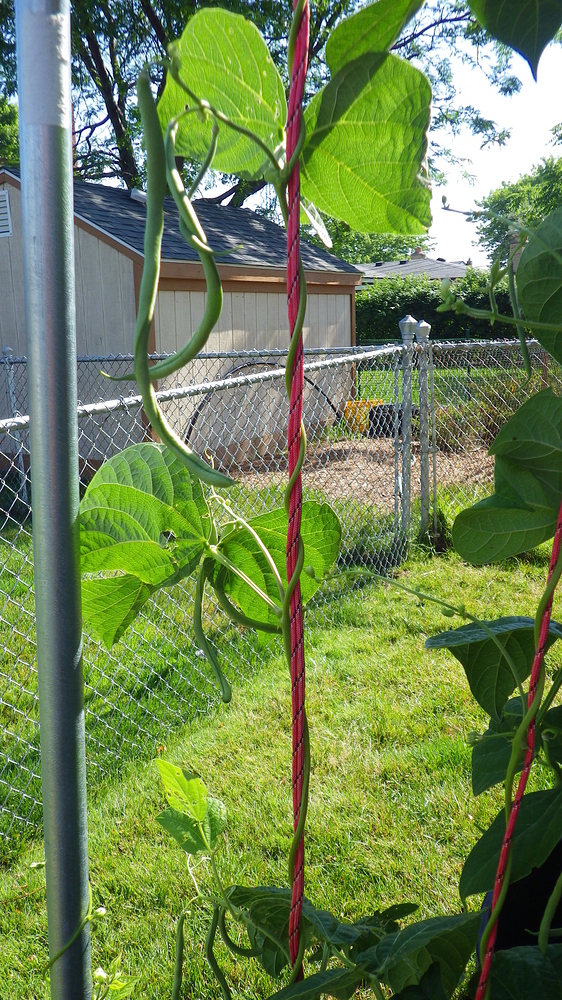 These are Monte Gusto wax beans and they are actually out producing Fortex! Looks like another keeper! Here again as I mentioned, they grow long first then fill out. 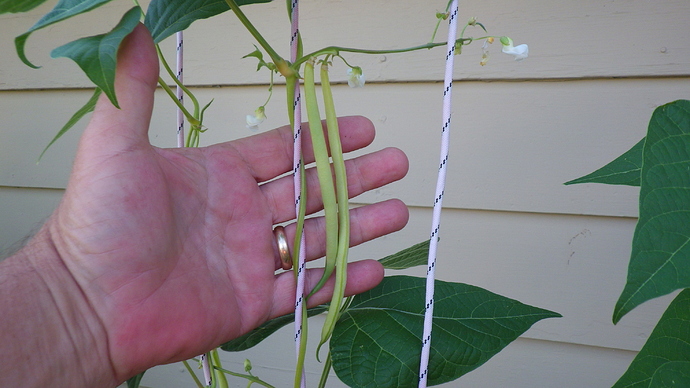 Where do you get your Monte Gusto?

Where do you get your Monte Gusto?

From Burpees, as mentioned about Fortex, different areas may produce different results!

Yeah I hate Burpees! I was just looking at the Jung’s site too! Well I hope to save seed, and not ever buy it again. Thanks for posting that! At least save people some money, and Jung’s might be new to some, it is an excellent nursery. I was looking at the onion seeds yesterday.