Any tricks for keeping cats out of garden beds?

Every spring, after turning the soil and preparing/ planting the garden beds, they immediately get dug up and befouled with copious cat excrement. Not only is it disgusting, but they often accidentally uproot new plants in the process.

Is there anything short of an impenetrable fence/cage that will convince the cats to go elsewhere? Pheromone sprays? Motion sensor sprinklers? One of the culprits is my own cat, but she’s not the only one, I’ve seen at least two others using “the facilities” recently. I’ve tried putting a litter box on the porch for my cat, but she doesn’t use it usually, preferring the fresh soil.

I lay down that cheap weld-wire fencing right on top of freshly turned soil. They seem to stay off it; I suspect they don’t like the feel under their feet, and it makes it hard for them to cover their scat.

Mouse traps. They will sting not hurt the cats and they don’t come back.

I use the black mulch fabric to cover the exposed soil. Keeps cats away as well as weeds.

Someone recommended this product, which they have successfully used as both deer and cat deterrent: 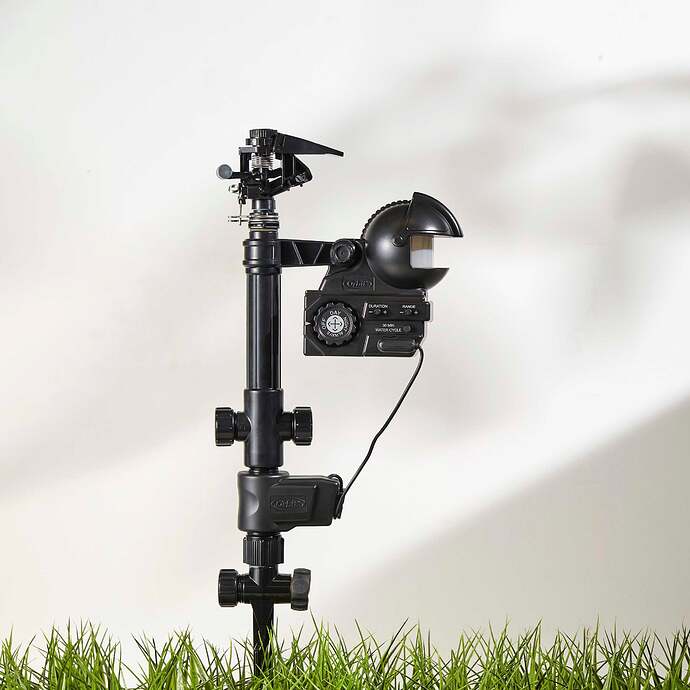 This motion activated sprinkler for deterring pests and wildlife with its motion sensor is easy to install and available direct from Orbit.

Not cheap, but looks well-made. Might go for it…

I am always dealing with the neighbors cats as well. One smaller raised bed that I mostly grow short veg in such as greens, beets, carrots. I made a couple of bridges of 2 x 2. I put a little chicken wire along the 2 long sides and then made a top that acts sort of like a flap which is a length of chicken wire with some 2x2 wrapped into the two short ends. This lays overtop the bridges, I just grab one end and walk it back over to work in that bed.
I have two berry beds that I just worked on. This wouldn’t work for a veg garden but so far is working great for the berries. I put down fiber mulch and then spread a several inch thick layer of large pine bark chunks over top. They don’t go near those beds anymore. Too hard, chunky, and uneven.
I use hog panel for colapsable tomato cages, cucumber, and melon trellis. On my new starwberry and asparagus bed I just laid my collapsed cages and trellis on the bed. It’s working great! I could see where one time they tried to walk through initially and haven’t been back since. This is really good because the squares are big enough that it is easey to work in and around and doesn’t really inhibit plant growth. And, by time I need it for the real intended purpose of plant support, I can just pick it up and place it where I want it. By then the soil will be setteled and not so enviting to the cats for digging, pooping, and just plain rolling around in while they dig up my freshly planted stuff and play with it.
I forgot, I do have a couple of those scarecrow sprinklers. I bought one years ago and got another on clearance at Walmart at the end of the season.
I will need them for the squirrels trying to eat my fruit!

I once used a mouse trap for a cat that was always in my mom’s flower bed. I slighty sprinkled a bit of dirt over it and I also secured it with some fishing line so the cat wouln’t run off with it. I put a thin stick in the ground with a bit of bacon hanging near the trap to draw it in. Later that day the trap was snapped, never saw the cat there again.