Any variety/species recommendations for cactus tunas?

I have a random prickly pear cactus that someone gave me that has survived a couple winters and is growing well, but I’m wondering if there are better vareities or species for fruit quality. Has there been much selection for fruit quality in prickly pears hardy to OF? If so, does anyone have favorites or recommendations? I’d be willing to sacrifice productivity or size for better tasting fruit, although I might want some of both. (I know there have been a couple threads about prickly pears already, but I didn’t see any particular variety or species recommendations.)

Oikos has some…
They claim are hardy and good fruit. Have not tried .

My observation is that the large sweet fruit is in Mexico
And probably not hardy in the north.
The northern strains are smaller.edible but not so good.
I have 4 kinds . None of wich I would recommend for the fruit.
I have eaten the pads. Throw on coals in a fire to burn off spines.
Roasted , …
like a green bean
If you find a hardy one with good fruit iam interested

Some I’ve had are hard seeded and others are soft seeded. Sure is a big difference in fruit and petals! 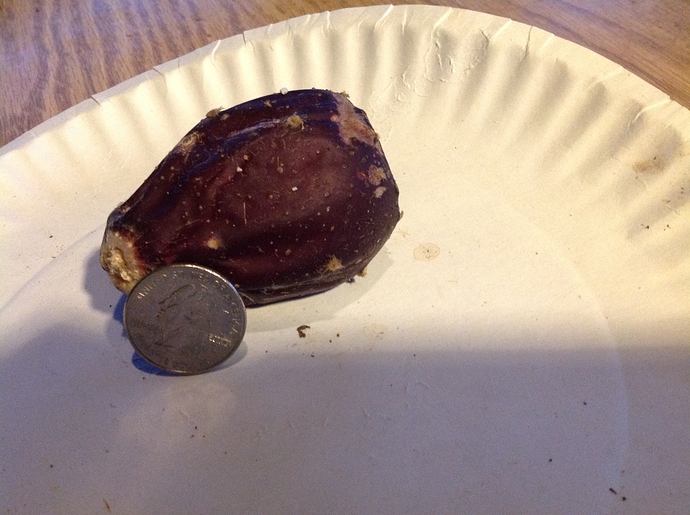 I have this one.which I forgot about until you mentioned it.
I collected this in Tiffton Ga in Aug . Near NAFEX meeting.
This has been sitting here since Aug. just cut it open, 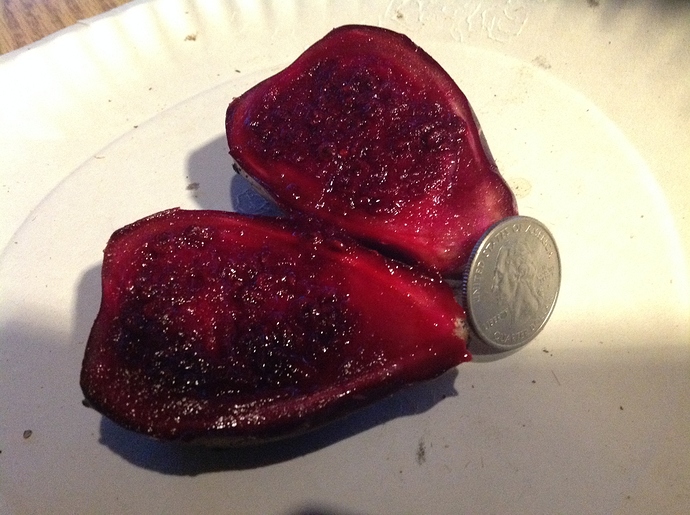 Not sweet anymore , but not rotten.and there are seeds.
They were sweet in Aug. collected pads too.
The plant was about 6’ tall , large pads,like the Mexican types.
Probably not hardy here,inside for now

Here is a pic I took at Tula ,in Hidalgo , Mexico .
This thing was like 12’ tall, and prolific. 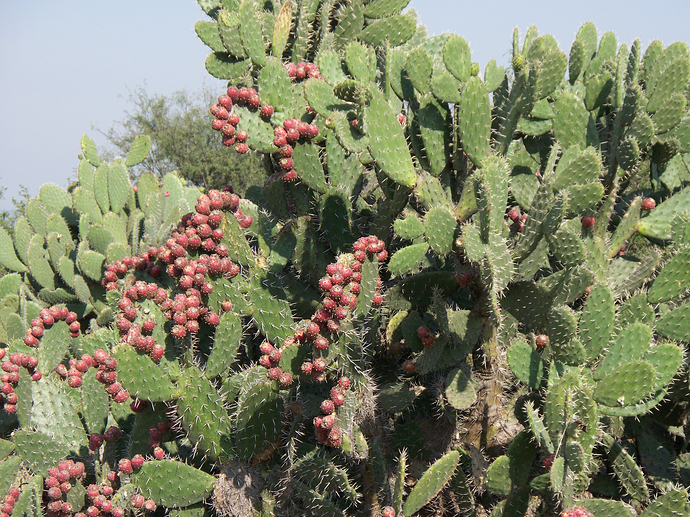 I have a yellow variety i will be growing indoors, it also is mostly thornless

Yes burning
Hold them with metal tongs over a gas stove, or the coals of a fire…
Their are very few truly thornless varietys.
It’s not the big thorns.,that worry me .its the tiny ones that you can hardly see that that will stay In you for days.

Years ago ,…my roommate came home drunk, fell on a 3’ tall prickly pear of mine… When he stood up he had those pads stuck all over him.
Took several people ,several days to get "most "of the thorns out of him.
He likely still has some ?

Sorry if this is off topic ,a pic from Oaxaca those columns are so close together a cat could not get between them, and prickly pear behind ,just had to share . 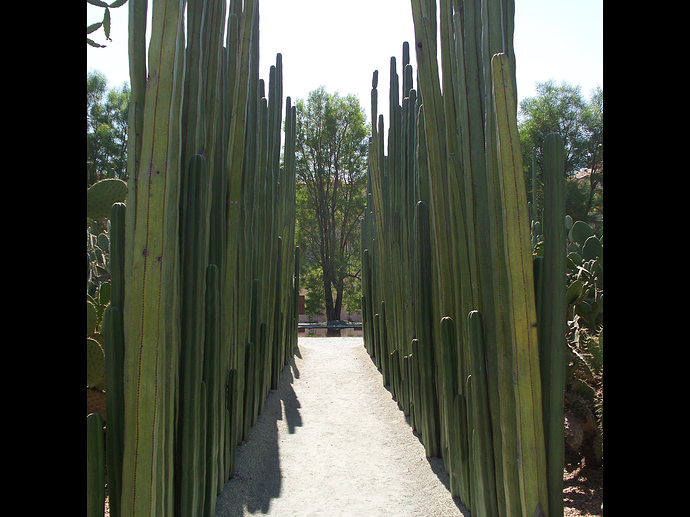 Rolling river sells a bunch of these, but they’ve been sold out for a year. Has anyone gotten theirs to fruit in a pot? I don’t know if mine isn’t flowering because of age or simply because it’s potted. I think it’s had three summers so far in its pot…

Good topic. I think a guy that is doing interesting work with cactus is the guy behind ColdHardyCactus.com I asked him what would do best here in zone 6 and he recommended me his: OP034 O. phaeacantha Paradox Form, OP010 O. gilvescens, OP088 O. Barr’s Dwarf and OP085 O. Eastern Star., O. woodsii, O. ‘Brilliant Orange’, O. gilvescens, O. engelmannii.

I ordered a few last year and they grew well and survived the winter no problem. One flowered this year and made a small fruit that didn’t fully ripen. Here’s a picture. 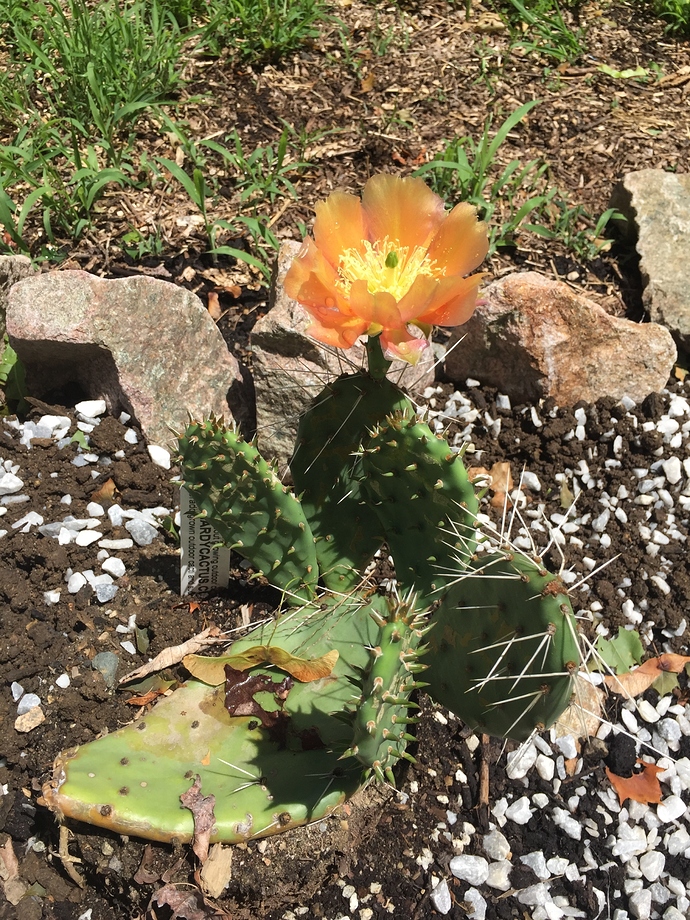 Do you get a lot of fruit? Any tricks to get mine to start blooming? They overwinter indoors in a north facing window and I move them into the greenhouse around April

The ones I have that bloom / fruit live out side in a pot above ground year round . Fruit is small not very good ,nice yellow flowers
They are hardy here zone 6b wv. There are wild ones in the wv mtns
And up into Michigan .
Just give yours as much sun as you can.
If you have an extra pad , put it in a pot next spring outside,in a sunny place and leave it there .It may die or it may like it.some are hardier than others.
Most cactus like water when it’s hot. During cold times water sparingly.

Good link, he has got em
Thanks

Steven, with just a little browsing around on the coldhardycactus site I didn’t really see any information about fruit/fruit quality. It does look like a a great selection of ornamentals, some of which probably incidentally have decent fruit, but I didn’t miss information on his site specifically about fruit, did I?

Yeah, the site doesn’t specifically call out fruit quality for the most part. I’m not sure why. That’s why I reached out to him directly and asked which ones have the best fruit for my zone. I guess I won’t really know what I’ve got for another few years.

So are all those cacti you listed ones he recommended to you for the fruit?

Correct. In the email I sent, I phrased it: I’m wondering if you could recommend a few of your cactus that would produce the tastiest fruit in zone 6.

A few of his selections do actually mention fruit quality in the description, but most don’t.

I emailed Kelly @ Cold Hardy Cacuts back in June. I got a slightly different list. I guese he replies off the top of his head

Hello, the only ones with good “juicy” fruit are the phaeacanthas like OP034 which is ‘Paradox form’, ‘Plum’, gilvescens, ‘Mesa Sky’, woodsii, ‘Brilliant Orange’, ‘Nectarine Beauty’ (not listed on website), and if you are in zone 6: engelmannii (not listed on site but available.)