Was in my local market yesterday and notice they were selling small baskets of these beautiful red blushed pears called Forelle. I had never heard of them but they looked and smelled really good so I bought some. For a euro pear I was quite impressed. They were crisp and juicy and likely a bit under ripe but flavor and aroma were there. They are sitting on my counter to ripen up a bit more.

A quick Google search showed that they are an old heirloom variety originating in the Saxony region of Germany. I’m a big asian pear fan and prefer them to euro pears but I was quite impressed. I searched for it here on growingfruit.org and didn’t see any mention of it.

Here is some info on Forelle: 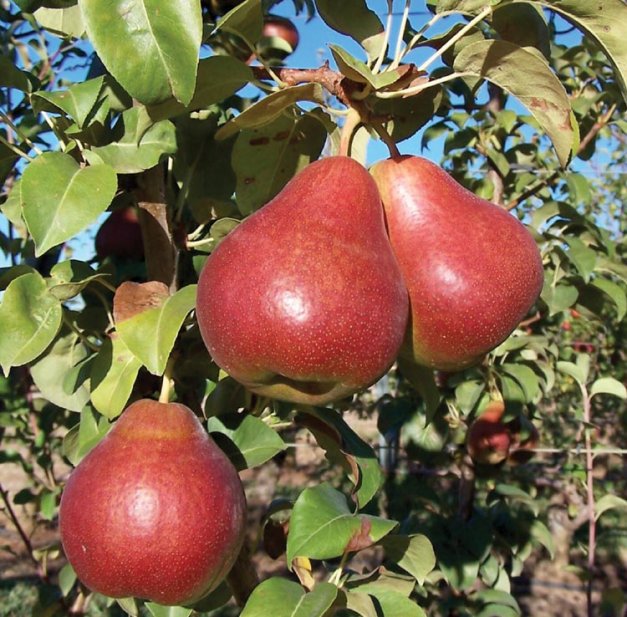 Forelle is an attractive, medium-size pear that requires special management and skill to grow it to

The name “Forelle” means trout in French, and for the pear’s very pronounced lenticles (speckles). It can also develop a very pretty red blush if the fruit gets enough sunlight. I know it blooms very early, and is self-sterile, so you’ll need another very early blooming variety for cross pollination. If your area is prone to late frosts, this might be problematic. I considered Forelle for my pear collection, but it is not very resistant to FB, so it got taken off my list. But, I hear it is quite delicious, melting, no grit. Sounds like my kind of pear.

Thanks Patty. That’s interesting. I hope to hear from any members that may have tried growing it. It’s a very pretty piece of fruit as the red blush is very vibrant when compared to Barlett or Seckle. It’s the most aromatic pear than I’ve smelled, of coarse I haven’t ever tried one of the Chinese fragrant pears.

Me, too, Dave. I have several heirloom pears in my orchard (12 total, budwood coming later this year, and 2 more on order). So, curious as to how this tree has done for any of our forum members. It sounds lovely, and I almost ordered it from Trees of Antiquity a few years ago, but I was worried about FB, and I was seeing it here and there out in my community in the flowering Bradford pear trees that were used very commonly about 20 years ago here, in commercial plantings. So, got a little FB gun-shy with it. I like it because it’s little. Just the right size for a snack for me, like my little Seedless Kishu mandarins

Hah, yes, Jeff, it is GERMAN for “trout”. Pardon my French!

Hi
I have been looking for some scion wood for this pear.

Does anyone expect to have any available for next year ( or even now???)

I probably shouldn’t even post this pic because the camera doesn’t do it justice. The red blush definately doesn’t show up in the pic. Not to mention this particular pear was the least colored out of all that I bought. But here it is. They are quite small. 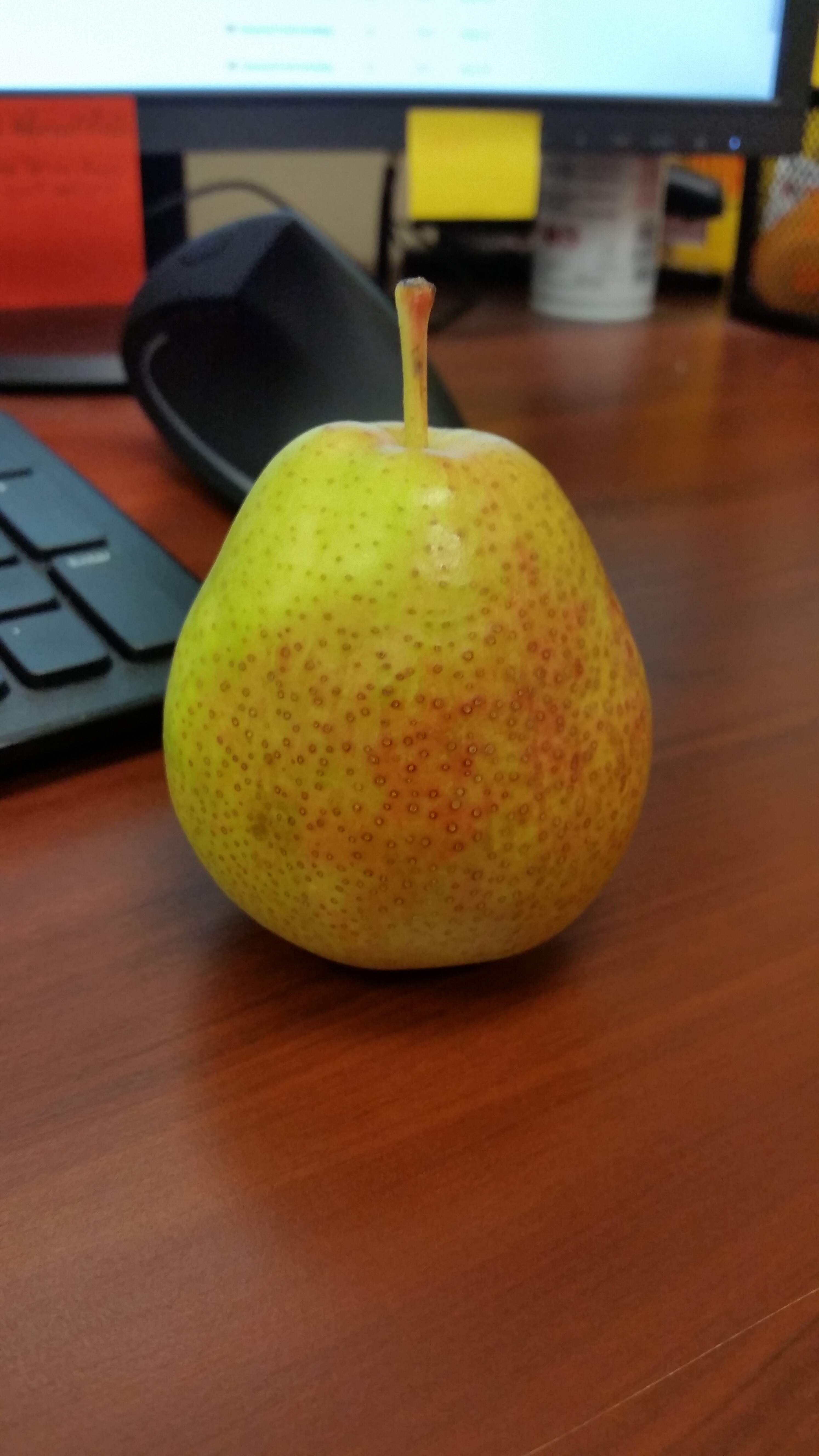 Mike have you tried ARS Corvallis?

I hadn’t tied ARS but will for this a a couple of others I am thinking of.

The problem with Forelle is it’s extreme susceptibility to fireblight. I looked into it a while back and it seemed that nearly all those who attempted growing it had problems. In my area, that’s a no-go.
It definitely is a very good pear though and probably the most visually attractive of all.

Jeff, that was my determination, too, even though I can’t say we have massive FB pressure here. It just sort of pops up when conditions are just right. I have only seen it appear once in my yard, and on my Seckel of all things. I had a tiny heart attack, and hacked it out. Treated all other trees that I could. Have not seen it come back, since. Dave, Mike, and others I will be interested in how it performs for you, so looking forward to reports back.

Patty, I decided against it on the basis of FB, but then turned around and selected Bartlett anyway, and Red Bartlett at that. I think I would give it a try if I had more room, but it seems to me from my reading that pears are something you can choose good disease resistance and still get a tree that makes very good fruit. I also have Potomac and it has fruit this year, so maybe my opinion on the DR pears will be solidified or nullified.
I’ve long been interested in how this pear would be reviewed by board members growing it, and especially those in similar climate conditions to mine.

Patty, my sister had a Seckel on her property north of Eureka on the coast. It would get some FB most every year that never went beyond small wood. There was a nearby 3-1 pear of unknown but probably common types of pears (I’m never there in the summer), including Bartlett, that never was affected in over 30 years.

Here I often get a few strikes in Seckel trees and have lost one. It really isn’t all that resistant to FB in my experience and I don’t know why it is touted as such. It is apparently more resistant than Bosc, a real FB magnet for me, but that is not much of an endorsement.

Forelle is one of the most beautiful pears, its main claim to fame is the looks. The taste is also very good, not the best but still worth growing. Here is the Pears of New York description. Its interesting they say nothing about fireblight, they are usually mentioning that if its bad.

The pear fancier prizes Forelle for its singularly handsome and distinctive fruits, which are also of very good quality. Forelle pleases the eye, as well as any pear for bright colors, and is distinguished among fruits of its kind by its trout-like specklings from which comes the name Forelle, the German name for trout. Looks do not belie taste for the flesh is delicate and buttery, is highly flavored, and satisfies those who regard high quality a prime requisite in a pear. The trees are very satisfactory in warm soils and exposures, but fail in heavy clays and cold climates. The variety is worth growing for its beautiful and distinctive fruits.

Nothing is very certainly known of the origin of this pear, but it seems highly probable that it had its birth in northern Saxony at the beginning of the eighteenth century. From Germany it was taken to Flanders, and from there introduced into England. In the latter country, it was first fruited by Thomas Andrew Knight, President of the Horticultural Society of London, who, in 1823, sent cions to the Honorable John Lowell, President of the Massachusetts Horticultural Society. Forelle became quite widely disseminated in the eastern United States during the first half of the eighteenth century, and was considered by many pomologists a pear of merit. At the present time, however, the variety has almost disappeared from cultivation. Its place has been filled by Vermont Beauty, a pear introduced from Vermont more than forty years ago. It is not improbable that these two varieties are identical. Vermont Beauty may be the old German pear renamed.

Thanks, Alan, my suspicions exactly with Seckel, but I keep it because it is just so yummy. And here is what the “Great Book of Pears” has to say about Forelle:

“Germany, Ancient (also called Trout Pear). Forelle is the German word for trout, so named for the red spots on its skin. These spots diffuse gradually into the skin after the fruit is picked, eventually becoming a crimson blush. Its eating quality is only fair. The flesh is smooth, dry and rather low in acid and sugar. It is an heirloom usually grown because of its great beauty and has only recently been rediscovered by commercial orchardists.”

I just finished eating my last Forelle and to me it’s the best euro pear I’ve tasted. That being said I’m not a pear expert and I prefer asian pears to euro pears if that means anything. My 5 year old absolutely gobbled them down the last few days and asked me to pick up more from the market tonight. The only other time I’ve seen her this excited about a piece of fruit was last year’s Honeycrisp harvest from the local orchard or a exceptionally delicious bag of Ranier cherries we purchased last year. I can’t wait until my own trees are producing and I don’t have to rely on local stores so much.

Dave, then it’s the pear for you. It’s always about what you like best, that should go into your garden. I always think about my little (tiny) Seedless Kishu mandarin. Scoffed at by commercial growers because of its golf-ball size, for me, it is probably the best tasting citrus fruit I have in my orchard. And that is saying something, as I have about 80 different citrus cultivars out there. It is simply outstanding, and I know, because I like it

It grows really, really well in my climate, unlike satsuma mandarins, which for me, I think are only fair to middling, even 5 year old + satsuma fruits. So, it’s about what you and your family like that really counts. I say, plant one and enjoy it. Your kids will learn that nothing in the world tastes better that a piece of fruit picked from their own tree. If they like the store-bought Forelles, can you imagine what one grown off your own tree will taste like? Heaven, that’s what

After the disease / insect problems we have had in the area I was gun shy of problem trees. I was going to order it this year and put it off in the corner of a field by itself but thought twice about throwing away my $30. It is tempting to order it while it’s available but I could not bring myself to do it after having lost 2 trees to FB in the last couple of years suddenly. I knew better than to try to grow clapps favorite in the first place but did get by with for 15 yrs until it was suddenly killed to the ground. I suspect Forelle would be another maybe worse that clapps favorite FB magnet. If your brave enough here’s the link http://www.treesofantiquity.com/index.php?main_page=product_info&products_id=204

I know someone who has a little Forelle tree in the essentially abandoned orchard that she acquired a couple years ago. When we found it (perceiving only that it looked like some kind of a pear tree) it had two healthy-looking fruits on it (and a couple past their prime) and we each grabbed one and bit into them at the same time…we both nearly swooned from the luscious flavor. I suspect it’s like so many fruits that we read about on this forum: so many different perceptions and growing conditions, etc. My lady friend with this orchard knows nothing about orcharding and her daughter and son-in-law who live there with her will be overseeing the health and well-being of all the orchard, gardens, and wild fruiting trees in the vicinity. I didn’t see any diseases on any trees. This little semi-farm is in a tiny, secluded, mountain valley in the coast range in Oregon. They even have a healthy American Chestnut among the many trees (up in the forest…native?). It’s kind of a Shangri-La.
I hope to get a scion next Winter and maybe attach it to a rootstock and plant it as far as possible from my three current pear trees.