I can’t grow regular seedless grapes where I live, too hot and humid. I tried once and made a nice vine with large clusters of grapes. But, eventually disease took it out. I can grow muscadines now and they grow really well. Of course they have seeds and the skin is very chewy. But it’s really cool to have these vines all thick with plump berries as big as your thumb. When mowing, I like to grab a handful when passing by and pop 'em into my mouth. You would be surprised how tasty they are. 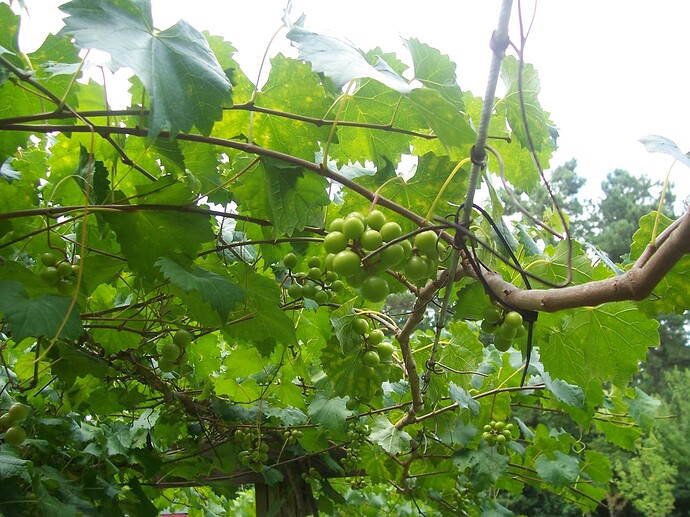 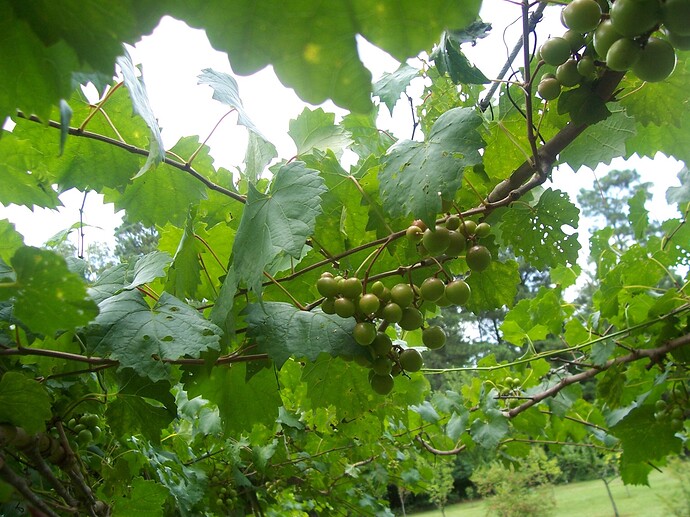 If you are OK with seed spitting and chewy skin, they are really growable and worthwhile when you choose some of the better varieties. Some of the green/bronze varieties are equally very tasty. I have plenty of both black and bronze vines. The critters like them also. No surprise there. Getting lots of tasty grapes w/o any chemical spraying at all is a good deal.

Fruitility, not much spraying maintenance is really nice. Them dang coons and deer usually get more than I do.

Are you sure it was just the heat and humidity that prevented you from growing grapes? I’m about as far from a fruit expert as anyone, but I’ve had incredibly good luck with some varieties of grapes and I live in Tennessee- about the same weather as you’d have in AR I suspect. Now, they aren’t grocery store type grapes and still require swallowing or spitting the little blob of seed and the chewy peel, but they taste great and make grape juice to die for. I’ve had great luck with concord, Catawba, Niagara, Fredonia, and Mars. They are MAGNETS for Japanese Beetles but a little seven dust every week or two from mid summer on takes care of them.

@thecityman, how many years have you had your grapes? It takes about five years for black rot to set in. I was doing pretty good with my grapes until that showed up.

What I have learned is one spray of copper just before bud break and one spray of myclobutanil at 12" shoots and I do OK with regular grapes. So, not too bad but they do require more work than muscadines. I also need to watch the JBs, I used Surround this year but I missed one plant and it got nailed by the JBs.

I am now trying a bunch of muscadines, six varieties total. We will see which I like better in the end. So far they have all been hardy for me except Tara which died to the ground last winter. I have been pleasantly surprised at how nice the muscadines taste, my kids even like them and they are very picky fruit eaters.

Scott- Whichever varieties get crowned as your MVP may leave you with an “I wish I had planted more of this variety” feeling. If so, any vines that fail to get a good grade can be converted via grafting in Spring using scions from your MVP vine(s). I did many such grafts and sorta learned which techniques made it more likely to grow out well. Of course that means I learned the no-no’s via lots of dead scions. If interested, I would type up the steps used to invent the wheel so that you don’t have to re-invent it.

Check out this guy’s operation:

I plan to plant Ison and Fry Seedless Red. You trying those? Is your Black Beauty still alive?

I was gonna try Tara too, but not anymore! If it winter killed for you, then it definitely won’t survive by me here!

Hey Cityman, my grapevine was a Jupiter or Mars, can’t remember exactly. It came from The University of Arkansas. Anyway, it got a bad case of Pierce’s Disease after 4-5 years. Maybe I could grow seeded varieties like Concord, I don’t know. I didn’t want to invest many years into something and lose it to disease again. So, muscadines are a pretty safe bet to grow here. I’m right on the Ar/La stateline. Good luck with your vines!

Thanks fruitility, I may be asking about it. It depends on which varieties I like - I planted them very close and if the ones I like are spread out I can just let the good ones grow into where I chop out the bad ones.

@Matt_in_Maryland, the Black Beauty is still going as is Ison. I don’t have Fry Seedless. The Tara was pretty small and it will gain hardiness as it gets older I hope, so I am going to try to keep it (assuming it gets going, it got mowed down by mistake once already this spring).

Well thanks a lot @scottfsmith…now you gave me one more thing to worry about for the future! ha. I have been pretty excited about the success I’ve had with my grapes, but to answer your question they are only 3.5 years old, so it sounds like I may be in for trouble in the future. Like most fruit things, my knowledge about black rot was/is very limited! Oh well…I’ll enjoy them while they last.

I’m in North TN and you are in south AR, @justjohn , so it sounds like you’re considerably further south after all I suppose. Scott just mentioned black rot may hit me after 4-5 years and you say that Pierce’s Disease hit you after 4-5 years, so my good luck may well run out and make my comments about successful grapes be untrue in another year or two (I’ve only had my vines 3.5 years) What little I’ve read about muscadines made me think they might be killed in winter here (we usually get around -5 degrees once or twice each winter). Anyway, look forward to hearing how they do for you!

I planted 4 kinds of muscadines in October 2013 and gave my father 2 to plant. Both of his died the first winter- we both mulched on top, but it looks like his wasn’t effective. I used straw the first winter, then wood chips and snow this past winter. I guess it says something about how little they grew that I was able to cover them after an entire growing season.

This year at least one of them looks to have little grapes (either Fry Seedless or Supreme, I need to take another look). I also have Supreme and Black Beauty- all 4 are rated as most hardy by Isons. I’d like to get them to bear as soon as possible, as I’m not sure I’ll be able to baby them along indefinitely. Some of our winters in the 0 to -3 range may be OK, but anything like last winter (-9F) could do them in.

I recently added a hybrid muscadine/grape called Southern Home and I’m considering adding a new seedless one from Gurneys called RazzMaTazz. These two might not be an improvement over the older varieties but a seedless muscadine has a certain appeal to me.

Are Muscadines what i always called “purple grapes” when I was a kid? My grandmother grew what she called purple grapes and they were unlike modern red or green seedless grapes. They had seeds in them and we used to stick them up to our lips and squeeze them. This gelatinous ball of pulp would shoot into our mouths. They were tart but sweet at the same time. We would eat the skins although they had a weird texture. I always thought these were concord grapes but from your description I’m wondering if they are muscadines.

Bob, you list Supreme twice. What is the fourth variety you are growing?

Are Muscadines what i always called “purple grapes” when I was a kid?

I’n my location there are at least two different types of grapes growing wild. The muscadine and a wild type grape that is small and looks like regular grapes. Although most of the cultivated muscadines are sweet the wild versions can be tart and most have a thick skin. I’m guessing that you were eating the muscadine. Bill

After googling both concord grapes and muscadines I am pretty confident that my purple grapes were concord grapes. Slip skin type. I do not think I’ve ever has a Muscadine based on what I read.

Sorry, the 2nd one should have been Late Fry.

I am in the middle of Missouri, but grew up in East Tennessee where I loved finding wild muscadies, so I bought some un-named varieties from a Tennessee nursery a few years back. There are both purple and bronze kinds in my patch. They froze back to the ground the first couple of years, then we had a couple of warm winters and I got some fruit. Froze back again last year and have grown back some this year, but no fruit. The climate here is probably just slightly too cold, but I’ll leave them as is and plan to get fruit when they can make it.

BTW, I visited Sweetwater, TN a couple of weeks ago and ran across the Tsali Notch winery between Sweetwater and Madisonville. They only grow muscadines and have acres. Old fashioned muscadine wine is very sweet usually, and all of their versions have some sweetness, but they do make some very tasty semi-sweets. Beautiful setting, too. If I ever get enough fruit I will try my hand at muscadine wine.