Anyone use aeroponic cloners?

Hey everyone,
I’m currently planning on propagating several varieties of plants this winter. Currently planning for some hardy kiwis, golden currants (supposedly difficult to propagate from cutting) and some figs. I have access to an EZ cloner aeroponic rooting system. Has anyone used one of these gadgets before for dormant cuttings and is it really any better than just soil rooting?
Thanks!

I have been thinking about making a deep water culture cloning chamber for rooting avocado cuttings, which I believe is basically the same idea, so I’ll follow along here for the replies.

I like the idea of being able to control the root zone temperature with an aquarium heater rather than relying on heating pads under soil pots, where the heat dissipates more I think.

I have both built and bought aeroponic boxes, they are awesome. In particular they are fantastic for crimes of opportunity; visit somebody, out of the blue get a chance to pick some cuttings, five minutes after you get home they could be working on putting out roots. For me there were also the many times I just happened to decide right then and there to get a bunch of plants going. It makes getting them started so easy that you end up propagating more. On the other hand large volumes of hundreds would probably work best on a misting bed with the cuttings in sand.

I found out that a humidity tent is completely unnecessary, the cutting gets enough water from the bottom.

Building one is not trivial, you have to keep tweaking and maintaining it in order to avoid water spraying though the perimeter. Commercial ones remedy this by having a built-in lip to stop water from shooting out. On the other hand I had to modify the living crap out of a cheap high capacity unit I bought; the holes were not standard, too small on both the bottom and the foam collar. I had to resize every single one of them and replace all the foam inserts.

Wow, thank you for the awesome review! Luckily the unit I have access to is a EZ cloner which I’ve heard is one of the higher quality unites. I will definitely be trying it out with my cuttings. Do you use anything in your water like rooting hormone? Do you use distilled water?

I do have a bottle of Clonex but honestly plants will root without it. I use plain water. Most of the magic happens because of the amount of aeration the cuttings get, according to most research this seems to have the largest impact.

Also while we refer to them as an aeroponic setup in the strict definition of the technology they are not, because the nozzles spray water, while a true aeroponic setup uses a super fine mist instead of water droplets.

I currently have a large capacity generic cloner and an EZclone, the difference in built and quality is quite significant. Now; significant enough to justify the price difference? Probably not but that’s the price to pay for the additional quality. The pump itself and the nozzles are the same between cheap and expensive units alike. As a matter of fact order a bag of replacement nozzles, they do break and it is nice to have them when out of the blue you need one.

I particularly like how the EZclone top is much deeper, making it easy to put it aside full of cuttings while doing maintenance on the rest of the unit. On other brands with a shallower top the roots stick pass the depth of the top, you can’t just lay it flat on the table by itself full of cuttings.

Thank you, I really appreciate all the information!

After reading these replies and researching it a bit, I guess I misunderstood what is meant by aeroponics, it’s not the same thing as DWC (i.e., an air stone in a reservoir where roots are suspended).

Building one is not trivial, you have to keep tweaking and maintaining it in order to avoid water spraying though the perimeter.

Many years ago I built some small-scale DWC setups for other purposes, and it was not at all difficult. Basically just any tub or bucket with a lid, filled with water & nutrients and an air stone and aquarium heater. Cut holes in the lid for the baskets for each plant to suspend their roots into the water. The only slight challenge was having to periodically test and adjust pH in the reservoir, but it is pretty easy to do.

What benefit does aeroponics have over deep-water culture?

Much more oxygen getting to the roots (or cuttings in this case) and less chance of bacterial/fungal infection.

I guess that makes sense. I only ever tried it with a particular flowering plant that’s often grown hydroponically, and never had any issues with the roots, but I did use a pretty intense air pump and large stone, and emptied and cleaned the whole setup a couple times per year.

What I’ve been doing lately for avocado cuttings (and it seems to work great) is just sticking them in the back of an aquarium filter with the filter medium removed: 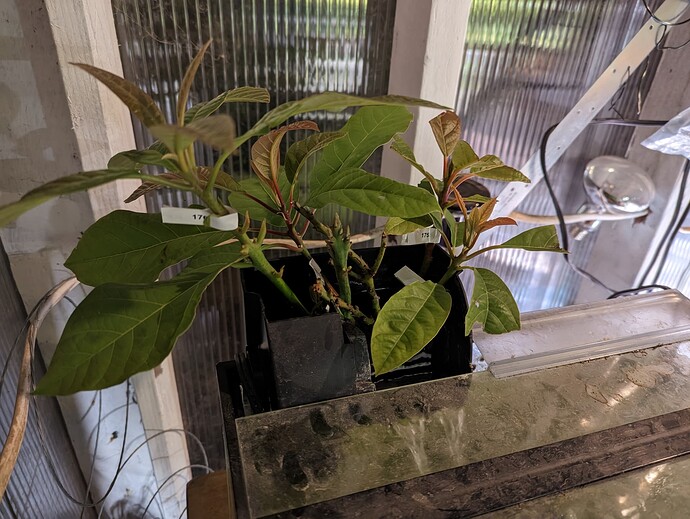 I leave them there for a few weeks until these nodules form, and then transfer them into pots with potting mix under humidity domes: 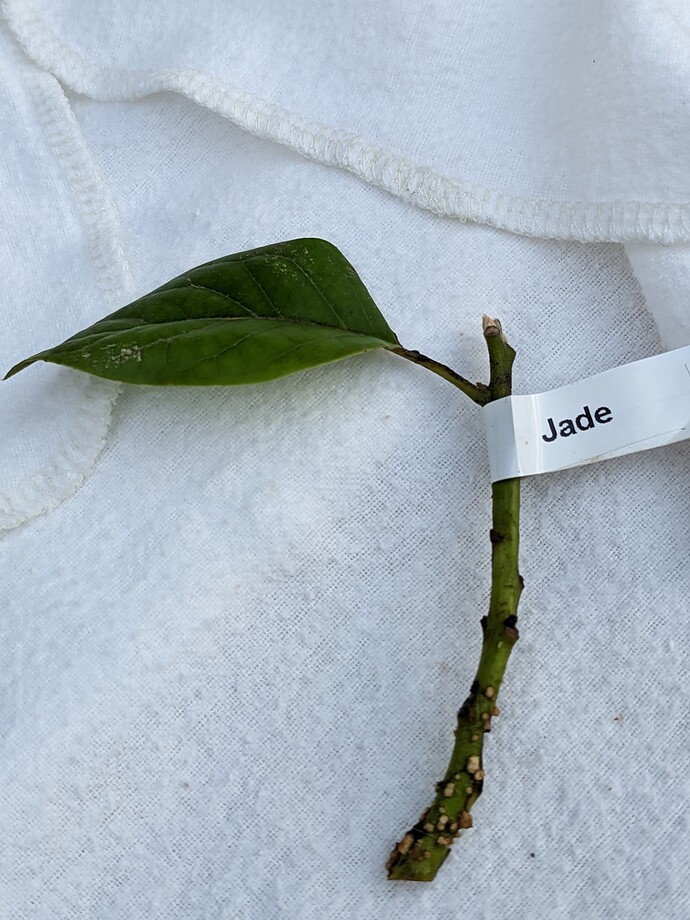 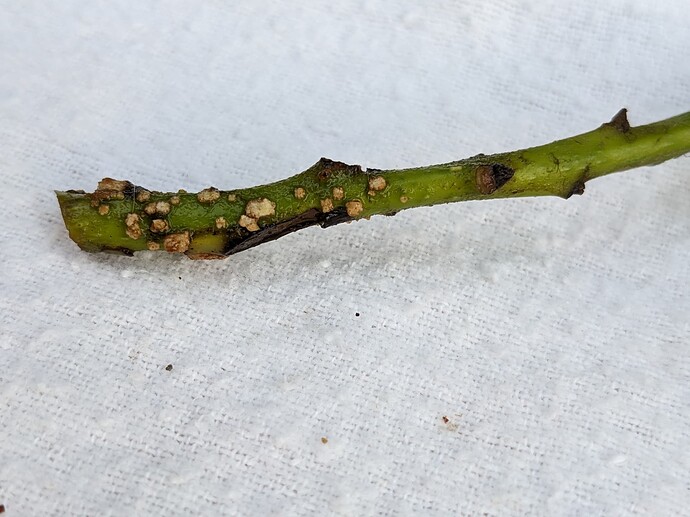 Using that two-step process seems to cut down drastically the number that shrivel and fail in the first few weeks, but I’ve only been trying this method for a few months and not sure if they’ll fully root later. My success rate for directly placing in soil was like 10% or so.

I figured if this is working ok, DWC with a powerful air pump and large stone should be even more oxygen to the cutting.

If the cuttings aren’t too fat, you can bundle a bunch in a modified foam insert, checking every couple days, and separating them when rooting, dipping in mycorhyzal and plant in new media. I like to add hydrogen peroxide in the liquid mix, keep the ph around 5-5.5. I will be playing around with propagating hazelnuts in this fashion.