Anyone with flower gardens?

I am already getting the itch to start sowing seeds in the house and was going through my seed collections (my head is spinning) and came across an envelope of flower seeds. Some of these are 8 and nine years old but I have not had problems germinating them. There are probably around 100 varieties (give or take) of flowers and to someone who could use these it would be a good find. I am trying to narrow down my collections and would like to give these away.

There are quite a few seeds in some of the varieties and there are plenty to split with multiple people but that would be up to the person who wants the whole bunch.

If there is any interest you can comment here or send me a PM.

There are annuals and perennials

I like to grow Zinnia’s, also looking for Columbine to increase genetic diversity of the ones I have. An annual that always self sows. Otherwise I would not plant them. And I need scotch bonnets that are actually scotch bonnets, and hot! I have one that is mild, looking for hot ones.

No zinnias but I do have the scotch bonnets you are looking for. When r u going to start ur peppers?

I’m always looking for new varieties to add to my butterfly garden. Will take whatever you can spare…

When r u going to start ur peppers?

Not for a long time, March probably.

We always grow lots of flowers. Not as garden-designer beds, but in rows like kitchen garden crops. We try to find ones that the local deer species and rabbits and slugs don’t eat, that don’t need much watering, and are easy to keep weeded. In the past, I had beehives and wanted pollen and nectar sources for the honeybees, but now it’s just for enjoying the flowers. Even so, there are lots of pollinating insects feeding on them.

Zinnias, marigolds, 4:00’s, gladiolas, and cosmos work out really well here. Also rudbeckias, daylilies - which have tasty flowers, nice for salads, and mints. It’s hard to kill bearded irises, but somehow I manage to kill most of mine. Nasturtiums are nice for show and salads, too. Nice peppery flavor.

Annual flowers are also part of the crop rotation, since the ones we grow are not related to tomatoes, potatoes, peppers, sweet corn, beans, etc. I used to plant daffodils, alliums, hyacithoides, and mints and lemon balm around the young fruit trees to see if they inhibited moles and voles, but I don’t think that really works. I still plant them, but just for looking now.

These zinnias were on the deck, but mostly they get planted in the kitchen garden. Just a standard seed mix.

I don’t really want any seeds, though. Sorry if I’ve veered off topic. Probably shouldn’t have. Just thought it was something to talk about. I meant to save zinnia seeds this year, but the fall rains left the flower heads soggy, and I thought they might not be worth the trouble. 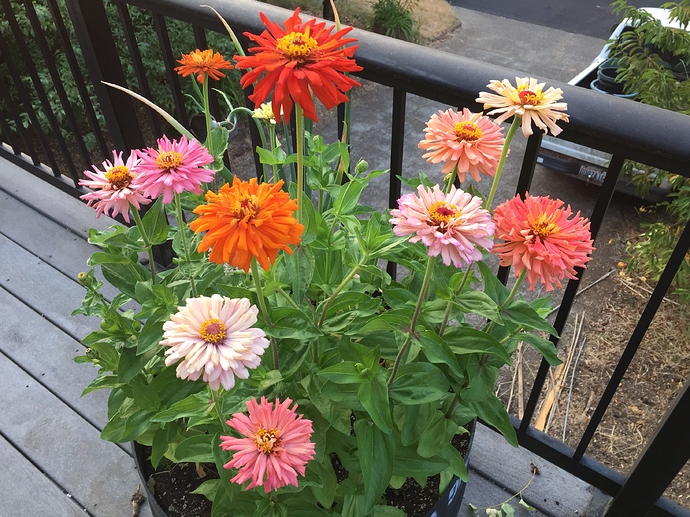 Jeremy, u can have them all. PM me ur address.

Do you lift your bulbs I suppose? I left one in the ground last fall and it did really well this summer.i mulched it heavily and left it in ground again this fall

I have a variety of hardy hibiscuses that I really like, in particular Summer Storm and Midnight Marvel.

Yeah, bulbs(corms) can’t take a freeze. Only my second year growing them but I do like them!

I don’t suppose you have any blue gentians or corydalis? My daughter and I have been working on a blue flower garden…

I had some difficulty keeping mine staked ,I used small bamboo stakes to try and keep the main plant vertical but they layed over badly anyway.

I have a sheltered sunny bed but they do fall over a lot!

I know this was last year and I don’t know if this is what you are looking for but you are always so willing to help I saw this and thought you may/ Or may not…be interested. https://www.brecks.com/product/songbird-giant-columbine-collection

Thanks, yes I still would like to add some columbine. I find the flowers fascinating as they self sow and you get new flower shapes and colors every year. They always seem to come up in perfect places in the garden too.

Do columbines also come back for you next year? It does for me. It is seeding a lot too - to the point to declare it a weed

It could be a problem yes, but in my garden it seems to only appear in bare spots. Easy enough to remove too. Not sure if the plants comes back? Here it does not seem to, only new plants. Not 100% positive though?

This year I want to set up a roadside stand with flowers. I am wild-guessing, if I can sell gladiolas at $2 a stem, and zinnias at $1 a stem, I might be able to pay for the garden plants and seeds in a few days of selling. The road gets some traffic, so maybe people will stop. If not, then we still have the flowers.

Our biggest challenge is deer. Deer don’t eat our zinnias, marigolds, tigridia, or gladiolas, but they do eat dahlias.

Should be a TON of fun…