This is the view from the front porch of my cabin. 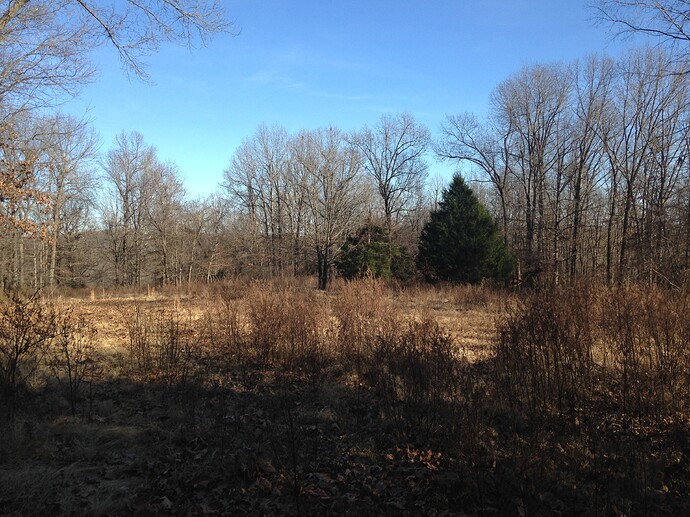 I would really like to plant a seedling Apple rootstock right out in the middle of that clearing. I am thinking that I would graft to verities of Apple onto it that would cross pollinate each other. I think old heirloom verities would be the way to go. Maybe something you could pick and eat right off of the tree in early November in zone 6. Does any one have a suggestion on varieties?

Given that you have cedars nearby you might consider Liberty, which is considered highly rust resistant. There are others, but I have a little direct experience with Liberty and I’ve found mine to be pretty much disease free here in arid Zone 4b-5. There’s considerable disagreement over Liberty’s eating quality, but I find it to be wonderful when it’s at its peak. I find it to be a fairly poor keeper, but others have said that they keep theirs fairly well. http://www.orangepippin.com/apples/liberty

Not an heirloom, of course, but derived from some fine old stock.

That’s a good suggestion, yes quit a few cedars around. They are kind of a nuisance tree here.

If you have a big clearing anyway, why not plant 2 trees. I’d think it would be easier to manage 2 trees, each of one variety, than a single big multigraft.

That is not a bad idea either

Does any one have a suggestion on varieties?

Derby- Keener Seedling and Black Limbertwig are excellent heirlooms that taste good and are known for disease resistance, with specific resistance to cedar rust. Keener is a very late apple, and BLT is October, probably. And then of course two trees would be lonely (smile) so they’d need company, right? Keener blooms early so Liberty would pollinate it. Then add Goldrush to pollinate BLT, despite rust tendency of Goldrush- it’s THAT good! See below:

David Vernon at Century Farm Orchard NC always advises not to let rust dissuade you from getting a great apple- usually the rust is just cosmetic and is ok for the home grower. I cannot vouch for this but David knows his apples, apprenticed under Lee Calhoun.

All good Ideas, although I think Hambone is trying to turn the little clearing into an orchard, lol. I do like what I have read about Arkansas Black, I also would like to have a black limber twig. I think I need to get a rootstock going over there this spring and turn some of these suggestions into reality.

You definitely want to plant Pink Lady. Rust resistant and ripe in November. My favorite November apple. Bred in Western Australia. I would suggest the Maslin strain as it ripens in early November instead of the original Cripps cultivar, which ripens in late November (sometimes too late to sweeten up properly in Zones 6 & 7). The problem is that Maslin is hard to come by. Sometimes Willow Drive carries it, but they may require a minimum order. Sometimes Wafler has it.

I recommend 2 other varieties that are excellent November eaters, but in a queer twist of fate, they both happen to be Triploids (they can be pollinated by Diploid apple trees, but cannot return the favor).

Roxbury Russet of Massachusetts. Fantastic green apple with a surprisingly sweet well-balanced flavor. Homely in appearance but taste is incredible. Best eaten sliced for the table. Pleasing texture. Also doubles as a good cider apple, hard or sweet. Resistant to rust and other apple diseases. A northern apple that does really well at least as far south as Zone 7.

You’ll need another Diploid to make sure Pink Lady and the others would be cross-pollinated. I second the idea of trying a limbertwig.

Myers Royal Limbertwig and Black Limbertwig are both supposed to be fairly disease resistant. They both ripen in October in Zone 7 and seem to get good reviews.

Red Royal Limbertwig is also supposed to be fairly disease resistant. It is supposed to make for good eating in November in Zone 7.

I believe all 3 of these limbertwigs were discovered in Tennessee.

I’m not sure Pink Lady would make it in zone 6, my season is even a touch short for it some years (they still are fine apples, just not peak). But you are definitely thinking in a good direction with late apples - the more I grow apples the more I appreciate the really late ones in terms of bringing in a good reliable crop that keeps well. Along with the other ones mentioned above, Newtown Pippin is a great late heirloom. Suncrisp and GoldRush are amazing, but not heirlooms.

Eating Arkansas Black for the first time I am really appreciating it’s flavor after some storage.

PL does make in in Z6 from my experience. Just be sure to keep trees open and thin liberally. Seems to keep getting sweeter into Dec and can take 20 degrees before it will lose its texture. The leaves hold late and apparently keep working for the fruit. It’s not all that different from Goldrush in lateness of ripening, but Goldrush is probably more susceptible to CAR. GR is still my favorite late.

I wouldn’t even consider Liberty- not that fond of the apple and it has a narrow ripening window before it turns soft on the tree. It does have a solid fan base, though, so you should find out if you are one because it is so grower friendly aside from its ugly growth habit.

Uncommented on apples are ones I’ve not much experience with.

David Vernon at Century Farm Orchard NC always advises not to let rust dissuade you from getting a great apple- usually the rust is just cosmetic and is ok for the home grower. I cannot vouch for this but David knows his apples, apprenticed under Lee Calhoun.

I meant to follow up on that comment. For years I just put up with the rust and while its hard to look at I think Davids comment is accurate: it didn’t have major effect on my harvest. I’m sure in some conditions it could get worse so it depends on where you are. The Big Baddie is quince rust, that is much less common but once it infects the fruits they can all be ruined. My quince and medlar plantings were pretty much destroyed by quince rust (just as I was removing them anyway due to being fireblight magnets). After taking them out I stopped getting quince rust on the apples. Whew!

CAR is also easy to control if you are willing to do a couple of myclobutanil sprays mid to late may in CT. Timing for PC sprays is identical so if you are spraying at all it doesn’t complicate things much.

I have seen it do real crop damage to infected trees on bad years, though, although scab is more likely to destroy apples as well as foliage. If a tree defoliates before apples ripen it can destroy the quality of the fruit and CAR can sometimes do this from what I’ve seen.

Not a heirloom, but I am really liking Enterprise Apple. has great resistance to a bunch of stuff. And it’s pretty good after a month or more in the fridge.

Lots of good suggestions and I think your idea of seedling stock is a good idea. Get it up quickly away from the ground and do like Alan does and keep the limbs up higher. Maybe even add the metal flashing guards like he does. I have to say I’d probably skip Goldrush with the Cedars so prolific. For me, Goldrush is really pushing it in my Z6. I’m also in the mountains as it appears (from your photo), you may be as well.
I personally couldn’t imagine skipping out on Liberty, it is just so well suited for your application there imo. There are hundreds of fine, late apples with decent overall resistance. If you really want heirlooms, you might also consider Black Oxford or some of the many other late antiques. The beauty of a lot of these is that the wood will be available free of charge and it really is fun to stick them all over a seedling tree.
Unless November is the only time you are at your cabin, why not add multiple varieties for more spaced out ripening?
BTW…I think Black Oxford may also be self-sterile, so if you add a lot of varieties, that will be something you’ll have to plan for. Adding a crab or two may also be beneficial. I’m also definitely down with the idea of Arkansas Black.

Plant one tree and others will follow. Soon the area will be full of close space apple trees. At least that is how it would be for me. Apple tree planting for me has been addictive. Good Luck, Bill

For sure, Bill, that’s definitely the truth. I think it’s more or less scientific law that it is how it works.

I took a day off of work and went to Mom and Dads to cut a little wood so I am just getting to see all of the great suggestions, likes all around. I really appreciate all of the interest. I agree Appleseed, I am thinking like a six foot tall trunk before the first limb. That should keep it out of reach from the deer and make a baffle pretty effective. I really like the sound of Arkansas black, maybe I should just choose a variety that compliments it and put one of each there. I will for sure get a root stock planted there this spring and get some roots going.

On seedling roots you can get many bushels of several varieties. One tree becomes an orchard onto itself. If you graft Ark Black as the exclusive scion it will reduce vigor a great deal but accelerate bearing just as much. On 111 it often bears the second year in my nursery- as does Goldrush.