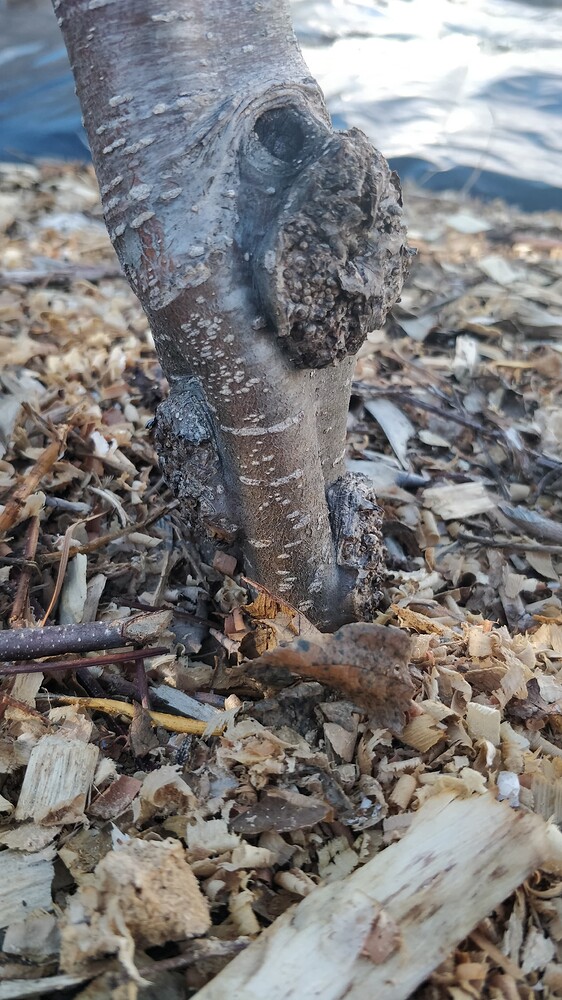 I’ve got two apple trees that I planted December 2021 (in coastal NC, near the southern outer banks) which both have this odd looking growth on the rootstock. Seems like it’s developing where the buds were at only on the rootstock and the rootstock seems to have grown a bit less than what was grafted to it. I haven’t done any weed whacking near them and haven’t made any pruning cuts at all on the trees yet. The only thing I did was plant them and then use those little branch spreaders to splay out the new branches a bit. I guess I also ran a tiller through a portion of the yard but I stayed a few feet away from the trees to try and avoid disturbing the roots too much. I’ll say I didn’t notice much issue with them growing this year; they seemed to grow more than my fig tree or persimmon tree did in their first year but a bit less than the peach or apricot. That being said, the only things to have aphids we’re the two apples and my muscadine vine so I had to clean those off once or twice and it seemed like something was enjoying snacking on the leaves. The trees are Yates and Hunge and both are on the same rootstock (I wanna say MM111 but I can’t find the email to confirm). They are growing near blackberries which seem to be healthy, honeyberries which seem healthy, and peppers which were very healthy/strong producers.

Any idea what is causing this? Should I be concerned? Is there anything to be done about it? If you need any more info just ask and I’ll try to answer. Thanks for any insight

Looks like burr knots to me. That’s not uncommon with MM111 when more than a couple of inches of rootstock are exposed. If it were me, I’d mound soil up around the base of the tree to cover them, taking care not to bury above the graft union to prevent the grafted variety from rooting as well.

Burr knots sound better than crown gall so I’ll hope it’s that. Would it be better to raise the height of the mulch or actually add soil/compost? That top one is pretty much in-line with the graft union so I wouldn’t be able to cover it AND keep soil below the union.

I think, if it were me, I’d add soil and re-cover that with a layer of mulch.

I noticed that the upper one is right up to the graft line. Not sure how to best deal with it. You could cover it partially, cover it fully and risk some minimal rooting above the graft, or you could try removing kit. @SkillCult published a video describing how he’s done that.

Thanks for the link! That was a very well made instructional for removing them and I think some of my woodworking tools will work perfectly for doing this. I think I’ll start with the top one and if that goes well I’ll maybe do the second one also just so I don’t have to raise the soil level too close to the graft. I assume it would be best to do this near the end of winter around the same time I prune so that the tree can heal quickly?

Seems reasonable to me, though I don’t have any experience with this. Perhaps @SkillCult or others can weigh in.

I haven’t done a follow up on that tree, but some grew back it looks like and some did not. It appears that the surrounding tissue, even without any visible root growing points can generate more. but some are healed up fine. I haven’t done a careful assessment, but I think it worked in most cases.