Apples and apples- pineapples that is

Client in Maui intercropping pineapples in his young apple orchard. He said so far they play well together. 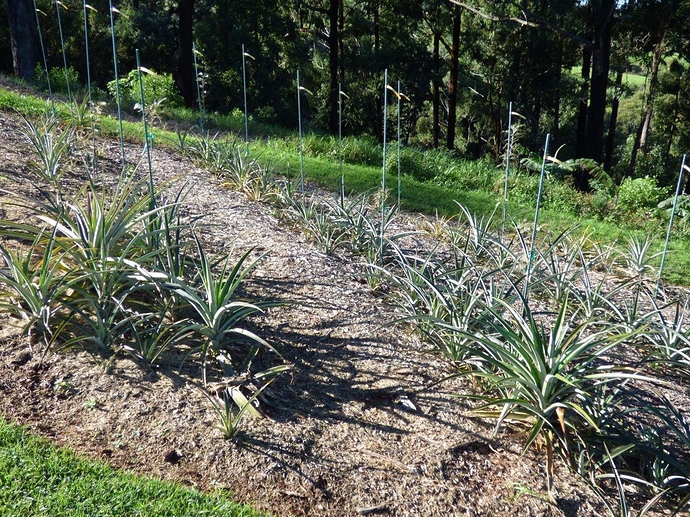 I was just planning what to use for potting up my pineapples tomorrow. I don’t think intercropping with my apples would be the right decision for where I am, though.

Containers are more appropriate for mine this time of year.

It looks great. It just makes me wish for

Apples are no strangers in Maui- this is a lavender farm at about the 1800 foot level. 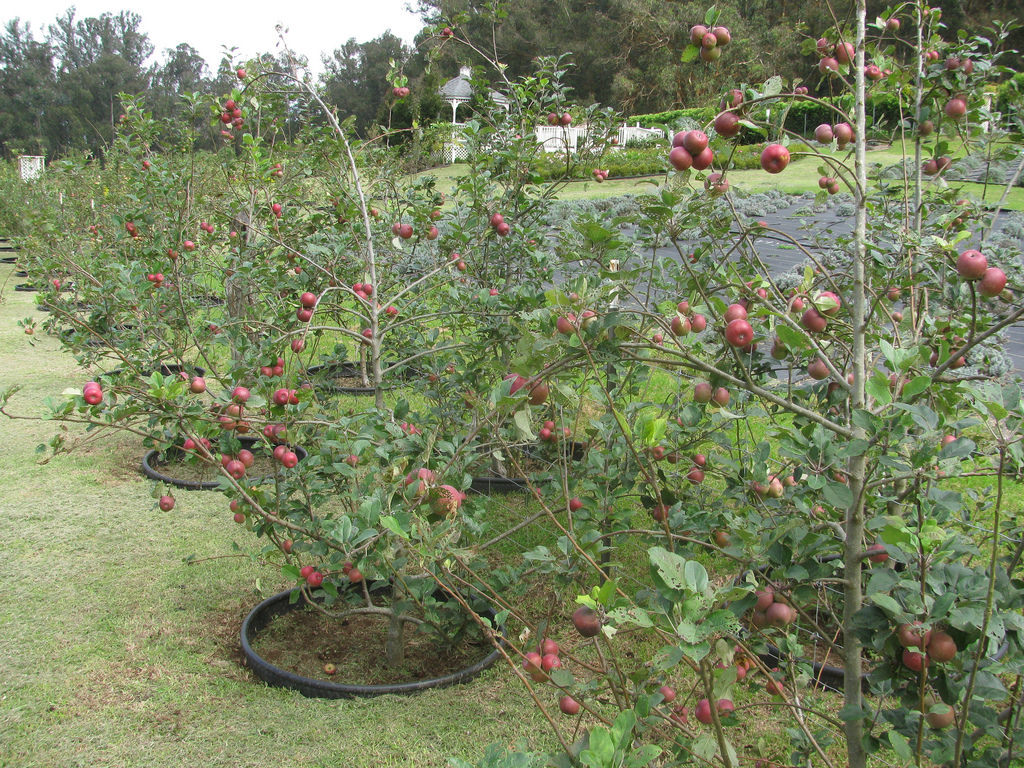 Fruitnut,
What is the lowest elevation can apple be grown in the tropic?

Temperature is not the limiting factor in growing apples in the tropics, rainfall is. Drenching rains during blossoming season knocks the flowers off the petals, keeps pollinators from flying, and contribute to foliar disease.

It was commonly thought that apples could only be grown in the cooler highlands, but even the highlands never get below 50 degrees F, and have to practice tropic apple culture. This consists of training the trees similar to tall spindle and manually defoliating the trees.

Dryer areas are easier to grow apples than wetter areas, especially if there’s the potential for irrigation. But even in wet areas they can be grown using fungal-resistant varieties. Fire blight is non-existent in many tropical areas, which is a plus.

I am thinking about Thailand and for my personal interest. We do have monsoon half of the year. I ask about elevation because Bangkok is sinking below a sea level

The north is on a high elevation. They can grow apples but commercially they cannot compete with apples from China.

I am fantasizing about buying a piece of land in the north and growing apples in my dream backyard. Then, the rain poured down and woke me up

I am thinking about Thailand and for my personal interest. We do have monsoon half of the year. I ask about elevation because Bangkok is sinking below a sea level

The north is on a high elevation. They can grow apples but commercially they cannot compete with apples from China.

I am fantasizing about buying a piece of land in the north and growing apples in my dream backyard. Then, the rain poured down and woke me up

Its funny. I wish I could grow pomelo, and take apples for granted.

Murky,
Just the opposite to you. The province where I was born is famous for pomelos so I took it for granted.

Apples are imported and it would be so cool to be able to plant them in the backyard, even just for a bragging right

Some of the most delicious apples and apple juice I ever had was in Manali, India, in the Himalaya. The orchards at 13,000 feet were vast as were the pear orchards. Amazing. They were all ‘stepped’ along mountain sides. A bit lower down the mountain were basmati rice paddies. Much colder than northern Thailand I’m afraid.

The timing of the monsoon is a big factor. If it waits until April to start, it can be done. This photo is from a client outside of Bangkok who started the trees in little shelters like she does with orchids.

You’ll never be able to compete with the Chinese imports, just like small apple farms here in the USA can’t compete with Chinese imports on commodity pricing basis. But they can definitely compete against a lousy-tasting Red Delicious with a Macoun or Cortland grown on a farm the kids can visit and have hay rides and press cider and pet goats and have hoe-downs and eat fresh apple pie. People won’t drive miles to buy a Chinese Red Delicious, but they will definitely drive miles and get on a waiting list for a decent apple, along with the apple experience. 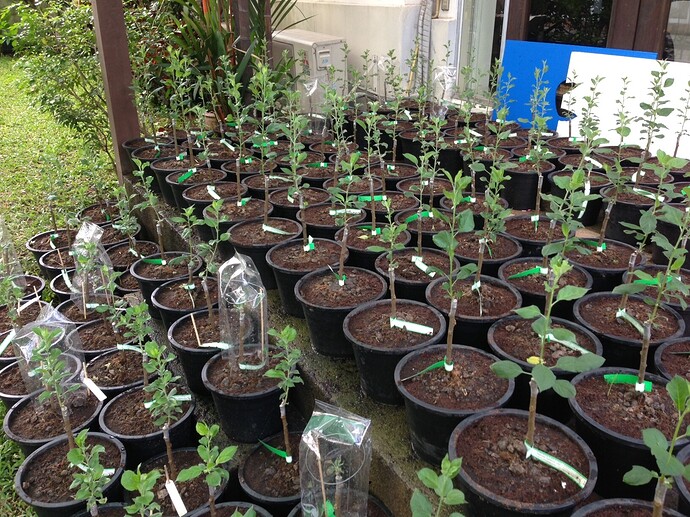 The Himalayan foothills of Himachal Pradesh have been an apple-growing area of India for years, but they have been having lots of problems. The standard-size trees are expensive to prune, thin, and pick, with the pickers climbing up into the branches to fill up a basket to hand down to a helper on the ground. The varieties are older: Red Chief, Idared, Golden Delicious. They have terrible problems with powdery mildew, which defoliates the trees and leads to smaller crops. Hail is a constant threat. The terraces have been farmed for years, and replant disease stunts any new plantings, even when allowing the ground to lie fallow for several years. 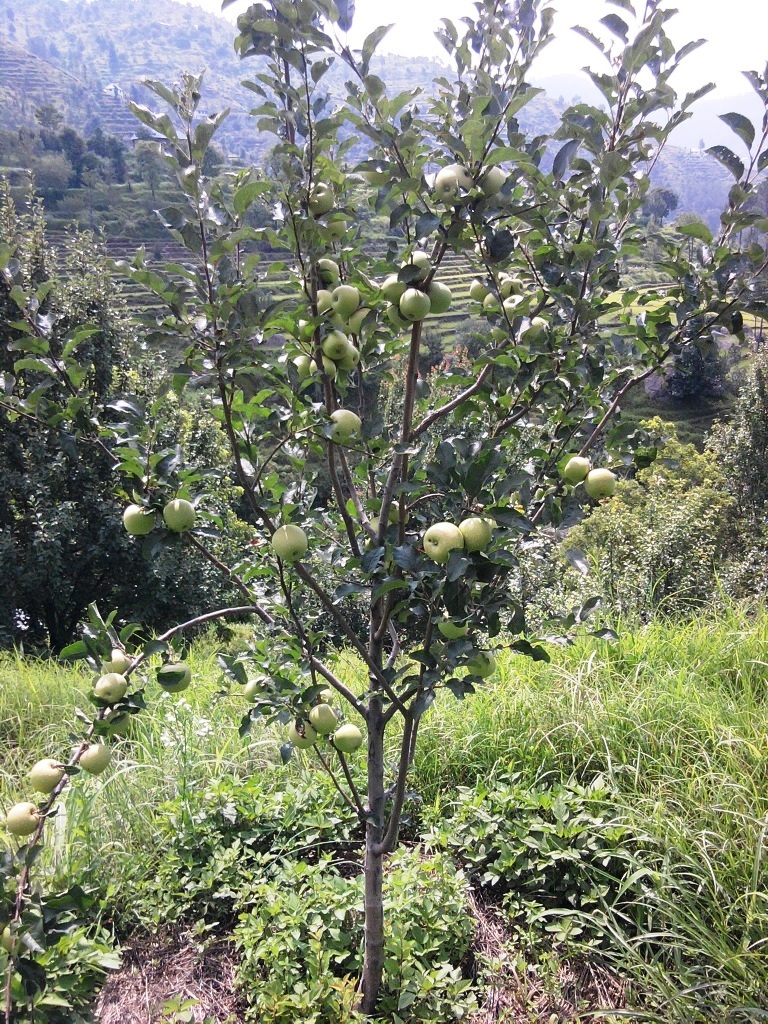 768×1024 462 KB
I’ve been working with an extension agent up there the last several years to help them modernize their apple industry, starting with farmer education. Here’s a typical extension meeting (Jon Clements from UMass Fruit Advisor said it looks like their extension meetings) 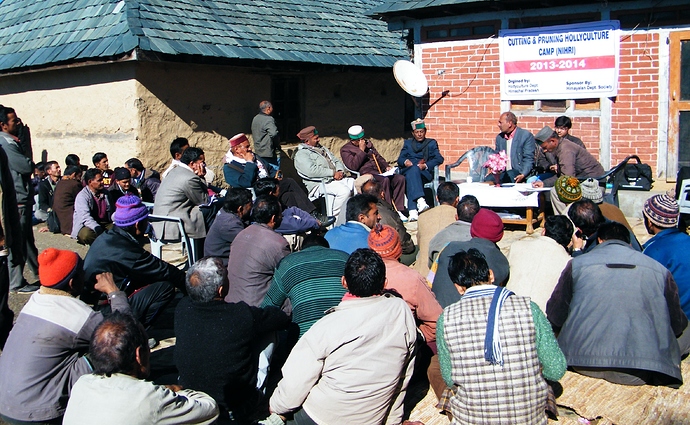 3156×1949 1.11 MB
They’ve just started to experiment with M9 rootstock planted as tall spindle, and got their first crop last fall. They are astounded by the productivity and ease of operations. 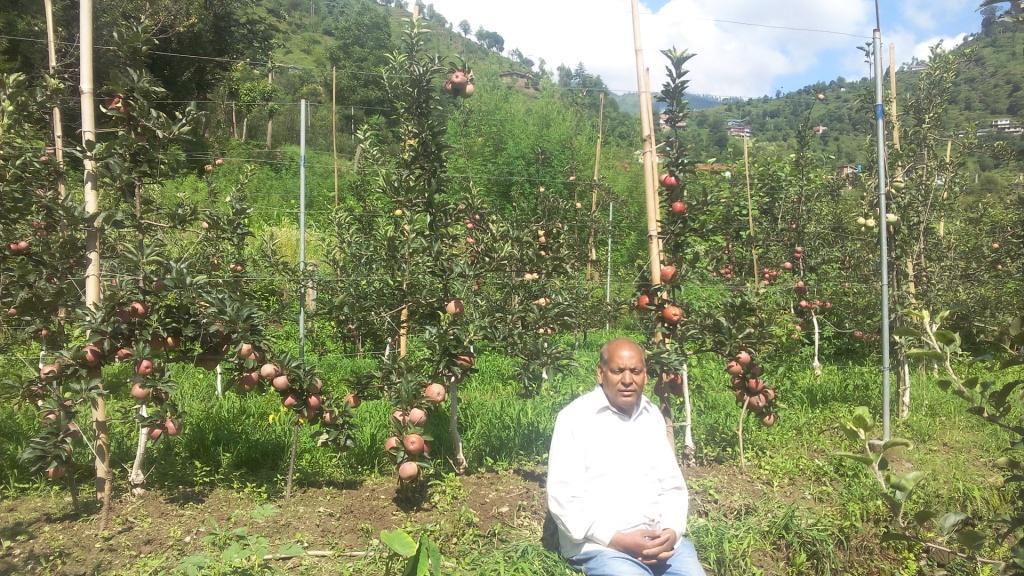 1024×576 163 KB
I was also able to send scionwood for a lot of disease-resistant and heat-tolerant varieties to Punjab Agricultural University for testing, and they’re in the second year of screenhouse quarantine there. These will be released to the extension agent in Himachal for testing there next year.
8 Likes
mrsg47 January 24, 2016, 5:33pm #12

Applenut. I have been there 16 times. The trees are not very tall at all. I’ve never seen people climbing them. Himachal is a home away from home to me.

Applenut, I was just wondering why planting those pineapple around the trees would be beneficial? Is it to discourage pigs from uprooting young trees? It can’t be for weed control, could it? I’ve got lots of white pineapples and you’ve always gotta keep on top of the weeds it seems.

Applenut, can you tell me what are those varieties? Does the lady plan to set up PYO apple farm near Bangkok. It would be very popular.

This gives me something to consider for my retirement plan, a PYO apple farm with a petting zoo. Need to convince my hubby, though. Thank you very much for your advice and great pics. It really sparks my interest.

Yup. Last about 4 months. Applenut said it is possible if the timimg is right.

Murky,
Just the opposite to you. The province where I was born is famous for pomelos so I took it for granted.

Apples are imported and it would be so cool to be able to plant them in the backyard, even just for a bragging right

I was in Phetchaburi last week. The pomelo were incredibly sweet. I wish I’d brought my refractometer.

Mrsg47, you’re absolutely right; the big trees I was thinking of are elsewhere in the Himalayas https://www.youtube.com/watch?v=XT9MYF27NSQ

I had a client in Mumbai that had some trees planted on mounds that did really well despite the monsoons, until a neighbor changed his drainage which caused this. The trees didn’t survive. The variety in the foreground is Shell of Alabama. 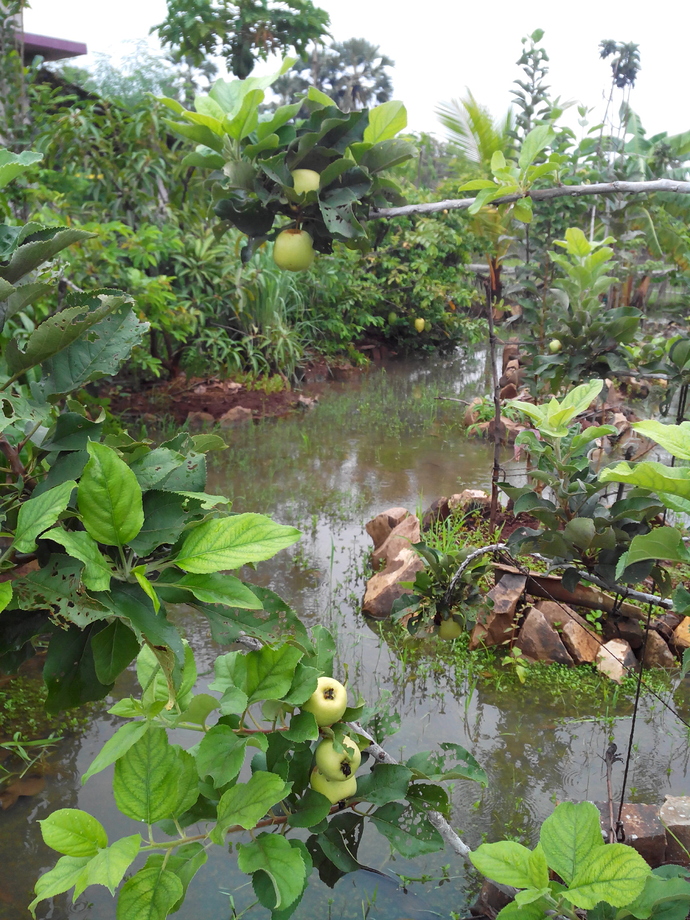 She had about a dozen disease-resistant varieties, from what I can remember Dula Beauty, Enterprise, Aunt Rachel, Anna, Shell of Alabama, Bramley, Enterprise, King David, Williams’ Pride, Red Rebel, and GoldRush. She had a little resort called Apple Tree or something like that, and wanted the trees for the grounds. I haven’t heard from her since this photo.