Apples with Vibrant Blossoms that are Good for Fresh Eating?

Two that I am aware of are Redfield and Niedzwetzkyana. However, they are said to be less optimal for fresh eating.

Red Devil is better-tasting alternative to the apples you named, and it does have very showy pink blossoms. Should be fine in 6a. In the US, trees are available here (at least).

Those two that you mention are unusual red fleshed apples. Is that something you are looking for?

The king of Apple flowers are crab apples, not only in volume but in length as well. While ornamental crab apples are beyond inedible there are some varieties that are fantastic on their own right. I have a Kerr, plan to add a chestnut, and if I find the space a trailman or a centennial. I do have a baby Redfield, it is interesting how dark it is compared to others, and the flowers are equally colored. Great for red apple jelly and red cider.

The flesh color isn’t an important factor for me. I would like an apple with edible fruit and very vibrant blossoms that will stand out amongst the white blossoms of the surrounding trees.

Redfield will certainly step away from the rest 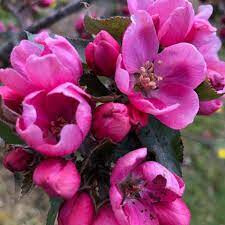 Not exactly a fresh eating apple but for baking and cider it is a favorite.

Keep in mind that the Niedzwetzkyana you mentioned is not an apple variety but an entire apple species. Even if the taxonomy doesn’t lend itself for them to be that separate the fact remains that there are a few around that are different from one another but all get called Niedzwetzkyana.

You probably want to grow apple varieties with dark pink or red flowers. In addition to Red Devil, check out the Redlove apple series. All are for fresh eating, with red-flesh at varying degrees. Among them, Redlove Odysso is supposed to be the tastiest.

I have Redlove Calypso, flowers are beautiful dark pink color. Leave color is maroon in the spring. 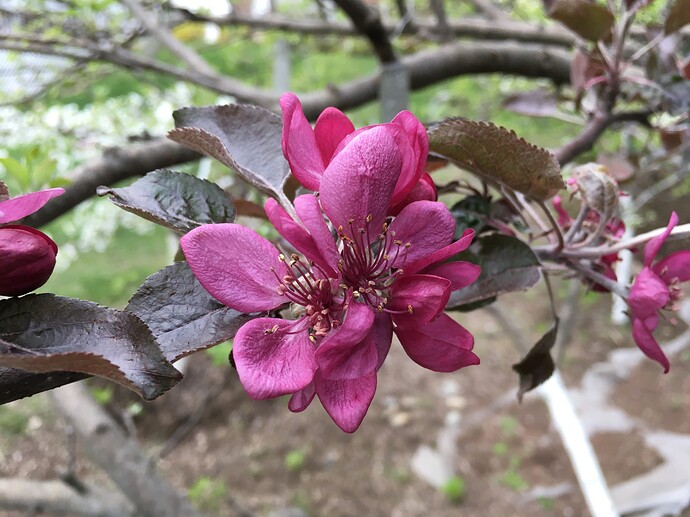 Thanks for all of the good suggestions thus far.

I’m trying to cross breed some…that may taste good and look good and have pretty blooms. But, could be years for results.
Taste good is relative and is an individual thing. Some folks like a Red Delicious and some like a Granny Smith or a Winesap.

I have first crop on Redfield and later this year hope to decide personally if it is good eating (or just a cider and jelly apple). I have a Red Devil I grafted, but not sure about when it willl bloom or fruit. Odysso is down to just one fruit…so we’ll see if I get to taste it this year…it sure is pretty enough. Baya Marisa is supposed to be good to eat fresh…but I keep killing that variety. Ditto Rubaiyat.

Maybe in 5 years I’ll have a new hybrid better than any current red fleshed … or someone else may.

I have first crop on Redfield and later this year hope to decide personally if it is good eating (or just a cider and jelly apple).

My Redfield was a baby whip last year and now is taking its sweet time to get going. I’m a few years out on getting a single apple…

I have my eye on cider, both hard and soft. Most table apples are just sweet, lacking the tannins and even acidity for a well rounded cider of either type. Redfield is one of those rare apples that can pull being a single variety hard cider; most need to be blended in order to balance the end result.

Understood. Redfield I’ve had about 6 (I forget exactly) years…a 2-year old whip when purchased…bloomed last year and apples got froze, this year have a crop. It’s on M-111. not quick to bear.
And deer have eaten, but not the central leader…so it’s tall enough to be safe finally.
Few apple trees are as pretty as Redfield in bloom.
(Not even it’s daddy…which is it’s pollinator this year…nothing else was in bloom as 90% blooms opened.)